Superstore Cora in France is worth the trip for groceries 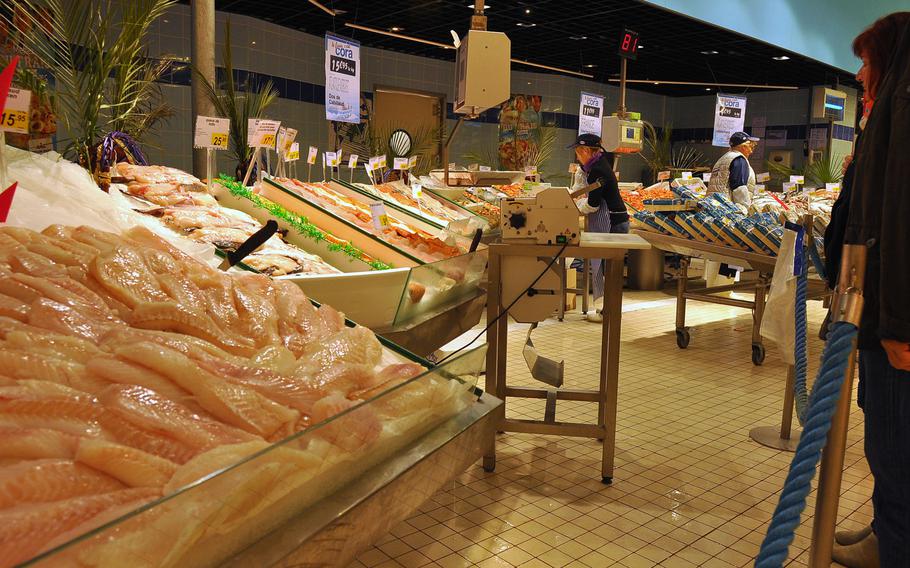 The seafood section at Cora, a giant retail and grocery store in Forbach, France, offers a variety of fresh fish. Customers stand in line and get a ticket to place a fish order. (Jennifer H. Svan/Stars and Stripes)

The seafood section at Cora, a giant retail and grocery store in Forbach, France, offers a variety of fresh fish. Customers stand in line and get a ticket to place a fish order. (Jennifer H. Svan/Stars and Stripes) 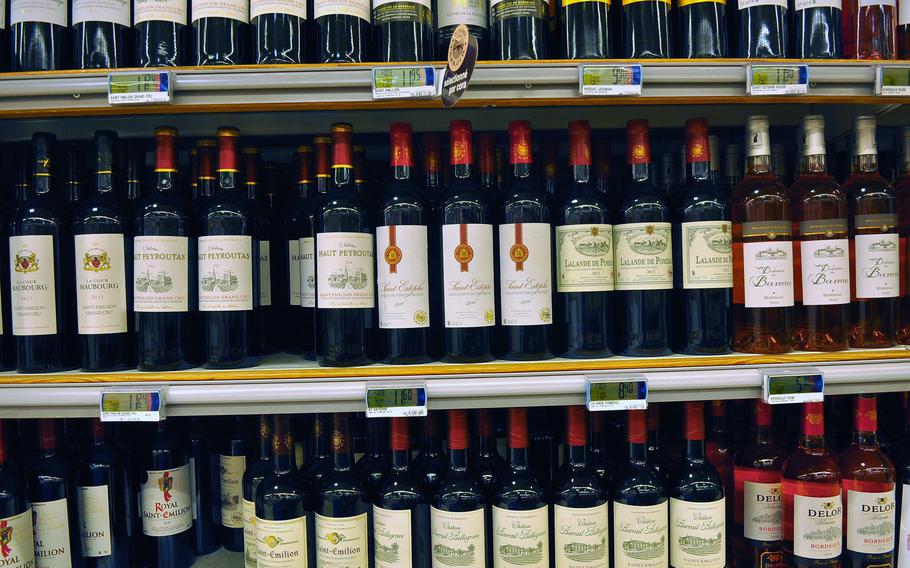 The wine selection at the Cora super store in Forbach, France, is vast and mostly French, sold by region. (Jennifer H. Svan/Stars and Stripes) 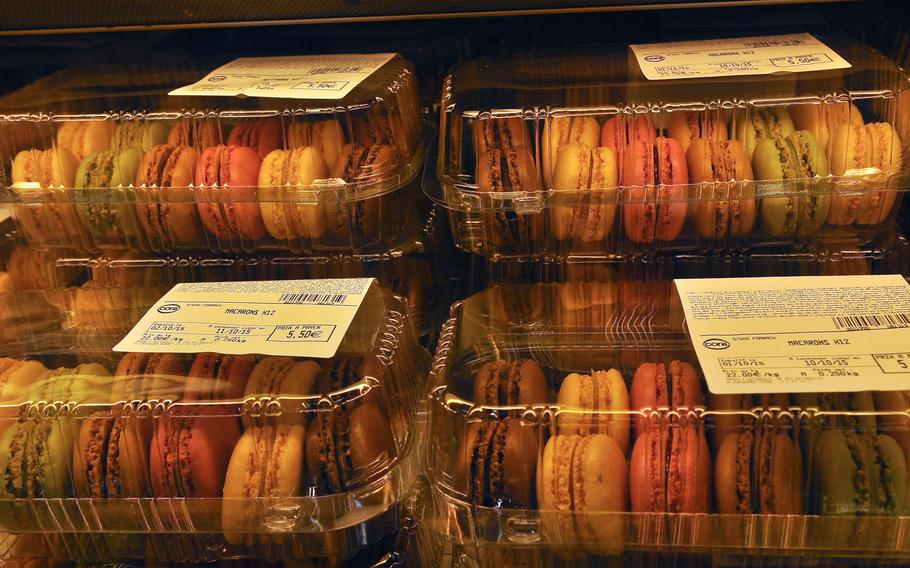 Macarons are not so easy to find in Germany. But at Cora, just over the German border in Forbach, France, the sweet meringue-based confections are plentiful. (Jennifer H. Svan/Stars and Stripes) 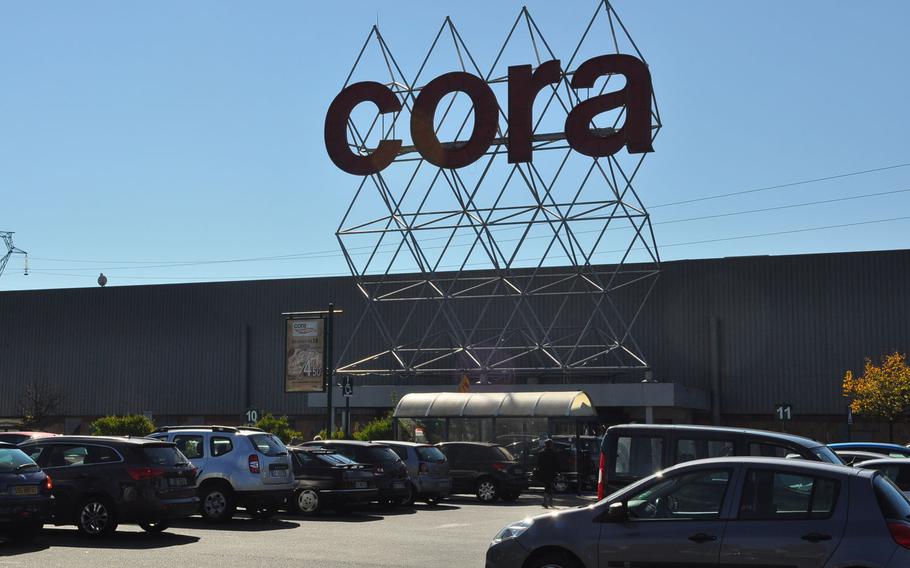 Cora, a Belgian-owned chain of super stores, is often described as Europe's version of Wal-Mart. That's not entirely accurate, considering Cora's grocery section by far outrivals that of its U.S. cousin, offering numerous varieties of cheese, bread, produce, wine and seafood, among other items. (Jennifer H. Svan/Stars and Stripes) 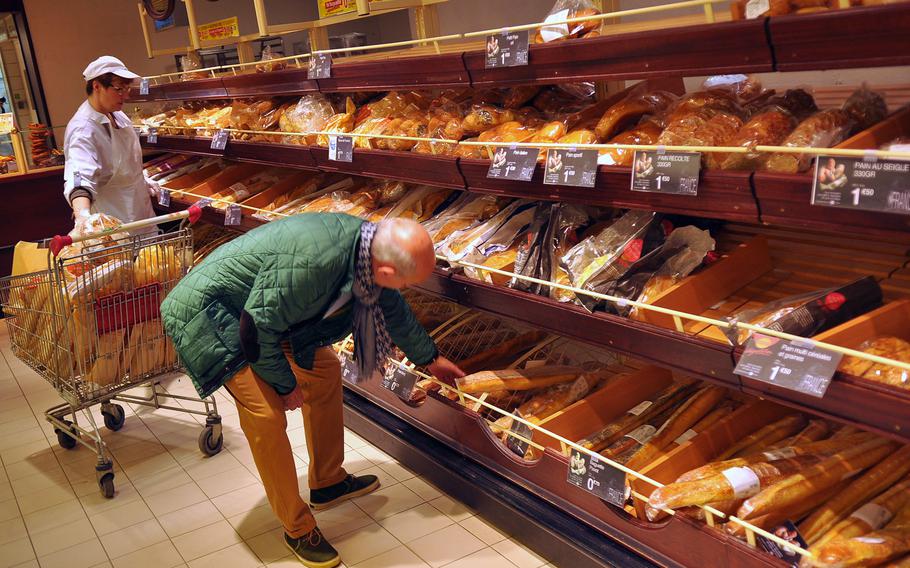 A customer reaches for a baguette in Cora's bakery section. Besides baguettes and an assortment of loaves of bread, the super store in Forbach, France sells French pastries, cakes and rolls in its bakery section. (Jennifer H. Svan/Stars and Stripes) 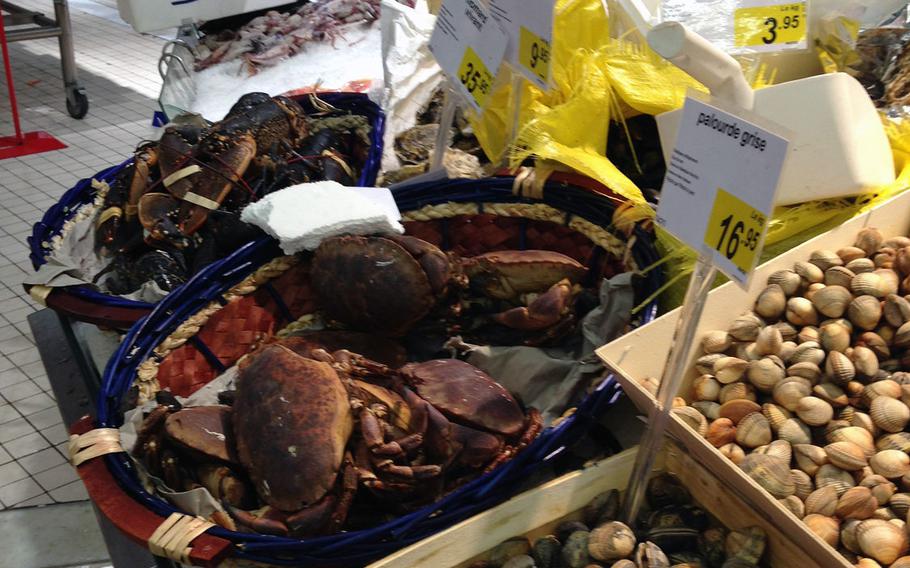 Gray clams, crabs and lobsters are among the sea critters for sale at Cora, a giant retail and grocery store located in several European countries. The closest one to Kaiserslautern, Germany, is in Forbach, France. (Jennifer H. Svan/Stars and Stripes) 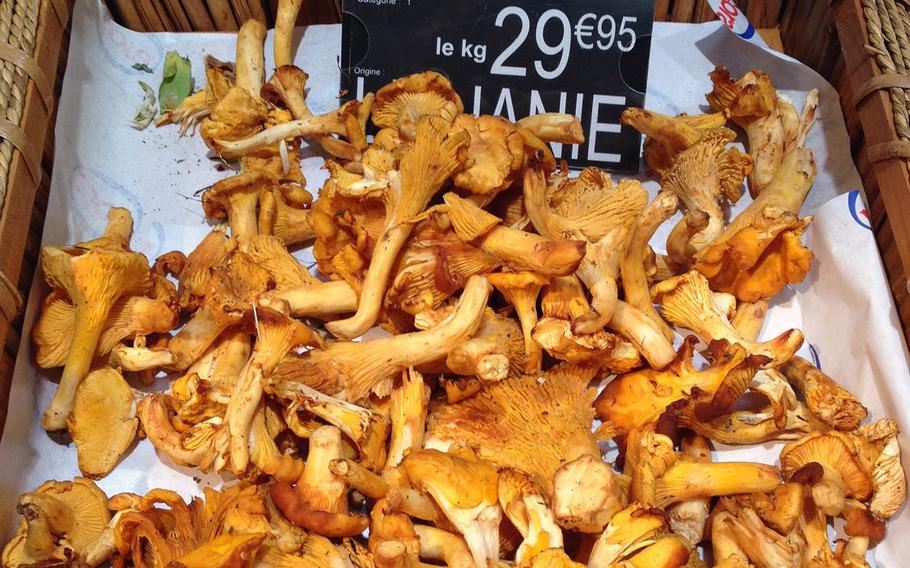 Girolle mushrooms — also known as golden chanterelles — are one of the seasonal offerings sold in the produce section of Cora, a super store. (Jennifer H. Svan/Stars and Stripes) 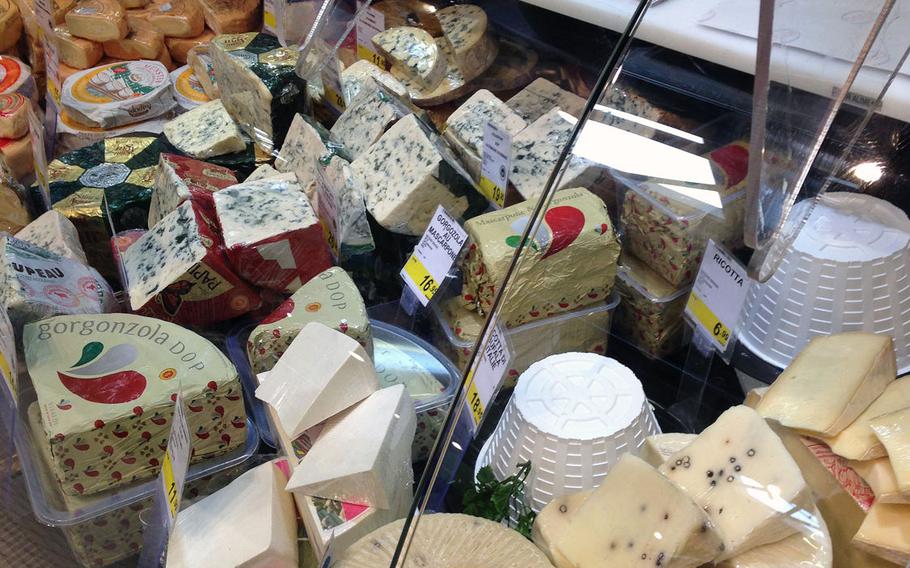 Cheeses are a good thing to stock up on when making a trip to Cora. The closest store to Kaiserslautern, Germany, is just across the border in Forbach, France. (Jennifer H. Svan/Stars and Stripes) 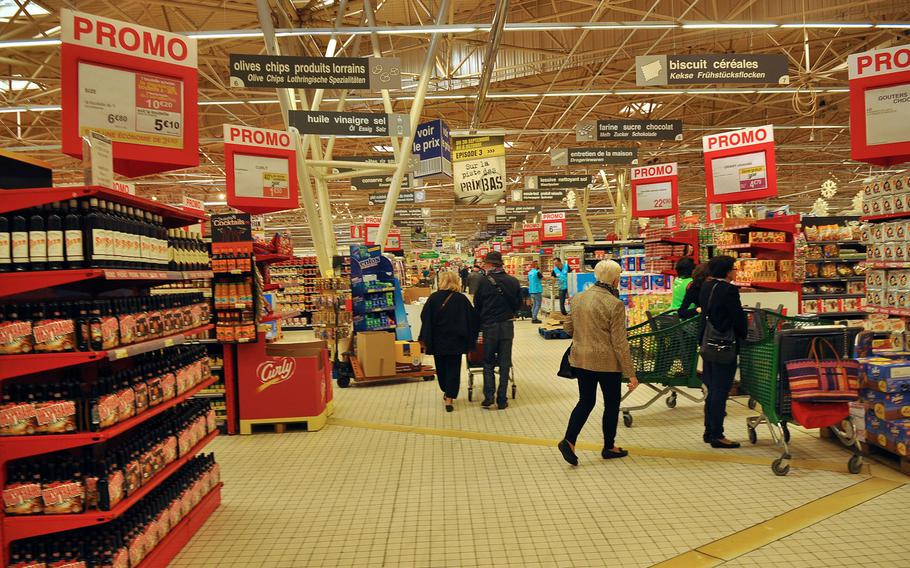 Shoppers walk the aisles at the Cora retail and grocery store in Forbach, France, on Friday, Oct. 2, 2015. (Jennifer H. Svan/Stars and Stripes) 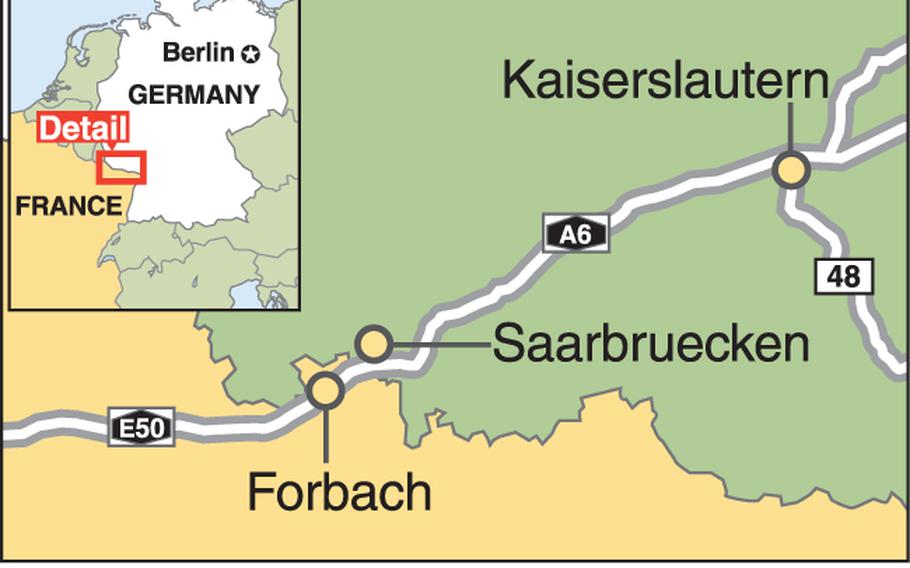 When Americans living in Kaiserslautern speak of Cora, the giant grocery and retail store just over the German border in France, it’s usually with a gleam in their eyes.

However, a weekend road trip to Cora four years ago with a 7-year-old, a baby and mother-in-law in tow to see if Cora lived up to the hype ended badly.

I remember flies crawling over the bread in the bakery; crowded, busy aisles; a stale smell that permeated the store; and feeling completely overwhelmed by loads of cheap merchandise. A leaky baby diaper truncated our shopping trip before we made it to the wine section.

The Belgian-owned chain of superstores is often described as Europe’s version of Wal-Mart.

I swore I wouldn’t go back. Until I did.

The second time, I went on a weekday by myself. This time, I tapped into the allure behind the hype.

Cora is worth the hour drive from Kaiserslautern, but only for food products and drinks. Its grocery section is more varied and international than any super Wal-Mart’s and most typical German food chains, with prices to match.

In the bakery, there are more bins of French baguettes than a family of four could consume in a year. Some sweet old women who didn’t speak English pointed to the cornets with approving smiles. I bought four of the flaky, cream-filled pastry shells. Seeing there were no flies buzzing around the bread, I bought a hearty brown loaf and a soft white one.

Filling the seafood section are crab legs, shrimp, mussels from Holland, Spain and France, slabs of raw salmon and cod filets and still-moving lobsters on ice, among other items. I didn’t have an ice chest with me — a good thing to have for perishables — so I just browsed and felt sorry for the lobsters.

French wine dominates the wine department. Bottles are sold by region, ranging from Alsace to the Rhone Valley. I picked up a bottle of Bordeaux merlot originally priced at 29.90 euros for 12.95 euros.

Cora offers a few varieties of Belgian beer at heavily discounted prices. A 15-pack of Blonde Leffe was 9.10 euros, a deal sweetened by a “buy two, get one free” offer.

Cheese aficionados won’t be disappointed, either. Dozens of soft and hard cheeses line the cheese counter, such as Swiss Appenzeller, French Pizzalor and British Blue Shropshire.

An aisle is dedicated to chocolate. If you have a hankering for meat and not sweets, you can choose from dozens of sausage varieties, lug home a leg of smoked lamb or purchase a skinned lapin (rabbit), eyeballs included.

A word to the wise: Most of the store clerks don’t speak English, and most product labels are in French.