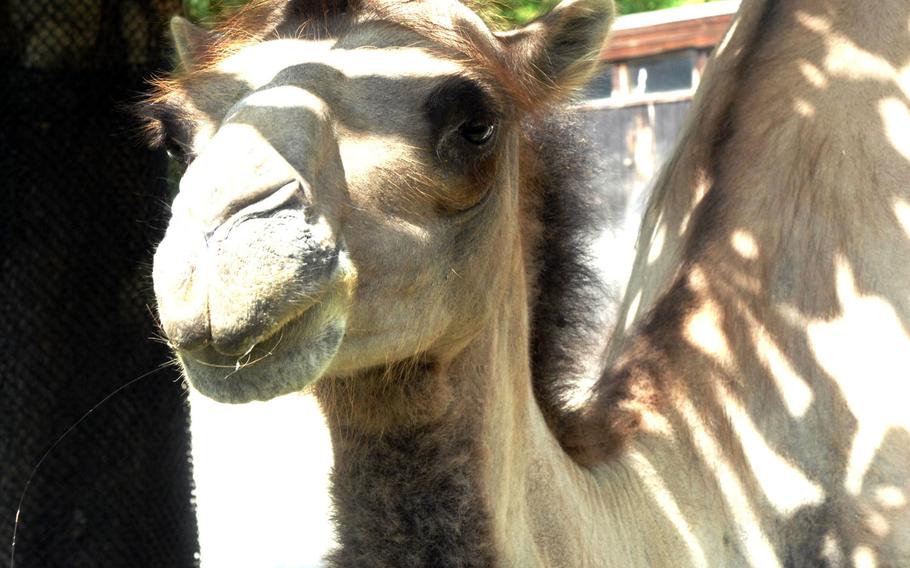 A camel regards the camera at Karlsruhe Zoo in Karlsruhe, Germany. The zoo boasts 150 species of animals. (Gregory Broome/Stars and Stripes)

A camel regards the camera at Karlsruhe Zoo in Karlsruhe, Germany. The zoo boasts 150 species of animals. (Gregory Broome/Stars and Stripes) 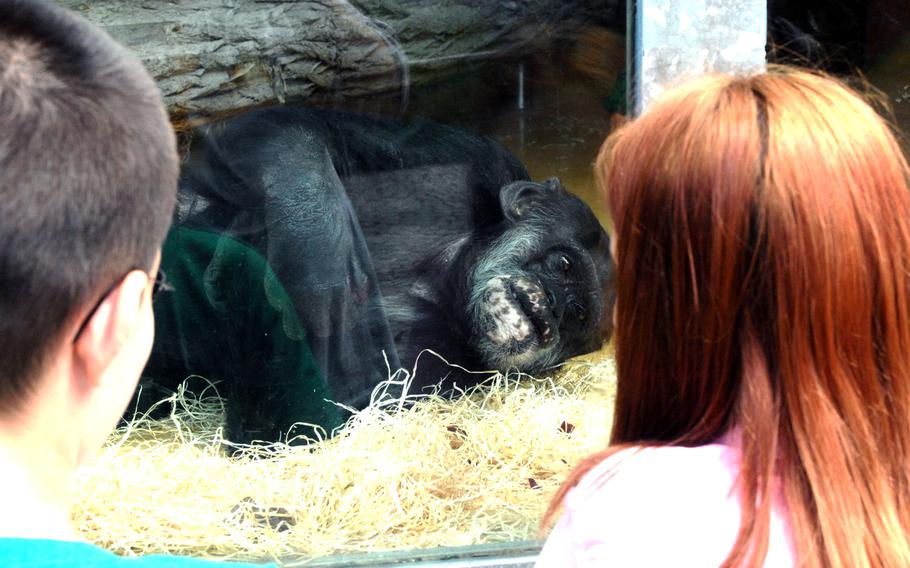 Two young visitors interact with an ape at Karlsruhe Zoo. The zoo is a sprawling urban green space similar to Kaiserslautern’s familiar Gartenschau or Mannheim’s celebrated Luisenpark, but it has way more animals than either. (Gregory Broome/Stars and Stripes) A hippo descends into the water at Karlsruhe Zoo in Karlsruhe, Germany. The zoo's sprawling grounds offer a respite from the ongoing construction that is roiling the rest of the city. (Gregory Broome/Stars and Stripes) A Eurasian eagle owl peers out from its enclosure at Karlsruhe Zoo in Karlsruhe, Germany. (Gregory Broome/Stars and Stripes) 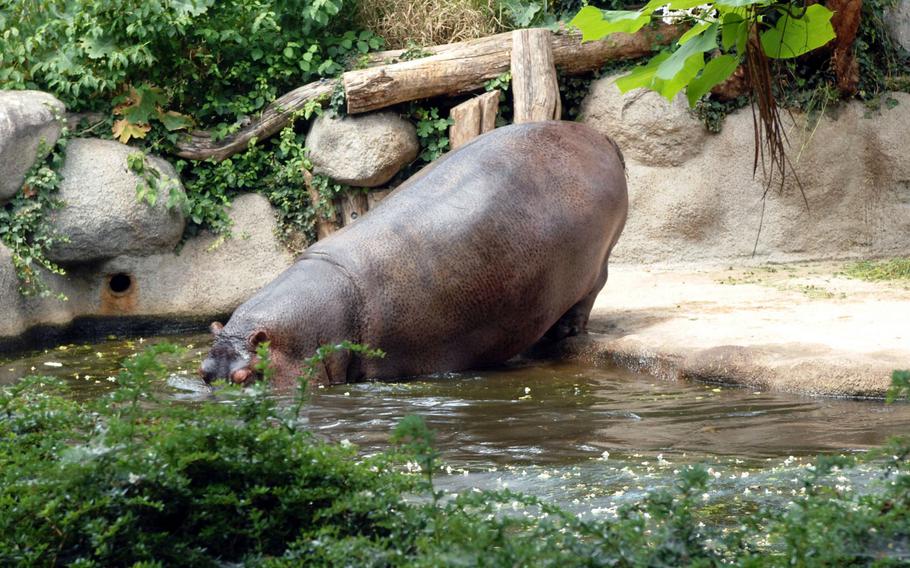 A hippo descends into the water at Karlsruhe Zoo in Karlsruhe, Germany. (Gregory Broome/Stars and Stripes) 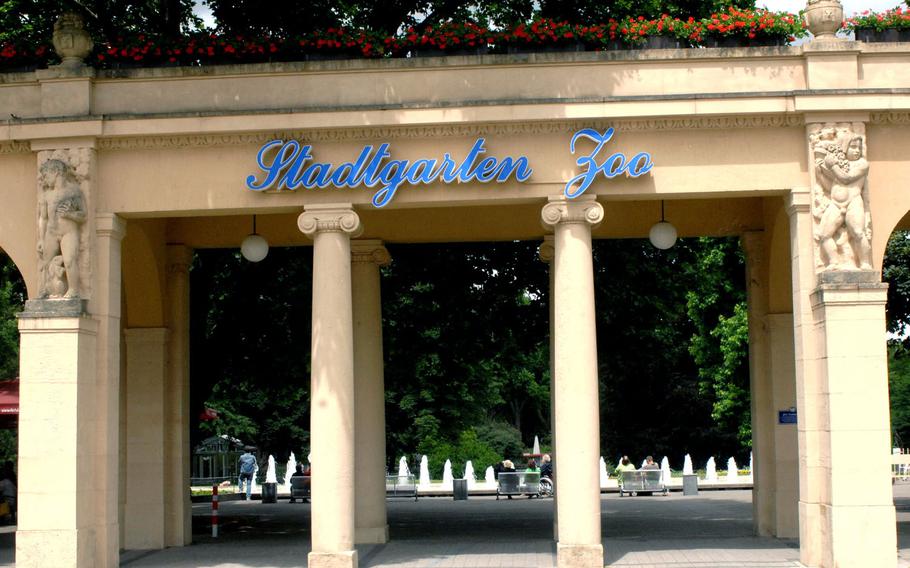 The entrance to Karlsruhe Zoo in Karlsruhe, Germany, is just a few steps from the city's main train station. The zoo's sprawling grounds offer a respite from the ongoing construction that is roiling the rest of the city. (Gregory Broome/Stars and Stripes) As a rule, there are plenty of compelling reasons to visit Karlsruhe, a prominent southwestern German city between Kaiserslautern and Stuttgart. Unfortunately, at the moment, there are at least as many reasons to leave.

The town is under construction. And I don’t mean the scattershot assortment of orange cones and metal fences you’ll encounter in most European cities of a certain size. I mean some serious, game-changing construction. Thick layers of dust and pallets of bricks. Gentle rolling hills of debris and blue tarps. Temporary wooden walkways suspended precariously over unfinished tunnels. It’s basically a life-size version of the board game Mouse Trap.

There is, however, one worthy attraction left untouched by the chaos: the Karlsruhe Zoo.

The zoo is a sprawling urban green space similar to Kaiserslautern’s familiar Gartenschau or Mannheim’s celebrated Luisenpark, but it has way more animals than either. It’s a proper, full-fledged zoo, with about 150 species of animals. The roster includes elephants, giraffes, hippos, big cats and sea lions, as well as an impressive house of monkeys and apes. Around those main attractions lie large enclosures of mountain goats and farm animals offering welcome moments of humor and personality to complement their more majestic neighbors.

The zoo grounds are defined by two sizable lakes, one at the south and another at the north end, and the bodies of water offer opportunities for relaxation. Ride a boat down the meandering stream that connects the two lakes, floating past fields of flowers and under scenic wooden bridges. Grab a bratwurst and park your party at water’s edge to watch the fish and waterfowl. Or simply walk the paths that circle the water, crossing over the occasional bridge as you wander.

But the best thing about Karlsruhe Zoo, as any real estate agent will tell you three times, is its location.

In Europe, many city attractions are described as within “walking distance” from the central train station, and that always sounds so convenient. But any two places not separated by a gulf of water, deep ravine or unpassable mountain are technically within walking distance of each other. The Karlsruhe Zoo, however, is so close to the central station that you might mistake it for a train platform filled with unusually furry passengers. You can actually see the zoo gates from the lobby.

Given the dust and disorder that await you further into the city, this arrangement is fortunate. Spend a few hours wandering the considerable grounds of the zoo, then catch your return trip without running the risk of plummeting through an uncovered manhole downtown.

Eventually it will be worthwhile to schedule an entire day experiencing Karlsruhe at its best. For now, however, just go to the zoo and get out of there.

Karlsruhe Zoo DIRECTIONSFrom Kaiserslautern, take Autobahn 6 east, continue south on Autobahns 61 and 65 and cruise 65 right into Karlsruhe. From Stuttgart, Autobahn 8 will get you there. Park at the Hauptbahnhof, or main train station, and walk right into the zoo. An even better idea: Take the train to Karlsruhe.

TIMES8 a.m. to 6 p.m. through September. Hours contract as the days get shorter, all the way to a 4 p.m. closing time in December.

COSTSA day ticket costs 7.50 euros ($10.28) for adults and 3.50 euros for kids under 15. Discounts for seniors and students are available. A family ticket for two adults and up to four children costs 18.50 euros.

FOODNothing spectacular, but you won’t have to wander far before encountering a cafe or other eatery. The train station adds to your options.

INFORMATIONThe city of Karlsruhe has a quality website at www.karlsruhe.de; find zoo information on the menu under “Visit Karlsruhe” and “Leisure and Recreation.”