Almond blossoms add flair to the German Wine Route, if you know where to look 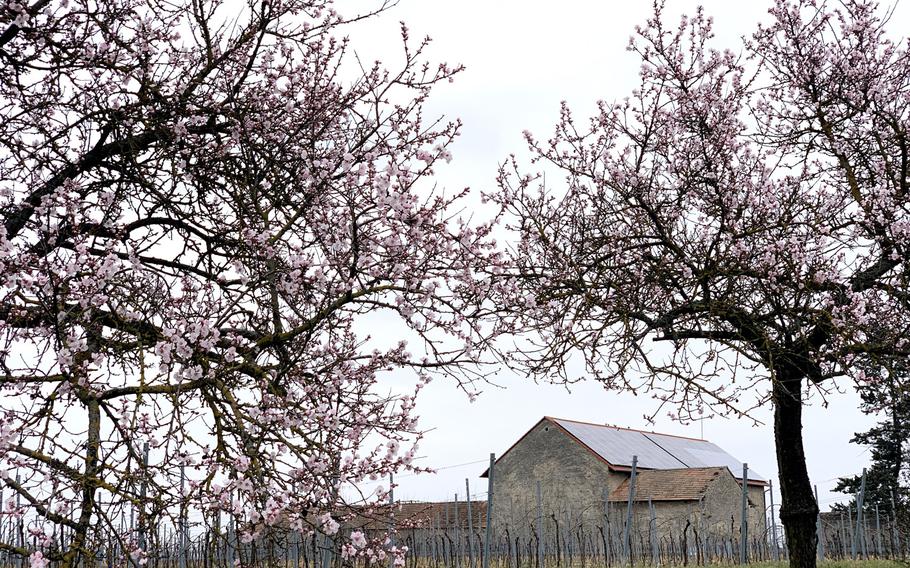 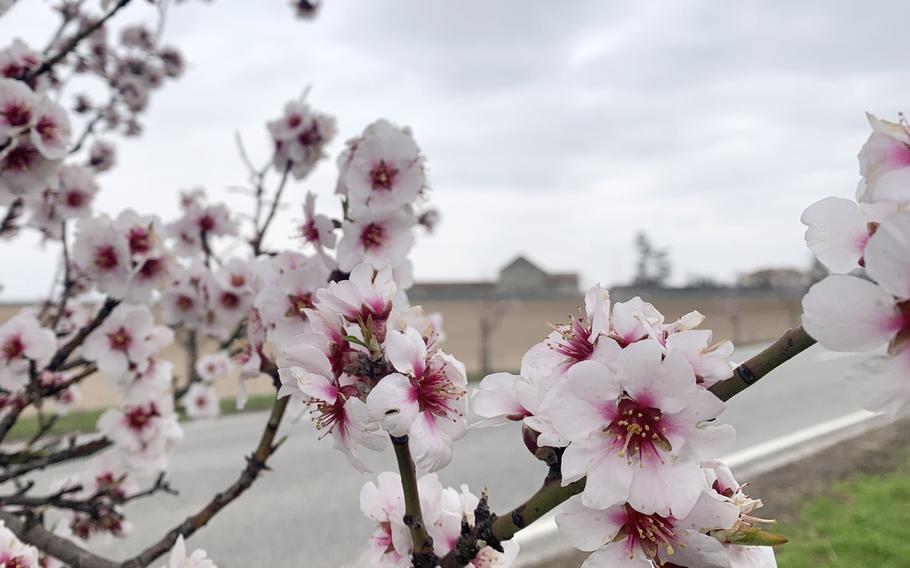 Buy Photo
Almond trees in bloom March 23, 2021, along the German Wine Route on the edge of Bockenheim an der Weinstrasse, northeast of Kaiserslautern. (Chad Garland/Stars and Stripes) 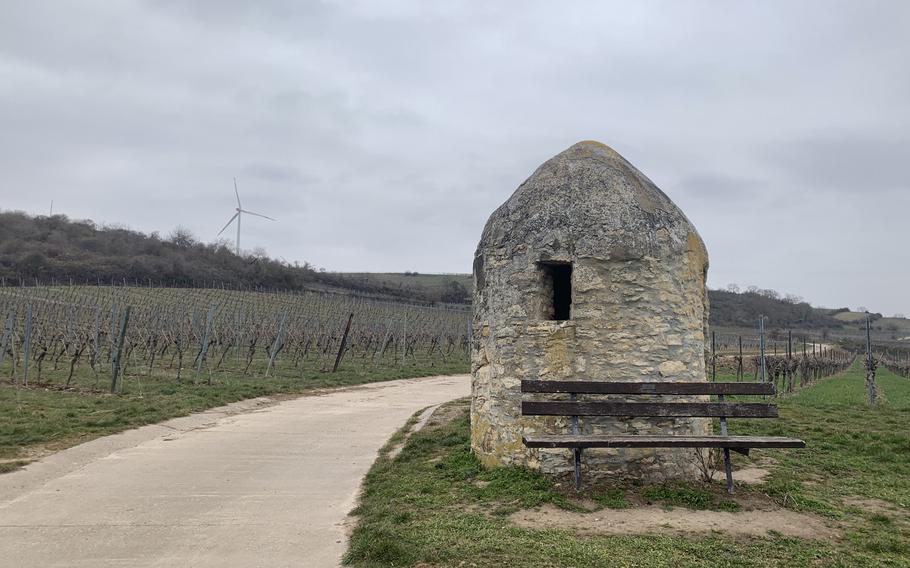 Buy Photo
A stone shelter on a path through the vineyards north of Bockenheim an der Weinstrasse, about 28 miles northeast of Kaiserslautern, March 23, 2021. (Chad Garland/Stars and Stripes) 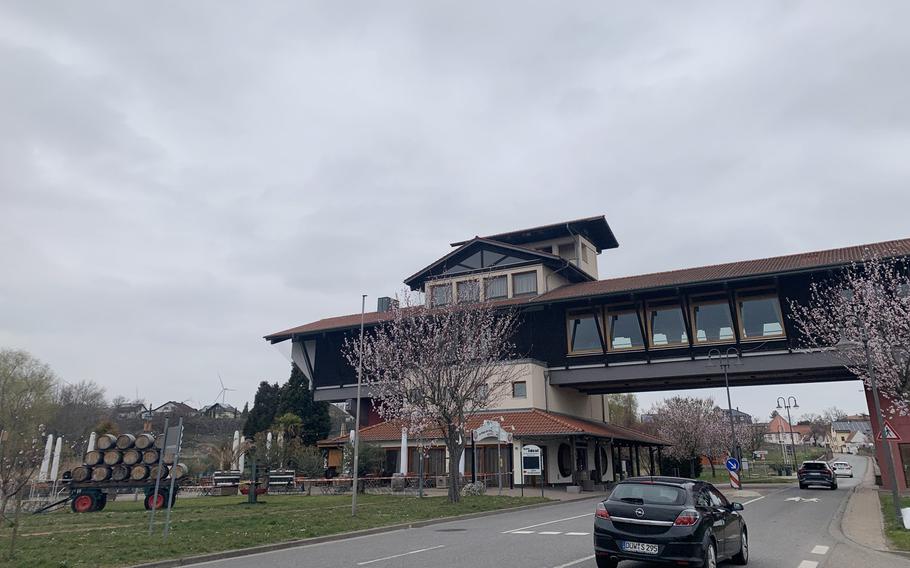 Buy Photo
Blooming almond trees flank the road March 23, 2021, near the Cafe Ideal and the House of the German Wine Route in Bockenheim an der Weinstrasse. (Chad Garland/Stars and Stripes)

I came to the northern end of the German Wine Route in late March expecting what one website described as a “flurry of white and pink budding flowers,” but I was a bit underwhelmed.

My journey began as a search for some new scenery for a good, brisk nature walk, one of the few pleasures of The Before Time that remains at least viable in Pandemic Life, if not indispensable.

There’s nothing too special about the route I take up a steep grade in Kaiserslautern every evening to mark the transition from the daily work-from-home period to the nightly Netflix-and-chill time. A quick look around the internet led me to believe the Palatinate Almond Trail would be a paved path through rolling hillside vineyards lined with rosy-white blooming trees.

I can’t say that’s not something you’ll find somewhere along the 60-mile route, but that’s not what I found one recent Tuesday in the picturesque town of Bockenheim an der Weinstrasse, about 28 miles northeast of Kaiserslautern.

A building spanning the road in Bockenheim’s north marks one end of the German Wine Route and in The Before Time, when the almond blossoms mark the awakening of nature each March and April, villages along the scenic drive celebrate with festivals featuring wine (of course) and almond-based culinary delights, which for obvious reasons are not happening this year.

Google Maps led me from the Bockenheim-Kirkenheim train stop, across town and under the building north to what I thought would be the start of a well-marked trail, but which turned out to be a rather arbitrary spot on the side of the road. The few cafes I passed were closed, including one at the wine gate, and I found nary a roasted almond or mandelkuchen for sale. Instead, I grabbed some pretzels and water at a small gas station.

Knowing that getting here would cost me a two-hour train ride, my first since COVID-19 came on the scene, I’d “researched” the trip by ogling a few recent Instagram photos tagged #pfalzermandelpfad to ensure the buds had already blossomed.

It’s not that there were no almond trees, and it’s not that they weren’t in bloom, but along this part of the trail they seem to be mere decoration lining a busy road. In all directions on either side stretched countless neat rows of knotty, bare grapevines — a modest sign of good things to come in one of Germany’s largest wine regions.

I veered off into one of the vineyards, lured by the sight of a rustic shed and a path wending its way up a hill. What followed was an invigorating hourlong walk past brambles full of chirping birds and furrows where rabbits played.

It was a cloudy weekday and almost no one else was on the trail, despite relatively mild temperatures. A runner passed me shortly after I’d stopped to take pictures of a stone shelter resembling an unremarkable decorative object I’d made in a high school pottery class. A bench there and elsewhere along the way provided inviting rest spots.

I chose to stop at the top of the hill and munched on a pretzel while overlooking Bockenheim’s distant cluster of tile roofs. I admired the stark beauty of leafless trees that marked the landscape and offered perches for flocks of small birds and soaring ravens who’d swoop down to pick over the ground.

Even without the anticipated almond trees, the area would doubtless be splendid when the vines are freighted with green canopies and ripening fruit, or when their leaves show their colors in autumn.

I looped back to the road and meandered to the train station. Again seeing no obvious signs for the almond trail, I checked my earlier Instagram search, this time noting the tagged locations of the more beautiful photos.

The route stretches from Bockenheim to Schweigen-Rechtenbach on the French border, and posts from Rhodt unter Rietburg, Gimmeldingen and Edenkoben seem to show the type of almond tree-lined path I’d hoped to find, each within about 30 miles southeast of Kaiserslautern (and shorter train rides than Bockenheim).

A website that in normal times shares information about the events of each spring’s “almond weeks” also hosts a trail brochure in German and other info, including links to circular walking routes in Edenkoben and nearby Maikammer. It’s available at mandelbluete-pfalz.de.

I’m sure the lockdown will give me another reason to venture out to one of those areas. There’s not much else to do.

Directions: From Kaiserslautern to Bockenheim an der Weinstrasse, head northeast on A6 and then take B271, exit 19-Grunstadt near Kirchheim an der Weinstrasse and follow it north about 5 miles. There’s minimal parking and local trail and bird-spotting information at a turnoff just north of town, where the trail through the vineyards begins.

Food and drink: Café Ideal at the nearby House of the German Wine Route landmark, offers snacks, salads, burgers and more from 3 p.m. most weekdays and from 11 a.m. on weekends. There are wineries everywhere, though tastings have been restricted.