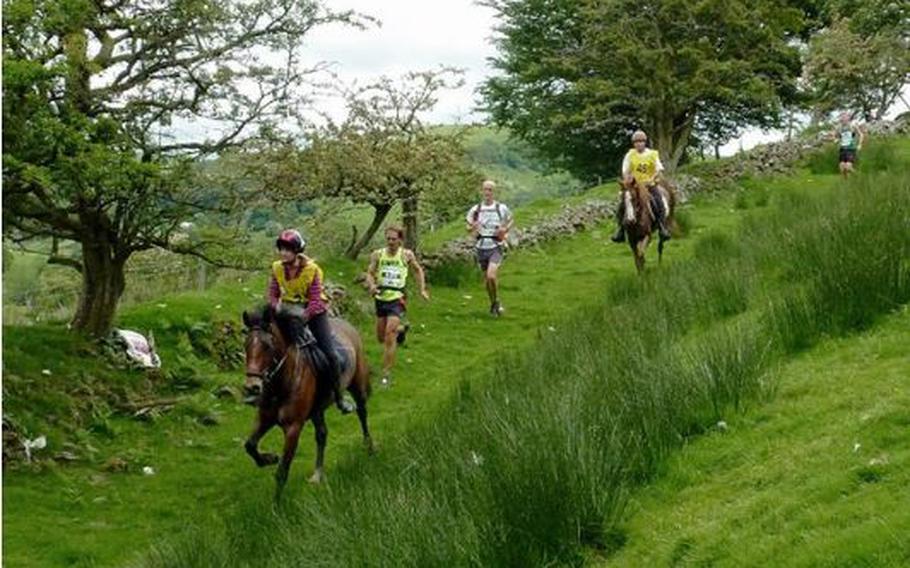 See which species is fleeter of foot at the Man v Horse race in Llanwrtyd Wells, Wales, on June 8. (Roger Kidd/rove.me)

Golden Roof ChallengeLocation: Innsbruck, AustriaDate: June 8 (from6:45 p.m.)These pole-vaulting championships take their name from the fact that they are staged next to a city landmark, the famed Golden Roof, in the heart of Innsbruck’s Old Town. Twenty top athletes compete in the world’s first in-city athletics series on a contraption known as “The FlySwat” in front of thousands of spectators. This year’s edition is special in that the city is recalling the 500th anniversary of the death of Emperor Maximilian, builder of the golden roof.Admission: Free

Summer Beer Lovers’ FestivalLocation: Espace Tivoli (Place du Marche), Liege, BelgiumDates: June 6-10Liege bills itself as a “Beer Lovers’ City,” and to live up to this label, it hosts beer festivals throughout the year. This particular event sees some 30 artisanal brewers from Wallonia come together to introduce their painstakingly created craft brews. On Sunday, around 1,500 runners, some costumed as superheroes, will descend upon the town to participate in its annual Beer Lovers’ Marathon. Sign-up is no longer possible, but spectators can enjoy the ambiance.Admission: Free

Dragon Boat FestivalLocation: Peterborough Rowing Club, Thorpe Meadows, PE3 6LN Peterborough, EnglandDate: June 8With a drummer at the front beating time and a helmsman at the tail keeping it on course, teams of up to 10 people compete along a course watched by several thousand spectators. Up to 52 teams are expected to take part in the races. On shore, food stalls, live music, a beer garden, sports and games offer fun for all family members. Proceeds from the event benefit cancer research and a local hospice.Admission: Free

Wine FestivalLocation: Maxplatz, BambergDates: June 5-10Germany’s beer capital can do wine, too. The tradition of winemaking in Bamberg, which dates back to at least the 11th century, has recently been resurrected, with a vineyard at the former Benedictine Abbey on Michaelsberg once again in production. Sample the Silvaner white wines being made from these grapes or any number of other Franconian wines. Food and drink stands, along with musical entertainment, round out the offerings.

Bierborse / Beer MarketLocation: Rheinufer, Deutsche Eck, Koblenz, GermanyDates: June 7-10 (3 p.m-midnight Fri.; 11 a.m.-midnight Sat. and Sun.; 11 a.m.- 8 p.m. Mon.)Some 700 different types of beers from around the world, including some rather exotic choices, are available for consumption on the spot or to take home, while numerous food stands serve up the perfect savory fare to accompany. The lively gathering benefits from its pretty setting under plantain trees by confluence of the Rhine and Mosel rivers. Admission: Free

Man v Horse in WalesLocation: The Neuadd Arms Hotel, The Square, LD5 4RB, Llanwrtyd Wells, WalesDate: June 8 (race begins at 11 a.m.)Could a man outrun a horse in a fair contest? It’s happened not once but twice in this quirky test of endurance. In this competition between horse and man, runners and riders will traverse 21 miles of rough terrain and steep gradients. The men and women runners will set off at 11 a.m., 15 minutes before their equine competition, and in just over two and half hours, the first of the racers will cross the finish line. Last year’s contest saw a horse win out over his closest human competition by a mere 27 seconds. It’s too late to register for the race itself, but as runners need not be professionals, there’s always next year. It’s also possible to run as part of a relay team.Admission: Free