Europe's fermented foods aren't for the faint of heart 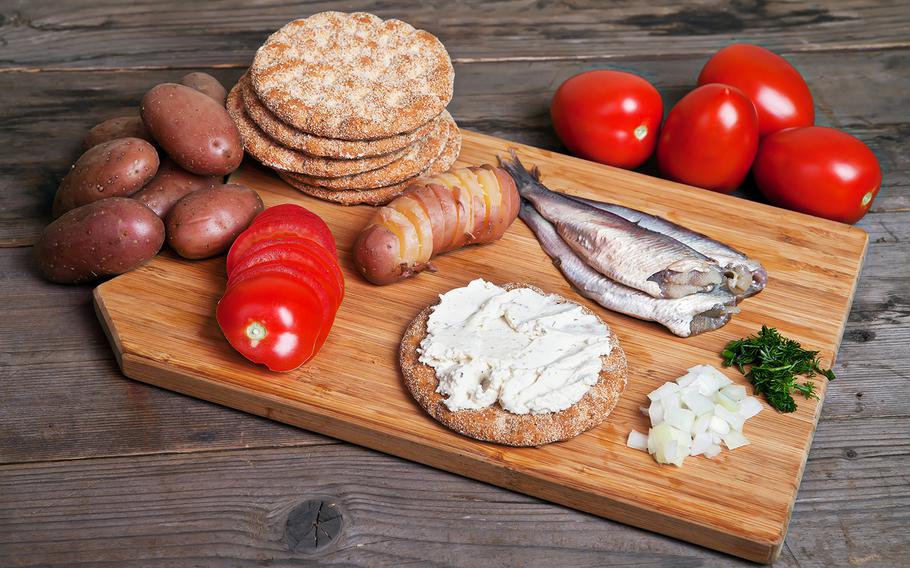 Fermented herring, often served with items such as potato and tomato, is a delicacy in Sweden. Its smell is so strong that it's often consumed outdoors. (Getty Images/iStock)

Some travel experiences are worth the taking not necessarily because of their enjoyment factor, but rather the stark differences they present from our own everyday reality.

Take, for example, the Icelandic dining tradition known as Thorablott. The celebration which takes place during the old Norse month of Þorri is a mid-winter homage to traditional dishes reminiscent of a time before the import of fresh produce year round meant you had to make do with foods that would keep.

Typical treats on the Thorablott table include smoked lamb, dried fish, blood pudding, whale blubber, singed sheep’s head, rams’ testicles and hákarl, the notorious fermented shark that smells and tastes of ammonia. The Icelandic schnapps known as Brennivín helps to wash it down.

While it’s perhaps more typical to indulge in this feast in the company of friends at home or at a club, travelers curious enough to wish to partake in the treats of a Thorablott table will find, at least in non-pandemic years, a handful of restaurants in Reykjavik serving up the staples, to include the Café Loki. Thorablott is celebrated Jan. 24-Feb. 20 in 2021.

Iceland isn’t the only country that offers travelers in Europe the chance to indulge in fermented or what might appear to those outside the culture as downright rotten foods.

In Greenland, a dish by the name of Kiviak makes good use of an abundant local sea bird. A dead seal serves as the vessel into which the carcasses of hundreds of auks are firmly packed. The seal and its contents are sewn up tight and buried under a heap of rocks, where they are left to ferment for up to a year and a half. By this time, the birds’ innards will have thoroughly liquefied, so removing their heads and sucking out the juices is one way to enjoy. Kiviak is considered a festive dish, and as such, often served at weddings, birthdays and other special occasions.

Sweden’s entrant to the list of dubious edibles would have to be Surströmming. A specific type of herring is caught in the Baltic Sea just before it spawns in the spring, lightly salted and left to ferment for several months. First-timers may wish to stand far, far back when a can of this is opened, as its putrid smell is considered one of the worst food smells ever. Small wonder, then, that it’s always consumed outdoors. Although a decree that forbade the sale of the current year’s production prior to the third Thursday in August is no longer on the books, sellers traditionally stick to that date as the first time it’s put on sale. A dish not sold in most restaurants, cans of the stuff are available in many food shops. Bring some home and organize your very own surströmmingsskiva, or surströmming eating party, with brave friends; better yet, make way to the town of Alfta, in northern Sweden, for the annual festival held on its release date in August. Online: surstrommingsskivan.se

The Italian island of Sardinia also claims ownership of an unusual delicacy. Casu Marzu’s name in translation describes exactly what it is: putrid cheese. This traditional sheep’s milk cheese is made by removing part of its rind, which allows it to be invaded by cheese flies. The eggs they lay soon become larvae; in other words, maggots. Their digestive action works to break down the cheese’s fats, giving it a soft, almost melted texture. Eating the wiggly, translucent maggots is all part of the experience. The liquid seeping from the cheese is known as làgrima, or teardrops, which might well fall from your own eyes as you sample. Luckily, European Union regulations have given you a convenient out. The product violates so many food hygiene regulations that its sale has been banned. Online: tinyurl.com/yx9vyqq7

Not all rot produces a product the majority of us would surely consider unpalatable. A fungus is responsible for the creation of some of the world’s sweetest and most highly prized wines. The fungus, Botrytis cinerea, nicknamed “noble rot,” pierces the skin of a ripe, healthy grape that’s been left on the vine long after the usual harvest time. Under favorable conditions including misty mornings and dry sunny days, the sugars, flavors and acids grow ever more concentrated as the water in the grape evaporates. The resulting juice is golden and sweet, and capable of producing complex wines that get better with age. In Germany, look for wines labelled Beerenauslese or Trockenbeerenauslese; in France, Sauternes, or in Hungary, the Tokaj aszú. Hungary’s famous wine is feted each year in the town of Erdőbénye, where legend holds it was first created. A harvest procession, craft fair and showcase of local specialties is typically held in August or September. Online: tokajwineregion.com