Erik Oropeza ‘There was a sudden white light’ 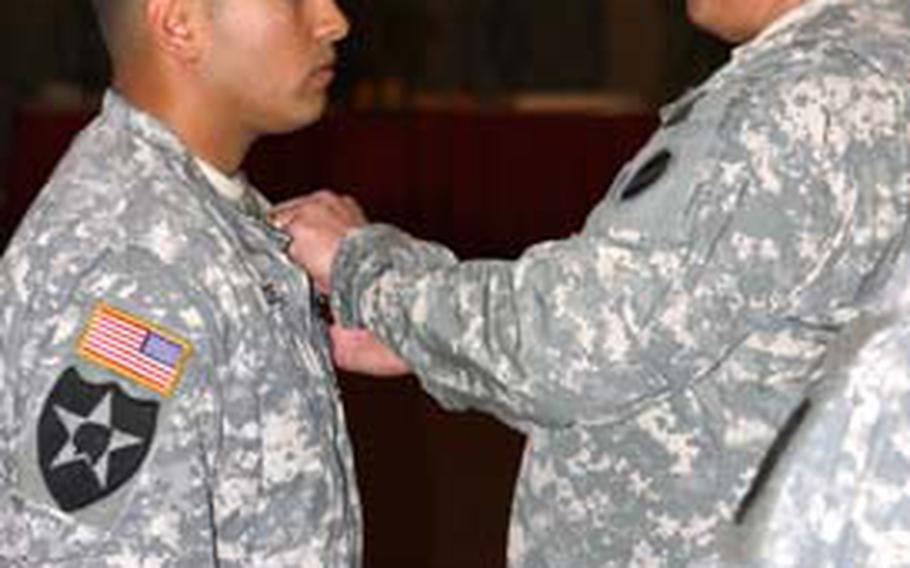 Spc. Erik Oropeza, is given the Distinguished Service Cross for his acts on May 22, 2007, near Taji, Iraq. Oropeza is credited for preventing his vehicle and crew from being overrun by “a five man enemy ground assault force maneuvering against him." (Photo courtesy of U.S. Army)

The day started out ordinarily enough &#8212; for a war zone.

The morning sun was already bright. Army Spc. Erik Oropeza awoke around 7:30 a.m. after a decent night&#8217;s sleep. He drank a Gatorade.

With Oropeza in the driver&#8217;s hatch, six U.S. soldiers headed north on a routine Stryker patrol down Main Supply Route Tampa along with another Company B Stryker.

It was to be no ordinary day for the Manchus of Fort Lewis, Wash.

By the time Oropeza returned to his unit&#8217;s outpost hours later, two of his fellow soldiers would be dead and three more severely wounded. For his courage in a fearsome firefight, Oropeza would be declared a hero.

In February, the 22-year-old became the 21st soldier to receive the Distinguished Service Cross &#8212; the country&#8217;s second highest award for valor in combat &#8212; since the wars began in Afghanistan and Iraq.

He&#8217;s credited with preventing his vehicle and crew from being overrun by "a five man enemy ground assault force maneuvering against him," according to his medal citation.

The bullets fired at the Stryker set the stage for a deadly ambush.

The soldiers spotted enemy activity in the direction of a dirt road off Tampa. Attempting to flank the enemy, Lee requested permission to go down the road.

About 100 yards in, Oropeza was directed to put the eight-wheeled armored vehicle in reverse &#8212; the road was too narrow to turn around.

"As soon as I started reverse, we had barely moved, there was a sudden white light," Oropeza said.

Twenty 155 mm artillery shells, buried in the road, exploded beneath the Stryker.

The blast ripped a crater through the Stryker&#8217;s center and blew open all of the vehicle&#8217;s locked hatches. After quickly regaining consciousness, a dazed but uninjured Oropeza heard the muffled screams of fellow crewmembers. He pulled himself out of the driver&#8217;s hatch, moving under enemy fire without his personal weapon, which had been destroyed in the explosion.

"I was running on the top of the Stryker. I could see the bullets just whizzing by me," he said.

He picked up an M-4 carbine with an M-203 grenade launcher lying on top of the Stryker and, from waist deep in a hatch, returned fire from less than 20 yards away.

"I just kept on engaging them," Oropeza said. "I grabbed a hold of the 203, aimed, pulled the trigger &#8230; and I just dug inside the hatch" when he heard the 40 mm grenade explode outside.

The enemy fire quieted momentarily. That&#8217;s when Oropeza got his first glimpse inside the Stryker&#8217;s main crew compartment.

Pvt. Robert Worthington was dead. He was lying on top of another soldier "who had blood all over his face," according to Oropeza.

Oropeza heard someone scream, "My leg, my leg." It was Lee, who later recalled, "I was yelling for the guys. I still had a little difficulty hearing because of the blast."

Oropeza found Lee inside the hole in the Stryker&#8217;s middle. He was pale. His right foot and lower leg were gone, and the rest of the leg below the knee mangled; Lee had already applied a tourniquet.

But with a weak, tingly right arm, Lee was unsure the pressure was tight enough. Oropeza tied a second tourniquet.

"He said to hang onto it," Lee said. "I told him, &#8216;We have no communication ability with anybody else. We need to notify the other vehicle of the situation.&#8217;"

Before going for help, Oropeza looked up through the vehicle commander&#8217;s hatch. Staff Sgt. Kristopher Higdon was also dead.

"I started crawling to the back of the hatch," he said. "I could barely climb outside of it, but I started waving to the other Stryker for help. I didn&#8217;t see anyone wave back or come out."

He knew if he ran he would be shot at. But Oropeza also knew he needed to reach the medic in the other Stryker, parked about 100 meters away across an open area, if Lee and the others were to survive.

He grabbed the M4, reloaded and ran for his life, turning as he sprinted to shoot over his shoulder at what appeared to be at least four men firing at him from behind a nearby berm.

In the nick of time, the other Stryker started giving Oropeza cover. He made it.

Oropeza, once inside the Stryker, removed his helmet. His head and heart were pounding, but he would have kept on fighting.

After the firefight, Lee and two other wounded soldiers were medically evacuated. They survived. Lee received about 18 units of blood after being airlifted to Balad Air Base near Baghdad. Shrapnel had punctured a major artery, resulting in that tingly right arm.

Now medically retired from the Army, Lee credits Oropeza for being the first of many to save his life.

"It&#8217;s amazing for one person &#8230; while being shot at from multiple angles, to crawl all over the place and try to help his buddies out," Lee said of Oropeza.

Though Lee recognizes he and his soldiers were caught in a well-organized ambush, he&#8217;s haunted by "what-ifs."

He thinks about that day all of the time. "I think about what more I could have done, the cost of my decisions on that day," he confided.

For Oropeza, it took awhile for the magnitude of what had occurred that May morning to seep in.

"When we got back, I just got really hungry and thirsty," he said. "I sat down outside next to the Stryker and ate. I knew what happened but it didn&#8217;t hit me."

Now, the memories and emotions of that day won&#8217;t easily fade.