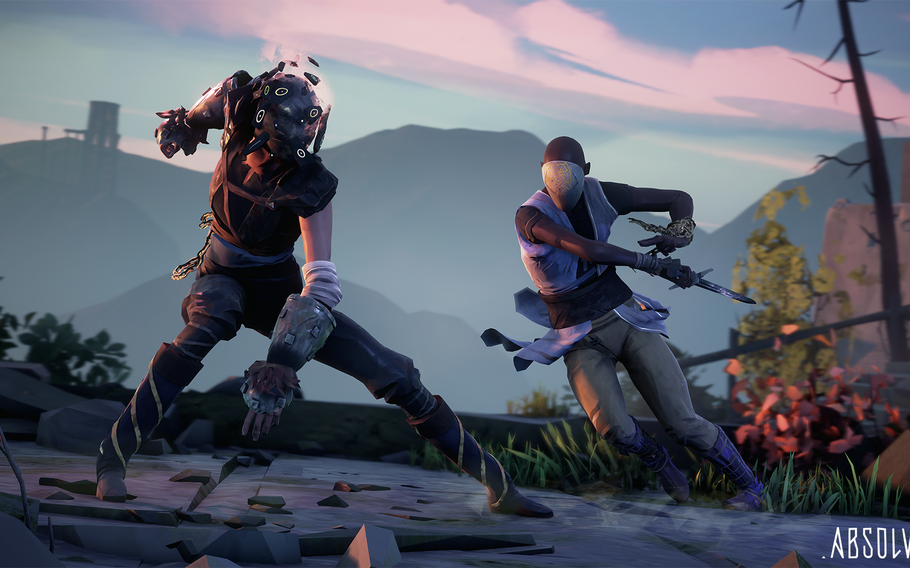 Some combinations seem so intrinsic to our lives that it catches the mind off guard when we realize somebody had to have invented them. Peanut butter and jelly. Batman and Robin. Flowers and chocolate.

That realization hit me while playing Sloclap’s fantasy martial arts title “Absolver.” Why did it take somebody so long to bring the combo-heavy action of a fighting game into a “Dark Souls”-like action title? And how the hell did a first-time developer nail the intricacies of hand-to-hand combat in an open-world, three-dimensional space?

I don’t have the answers to those questions, but what I do know is that “Absolver” fills a niche I wasn’t aware existed. It does take a lot of cues from “Dark Souls” but ultimately forges an identity unlike that of any other game.

That identity is born largely from the game’s two most unique aspects: its world and its combat system.

You play as a faceless Shaolin-esque monk, who ascends from the rank of trainee to take on the role of Prospect during the opening sequence. Your goal then becomes earning the title of Absolver – or full-fledged warrior monk. To do that, you’ll have to defeat six minibosses and two major bosses to unlock the massive stone door protecting the ultimate antagonist.

You’ll also have to master “Absolver’s” unique combat system. It starts simple enough. You pick one of three styles of martial arts. Windfall allows you to dodge attacks. Kahlt practitioners can just shrug off attacks. And Forsaken martial artists focus on parrying blows.

Each plays with the same set of basic attacks. One button for a normal attack, one button for a heavy attack, a button to dodge and the left trigger to block. As a Windfall practitioner, flicking the right thumbstick allowed me to sidestep attacks.

Turtling or endless sidestepping attacks aren’t options because blocking, attacking and dodging take stamina. Running out of stamina leaves you momentarily vulnerable, which is a very bad thing in “Absolver.”

Where combat gets a bit more complicated – and a lot more fun – is when delving into the stance system.

Holding the right trigger down and pushing the thumbstick up, down, left or right will switch up your combat stance. Each stance opens up a different chain of attacks. So, in the left stance, you can fire off a light jab with the normal attack button, followed by an elbow strike, and finishing off with a heavy axe kick.

The best aspect of the combo system is that it’s customizable. Each attack in the string can be swapped out, allowing you to build your own combos. Moves are earned as you play and can be swapped out and practiced from the menu at nearly any time. It’s hyperbole to say that no two players will have the same fighting style, but not by much. The combinations available are enormous.

Weapons expand the combat system even further. There are limited-use swords and polearms scattered across the game’s world, as well as weapons that can be equipped for as long as your stamina holds out. Each provides a different avenue of attack, as well as greater damage output.

In the beginning of the game, you’ll likely rely on a simple string of attacks. But as you get a handle on the flow of combat, you’ll be busting out intricate combos that involve more or less every button on the controller. When you pull off a multi-string combo fired off from multiple stances, you’ll wonder – as I did – why more action games haven’t utilized this system before.

Semi-randomly spawning enemies dot the areas between the major encounters, giving you plenty of opportunities to perfect your fisticuffs. But there’s no cannon fodder in “Absolver.” Each enemy is equipped with the same plethora of attacks as you, and each is fully capable of beating the stuffing out of button mashers.

They also have a nasty habit of ganging up on you, which is where one of the few flaws of the combat system comes into sharp relief. Facing off against one enemy is a strategic chess match between two skilled combatants. When you lose a one-on-one fight in “Absolver” it’s annoying, but feels fair.

There are no real crowd-control options and disengaging from enemies is unnecessarily difficult. As a result, fighting multiple enemies can swing from interesting to getting smacked around by AI enemies that don’t have to fight a camera system built largely for one-on-one encounters.

This isn’t a deal-breaker. However, when multiple bosses exploit what amounts to cheap tactics that you’re not equipped to counter, it takes some of the shine off an otherwise flawless combat system.

None of the enemies is unbeatable. But I feel the game would have been much better served by offering greater space between single encounters and upping their skill levels, rather than bunching up enemies when attempting to provide a greater challenge to the player.

Raslan, the city in which “Absolver” takes place, is a beautiful one to explore. From moss-covered buildings overlooking open seas to dark ruin-filled caves, there are simply no boring places to uncover in Raslan. It’s colorful, refreshing and simply enjoyable to run around in.

There is also a small amount of loot to be found – from new masks to better armor and weapons – making exploration not only fun, but necessary. I really enjoyed that I was able to run around Raslan without being interrupted by cutscenes every five minutes, too. The story is simply told, but the world holds so much personality that it feels more fleshed-out than it really is.

Like “Dark Souls,” the world of “Absolver” is largely single-player, but includes some heavy online options. Other players can hop into your world (if you allow it) and either challenge you or help you take down enemies. I’ve both had the tar kicked out of me by a random intruder and received help defeating a boss from a friendly player. “Absolver’s” online giveth and it taketh away.

“Absolver” is easily one of the most unique games of the year. From its intricate combat system to its beautiful, engaging world, “Absolver” is simply a game that shouldn’t be missed. The multiple enemy encounters could use a bit of refining but, other than that, there is nothing Sloclap didn’t get right. The fact that this is their first effort as a studio is astounding. I can’t wait to see how players respond to their efforts. Especially since success could create a larger online player base to challenge with my superior kung fu skills.