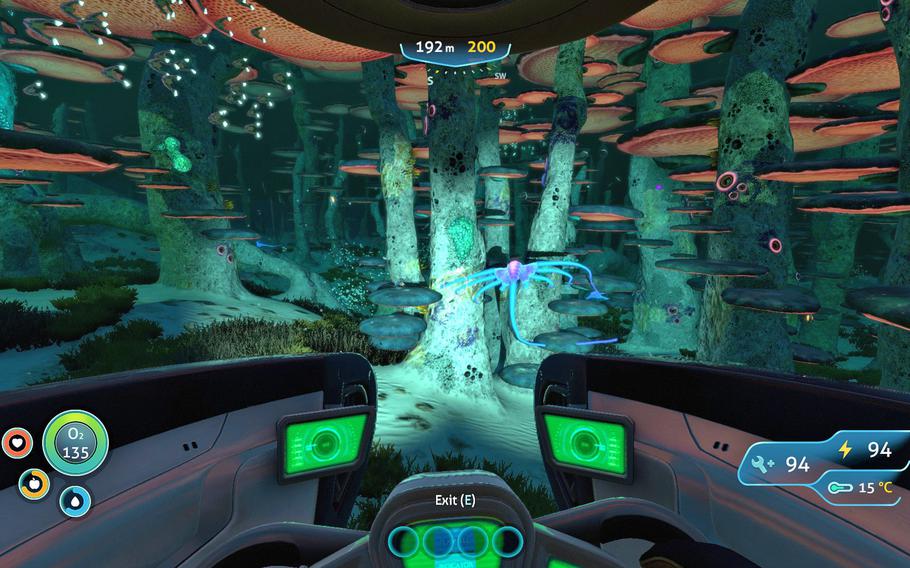 'Subnautica' takes place on an alien, aquatic world and that setting allows for some truly beautiful scenery. (Unknown Worlds Entertainment)

'Subnautica' takes place on an alien, aquatic world and that setting allows for some truly beautiful scenery. (Unknown Worlds Entertainment) 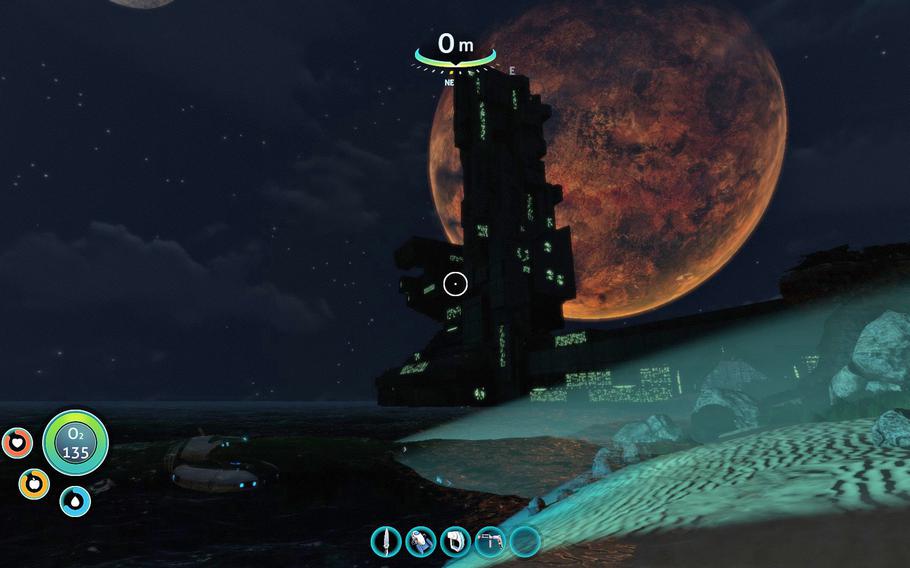 The story of 'Subnautica' unfolds slowly, letting the player dictate much of the pace of play. (Unknown Worlds Entertainment) 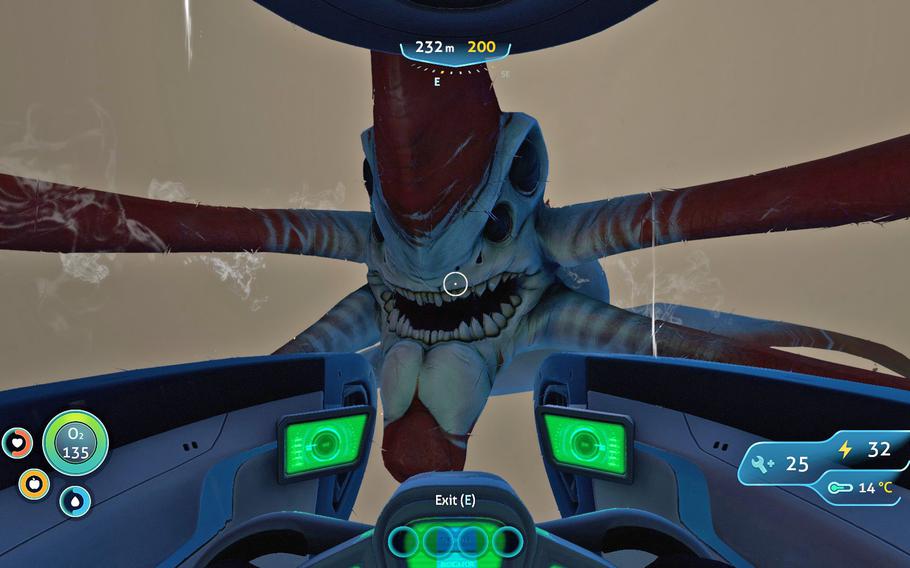 The oceans of 'Subnautica' are dark and full of terrors. (Unknown Worlds Entertainment) 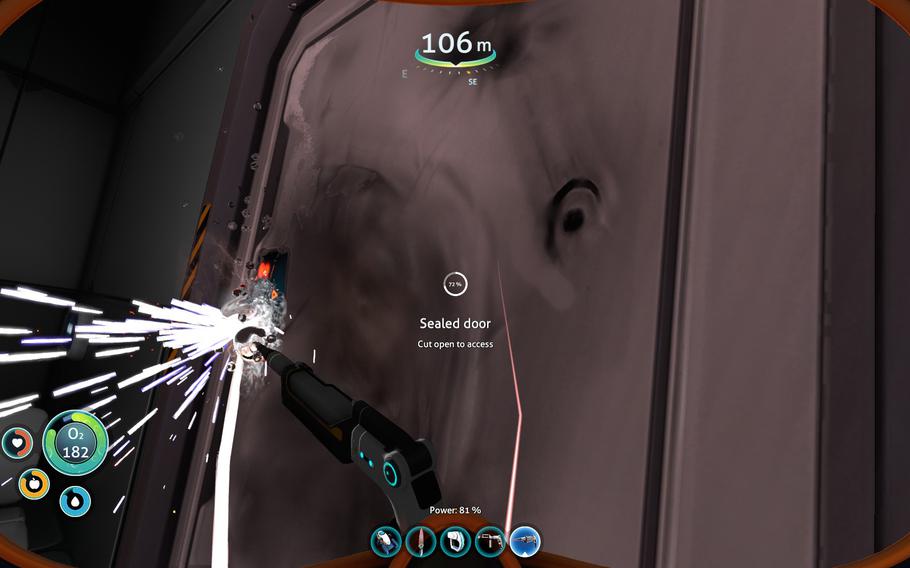 There is an element of progression built in to the world of 'Subnautica.' Some areas, like this sealed door, can't be opened until you've built the proper set of tools. (Unknown Worlds Entertainment)

The aquatic-themed “Subnautica” opens like so many other survival games – with a sudden introduction into a hostile world and few clues on how to proceed.

This basic premise might sound familiar. After all, the market is flooded with dozens – if not hundreds – of games that have tried to ride on the coattails of genre success stories like “Minecraft” and “Don’t Starve.”

Most of them are horrible games and more than a few are outright scams, lazy asset flips designed to part the gullible and hopeful from their hard-earned cash. This unfortunate dilution of the rock-solid survival premise has caused genre fatigue among many players.

But even if you can’t stomach the thought of having to juggle yet another series of food, water and health meters, “Subnautica” deserves your immediate and undivided attention. It’s not only a breath of fresh air in a stale genre, but it’s an absolutely stunning game that withstands any preconceived notions of what a survival game should be.

“Subnautica” opens with the player character being launched from the exploding spaceship “Aurora” into the alien oceans of an unknown planet. The broken-down lifepod you land in becomes the first tiny foothold in a world that is indifferent to your presence and hostile at the same time.

Choice of game mode will shape how you play. Freedom mode forces players to manage their health and oxygen. Survival mode adds food and water (this is the mode I played most for this review). Hardcore gives you only one chance at life. And creative is the worry-free sandbox mode.

In all but the final mode, you’ll quickly have to figure out – with a few hints from a PDA that serves as an inventory manager, notebook and tutorial – how to survive. That’s easier said than done.

As the world is almost entirely oceanic, you’ll have to dive below the surface to find sources of fresh water, food, materials with which to build more permanent structures and other survival tools.

One of the best aspects of the game is that developers Unknown Worlds Entertainment didn’t feel the need to have floating bits of information above every critter, telling you what’s safe and what will try to eat your face. You’ll have to figure it out as you go. During my first run through of the game, it took me a scary amount of time to figure out how not to dehydrate.

In fact, almost all of the game’s systems are left for the player to discover. Crafting anything but the most rudimentary of objects will take some detailed exploration of the depths. The ocean floor holds bits of wreckage from the Aurora and other similarly unfortunate spacecraft. Scanning objects among these derelicts will supply you with more advanced blueprints.

Finding these wrecks – and other unique elements on the ocean floor – is not easy. There are no instant markers that lead you straight to points of interest – though you can eventually craft various ways around that. But until then, navigating a map in terms of depth as well as north, south, east and west can be tricky.

Add to that the fact that sunlight only penetrates the ocean surface so far and that you’ll have to manage oxygen, water pressure and hostile sea life and the simple act of finding scrap metal can become quite an ordeal.

An ordeal, but a beautiful one.

Unknown Worlds' decision to set “Subnautica” on an alien world instead of Earth was an inspired one. This provided them with carte blanche to create truly fantastic creatures – from enormous electric work critters to incandescent puffballs to neon-striped round fish.

The flora and fauna designs make exploring the oceans much more fun than they I anticipated. If the developers had gone for a more muted color palette or realistic visual tone, I think I would’ve quickly gotten bored with searching the ocean floor. As it stands now, I’m still finding things that make me say “Oh, wow” even after dozens upon dozens of hours of playtime.

“Subnautica” also has a discoverable storyline that can be followed or ignored almost entirely. I found it fascinating, personally, even if I constantly got distracted with building more and more elaborate structures. There is a slight horror bend to the plot and at least one standout moment that will send chills down your spine.

But if you’re not interested in all that – if you’d rather just build the world’s biggest and best sea base – you can do that too and ignore the radio calls that push the story forward.

“Subnautica” was in early access for quite a while and the game has grown by leaps and bounds. There are still some issues that I’d like to see ironed out, though. Some of the needed materials can take way too long to respawn, meaning sometimes the game forces you to spend far too much time searching for a random fish instead of doing what you’d like.

The hydration meter becomes a particular chore because of this. Until you’ve progressed far along the technology tree, drinkable water is hard to come by and the fish that provides it are far scarcer than any other lifeform. That coupled with what I feel is a water meter that depletes way too quickly means that sometimes you’re spending time stockpiling water to keep a meter full instead of exploring, building or otherwise having fun.

Inventory management, often a bane of these types of games, is also a pain until you can build one of the most advanced items in the game. There doesn’t seem to be any real way to mitigate it, though it’s possible I missed a craftable backpack somewhere along the way. If not – modders, can you please get on that ASAP? Thanks.

There are also a few technological bugs. When you reopen the game, you’ll constantly be bombarded by a series of messages telling you that the power in your various structures is offline. Then online. There’s also a fair amount of pop-in when you’re exploring. Normally, this isn’t a big deal but at least once I had to reload a game because I was attacked by a very large, very angry leviathan that appeared – not out of the shadows – but out of thin air.

Still, the game is largely soundly crafted, considering how many moving items the game has to keep track of. The oceans of “Subnautica” are always teeming with life and filled with wrecks that remember that you’ve been there before – and all of this is accomplished without sacrificing visual acuity or gameplay. The coders behind the scenes at Unknown Worlds deserve the biggest of applause for pulling this off.

In fact, everybody at Unknown Worlds does.

“Subnautica” not only defied all expectations of what I thought I wanted from a survival game in 2018, it also brought with it an unparalleled sense of wonder and adventure. Simply speaking, it’s the best survival game since “Minecraft” and it’s one of the best games I’ve played in recent memory.

Grade: A+Platform: PC (reviewed) and Xbox OneThis game was played in early access and a review copy of the final game was provided by the developer for review purposes.