The weird, wonderful world of Torment: Tides of Numenera 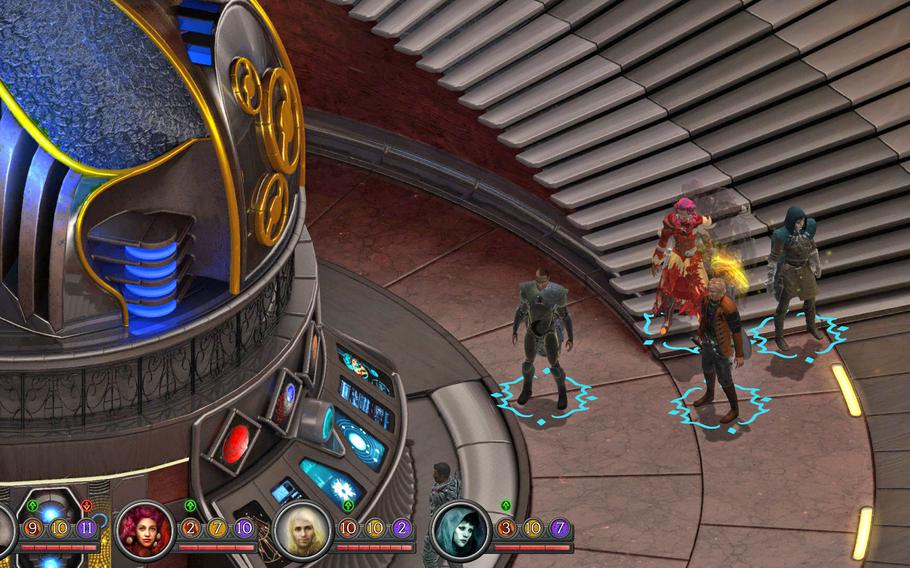 The world of "Torment: Tides of Numenera" blends science fiction, fantasy and eldritch horror together for a unique roleplaying experience. (inXile Entertainment)

The world of "Torment: Tides of Numenera" blends science fiction, fantasy and eldritch horror together for a unique roleplaying experience. (inXile Entertainment) 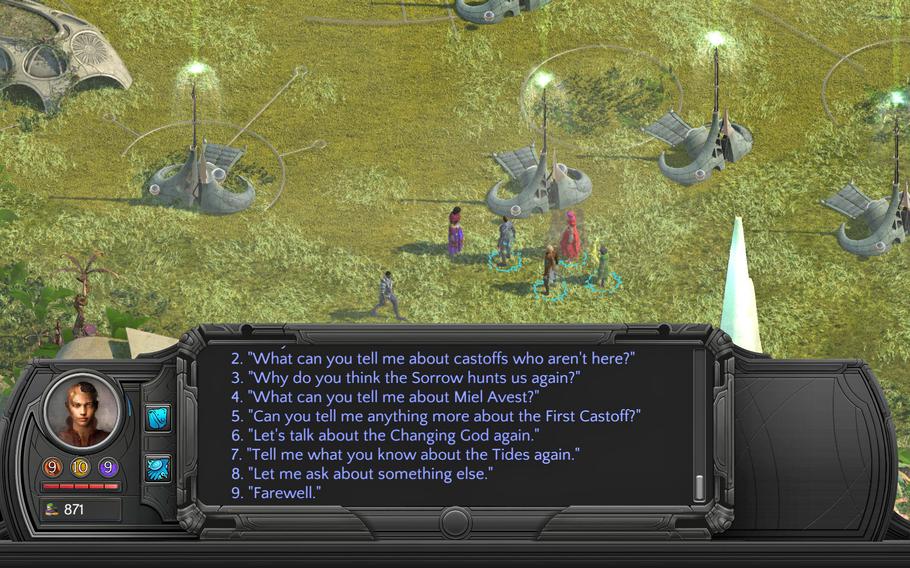 Sick of video games that offer up limited dialogue choices? "Torment: Tides of Numenera" may be for you. (inXile Entertainment) 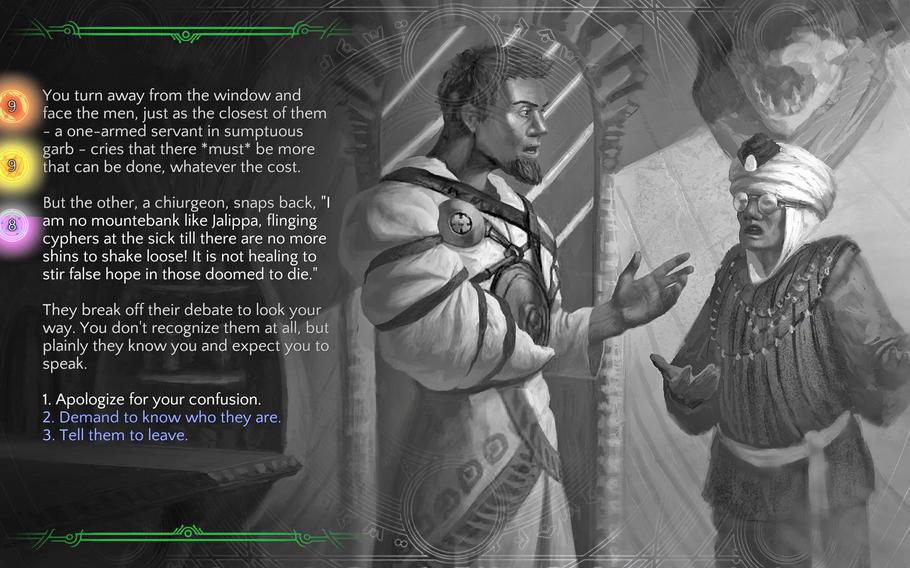 "Torment: Tides of Numenera" is not a game for those not fond of reading. These choose your own adventure vignettes are one example of the use of text to push the game's narrative along. (inXile Entertainment) 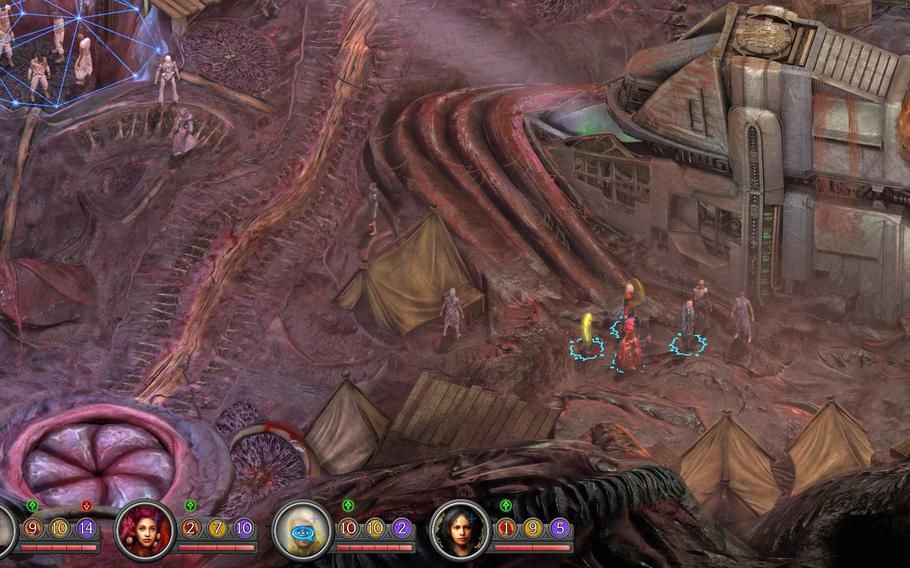 "Torment: Tides of Numenera" is the successor to the much beloved "Planescape: Torment" roleplaying game, and both share a love of the macabre and strange. (inXile Entertainment) 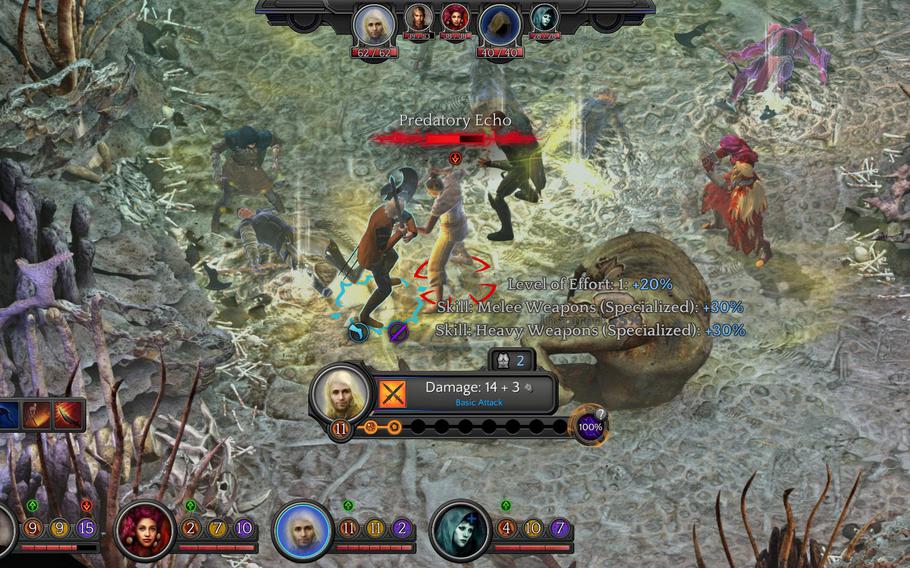 Combat is the one aspect of "Torment: Tides of Numenera" that isn't perfect. A bit shallow and far too plodding, it's best avoided whenever possible. (inXile Entertainment)

Fair or not, games that don’t have the benefit of a multimillion-dollar ad campaign and a legacy that ensures a baked-in fan base are in danger of being lost in the shuffle this year. That goes double for any roleplaying game, all of which will be competing with the likes of “Zelda” and “Mass Effect” for gamers’ attention and cash.

The ones that will rise above the fray must have some hook, some unique angle, in order to distance themselves from their peers. And when it comes to unique, there is no other title that better embodies that concept than inXile’s “Torment: Tides of Numenera.”

A spiritual successor to “Planescape: Torment,” one of the best written computer roleplaying games of all time, “Numenera” is an isometric, party-based roleplaying game in the vein of “Baldur’s Gate” or the more recent “Pillars of Eternity.”

It’s set in a world that is unlike any other (save for its more than decade-old predecessor). Numenera is a nexus of all realities, a meeting place where infinite worlds have collided, leaving the detritus of thousands of civilizations behind. Humans mingle with robots, who live side by side with space aliens, ghouls and interdimensional beings.

You play as the Last Castoff, the latest discarded body of an immortal being that hops from one body to the next. As the Castoff, you awaken in midair, falling to the ground without a clue of who you are and why you’re alive.

Before you have time to breathe, you’re inside your own mind, being chased by a formless, all-devouring creature known as the Sorrow. There is a lot more to that story, but it’s a poor review that spoils all the good stuff.

Numenera is a weird, strange world. Just when you start to figure out what the game is about, you’ll find yourself traipsing about the innards of an inconceivable monstrosity or playing politics with a bunch of merfolk. It’s not often a roleplaying game offers up legitimate surprises, but astonishment is the game’s bread and butter.

The characters you’ll run into are as peculiar and wonderful as the world they inhabit. One second, you’ll be having a drink with a psychic projection of a lost comrade; the next you’ll be communicating with artificial lifeforms by sketching ideas out on paper.

The Castoff’s crew include a woman who exists in numerous dimensions at once, a shady entrepreneur and a homeless waif, created and written by fantasy author Patrick Rothfuss. Each has a backstory and realistic motivations for joining the Castoff. Some will even leave if they disagree enough with your actions.

I enjoyed adventuring around with the cast, though I do wish inXile had embraced the weird a little bit more than they did. Why couldn’t we have one of the strange robot or alien characters as a party member?

Still, it’s very much an “anything goes” world. In lesser hands, the combination of different worlds and characters that canonically could be anything could have led to a poorly-mixed stew of ideas. In the hands of the talented people at inXile, chief among them legendary games’ writer Brian Fargo, the world of Numenera feels as planned out and alive as any other fantasy world.

Perhaps the biggest hook, outside of the unique setting and interesting characters, is the fact that for once, you won’t have to despoil the landscape by leaving a trail of corpses in your wake. While it’s very much possible to brute force your way through “Numenera,” it’s equally possible to talk your way out of any given situation.

In fact, the diligent player who puts a premium on verbal skills will likely get to experience more of what the game offers than the one who focuses on combat skills. And you will have to make those types of choices when creating your player character.

Each character has three pools of skills — might, speed and intelligence — from which to draw. Each affects every interaction, from combat to verbal negotiations. Skill checks require that players spend points from each pool, and they replenish only with the help of consumable items or by sleeping.

So, say you want to convince a back-alley brigand to leave your party alone. You’ll get the choice to fight him off, ask him why he’s resorting to a life of crime or convincing him to run away. The first choice will lead to combat, the second may lead to more dialogue or a sidequest, the last will open up a skill check.

You might have 10 points in Intelligence. It might take 4 to convince him. That leaves you with 6 to spend on further checks. If you run out, don’t expect to make much headway (at least until you level up considerably).

This type of choice underpins the entire “Torment” experience. Choice and dialogue make up the meat of the gameplay. Careful attention to what is being said and how it’s being said can make a vast difference in how you experience the game. In my playthrough, I believe I got in only five or six fights, several of which were absolutely necessary.

That’s generally a good thing, not only for the extra challenge and dialogue options, but though “Numenera” has many bright spots, the game’s combat system isn’t one of them.

It’s not necessarily bad, but it’s overly slow and ponderous. Individual turns take quite a bit of time, and the animations take some time to spool up in some cases. Often, I felt as if the game was punishing me for resorting to fisticuffs. There is a life lesson there, I suppose.

“Numenera” is also a rock-solid game from a technical standpoint. I ran into a couple of minor, non-game-breaking glitches, but otherwise it was smooth sailing. The relatively low system requirements (4 gigs of RAM, an NVIDIA GTX 260 or Radeon HD 4850 or above) make this perfect to throw on a laptop.

Its length — about 20-30 hours — makes it perfect for the gamer looking to get a lot of bang for his or her buck, as well. If you’re looking for something to take shipside, or to have with you on deployment, you could do a lot worse than “Numenera.”

For those of us fortunate enough to have access to a wider range of entertainment options, “Numenera” still stands out as one of the finer games of the year. Even if your gaming cup is filled to the brim, give this title a try. You just might be surprised at how much fun you’ll have with a game you might not have heard about before.