Taking a quick, bloody walk down memory lane with ‘Amid Evil’ 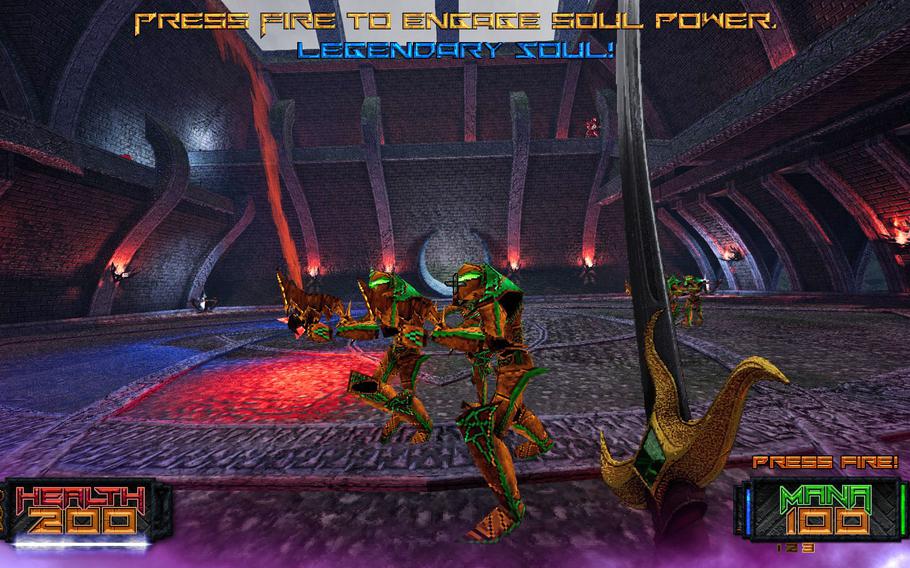 "Amid Evil" is a fantastic throwback to first-person shooters of the early â€˜90s, with all of the quick-paced gameplay and low-poly graphics that brings. (Indefatigable/New Blood Interactive)

"Amid Evil" is a fantastic throwback to first-person shooters of the early â€˜90s, with all of the quick-paced gameplay and low-poly graphics that brings. (Indefatigable/New Blood Interactive) 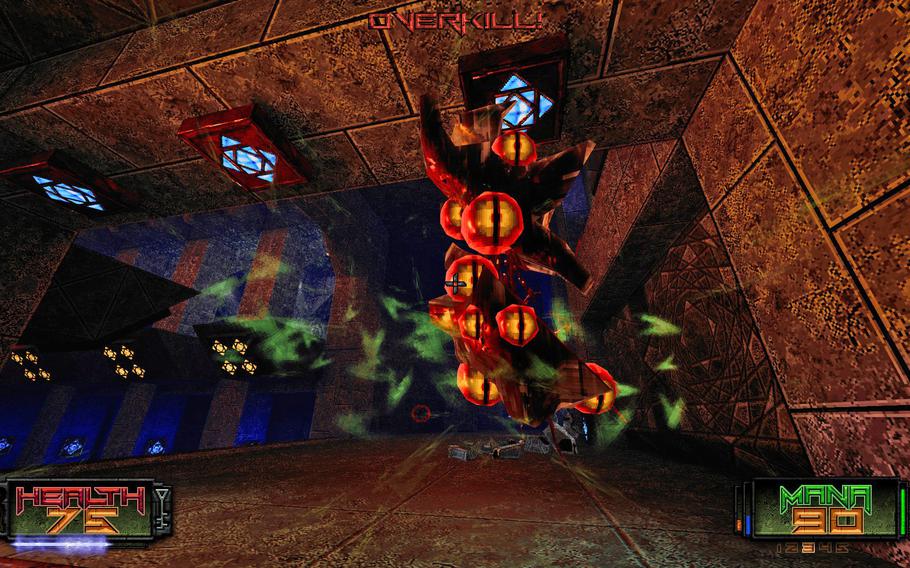 Enemies in "Amid Evil" are interestingly designed and have fun attack patterns. They can attack from ceilings, sidewalls and floating in mid-air. Nowhere is safe. (Indefatigable/New Blood Interactive) 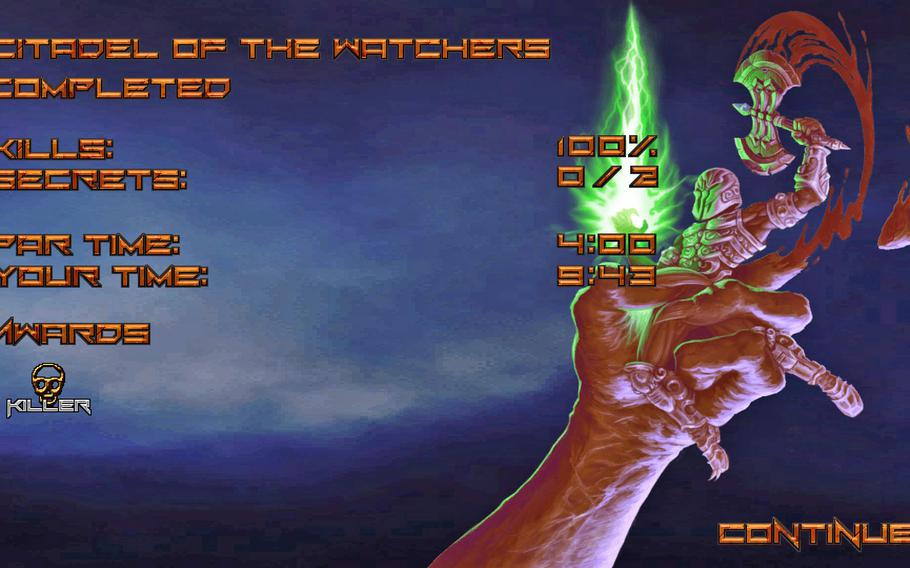 The end of each level was a good reminder for how terrible I am at old-school first-person shooters. (Indefatigable/New Blood Interactive) 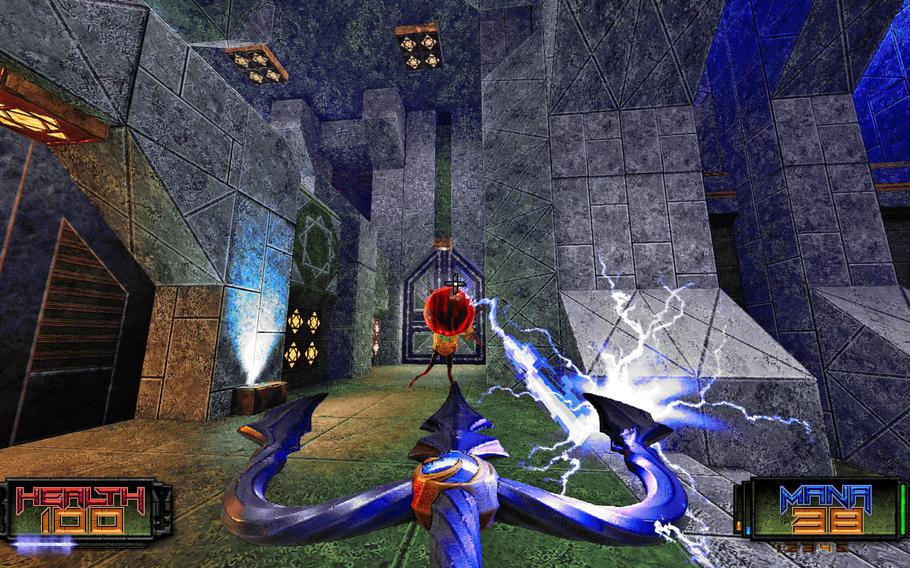 The level design of "Amid Evil" is top-notch. Each level can be finished in mere minutes but contain enough enemies and secrets to keep players entertained for much longer. (Indefatigable/New Blood Interactive)

Sure, more modern games with their generous hitboxes and slow pace of play fooled me into thinking that I had improved somewhere between “Quake III Arena” and “Halo 5,” but the fact is, I hadn’t.

I was quickly reminded of this when I loaded up “Amid Evil” for the first time and was promptly obliterated in less time than it took to say “why didn’t I respawn?”

That’s the exact feeling that Indefatigable was going for.

Everything in the still-in-early-access “Amid Evil” heralds its creators’ love for the early-’90s FPS. The low-poly graphics, the visual aesthetic ripped from a death metal cover, the sound design that includes bloodcurdling screams and maniacal laughter. Every aspect of “Amid Evil” is a love letter to a bygone era — an homage to a more uncivilized time, if you will.

Chief among those elements is the blistering speed of play. If you haven’t played an older FPS in some time, the biggest thing that sticks out is how quickly everything happens. Players and enemies alike moved much faster than in the vast number of modern shooters. It’s not a bad thing that shooters have slowed their pace, but the difference in speed of characters and enemies in something like “Doom II” and the modern “Wolfenstein” is night and day.

“Amid Evil” matches those older titles in pace of play. That speed influences everything — character movement, enemy attacks and level design. In fact, you’re graded on completion time at the end of each level. The game wants you to move quickly, which is in stark contrast to the more methodical shooters of today.

The difficulty level of “Amid Evil” isn’t too extreme, but it takes some getting used to. Once again ripping pages from FPS history books, the game doesn’t give you regenerating health, shields or an abundance of health pickups. Health is a scarce commodity, and even low-level enemies can kill you in a few hits.

To survive, you’re going to have to be light on your feet, keep your head on a swivel and search every nook and cranny for power-ups. Health globes and ammo pickups are scattered across the intricately designed, multi-level maps, with secrets galore in each.

Outside of a handful of boss battles, the mission of each level is basically the same. Find weapons, kill enemies. Sometimes you have to first find keys to open up doors so that you can kill even more enemies. This game is never going to be mistaken for an intellectual exercise.

The enemies are all demonic entities with horns and globular clusters of eyeballs and ichor. More than a couple feel like characters left on the “Doom” cutting-room floor. That’s not a bad thing. Besides 2016’s “Doom,” most shooters have gone for more cartoony or ultra-realistic looks. It’s nice to play something a bit different — even if once upon a time the evil aesthetic was the tired trope of its day.

Of course, the monsters are very bad and want to murder you, so you’re going to have to kill them harder. To that end, “Amid Evil” features a bevy of fantasy weapons for you to try out. There is a sword that fires off shotgun-like blasts, a mace that fires spikes that impale your enemies against the wall (nice nod to “Painkiller” there) and a ton of others to discover.

They are scattered across the level, and once collected remain in your inventory — unless you die. Then you can reload your game from an auto or manual save point — like a coward — or you can reload the level and try again. The weapons at that point are stripped from your personage and you have to rearm yourself on each level.

This unique system seems to be aimed at satisfying the hardcore FPS fans — who want the game to be as back-breakingly difficult as possible — and other gamers who would get annoyed at having to start levels over again.

Indefatigable really worked hard to make “Amid Evil” accessible without stripping it of what makes it unique — that it is a challenging game that makes no apologies for its love of old-school FPS games. If you enjoyed games like “Hexen” or “Doom,” this game was basically made for you. Other gamers, I think, can still get a lot of enjoyment out of this — especially considering the $20 price tag.

“Amid Evil” is still in Early Access, but for the life of me I can’t see what else they’d need to add. The game is admittedly on the short side, if your style is to just play through each level and call it good. Those players can get through it in a solid weekend of play. I personally won’t consider my time with “Amid Evil” done until I beat the par times in each level.

Which, considering my rusty hand-eye coordination, is going to take some time.