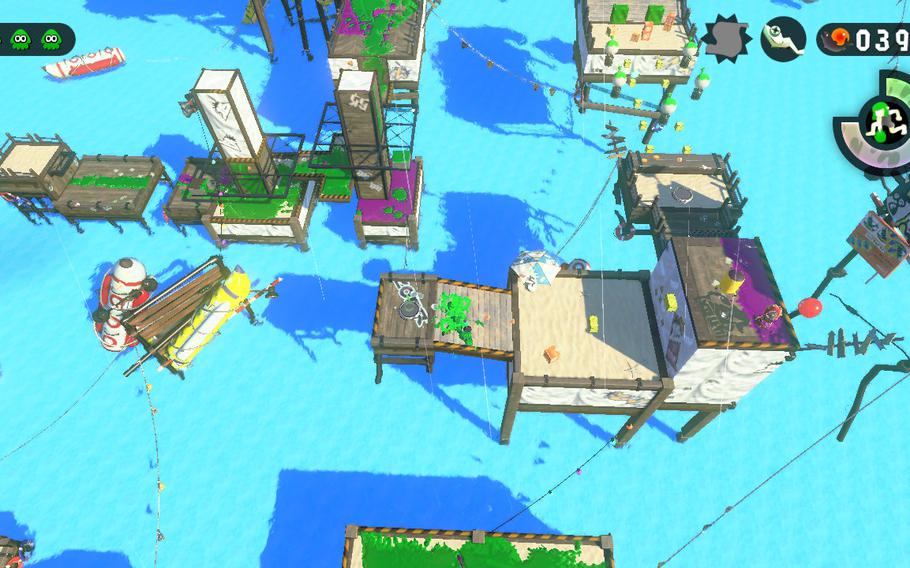 "Splatoon 2" offers up some rudimentary single player content, perfect for new players looking to get their feet wet. (Nintendo)

"Splatoon 2" offers up some rudimentary single player content, perfect for new players looking to get their feet wet. (Nintendo) 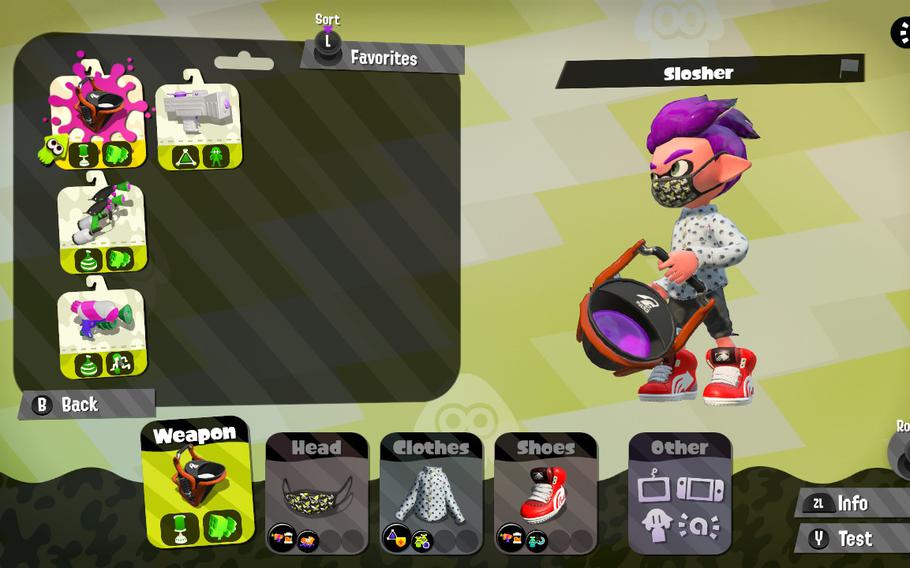 Weapon loads are easily swapped in "Splatoon 2," though the weapons you unlock at later levels are usually just better than anything you can play with in the beginning. (Nintendo) 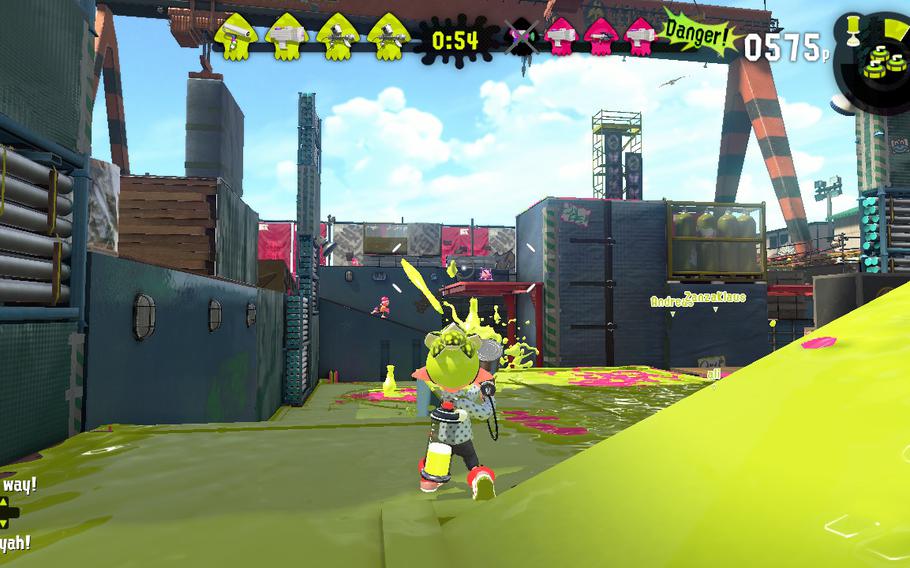 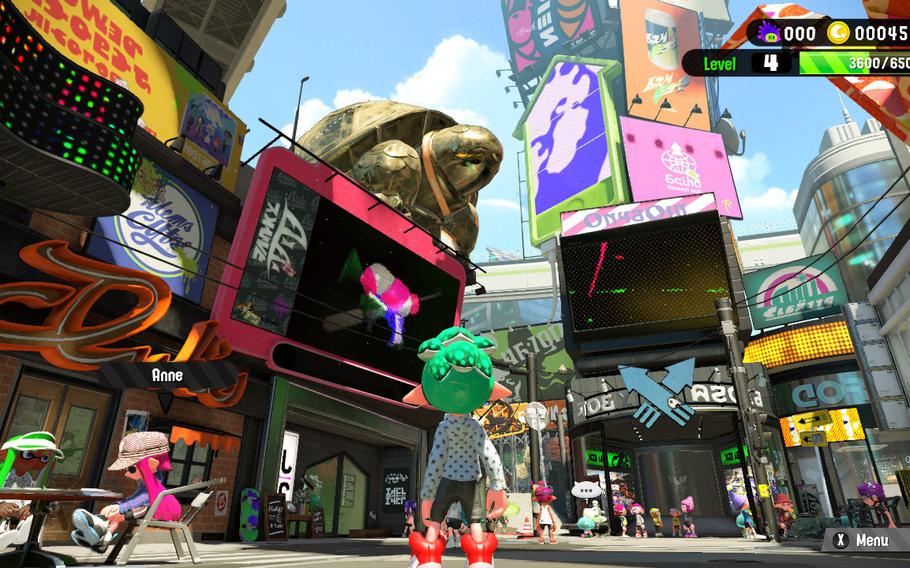 "Splatoon 2" is a vibrant, imaginative game perfect for adults and children of all ages. (Nintendo) 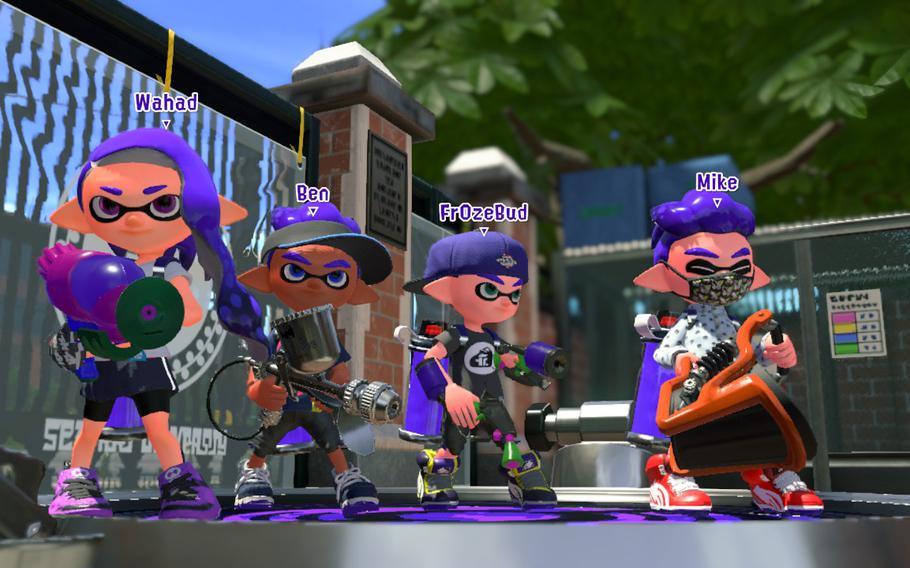 Good teamwork is the difference between victory and ignoble defeat in "Splatoon 2." (Nintendo)

How can it not be a financial success? Mere moments after the first of this uniquely Nintendo-flavored arena shooter was announced in 2014, fan art of the game’s half-squid, half-human “Inklings” began propagating across the web. Within hours, the game had already grown a fanbase of which most game developers could only dream.

The fact that the first game was a charming, immensely entertaining take on the normally grim-toned multiplayer shooter only helped expand that fanbase. “Splatoon” wasn’t a perfect game, but its focus on teamwork and frivolity was a breath of fresh air in a largely-stale genre. Fans responded to the game's charms and helped elevate it to one of Nintendo's premiere IPs.

Given all that, it’s going to surprise absolutely nobody when “Splatoon 2” becomes a massive hit when it lands on store shelves July 21. It’s certainly going to be one of the biggest games of 2017 for the Nintendo Switch.

Needless to say, many fans of the series have not only preordered “Splatoon 2,” but care about a review of the title about as much as my dogs care about advanced Egyptian algebra. But what about the rest of us? The gamers who have no special connection to the "Splatoon" series?

Is the game still worth a purchase? The answer to that question will depend on the type of game you’re looking for.

There is local multiplayer, regular "Turf War" matches, ranked battles, rush mode (called Salmon Run here) and league play. Ranked battles, in typical Nintendo fashion, are locked behind a soft skill gate and open only once you’ve reached level 10 in regular play. Ranked offer up additional modes like Rainmaker, in which you have to bring the titular item to the enemy base and tower control.

Turf War is likely the mode you'll spend the most time in though. In this mode teams of four will face off against each other in a timed battle to see which side can cover more of the arena with its colored ink. The team with the highest percentage of ground cover wins. “Splatting” (killing) an opponent explodes them into a puddle of your team’s color, making fragging a good way to put your team ahead.

Unlike other shooters, however, killing the most opponents isn’t necessarily going to lead to victory. Teams that work together, whether that’s in pushing the other team back by forcing them to respawn repeatedly or simply by picking lanes and holding them, will be more successful than four people trying to rack up as many individual kills as possible.

As an Inkling, ink acts as the primary weapon, mobility enhancer, cover and ammunition refill. With the press of the left trigger, you can switch into squid mode (more games need a squid mode, by the way) and dive into ink of your team’s color. Doing so refills your ink supply, hides you and allows you to travel vertically and quickly.

Combined, these elements turn “Splatoon 2” into something unique. How many competitive shooters really, truly don’t care about your individual kill count? I can think of only a few. How many take what is ultimately a violent battle for victory and turn it into something sort of funny and oddly charming? Probably none. In that, “Splatoon” is unique.

“Splatoon 2” does borrow some industry standards, though. As you play, you’ll earn in-game currency that can be exchanged for new weapon upgrades and clothing items that open up new skills and abilities. The clothing items provide nominal upgrades, like allowing you to go longer before having to fill up your ink reservoir. The weapon upgrades are a vastly different story.

While it’s possible to rack up wins with the initial weapons, there are much better upgrades that must be purchased in order to be truly competitive. This wouldn’t be much of a problem, except for the fact that you’ll have to gain enough experience in battle before being allowed to buy them.

What this means is that at the earliest stages of the game — where newcomers are still getting used to the arenas — they’ll be easy prey for people who simply have superior firepower.

It doesn’t take too long to power through those early levels, but it’s a small annoyance that left me scratching my head. Why not have a more closely-balanced set of weapon tiers, each available at X level and only playable in that tier of competition? Right now, the team with the most Aerospray MGs has a huge leg up over its competition.

The only other real knock against “Splatoon 2” is the developer’s odd decision to not allow people to leave the lobby once they begin looking for a match. This will likely be less of an issue when the game is released to the masses, but if you ever find yourself playing during a slow period, expect plenty of sitting around for minutes on end in a lobby that has no chance of filling up and which you cannot exit.

Other than those two missteps, “Splatoon 2” does everything right. From its rotation of battle maps, to the silly customization options, to the entertaining single-player content, the game has plenty to offer, even to those not particularly entrenched in the fervent fanbase.

“Splatoon 2” might be the most easily predicted financial success of 2017, but it’s also one of the easiest game recommendations of the year. It’s simple. Do you own, or want to own, a Nintendo Switch? Then pick up “Splatoon 2.” You’re sure to have a blast with it.

Grade: APlatform: Nintendo SwitchA copy of this game was provided by the publisher for review purposes.