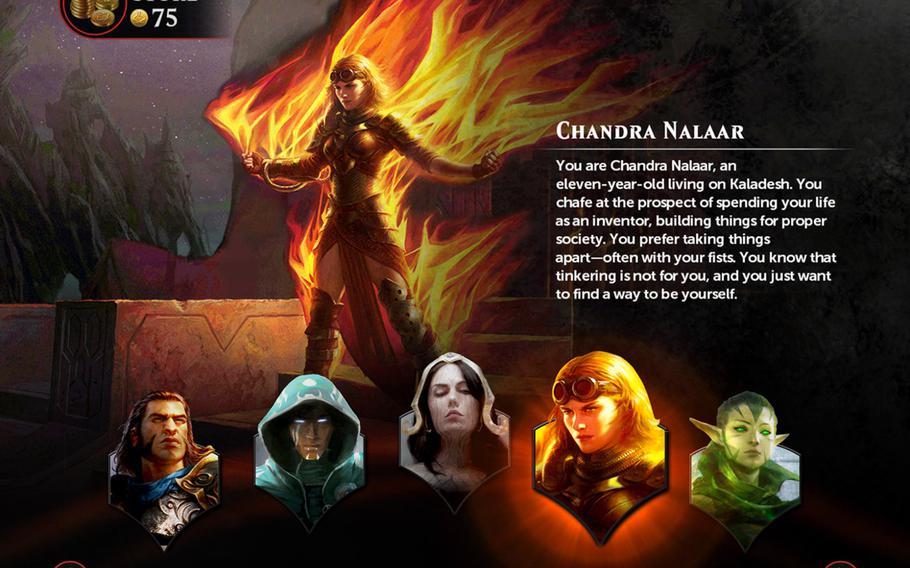 The base game that drives “Magic Duels” is substantially more engaging and tons more fun than “Hearthstone.” But when comparing these two individual products, “Magic Duels” is more a proof of concept than actual competition at this point in its development. (In-game screenshot)

The base game that drives “Magic Duels” is substantially more engaging and tons more fun than “Hearthstone.” But when comparing these two individual products, “Magic Duels” is more a proof of concept than actual competition at this point in its development. (In-game screenshot) 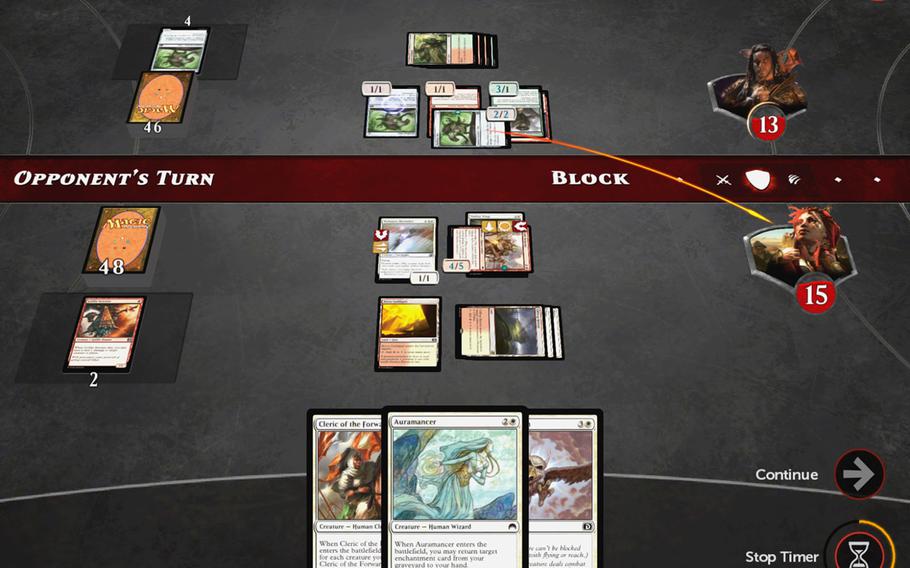 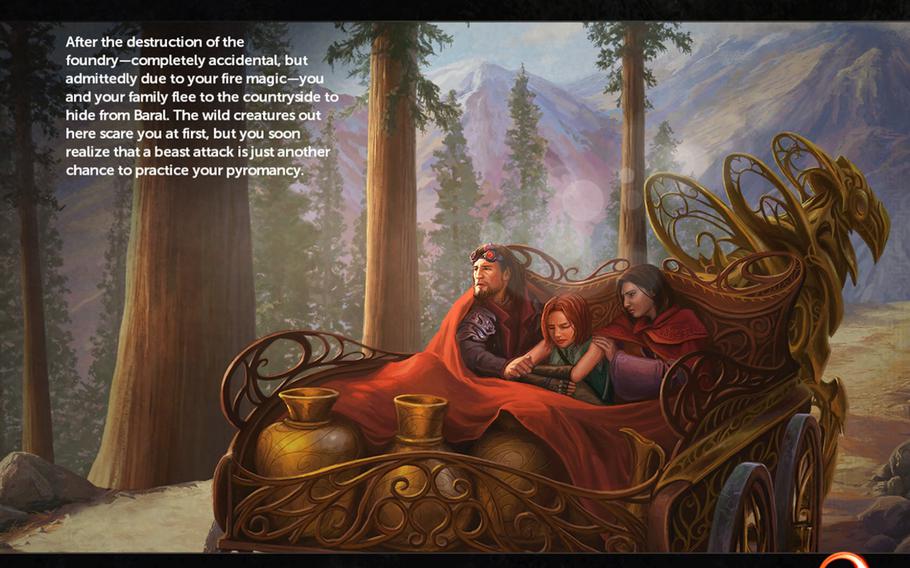 A brief story mode attached to "Magic Duels" tells the backstory of five sorcerers that had been the face of the game since 2007. (In-game screenshot) 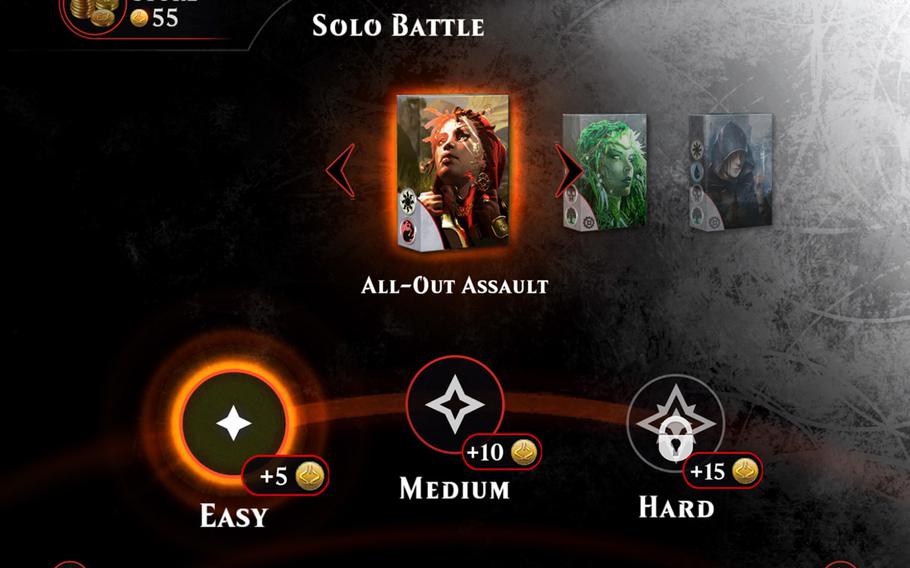 Players earn coins as they rack up wins, complete rotating quests and completing the story mode. Those coins can then be exchanged for semi-randomized booster packs of six cards each. (In-game screenshot) 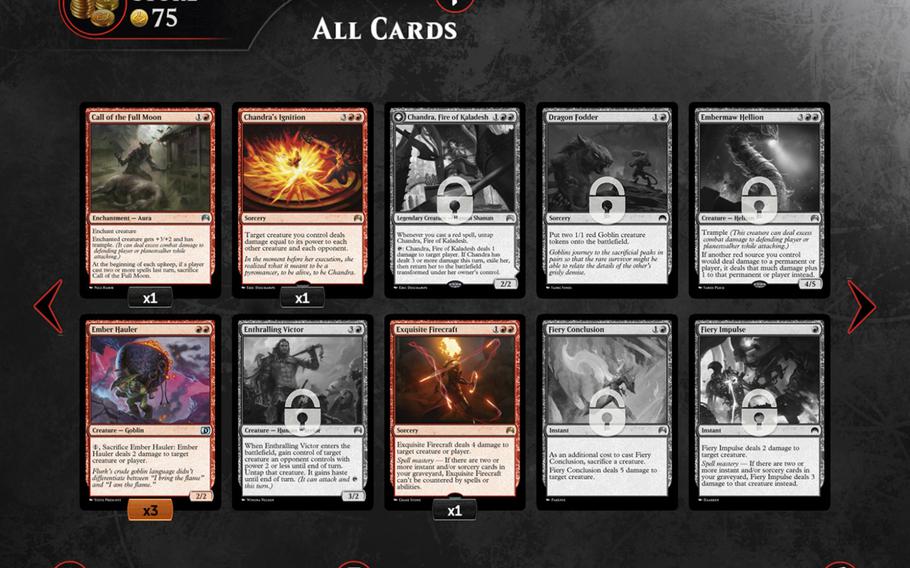 As of right now, the cards players can collect all come from the most recent physical card release from Wizards of the Coast. Both they and the maker of "Magic Duels." Stainless Games, promise more cards are coming. (In-game screenshot) 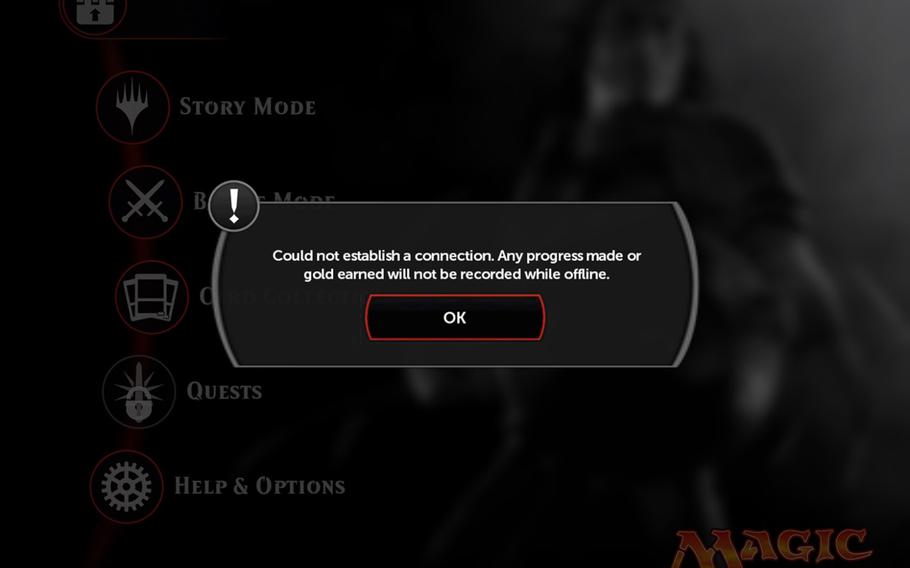 The gameplay in "Magic Duels" is engaging and endlessly addictive, but there are some technical issues that keep the game from reaching its true potential. (In-game screenshot) 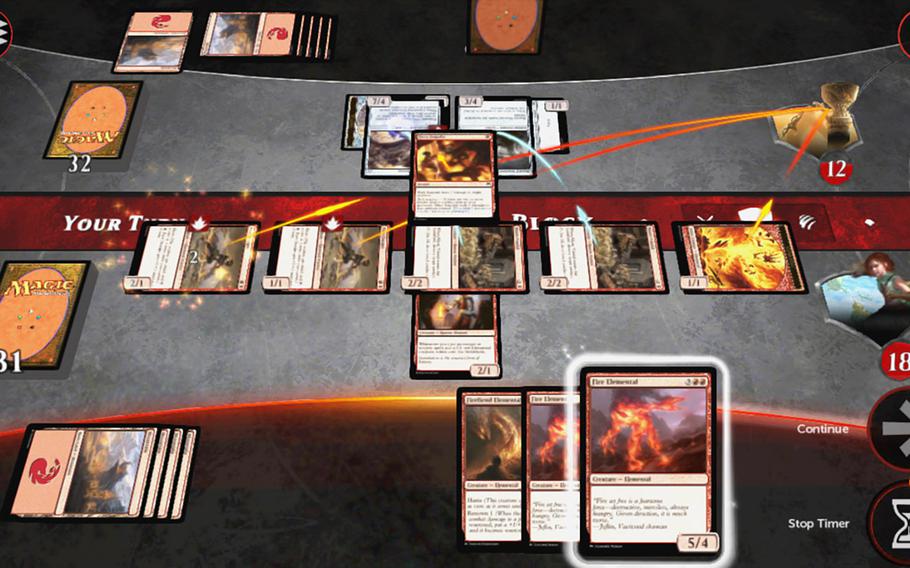 "Magic Duels" is also the first version of the game that is playable on a mobile phone. Some small changes to the user interface is the only real difference between it and the tablet version. (In-game screenshot) 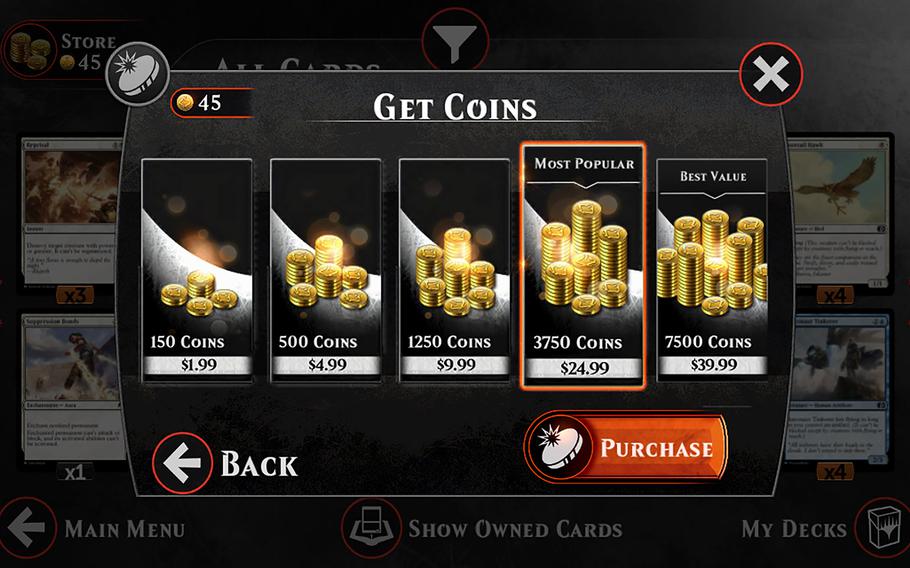 One of the unpleasant side effects of "Magic Duels" being free-to-play includes a hard cap on how many coins a player can earn in a day. At launch, that number was an easily-reached 200, but the developers have since doubled that amount. Now, it takes some real dedication to reach that daily cap. (In-game screenshot)

Before Blizzard Entertainment’s “Hearthstone” upset the natural order of things, there really was only one king of the collectible card game — Wizards of the Coast’s “Magic: The Gathering.”

For the past 20 plus years, “Magic” had become more or less synonymous with the genre, much in the same way Kleenex has become just another word for tissue. Many CCGs came and went, but “Magic” remained and even continued to expand its kingdom with online and casual digital versions of its game.

But as any "Game of Thrones" fan can tell you, no monarch is safe forever. The challenge “Hearthstone’s” 30 million players presented to “Magic’s” business model was simply too big to ignore for long. That’s where the recently released “Magic Duels” comes in.

This free-to-play version of the game that has delighted fans for more than 20 years is a slight offshoot of Stainless Game’s previous “Magic” titles, “Duels of the Planeswalkers.” Stainless is back behind the keyboard for “Magic Duels,” but they have changed quite from its previous games.

Most of those changes can be directly linked back to the success of “Hearthstone.” The most significant change is “Magic Duels” matching of “Hearthstone’s” free-to-play business model.

Previous digital versions of “Magic: The Gathering” had some cost baked into it. “Duels of the Planeswalkers” had an initial entry fee, with a set card and deck pool that could be expanded by buying expansions. “Magic: The Gathering Online” is a direct analgo of the physical card game and requires players to pay for digital cards and packs just like they would in real life. “Magic Duels” seeks to bridge the gap between those two versions.

There is no entry fee to start playing “Magic Duels.” Winning games and progressing through the game’s limited story mode will net players coins they can then use to purchase more booster packs of cards from the online store. Coins can also be bought outright.

As of right now, the only cards players can collect are from “Magic’s” most recent physical release, “Magic Origins.” Certain more powerful cards can be played with in the story mode, but are unavailable for deck building purposes.

Wizards of the Coast and Stainless Games promise that unlike previous iterations, more cards will come down the pipeline for free. Their plan is that “Duels” will become more of a platform than a yearly iteration — much like a certain other digital CCG game.

Like last year’s iteration of “Duels of the Planeswalkers,” the booster packs are only semi-randomized. Once players have unlocked the full amount of a particular card the game allows (One each of a mythic rare, two per rare, thee each of an uncommon and four commons each) they won’t open those cards again. That restriction has both a negative and positive affect on the game.

On one hand, players won’t spend money only to open cards they can’t play with and can’t trade off (as with previous “Duels” games, there is no card trading). On the other hand, when players do open a great mythic rare card, they’re very rarely going to be able to actually play with it.

This change seems minor, but it greatly increases the amount of games decided by luck. Traditional “Magic” deckbuilding revolves around consistency, something that simply isn’t possible as “Duels” is set up now. A few other advanced options from the physical game are missing. Things like sideboards, trading and drafting are enormous parts of the physical game, but are wholly absent in “Duels.”

Outside of that, the game is still very much “Magic: The Gathering.” Players will open packs, build 60 card decks and play against each other in a race to take each other down from 20 life points to none. If you’re a fan of the game, it’s always nice to have a single player Magic experience on the go. If you’re new to the game, the extensive (and oddly mandatory) tutorial does a fantastic job of explaining things.

Returners to the series will notice a few key improvements to the “Duels” formula, as well.

The popular two-headed giant mode returns from “Duels of the Planeswalker 2014” and the interface is greatly improved from last year’s iteration. It’s also available on iOS phones for the first time, which is a huge bonus.

In fact, if it wasn’t for two major glaring issues, “Magic Duels” would easily be the best digital version of the game to date. Unfortunately, those two issues are big ones.

The first is the fact that there is no cross-support between platforms or universal account system. Players gaining coins and unlocking coins on the iPad version will have to start over from scratch should they decide they want to play on a different platform, when those versions are released.

The second major flaw is that progress and unlocked coins/cards are only saved when connected to an Internet connection. If you’re playing on your phone and happen to drift into an area without coverage, you can still play the game, but any progress you make will be erased. Considering the fickle nature of any game’s server, this is simply inexcusable for a mobile game.

There is hope, however. The console and PC versions of the game have been pushed back to a nebulous “later” date, so it’s very possible those two errors are being worked on. If so, then this version of “Magic” is going to become something really special for fans and newcomers alike.

In my opinion, the base game that drives “Magic Duels” is substantially more engaging and tons more fun than “Hearthstone.” But when comparing these two individual products, “Magic Duels” is more a proof of concept than actual competition at this point in its development. It has all the tools to be a great game in the future, but technical issues and legacy design flaws continue to get in the way of its own potential success.

Bottom line: While the game of “Magic: The Gathering” remains as compelling as ever and while “Magic Duels” is one of the best digital versions of the game to date, it still needs some work for it to ascend to greatness.