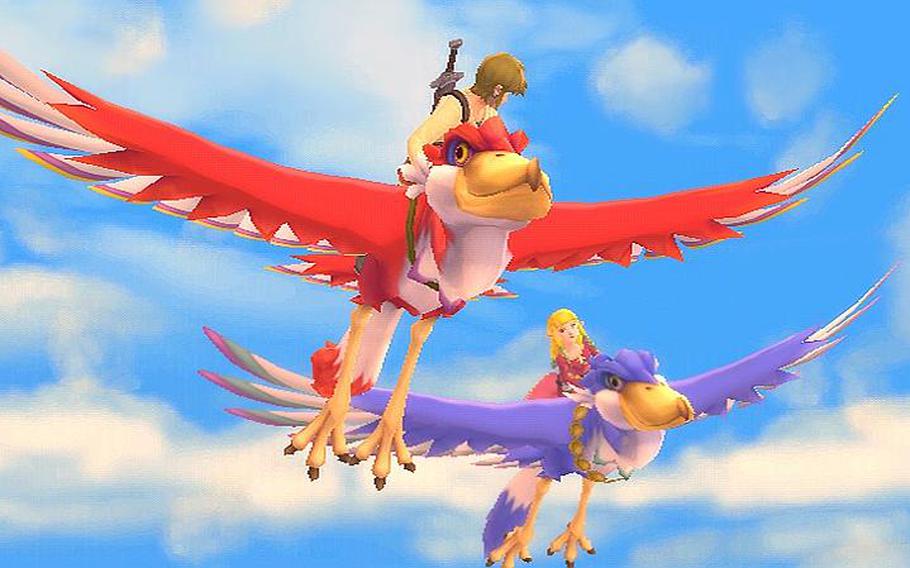 Nintendo recently gave Stars and Stripes a sneak preview of its massive fall and holiday lineup. We&rsquo;ve been eager to get hands on with a couple of their major titles &mdash; if you guessed that &ldquo;Zelda: Skyward Sword&rdquo; was on the top of that list, you would be right. After some hands-on time, however, what&rsquo;s more encouraging is how amazing the 3DS lineup is shaping up for the second half of this year.

&ldquo;Legend of Zelda: Skyward Sword&rdquo; &mdash; It goes without saying that this will be the Wii&rsquo;s last truly great title. We&rsquo;ve been seeing glimpses of it since 2009, and here&rsquo;s what we knew going in: The animation style is a little more cartoony &mdash; not quite &ldquo;Wind Waker,&rdquo; but not the stark, realistic world of &ldquo;Twilight Princess&rdquo; either; all of the swordplay is 1:1 control with the Wiimote, meaning swordplay (the &ldquo;please, please, please use this&rdquo; game idea that went through everyone&rsquo;s mind when the Wiimote was initially unveiled) will finally be fully realized; and this game is a precursor to the &ldquo;Ocarina of Time,&rdquo; which was conveniently just remade on the 3DS.

From a lot of previews, it looked like the controls were lifted from &ldquo;Wii Sports Resort.&rdquo; Bombs are controlled by a bowling motion. Arrows are fired off by mimicking the bow and arrow action. And swordplay, though not player-controlled movement, was also in that game. After feeling the sword fighting first hand, I can confidently say it&rsquo;s more &ldquo;Resort&rdquo;-inspired than straight lifted.

For starters, Link moves his sword much faster, and with a much smoother animation than the armless Mii&rsquo;s in &ldquo;Resort.&rdquo; The enemies as well are very precise with their movements &mdash; you really have to pay attention to when they attack and open up. While I was able to beat the samurai challenges in &ldquo;Resort&rdquo; with my trademarked &ldquo;mad-flailing&rdquo; style (an ancient art), &ldquo;Skyward Sword&rdquo; bosses allow no such nonsense.

In fact, one boss I fought blocked every strike I attempted until I found the right weak spot &mdash; which wasn&rsquo;t a specific strike at all, more of a puzzle. Nintendo reps assure me that puzzles are making a huge comeback in this game. We should expect a blended, organic approach to dungeons as well.

&ldquo;Kirby Wii&rdquo; &mdash; One of the lesser-known titles Nintendo showed off was &ldquo;Kirby Wii.&rdquo; This co-op game will be familiar to anyone who remembers classic Kirby: sucking things up, absorbing powers and generally causing large amounts of mayhem in a side-scrolling fashion.

Unlike critical darling &ldquo;Kirby&rsquo;s Epic Yarn,&rdquo; this game lets up to four people jump in at any time. Other players take control of classic characters in the Kirby world, such as King Dedede and Meta Knight &mdash; immediately familiar to anyone who&rsquo;s spent some time in &ldquo;Super Smash Bros. Brawl.&rdquo; A new super-powerup mode in &ldquo;Kirby&rdquo; actually harkens back to &ldquo;Brawl&rdquo; as well: Suck up a large fire-covered baddie, and you are suddenly given a huge sword. Large weaponry can take out enemies and even parts of the level, unlocking hidden areas. Though it might not have all the subtle, cleverly woven charms of &ldquo;Epic Yarn,&rdquo; this Kirby does ramp up the action quite a bit. It&rsquo;s a great contender to keep your eye on if you&rsquo;re looking for some kid-friendly mayhem on the Wii later this year.

Well, maybe not that last part.

But hang gliders, which brought a huge smile to my face when I first saw them unveiled at E3, do indeed make up a large part of the new &ldquo;Mario Kart.&rdquo; Just like the &ldquo;tricks&rdquo; in &ldquo;Mario Kart Wii,&rdquo; they basically allow you to extend your time in the air after a large jump. By allowing you to control your descent that much more, however, this change allows for a lot more strategy.

This Kart doesn&rsquo;t stop there, though. You can also change your tire size to alter your handling in the dirt and underwater &mdash; that&rsquo;s right, this is the first &ldquo;Mario Kart&rdquo; that encourages you to swim through water. All-terrain exploration is encouraged with the addition of coins (presumably for speed, though my Nintendo rep wasn&rsquo;t positive on that point) scattered underwater, on the ground and in the air.

The 3DS version also brings the series back to eight players, which means fewer chances for blue shell spamming from behind if you make it to the front of the pack. We didn&rsquo;t get to play it online, but if they&rsquo;ve eliminated snaking and can stop the rampant online cheating that plagued the Wii version, we may finally have a new, all-terrain champion in the &ldquo;Mario Kart&rdquo; series.

&ldquo;Kid Icarus: Uprising&rdquo; &mdash; Another 3DS offering that looks like a must-have: &ldquo;Kid Icarus: Uprising.&rdquo; This is the comeback kid that originally helped showcase the 3DS at its E3 unveiling, and it&rsquo;s looking absolutely spectacular. The closest approximation to the game play would be &ldquo;Sin & Punishment 2&rdquo; on the Wii &mdash; sort of an evolved Galaga-style shooter. Like &ldquo;S&P2,&rdquo; this game is fast-paced, detail-oriented and lots of fun. Also like that game, players can score big combos by attacking in the right patterns and memorizing how a level unfolds.

Icarus is split between time in the air &mdash; where the level is generally on rails, and time on the ground which is free for the player to explore. Movement is controlled by the thumb pad, while targeting is done by moving the stylus across the touch pad. Just like &ldquo;S&P2,&rdquo; you can melee attack, shoot rapid fire, or charge up a shot all with the same button &mdash; in this case the L shoulder button. You can also quick dodge by double tapping a direction on the thumb pad. Combat was fast and hectic &mdash; on rails while you&rsquo;re in the air, but free roaming if you&rsquo;re on the ground.

Aiming was OK, though I hope Nintendo includes an ability to up the sensitivity of the touch pad as I often found myself reaching the end of the screen. What&rsquo;s really breath-taking in this game is the fast-paced, great-looking action. The game never stuttered as it flooded the screen with enemies and objects. Our demo concluded with a boss battle that really showed how powerful the little 3DS can be &mdash; a fire-covered wolflike creature looked to stand about three stories tall.

Though we didn&rsquo;t get to try it, Nintendo mentioned there were several other aspects of the game they&rsquo;re not yet fully showing &mdash; including 3-on-3 team multiplayer and new augmented reality cards that will tie into another type of gameplay. Anyone looking for the first truly original, creative and challenging hard core game on the 3DS should keep an eye out for this.

However promising things are looking, Nintendo reps were scant with specific release dates. Though the handheld market is treated a little differently, Nintendo usually likes to open the flood gates of great games for one year after launch of a new system, but later space out AAA titles so they come every two or three months. In other words, don&rsquo;t get your hopes up that we&rsquo;ll see all of these games this year. That said, all of the titles I saw looked really far along and well polished. Nintendo is also planning to release AAA titles such as &ldquo;Super Mario 3DS&rdquo; and a &ldquo;Starfox 64&rdquo; remake this year. Hopefully, we can get some more hands-on coverage of those as Stars and Stripes heads to the Penny Arcade Expo 2011 in August. Until then, good game.