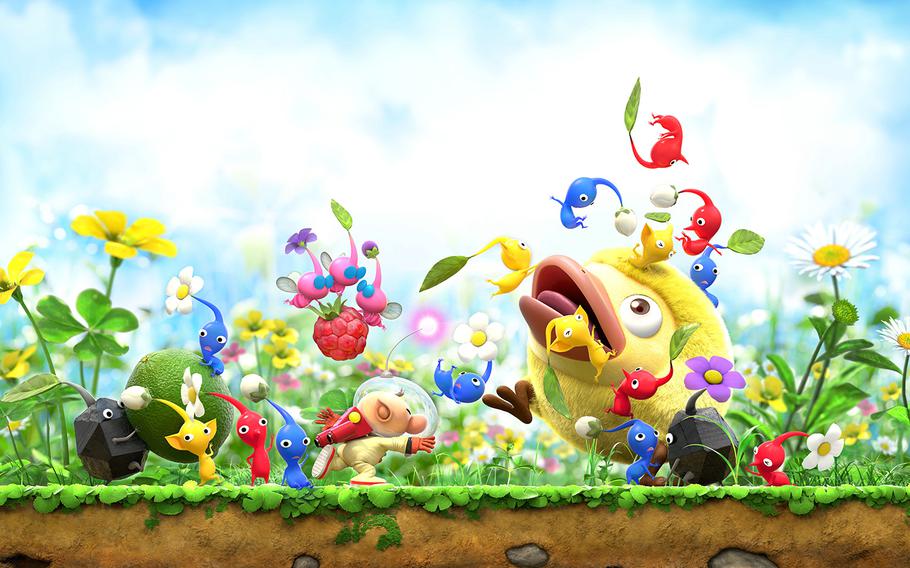 "Hey Pikmin" brings the lovable, colorful garden critters fans of the long-running "Pikmin" series have come to know and love to handhelds for the first time. (Nintendo)

The series, which started on the Nintendo GameCube more than 15 years ago, has captured naturally the type of audience many franchises work very hard to obtain. Its mix of colorful, unique settings and friendly crowd-management real-time strategy appealed to players both young and old, casual and hardcore.

Fans of the series will be happy to know that none of that has changed as the Pikmin have jumped from console to handheld. The series’ trademark warmth and laid-back approach to gaming has remained intact. What has changed, though, is the core gameplay and, to some extent, its universal appeal.

“Hey Pikmin” drops the real-time strategy flavor of the console iterations in favor of a more puzzle-light type of affair. Rather than trying to corral groups of differently skilled Pikmin, series hero Captain Olimar now directly flings the Pikmin to overcome obstacles. Is there a creature in the way? By tapping on the screen with either the stylus or a fingertip, Olimar will happily chuck Pikmin into the creature’s face to kill it.

Olimar, once again finding himself marooned on a strange planet, must use the help of the native Pikmin to collect enough glowing Sparklium to get his ship moving again. He’ll collect strange, foreign artifacts like rings and toothpaste that are hidden in the two-dimensional stages.

Each level contains three of these artifacts and all are worth large amounts of Sparklium. Collecting all of them is the key challenge of “Hey Pikmin.” As you gain Sparklium, you’ll unlock new abilities, such as a larger health bar and the ability to call up a map of the world.

There are different types of Pikmin to discover across the different stages, from the hard-headed rock Pikmin to the high-flying pink Pikmin. Each has different abilities that can be used to overcome specific types of obstacles across the levels. Yellow Pikmin can form an adorable little conduit for electricity to flow through in order to open up extra areas of the levels, for instance.

The levels are designed fairly cleverly, with plenty of verticality to keep the overall exploration from becoming too stale. They’re also built in such a way that it’s clear we’re meant to replay them, but there are several factors that will keep most players from doing that.

First, some of the ways the level forces you to choose paths blindly means you’ll miss a needed collectible simply because you went left instead of right, leaving you with no option other than restarting the level to collect it. I feel the game would have been better served with fewer arbitrary barriers to backtracking.

The second reason replaying levels becomes a chore is because Olimar moves very slowly. “Hey Pikmin” isn’t a platformer or an action title, so some amount of methodical movement can be understood.

The game is largely about slowing down and enjoying the charms of the miniature Pikmin universe. But Olimar’s lackadaisical meanderings shoot straight past relaxing and into frustrating.

“Hey Pikmin” is at its best when you’re using different Pikmin types to overcome obstacles in a single level. While frequent later on in the game, in the early stages, you’re really just moving to the right and occasionally flinging Pikmin at collectibles.

There isn’t a challenge to this game whatsoever, which is fine, as it’s not trying to be “Dark Souls: Nintendo Edition,” but it is something to keep in mind. I found myself bored in the early parts of the game, but that gave way as the game progressed to a more bemused, muted interest.

That being said, I’m a jaded older gamer. I’m clearly not the target audience for this. If you’re looking for a gift for a younger player, or a gamer who just wants a relaxing, non-stressful experience, “Hey Pikmin” could be what you’re looking for.

After all, one man’s slow-paced game is another’s relaxing escape from a stressful day.