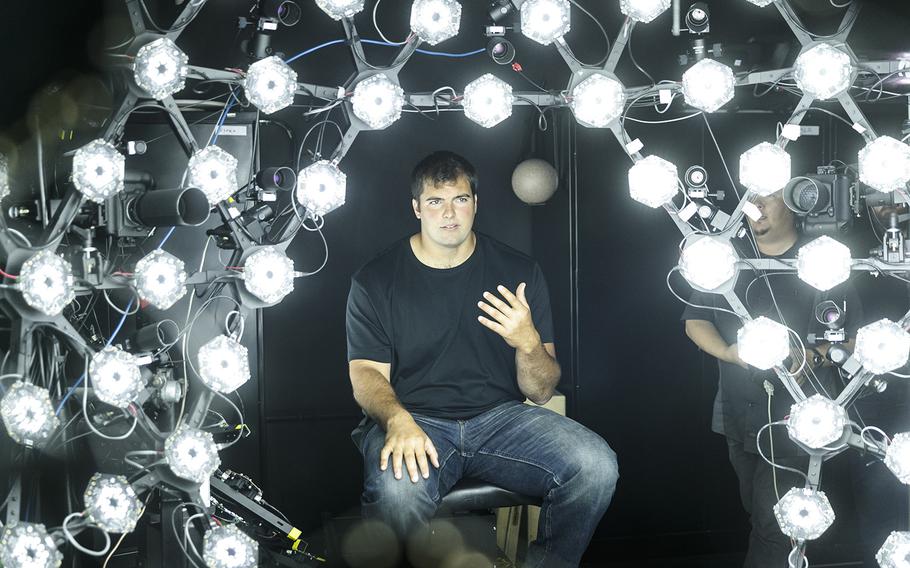 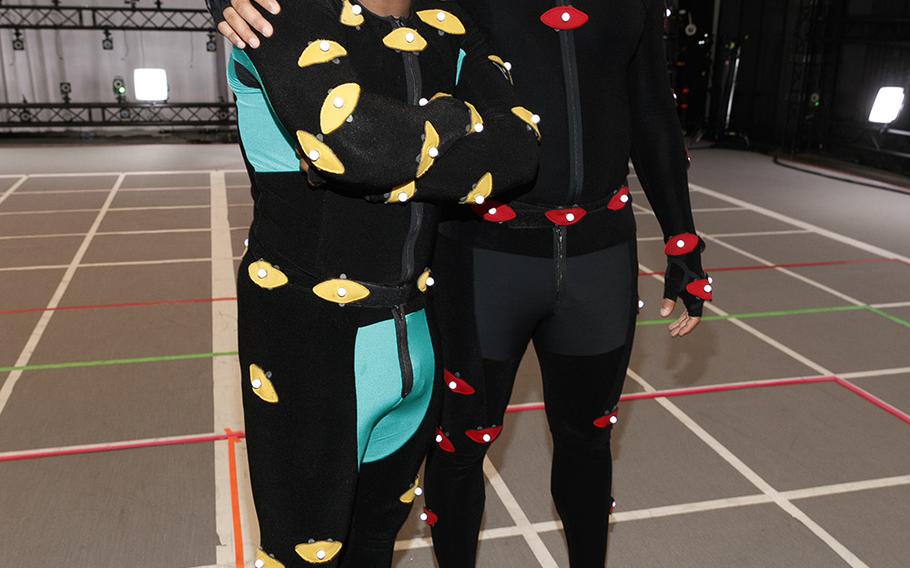 Alejandro Villanueva, former Army Ranger and current NFL star, is playing a role in this year's "Call of Duty: WWII." Villanueva and star NFL runningback Le'Veon Bell, pose during their motion capture session for their characters in the game. (Polk Imaging) Alejandro Villanueva, former Army Ranger and current NFL star, is playing a role in this year's "Call of Duty: WWII." Villanueva poses next to a model of his character in the game. (Sledgehammer Games)

Barracks rooms across the world soon will be filled once more with the sounds of explosions, gunfire and cries of foul play, all indicating that another “Call of Duty” has been released into the wild.

This time, it’s “Call of Duty: WWII,” the venerated series’ return to the battlefields of the second world war. While the franchise began as a gritty, first-person shooter aimed at replicating the war between the Allies and Axis, it has spent many years since delving into modern and near-future battlefields.

Fans of “Call of Duty,” even those turned off by the science fiction-heavy “Infinite Warfare,” have taken a great interest in the return to the series’ roots. This includes the innumerable Marines, soldiers, sailors and airmen who will be spending the weekend fragging and being fragged. Among military folks, “Call of Duty” has long been a barracks room favorite.

Villanueva and teammate Le’Veon Bell both appear in this year’s “Call of Duty.” Bell, stud running back and savior of fantasy football leagues everywhere, is one of the first characters players will meet when booting up the game for the first time. Villanueva will be one of the soldiers at the firing range at the new “Headquarters” multiplayer mode.

Activision, publisher of the series, brought the two athletes on as the first set of teammates to be featured in a Call of Duty title.

“They reached out to me and the only question they asked me is – do you play ‘Call of Duty?’” Villanueva said. “I got really excited.”

“Anybody from my generation … it is like being a character in Star Wars. It’s a huge honor to even be considered to be a character. Even though I had a small role in the game … the fact that they selected me to do it was awesome.”

This year, Sledgehammer managed to nab not only one or two of the biggest names in the NFL today, but they’ve also enlisted a man who has spent plenty of time in actual combat.

As a rifle platoon leader in Afghanistan in 2011, then-Lt. Villanueva and his men came under ambush by the Taliban. According to an interview he gave to ESPN, Villanueva carried a wounded soldier, Spc. Martin Piggott, to safety following the ambush. Another soldier, Pfc. Class Jesse Dietrich, died in the same ambush.

To some, it might seem odd that a man who has seen firsthand the destruction of war would choose to participate in a video game about combat.

To Villanueva and a host of other servicemembers past and present, it’s no stranger than Audie Murphy or R. Lee Ermey playing fictionalized versions of themselves in a Hollywood flick.

“If you were to take a millennial – any average millennial right now – and on a pie chart just sort of time allocate things they pay interest … something that is really, really big on that pie chart, from the time we were able to hold a controller, is video games,” Villanueva said.

He said he grew up playing video games and never really dropped the habit. Even when deployed, he found time to play.

“I used to do real-life missions, real-life ‘Call of Duty’ in Afghanistan, and then come back to a real-life forward operating base and play ‘Call of Duty,’” he said. And he’s not alone.

“It doesn’t matter almost to a certain degree even what kind of background you come from, whether you’re rich, poor, black, white, Hispanic – people love playing video games,” he said.

Now, the former Ranger continues to find time to pick up the sticks. After a game, he even uses video games as a way to unwind and to test his mental acuity. The Steelers locker room has a video game area, and Villanueva said the team “is going to be battling it out to see who gets the crown of ‘Call of Duty’” when the game is released Nov. 3.