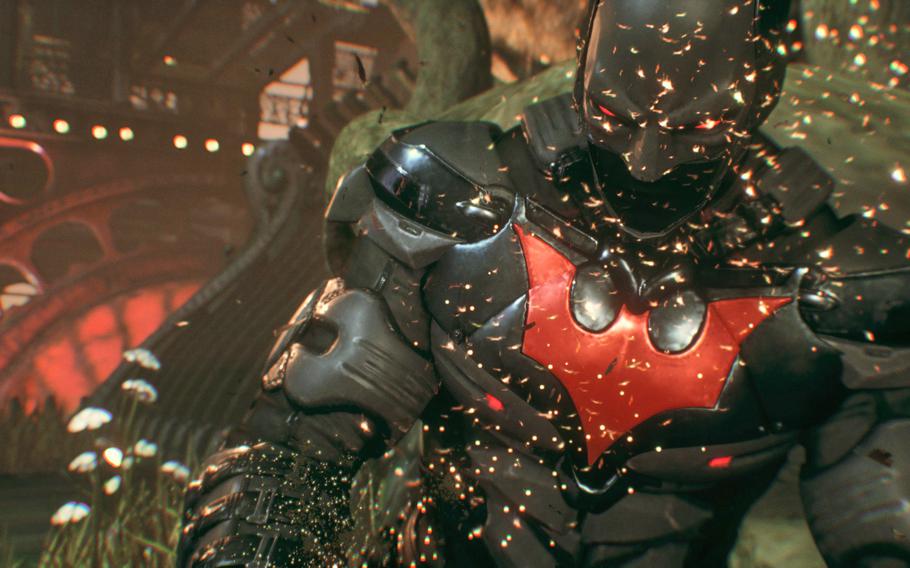 When compared to the other Arkham games, "Batman: Arkham Knight" sits far below those titles. But when compared to every other single Batman game ever made, it still comes out near the top. (In-game screenshot)

When compared to the other Arkham games, "Batman: Arkham Knight" sits far below those titles. But when compared to every other single Batman game ever made, it still comes out near the top. (In-game screenshot) 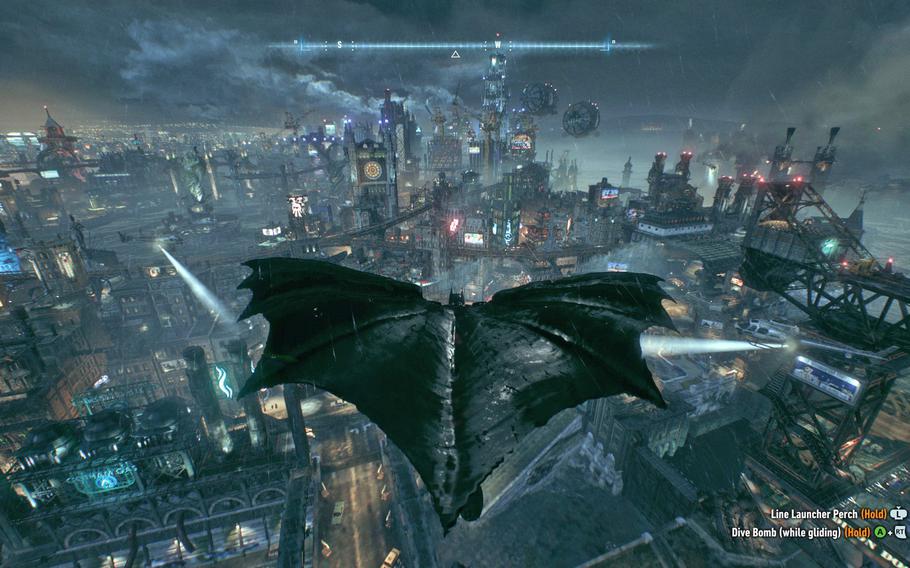 Gotham City is broken up into three fully explorable islands in "Batman: Arkham Knight," and each are packed with things to see and do. (In-game screenshot) 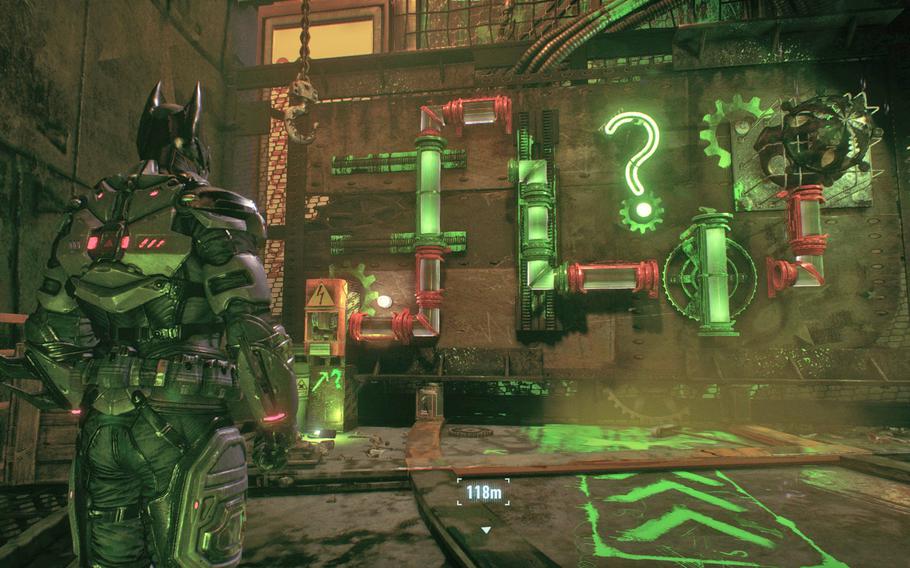 The Riddler and his puzzles return for one last challenge in "Batman: Arkham Knight." Some are easy to solve, some are difficult and all of them must be completed to see the true ending of the game. (In-game screenshot) 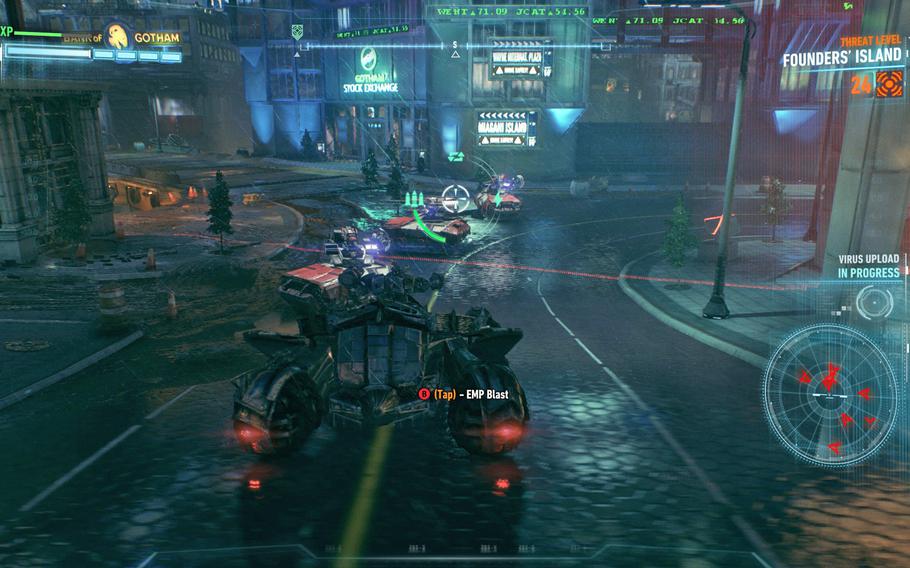 The Batmobile, for better or worse, features heavily throughout the entirety of "Batman: Arkham Knight" and influences everything from combat to puzzle solving. (In-game screenshot) 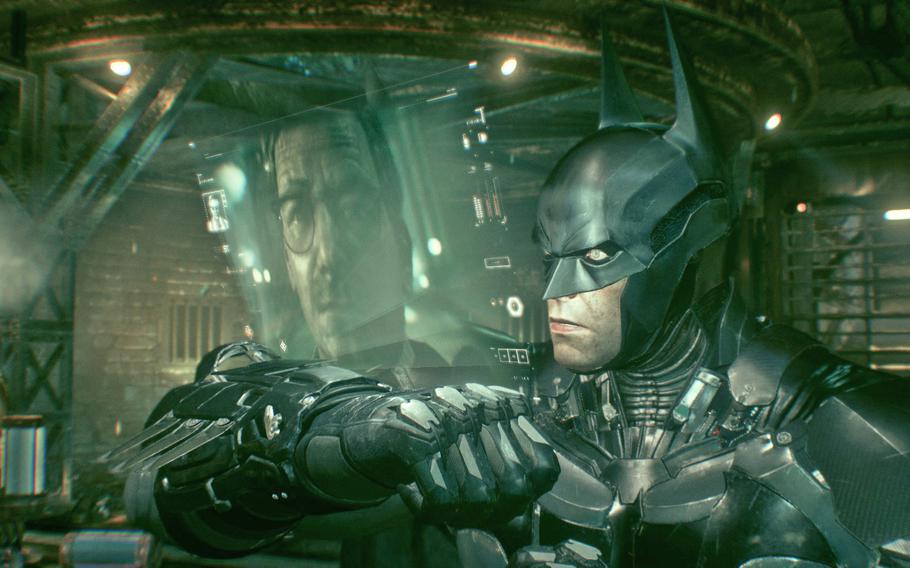 Batman spends more time getting to know his comrades-in-arms a bit more in "Arkham Knight" than he had in the past three games. (In-game screenshot) 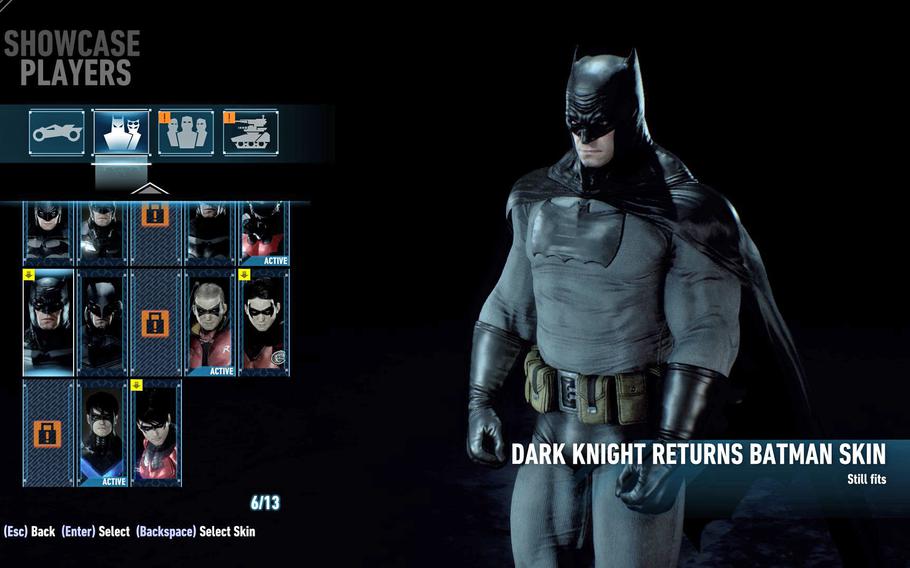 Though the game was pre-ordered and paid for at full price, several pieces of content remain locked away behind retailer-specific pre-order walls and a season pass offering up a nebulous deal for fans. (In-game screenshot) 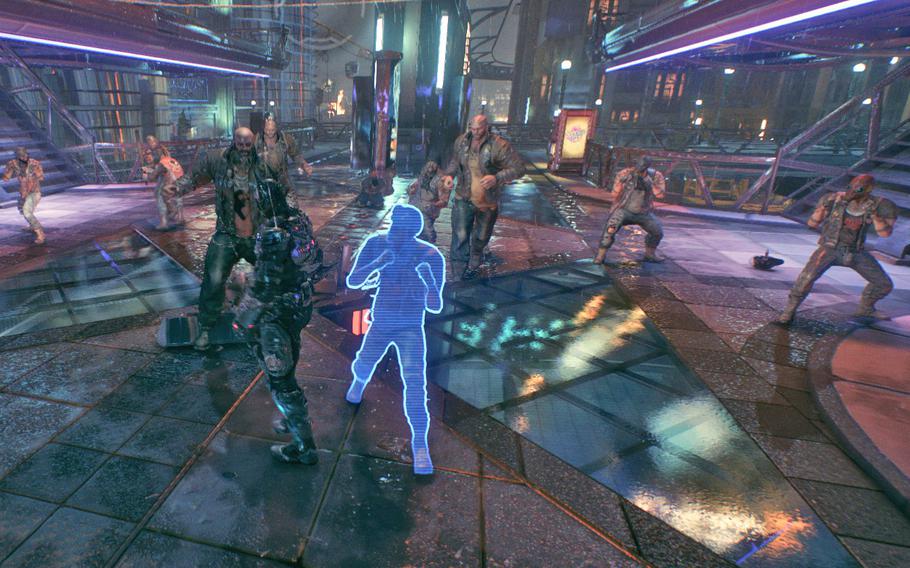 The combat in "Arkham Knight" is pretty indistinguishable from the fights in the past game. Batman does get a couple of new moves that bring some new elements to the fight, but overall the flavor and mechanical difference is negligible. (In-game screenshot) 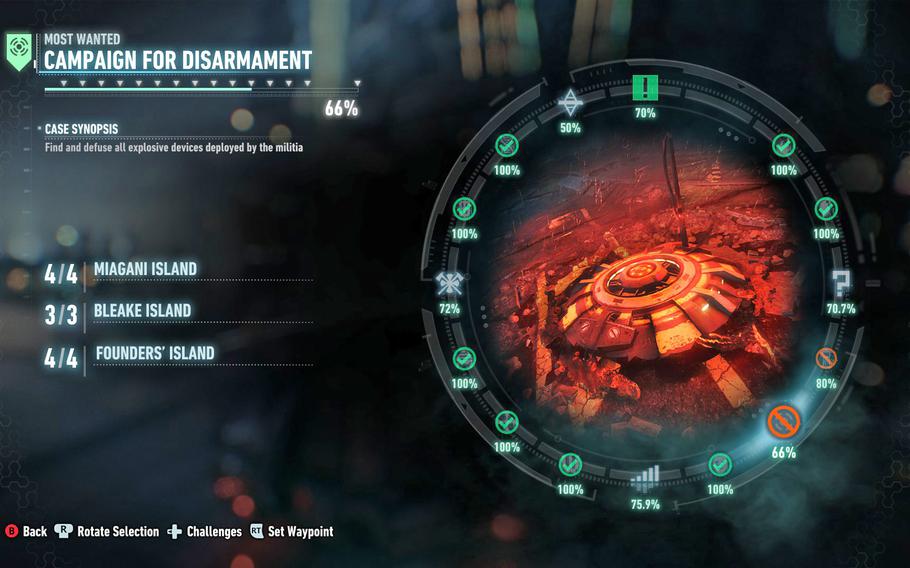 Missions can be tackled in any order, though most of them are time locked to specific points in the game and all of them wear out their welcome well before the 100 percent completion point. (In-game screenshot)

“Batman: Arkham Knight” bookends a series that redefined gaming’s depiction of what a Dark Knight game could be, and also the superhero genre in general.

While Batman has fared well in other pop culture adaptations, his video game track record had been less than stellar before the relatively untested studio launched the now-classic “Batman: Arkham Asylum” in 2009.

Since then, nearly every game featuring a crime fighter has been compared to the Arkham series, and for good reason. Very few developers before or since really understood how to make a great superhero game that didn’t just do the character’s mythos justice, but was also able to add to it in a meaningful way.

“Arkham Knight” is (for the moment) Rocksteady Studios’ final punctuation on what has become an acclaimed addition to both video games and a venerated character’s 76 year old backstory.

Sadly, that mark ends up as more of a period and less of the exclamation mark the series truly deserved.

The central premise of the latest entry is that the city is under attack by the Scarecrow and a mysterious new villain - Arkham Knight - who seems to know everything about the Batman. He’s brought along a literal army of soldiers and tanks, as well as gathered together Batman’s worst villains, in his quest to finally kill the bat.

With the exception of the mystery of who Arkham Knight is, the plot is a rehashing of every other Arkham game to date. In the past games, it was a bit more forgivable because it felt fresher. Now in its fourth reheating, the story has lost much of its flavor. It doesn’t help that much of what drives the story is the secret identity of the new villain in town.

But even the inevitable reveal falls flat, largely because the twist relies on players having formed an emotional connection to a character they had never met until this game. Comic fans will know who the character is well in advance, so the twist falls doubly flat for anybody familiar with Batman’s backstory.

Luckily, the returning cast of characters are more engaging. All of the fan favorites, including the Riddler, the Penguin, Harley Quinn and a few surprise guest appearances return. Jim Gordon and Oracle both feature more prominently than they did in the past games. Most of the characters get some sort of defining moment or sendoff, helping to salvage the main story somewhat.

As for the gameplay, there really is only one new element to talk about – the Batmobile. For the first time in the series, players will jump behind the wheel of the legendary car and cruise along the backstreets of Gotham at 200 miles per hour. When the going gets particularly rough it can transform into a tank, complete with machine guns and a 60mm cannon.

On paper, that sounds amazing. What kid hasn’t dreamed of driving the Batmobile? But instead of the Batmobile being the major selling point of the game, its poor handling and dull gameplay mechanics cause it to become the lowest point in perhaps the entire series.

And there is no escaping it. Rather than the vehicle being a nice addition to Arkham Knight, it takes over as the main focus of the entire game.

The problems with that aren’t as apparent when using the Batmobile’s various gadgets to solve puzzles, but it becomes a serious flaw when involved in any of the numerous tank battles. Each of those battles will play out exactly the same, and there are dozens of them in the game. Several of which can’t be avoided and more than few of which will become mind-dulling boring before you’ve killed your 30th out of 60 attacking tanks.

As an addition to the series, the Batmobile could and should have been great. But during the course of “Arkham Knight” it becomes so overused, from the aforementioned combat slogs, to having to use it so solve riddles that I came to severely dislike it. It’s simply too much of this bland task over and over again.

The same thing can be said about much of the rest of the game, actually. While the core game elements of stealthy takedowns and free-flowing combat never really get old, they haven’t really changed too much, either. Batman now has access to a powerful move that can instantly eliminate five enemies all at once, but if you’ve already grown tired of the same combat and stealth sections, there isn’t much new here to explore. And what little that is new becomes just as overused as the Batmobile.

As Batman goes about taking back Gotham from the invading army, he will have to take down enemy towers, roadblocks, clear the roads of mines and finish dealing with each supervillain individually. Each of those elements starts of great, but becomes tiresome because of the amount of repetition built into each segment

For instance, players will take down more than a dozen towers, each in almost exactly the same way. What’s more is the fact that the final towers won’t appear until an arbitrary point in the storyline. This goes for nearly every sidequest, some of which require you to stumble into the trigger that lets you continue onward. It’s almost like they took a normal Arkham game and then stapled a free-to-play style time waster on to it.

The worst part is that while much of the tank combat and sidequesting is technically optional, it’s really not. To get any real ending to the game, you will have to complete a certain amount of the sidequests. Otherwise, the game just sort of continues on.

In order to view the true ending to the four game series, players will have to complete 100 percent of every aspect of the game, to include finding all 200 plus of the Riddler’s trophies and clues.

Fans who simply want to see the ending to what amounts to a six year long buildup are best served just going to YouTube. That’s not the way to end a story.

Up until that point, the story does do a great job of continuing and ultimately concluding the series exploration of the relationship between Gotham, Batman and his host of villains.

Fans will be happy to know the true ending, while weak in places, does bring the series to a definitive and satisfying conclusion. It’s just too bad that ending is locked behind having to find 243 widgets hidden across an enormous game world.

Really, that’s the basic underlying problem with much of “Arkham Knight.” It’s a great game that becomes cluttered with so much repetition and mundanity that it becomes mediocre.

That mediocrity doesn’t end with just the gameplay. There have been, and continue to be, a host of problems revolving around the game.

DLC remains locked based on where the game was purchased and when, or hidden behind a “season pass” that so far doesn’t much seem worth its additional 40 dollar cost. The DLC that is available now is either of the cosmetic kind, or of the kind that can be completed in less than an hour.

The game is packed with enough content that the initial purchase price is reasonable, but as it stands now the DLC simply isn’t worth the money.

As a PC-first gamer, I also have to mention the plethora of bugs in that version of the game. While I was able to play the game to completion on a medium power rig, I had to do so with most of the graphical enhancements turned off. Running anything less than the lowest textures requires an astounding 3GB of VRAM, meaning most PC players will have to play through the game looking at a muddied mess.

Well, the players who were able to buy the game before it was pulled down from Steam for its many technical issues, at any rate. I wasn’t exempt from the issues, either. I mention this just to offer up a recommendation that players take a look at the more complete PlayStation 4 or Xbox One versions of the game.

Because despite its flaws, I would still hesitantly recommend “Batman: Arkham Knight.” When compared to the other Arkham games, it sits far below those titles. But when compared to every other single Batman game ever made, it still comes out near the top. I would recommend picking the game up, playing it until you’re bored with blowing up tanks and taking a break for a couple of days before returning to it. Perhaps then the repetition wouldn’t be so pronounced.

“Arkham Knight” is frustrating in pace, packed with junk missions and (on PC) not especially technically sound. But it does offer up a conclusion to a much-beloved series. Fans of the series will find plenty to love here, even if much of it is buried beneath some not-so-fun elements.

Bottom line: While not the best entry in the Arkham series, “Batman: Arkham Knight” still has plenty of content to keep fans entertained, if they can overcome the monotony baked into the experience.