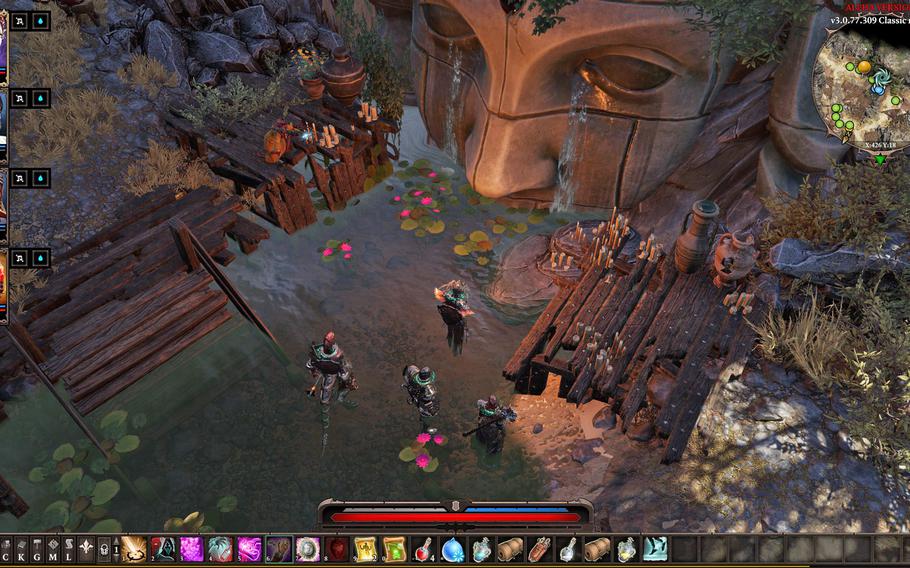 The game master mode in "Divinity: Original Sin II" lets you and other players play through custom game campaigns of your own creation. (Larian Studios) 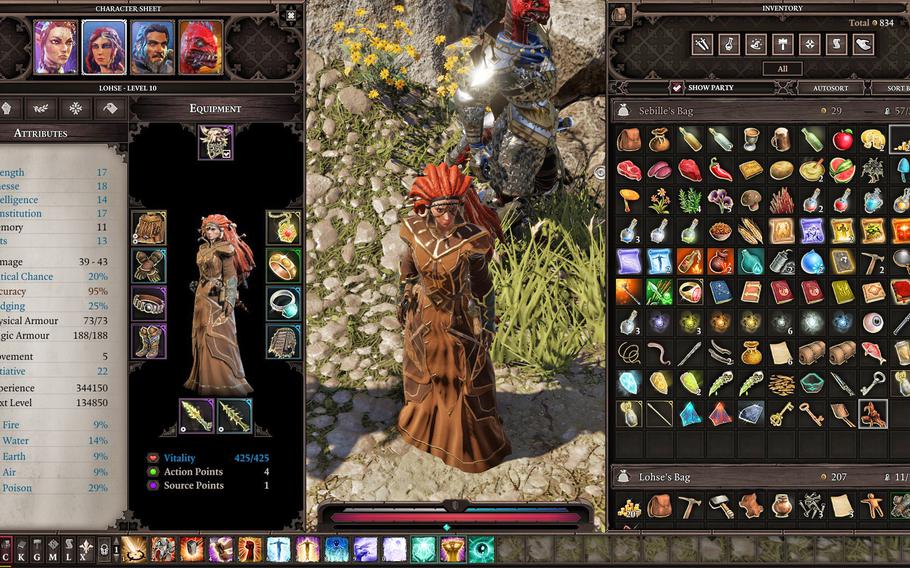 Throughout your adventures in "Divinity: Original Sin II" you'll collect treasures galore. More than you can reasonable keep track of, in fact. (Larian Studios) 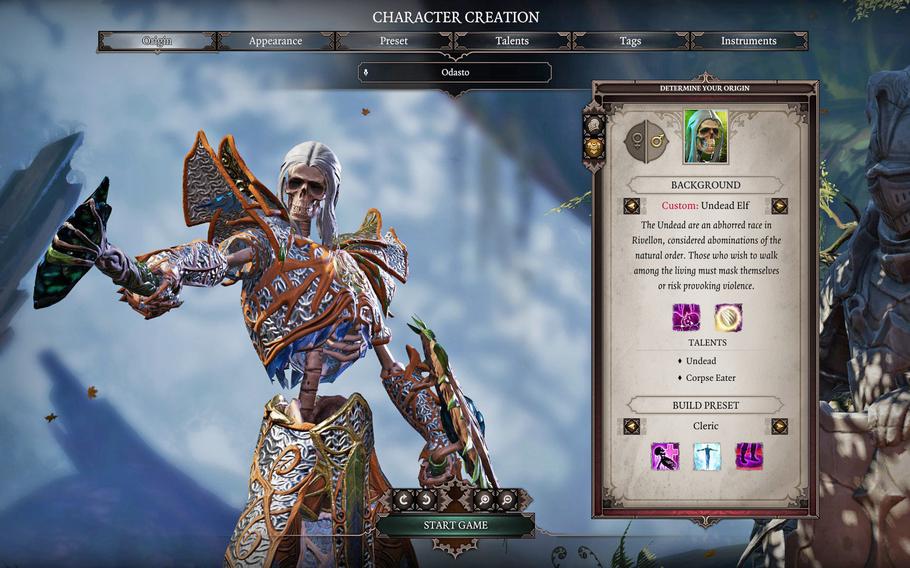 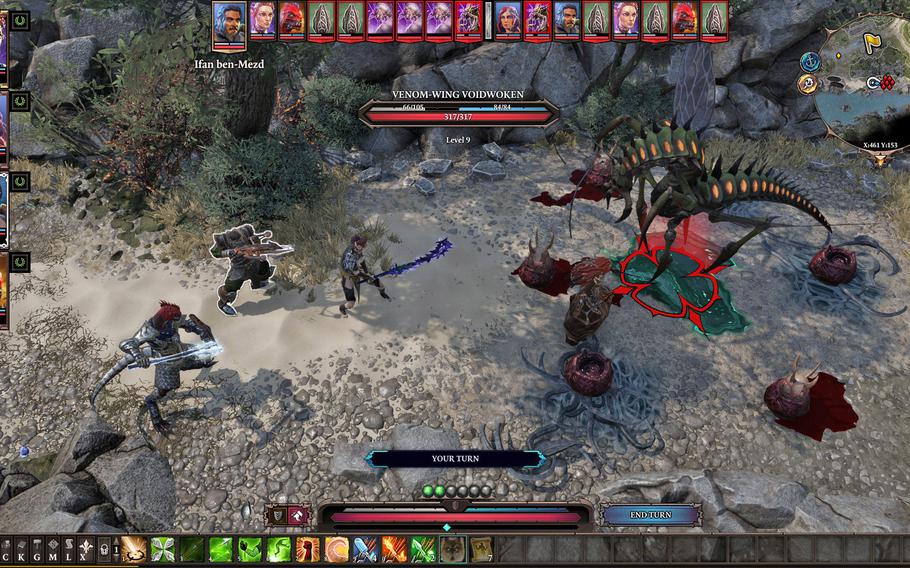 "Divinity: Original Sin II" is easily among the best games of 2017 and is certainly the best party-based role-playing game of the year. (Larian Studios)

I have a bit of a confession to make. I didn’t enjoy "Divinity: Original Sin."

The Kickstarted roleplaying game was definitely interesting, I’ll give it that. However, the combat difficulty was too uneven, the characters were paper dolls devoid of any personality and the humor fell flatter than an Illinois landscape.

This admission will certainly draw ire from my fellow RPG nerds, as the game was simply adored by the dice-and-dragons crowd. Not that I blame them.

For all the rough edges, the turned-based combat system in “Original Sin” was resplendent with options. And the world Larian created was wholly unique, with nary a whiff of Tolkien’s inspiration. Its focus on its co-op multiplayer campaign was inspired.

If only, I thought at the time, Larian could take what worked in the original game – the combat, the setting, the multiplayer mode — and fix the broken bits, they’d have a bona fide classic on their hands.

It seems as if these complaints were common enough that Larian took note. The recently released “Original Sin 2” takes everything great about the original and improves it, while cutting back on the annoyances that weighed down the original.

“Original Sin II” is once again a party-based roleplaying adventure, with all the questing and fantastical elements the genre demands. The world is one of pirates and skeletons, of sentient lizards and of magic that is as dangerous as it is exciting.

You’ll start off by choosing your character class and build. With 14 classes and 5 different races, there’s a dizzying array of options. Want to play as a wizard elf with a penchant for picking locks? Or maybe an undead skeleton lizard warrior that talks to mice? Go for it.

You can also (and this really is optimal) choose from one of six pre-designed characters to use as your main avatar. These include an assassin by the name of Ifan Ben-Mezd, the possessed singer Lohse, the vengeful necromancer Sebille and The Red Prince, lizard royalty in exile, Each has a unique personality and backstory, so choosing one of them opens up unique dialog and quests in the world.

While each of the characters’ story bends them toward certain classes, you can change them as you see fit. The characters you didn’t choose will show up as party members during the campaign and you can customize their classes and abilities upon agreeing to adventure with them.

In short, in “Original Sin II” you can play however you’d like. It really is up to you.

Once your avatar is selected, you’ll find yourself confined on a ship, heading toward a prison isle where you’ll serve out a life sentence. Your crime? Being a powerful “sourcerer,” a magical entity that draws from the very essence of life itself and in the process, brings into being powerful demonic creatures known as “voidwoken.”

From that premise, much of what happens – or doesn’t happen – is left up to you, the player. While there is an overarching plot involving dying gods and ascension to a higher plane of existence, the real meat of “Original Sin II’s” story is found in smaller encounters scattered across the world.

In my play-through I’ve rescued chicken eggs from monstrous creatures, uncovered murderers, saved a lizard from the gallows and extinguished eternally inflamed piglets. There’s just an incredible number of missions and quests to tackle. While they’re not all super serious, Larian has reigned in the terrible humor that ruined too many side quests in the first “Original Sin.”

They’ve also improved the combat balance, evening out some of the difficulty spikes that sometimes made the first title an exercise in frustration.

Combat remains a turn-based affair that puts a premium on carefully planning your squad’s movements. Get too close to a lit torch and an enemy can cast a poison spell that explodes on contact with the open flame, putting a swift end to an unwary party. Each action or movement you take will eat up action points, so you’ll need to continuously adjust your position and your attacks.

Most of your party’s attacks will also provide secondary bonuses, like knocking down or inflicting negative effects on enemies. Unfortunately, developers also added a major roadblock to these elements being useful – one that is both bewildering and unwelcome. The vast majority of combatants (your party included) have a magic and physical armor bar that acts as a second health bar. As long as a single point of one of those bars is full, any attacks that provide a bonus will be soaked up.

So, for instance, you have a nice physical attack that deals 20 damage and knocks down an enemy (one of the most useful status effects in the game). However, instead of doing any of the above, it actually just deals damage to the physical armor bar and nothing else.

When dealing with characters who do physical damage, that’s just a small annoyance. Essentially, it’s just a bigger health bar. However, this absolutely ruins characters who rely on magical attacks, as most of their abilities deal much less damage. Sure, they usually provide better status and crowd-control attacks but those don’t take effect until after the magic shield is depleted. And since characters who do physical damage can simply kill their enemies before mages manage to chew through their magic shield, it’s clear the game’s combat system – while great – still needs some tweaking.

But ultimately, I feel as if this is a minor complaint and one that enough people are verbalizing that I believe Larian will take notice. They did a stellar job of listening to fan complaints from the first game, so I have no doubt it’ll be addressed at some point.

Honestly, there is so much packed into this game that I could write about it for much, much longer than anybody would read. I’d love to talk more about how you can do fun things like creating smoke in towns to rob vendors blind, or steal paintings off a wall using magical telekinesis. But there is one more major element of “Original Sin 2” that must be mentioned – the Game Master mode.

Not content with simply bringing back the co-op multiplayer of the first “Original Sin,” Larian has brought to life a full-fledged online roleplaying creative engine, packaged almost incidentally with the rest of the game.

This mode allows for the creation of fully-realized multiplayer roleplaying games using the assets they created from the campaign. Basically, it’s a mode that allows you and up to four other buddies to run an entire “Dungeons & Dragons” type campaign within the game world, using the gameplay elements of “Original Sin 2.”

Entire games have been manufactured for this purpose, most recently “Sword Coast Legends.” Even at this early stage, “Original Sin’s” Game Master mode is on par, feature-wise, with the best of them. It’s dead simple to build a full campaign. Presuming you have friends willing to play along, I can see this mode giving “Original Sin II” legs that outstretch its campaign mode by years.

“Divinity: Original Sin II” dropped during a year where roleplaying games are few and far between. That may have colored my experience with it to some degree, as it was like a glass of ice water to a dehydrated man.

But I strongly feel that not only would this game be looked upon favorably during even the most packed of gaming years, but that “Original Sin 2” will go down in history as one of the best RPGs ever made.

There is so much to do and so much to explore that it’ll take even the most dedicated months to uncover it all. And even then, the Game Master mode is nothing to overlook, as it offers up the potential to keep the game installed on computers for years to come.