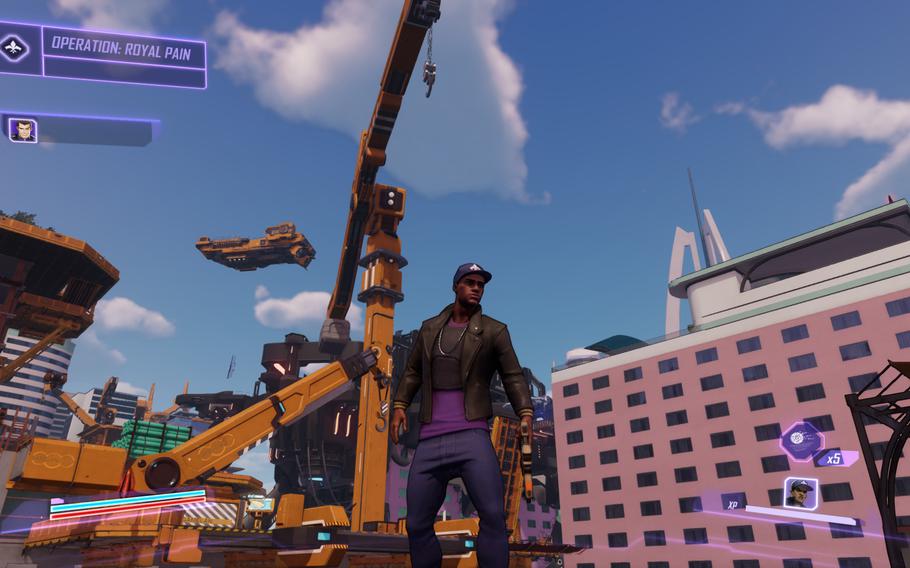 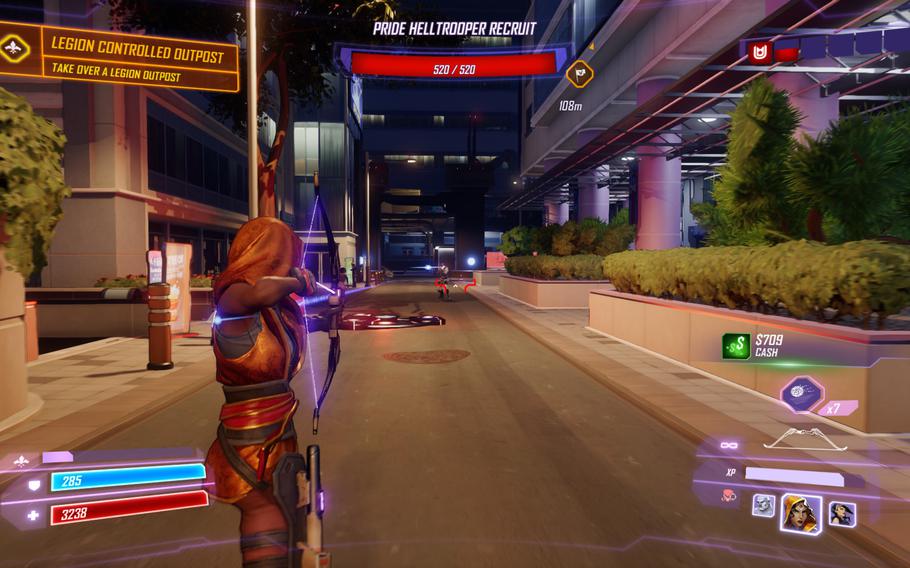 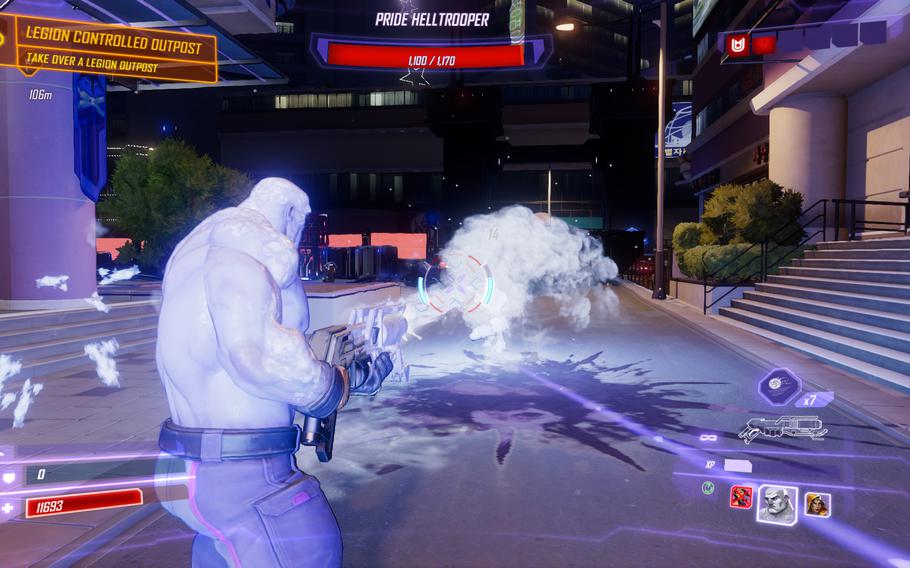 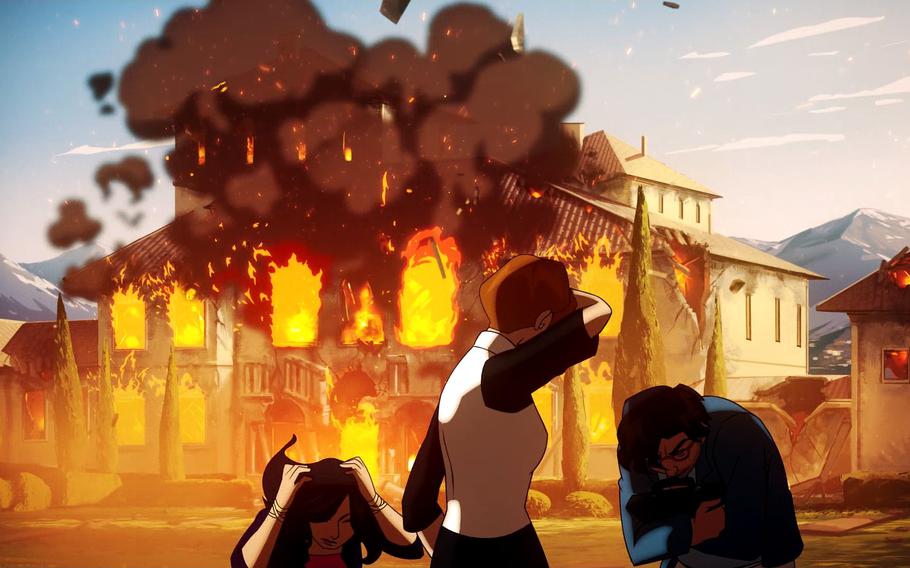 Even the cutscenes in "Agents of Mayhem" feel ripped straight from an early Saturday morning cartoon, circa 1985. (Deep Silver Volition)

Deep Silver Volition, the company behind the recently-released “Agents of Mayhem,” has an interesting track record when it comes to its most famous intellectual property. “Saints Row” began as a “Grand Theft Auto” clone that copied more than it created.

That changed with “Saints Row 2,” which diverged from the standard formula by injected truly over-the-top situations and humor into what was becoming a fairly stale formula at the time. Every iteration of the “Saints Row” series since has diverged even further, to the point where it’s hard to remember the series roots as just another GTA-clone.

With “Mayhem” Volition appears to have wanted to make a clean break altogether, jettisoning nearly every element of the standard formula in favor of something that feels familiar, yet unique at the same time.

Most of the elements of the GTA formula have been removed, or downplayed to the point where it’s a wonder they weren’t cut outright. There are still random delivery missions and collectathons and even some nods to stealing pedestrian vehicles, but they feel more unnecessary than ever before. Good thing, then that the core game is so much fun.

“Mayhem” takes more than a few cues from 80s Saturday morning cartoons, from the cartoonish aesthetic to the crunchy guitar riffs during scene transitions. You’ll take control of a rotation squad of three of the titular agents as you run and gun your way through a neo-futuristic Seoul in an attempt to vanquish the evil L.E.G.I.O.N.

This organization, staffed by henchmen and colorful villains ripped straight out of an Hasbro employee’s memoir, is bent on world domination. The agents of Mayhem are the only thing standing in their way. In another reality, this would be the best G.I. Joe game ever created.

As it stands, the elements “Mayhem” borrows from those older cartoons are the best parts of the game. Collecting the diverse cast of characters, from the John Wick-style Japanese assassin Oni, to the supermodel Italian mechanic Joule, was the biggest highlight for me. Each of the characters is dripping with personality, presented in everything from how they stand to how they jump into a moving vehicle.

Once added to your roster, you’re able to set a squad of three to take into the game’s world. Once there you’re able to switch through the three on the fly. Each are upgradable as well, though this is one element that was a little underwhelming.

Many of the upgrades are of the “give 3 percent more of stat X” variety. In fact, some of the characters have such boring upgrade trees as to make it almost prohibitive to play them. The collectible gadgets offer more gameplay-changing affects, but even those tend to be less useful than your starting gear. As missions are completed, more customization options open up – from character costumes, to weapon skins to unlockable vehicles.

Still, the variety of characters and the amount of detail that went into each was impressive. There are overlaps in the character roles – frontline bruiser, shield destroyers and support focus – but each of the characters feel unique to play with. A lesser game would’ve had just had the crew’s personality restricted to quippy one-liners and cutscenes, in “Mayhem” each character’s personality carries over in to how they fight. Former Marine Braddock lights a signal flare with her cigar to call down orbital laser strikes, while Russian operative freezes enemies before shattering them with a casual backhand.

That being said, the game’s mission structure could have used a little bit more fleshing out. Almost every mission in the game can be boiled down to shooting things until there is nothing left to shoot. The lair infiltration missions in which you have to collect a thing or hack a thing with a simplistic timed-button press mini-game are copy/paste versions of themselves, each with nearly exactly similar set pieces.

If you’re looking to “Mayhem” for anything besides fairly mindless action, you’ll be disappointed. In terms of actual gameplay, that’s all there is. That’s not necessarily a bad thing. When surrounded by a dozen enemies that require switching back-and-forth between crewmembers, lasers flying all over the place, explosions going off left and right – the game really shines.

I’d personally like a little less leeway on the aiming while using a controller – sometimes it feels as if the game’s aiming is a little too generous – but outside of that minor quibble, the gunplay remains fun throughout.

Personally, I had – and am continuing to have – a blast with “Mayhem.” Its throwback aesthetic and Volition’s focus on what it wanted the game to be impressed me greatly. I’ve gotten somewhat tired of games that try to be an action-adventure, role-playing, loot crate-collecting social gaming experience.

“Mayhem” is an unapologetic action game, with some clever writing and an interesting cast of characters. That’s what it is, for better or worse. If this sounds like the type of game you’re interested in, then pick it up. If you want something deeper, then perhaps a game that features prominently a talking car and an immunologist-turned-arrow firing super hero isn’t for you.

Grade: B+Platforms: PC (reviewed), PlayStation 4 and Xbox OneA copy of this game was provided by the publisher for review purposes.