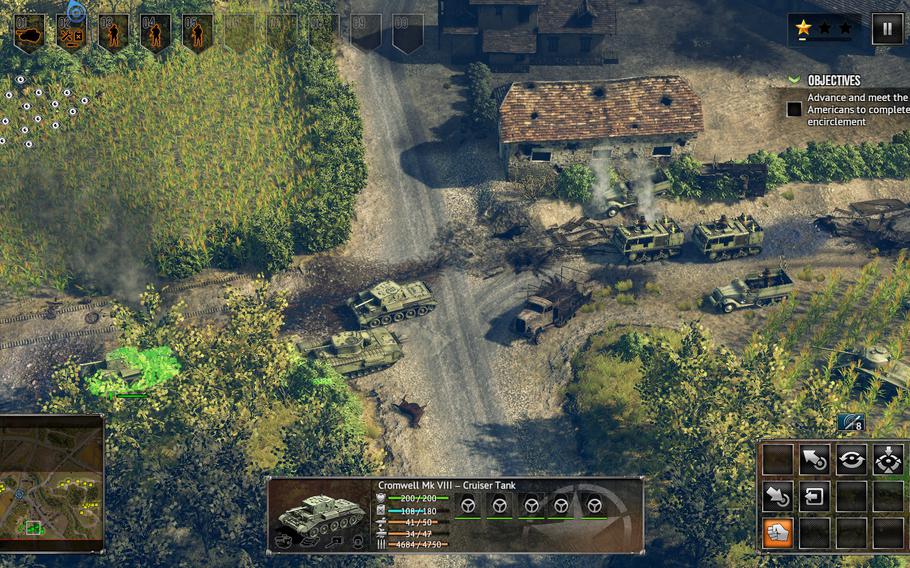 "Sudden Strike 4" is one of the more infuriatingly fun experiences of 2017. One moment, it's extremely enjoyable, the next, an exercise in painful level design. (Kite Games)

"Sudden Strike 4" is one of the more infuriatingly fun experiences of 2017. One moment, it's extremely enjoyable, the next, an exercise in painful level design. (Kite Games) One of best elements of "Sudden Strike 4" is the different campaigns available to tackle from the beginning. (Kite Games)

There are two different games to be found in “Sudden Strike 4.”

They’re not just the multiplayer and single-player modes, though those differing experiences are certainly present.

No, the real divide in this World War II real-time strategy game is between the levels that were balanced for engaging gameplay and those that were clearly devised by someone who hates not only the players, but all things good and happy in the world.

“Sudden Strike 4,” the long-awaited sequel in one of the more historically accurate RTSs on the market, has all the components of a fantastic strategy game.

Each unit – from the far-seeing infantry to the highly-destructive artillerymen – serve a very specific purpose. The maps are enormous and offer various ways to tackle objectives and the missions are equally varied. The single-player missions incorporates many of the campaigns from the European Theater, including battles between Nazi and Soviet forces. KITE Games, developers of “Sudden Strike 4,” even put in some pop-culturally relevant missions featuring Dunkirk.

The controls are standard for an RTS, with no silly changeups to infuriate entrenched fans of the genre. Visually, the game is a treat, with the detailed villages, unit models and effects stamping this as a game that had plenty of care put into it.

All the components for an A+ game are present – save for the one by which all RTSs live or die: balance. The swings in the game’s difficulty are so enormously pronounced that it really does feel like there were two different developers behind the maps – or that some of the maps were thoroughly tested, while others were not.

Allow me to give an example. In one mission, you’ll take a fleet of tanks and other armored vehicles behind enemy lines, then sweep forward to remove heavy weapon emplacements. Each of your units is massively important in this mission, but none more so than the vehicle that carries your squadron’s fuel.

Lose that vehicle and you’ll certainly run out of fuel before clearing the map. It’s an important lesson to learn – and one that is reinforced in other missions. The developers on this map teach the player a lesson and provide all the tools needed to make informed, strategic decisions. There also are multiple ways to tackle the mission, provided you keep in mind the logistical necessities of battle.

Now, contrast that with another mission, this time in the Allied campaign. This mission is a simple “go here, destroy everything, repeat until everything is dead.” However, the map is dense with the fog of war, and artillery fire that quickly decimates your units comes from all corners of the map.

In theory, sending your soldiers scouting ahead to spot enemy artillery can help. As can sending a very limited number of recon planes overhead. In reality, you have to send your ground troops blindly across the map, hoping to not accidently stumble into a superior force. Same with the recon planes.

You’re usually provided with a small number of them per map and they only clear fog of war for a very short amount of time. They’re also highly vulnerable to anti-aircraft guns that are hidden, thanks to the fog of war.

Maps laden with the fog of war are common in RTSs, but normally you’re also given control of resource management. “Sudden Strike 4” provides you a limited number of troops per map and you’re forced to make do with the resources you’re provided. This is a fine system to have in an RTS, but not one with a restrictive and overbearing visibility system. Too often the action boils down to sending recon units around blindly and hoping they’re not destroyed before you can locate the enemy’s artillery. There is no strategy here, just trial and error.

Another major issue plaguing what could have been an excellent game is the poor troop AI. If you assemble your vehicles in a fighting formation and then go to another area of the map, more often than not, the vehicles will be jumbled up, trying to drive through each other. This wouldn’t be so much of an issue if they weren’t wasting the very limited fuel you’re allowed per mission.

In addition, troops will often take enemy fire without returning it, and it’s not uncommon to have one enemy in the prone position be entirely unhittable by tank fire. I don’t care how low to the ground you get, an exploding 75mm shell is going to ruin your day.

And the limited number of troops you’re provided? The enemy often doesn’t have that issue because more of his soldiers will arrive from beyond of the map’s edges, making setting up forward operating bases entirely useless. You’re forced to keep moving, often blindly, or risk being pot shot to death by seemingly infinitely respawning troops.

There are even smaller quibbles that, while not deal-breakers, left me scratching my head. The sound effects are handled well, but the voice acting is very odd. Playing through the American or British segments of the campaign, I expected to hear generals giving their best Gen. George Patton and Bernard Montgomery impressions. However, when similar voices – complete with American and British accents – popped up in the German campaign, it got a little strange.

“Sudden Strike 4” is the very definition of a game that needed more time in the testing lab. There is a great, even amazing, game beneath its flaws. The attention to historic details, the levels full of strategic depth and the simple fact that it has been ages since the last WWII-focused RTS all work in its favor.

But ultimately, the severe balance issues and poor troop management make this a game that is impossible to recommend at this point. I will be keeping an eye on any future updates, however. And if you’re a history buff or RTS fan, I suggest you do the same.

Maybe one day this game will become something special. I hope it does.

Grade: DPlatform: PC (reviewed), PlayStation 4A copy of this game was provided for review purposes.