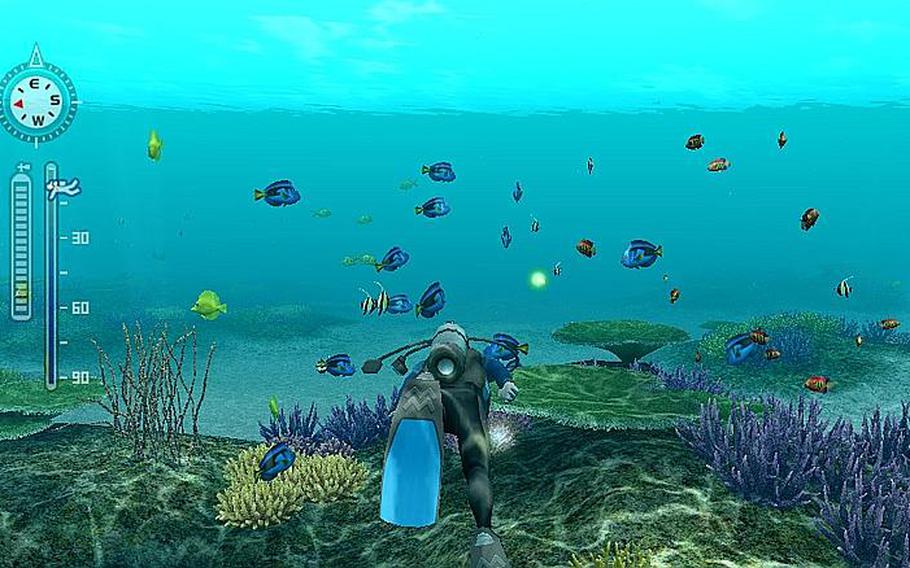 I never played the original “Endless Ocean” for the Wii but was struck by the glowing reviews. “Relaxing,” “tranquil” — critics used a lot of words I typically associate with a massage. As for the plot, there wasn’t one, which is why the game was apparently equal parts ground-breaking and frustrating.

I hit the water swimming with the follow-up, “Endless Ocean: Blue World,” when my character plunged into the deep blue. Naturally, I was waiting for something to happen so I could react. That’s what you do in video games, after all. Well, not in this game. I just stood there suspended underwater — not feeling the least bit compelled to interfere with the passing marine life.

Sure, the game encourages you to swim right along with the fish: get a close look, feed them if you like, or click on one with the Wii remote and find out all about its origins and mating rituals. I did this expecting to get points I thought I would need to advance through the game. Not so. You’re literally just underwater and free to swim around to your heart’s content.

I couldn’t roll with that concept on the first couple of plays. It actually took a family trip to Japan’s equivalent of SeaWorld for me to feel like giving the game another go. This time, I was more objective.

The game’s look is rather stunning, especially where the marine life is concerned. Everything from starfish to whales, turtles, dolphins and manatee are on display here. The closer you get to them, the more details pop out at you. You find yourself not paying attention to your diver at all and just staring at the animals. That’s a pretty impressive feat for any game.

Other times, you’ll be holding out food in your hand for some of the fish to gather around and take a nibble, which makes the Wii remote vibrate subtly, and a big sea ray or other sea creature will swim right into your peripheral vision — paying you little attention but causing the couched version of you to jump. It’s the details like this that really impress. The fish seem like real fish, living in the game. Each one seems to have its own fishy purpose totally independent of you, the gamer.

Sometimes you can hitch a ride on a humpback whale, or even go ashore and check out some of the creatures that come up for air once in a while. It’s all up to you. And you can save your progress whenever you have to go up for air and relax in the boat.

This game does try to have more of a plot than its predecessor. It involves helping a grizzled old diver and his granddaughter seek out a legendary artifact called the Song of Dragons. The storyline might appease gamers that nitpicked the original, but I found the explanation by the talking caricatures at the game’s beginning boring and just skipped through. It’s hardly an essential element to the game anyway.

There are also details like shooting healing power at sick fish using a pulsar tool. Or you can use it as a weapon on poisonous fish and sharks – new additions to the game. These encounters happen pretty infrequently, though, and I found I could pretty easily just swim out of danger. Other options include snapping some photos of fish and requesting guided tours of areas you come across.

Once you get over the fact that there is no timer, no clear-cut objective, and absolutely nothing resembling a floor boss, the second “Endless Ocean” is quite enjoyable.

If given a choice, I would rather visit the local aquarium. But being able to plop down on the couch and swim alongside ocean life whenever you want is a nice option to have.