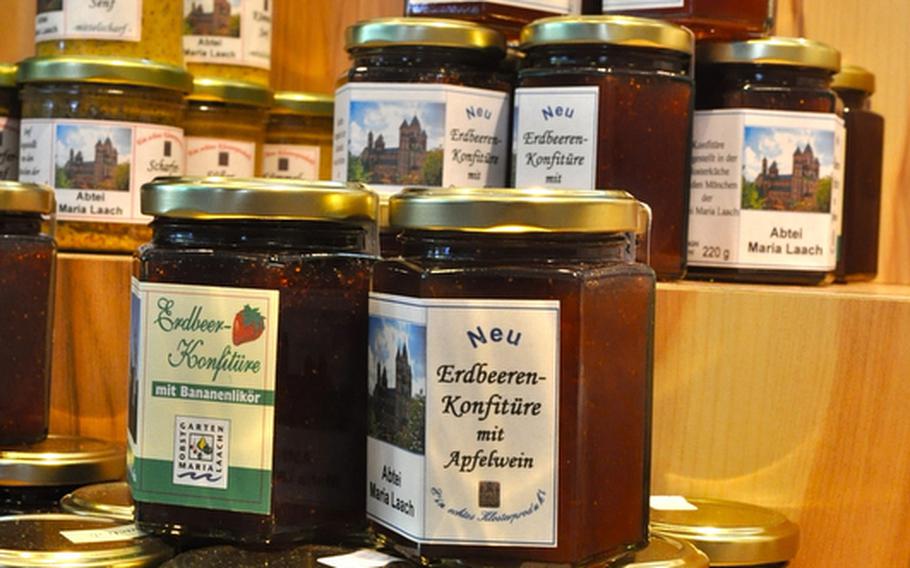 Jars of jam produced from fruit picked at an orchard that is part of the Maria Laach Abbey. A lone monk, Father Jacobus, makes the jams, which come in myriad flavors, including strawberry, raspberry and cherry. He also makes apple butter. (Seth Robbins/ Stars and Stripes)

Jars of jam produced from fruit picked at an orchard that is part of the Maria Laach Abbey. A lone monk, Father Jacobus, makes the jams, which come in myriad flavors, including strawberry, raspberry and cherry. He also makes apple butter. (Seth Robbins/ Stars and Stripes) 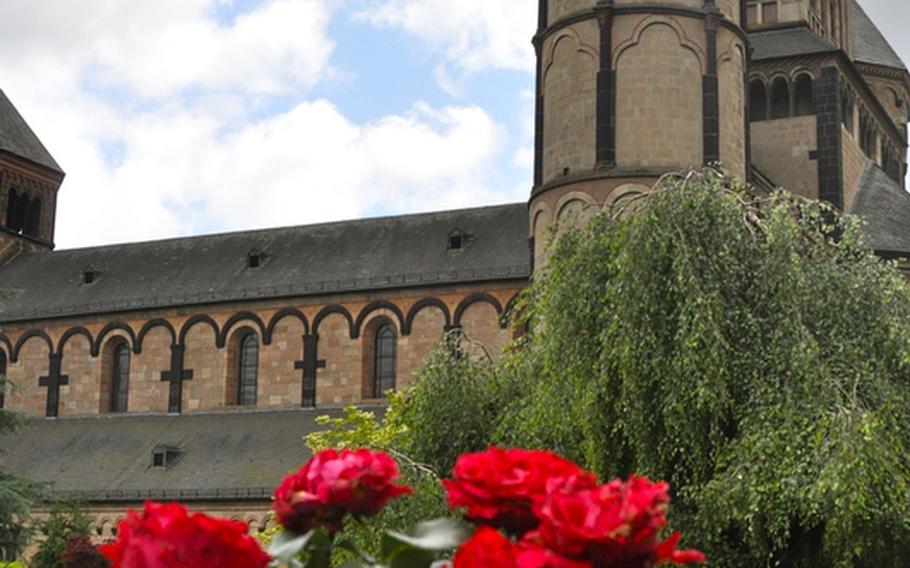 A view of the Romanesque church at the Maria Laach Abbey. Viewing the church, shopping the abbey?s various businesses, and touring the lakeside grounds is an easy way to spend an entire day. Seth Robbins/Stars and Stripes (Seth Robbins/ Stars and Stripes) 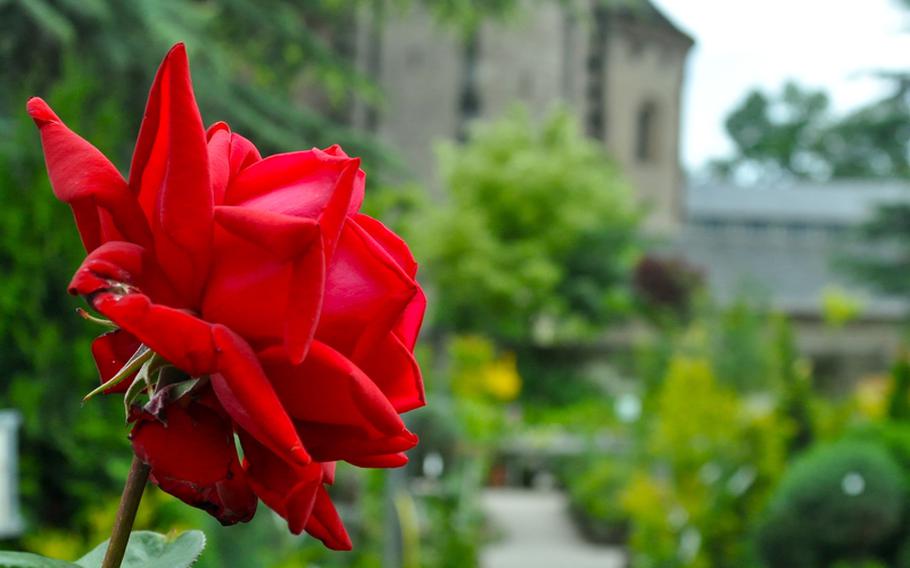 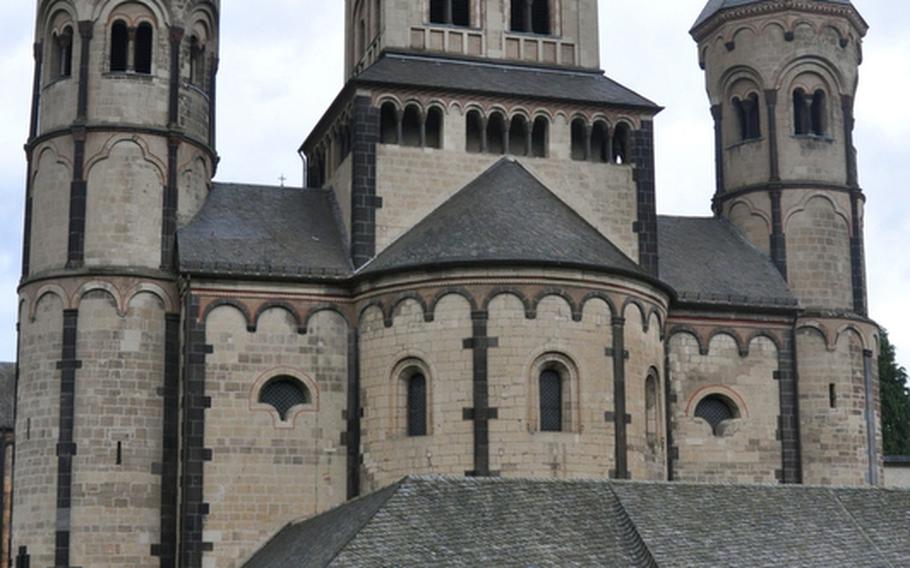 The main entrance to the church at Maria Laach Abbey. The monastery is home to about 50 Benedictine monks, followers of St. Benedict. The monks have lived there since 1093, except for a brief period when Napolean shut down the monastery in the 1800s. (Seth Robbins/ Stars and Stripes) 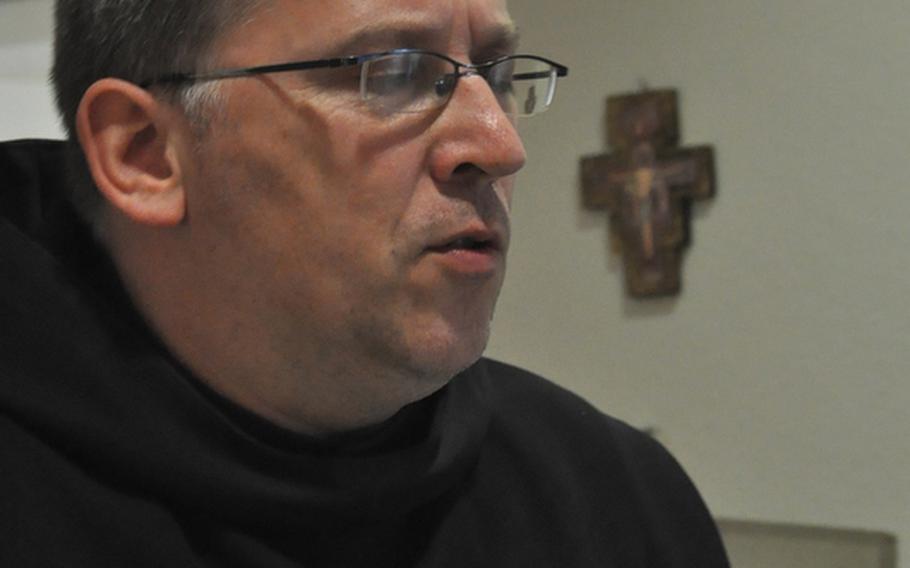 Father Johannes?the friendly, English-speaking host at the Maria Laach Abbey information center ? wears the typical black robes of a Benedictine monk. He is happy to answer questions about the monks? lives and work, but to get a real sense of their spiritual life, ?you have to spend at least two or three days here,? he says. (Seth Robbins/ Stars and Stripes) 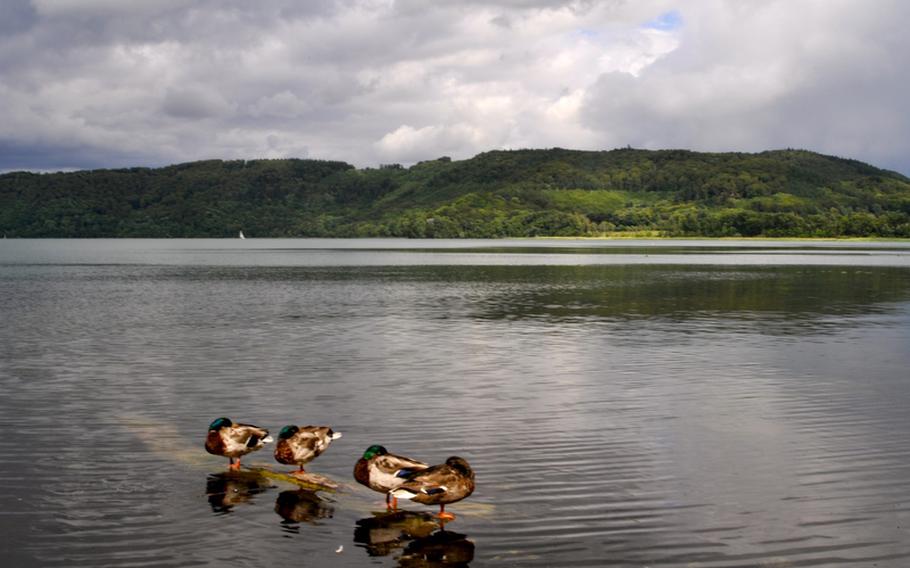 Ducks wade in the lake near the Maria Laach Abbey. The lake is the largest in the Eifel area, part of a landscape formed by settling volcanic ash. A network of lakeside walking paths takes you through volcanic terrain (the area is known for pumice mining), orchards and woods. Boats can be rented at the lake for 5 euros per half hour. Seth Robbins/Stars and Stripes (Seth Robbins/ Stars and Stripes) 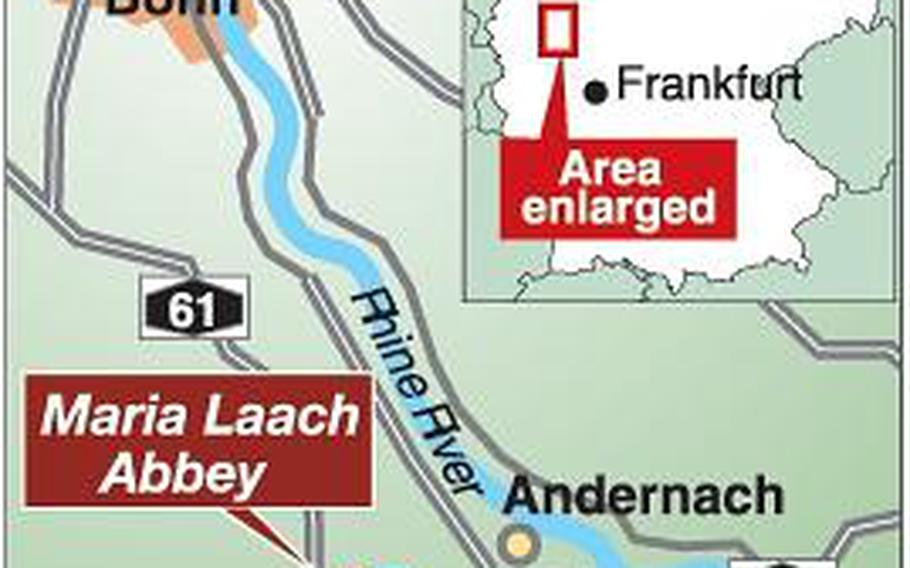 Entrance to Maria Laach Abbey in Germany&rsquo;s Eifel region is free, but once there, it&rsquo;s hard to resist the many tasty offerings for sale, including jams made from fruit picked in the abbey&rsquo;s large orchard.

A favorite purchase among visitors, the jams are produced by a single monk, Father Jacobus. He fills several hundred jars each year in his spare time, but lately he has been having trouble keeping up with the public&rsquo;s appetite, says Father Johannes, the friendly, English-speaking host at the abbey&rsquo;s information center.

&ldquo;He never thought it would be so popular,&rdquo; he said. &ldquo;It&rsquo;s almost too much success for him to bear.&rdquo;

The jams are just one of the many goods produced by the 50 monks, whose lives are governed by 73 rules for communal and spiritual living set out by St. Benedict and used by monasteries for 1,500 years.

The sprawling monastery, located in the hills of the Eifel region, welcomes guests while keeping a strong focus on religion. A 20-minute video in the main information center, across from the Romanesque church entrance, gives a good sense of the monks&rsquo; work and daily life, and puts their business activities in perspective.

Under the dictate of &ldquo;pray and work&rdquo; (or, in Latin, ora et labora), the monks are encouraged to constantly labor at one or the other. By St. Benedict&rsquo;s rules, monastic communities must strive to be self-sufficient. Hence, the many goods sold onsite.

Besides an organic food store, there is a junglelike garden shop that is the abbey&rsquo;s most profitable business. It sells everything from exotic cacti and orchids to rose bushes, which come in pink, yellow, red and white.

The abbey also has a foundry where giant bells are made and then sold to churches and other institutions worldwide. The monks themselves cast the bells, which can weigh up to 5 tons.

&ldquo;As far as we know,&rdquo; said Father Johannes, &ldquo;we are the only bell factory that is still run by monks.&rdquo;

Though the foundry is not open to the public, the metalwork made there, such as a series of bronze, matchbox-size figurines depicting angels and other Christian icons, are sold at a nearby art shop. The shop also sells religious books, earthenware and items produced at other monasteries, including soaps and beeswax candles.

To see the other half of monastic life, head to the Romanesque church, which looms over the abbey&rsquo;s landscape.

The monastery was founded in 1093 by Count Palatine Henry II, who was childless and wished to secure his good graces with God. His remains are still in the main church, encased in an elaborate, colorfully painted sarcophagus that depicts him holding the finished monastery in his hand.

Except for the sarcophagus, the church&rsquo;s main hall appears surprisingly bare. Its furnishings were sold off in the Napoleonic era when, in 1802, Napoleon dissolved the abbey and banished its monks. Ninety years later the Benedictine monks returned to Maria Laach and have stayed ever since.

The church, however, boasts some surprises: a side chapel whose Piet&agrave; figure (Mary holding the crucified Christ) is surrounded by so many candles that the small room seems to glow. Nearby lies a stack of small sheets of paper on which visitors may write any serious need they would like the monks to pray for. The requests are left in a drop box and later collected by the monks.

Those who want to immerse themselves further in the spiritual lives of the monks can stay at the abbey in its guest wing and &ldquo;enjoy the silence,&rdquo; says Father Johannes. While the wing is currently under renovation, it will be ready for guests again by the end of the year.

But here&rsquo;s a warning for those considering a quiet stay at the abbey: Monastic life is imposing. The monks have little or no personal property, they live under an established schedule for prayer and Mass, and they are encouraged to spend free hours reading and meditating. The monks do not converse during meals, but rather listen to readings from Scripture and other books. The rules on silence apply to their guests, too, even during mealtimes.

To really partake in the monks&rsquo; spiritual life, says Father Johannes, &ldquo;you have to spend at least two or three silent days here. Then you get an idea.&rdquo;

Or just enjoy an afternoon at the monastery, exploring the church, the abbey&rsquo;s shops and the nearby lake.

On the QTDirectionsThe abbey is a 45-minute drive from Spangdahlem Air Base. Take the A-60 to Wittlich and then switch to the A-1 heading toward Koblenz. Shortly before Koblenz, take the off-ramp toward Mendig and follow the signs to Maria Laach.

TimesThe monastery is open to visitors weekdays and Sundays from 1:15-4:45 p.m. The stores, such as the organic food market and garden shop, close at 6 p.m.

CostsThere is no charge to enter the monastery, but nearby parking costs 1. 50 euros (about $2.20).

FoodThere are two restaurants near the abbey compound: a cafeteria and a formal restaurant.

The cafeteria sells a buffet-style meal of rustic German fare for about 7 euros. The formal restaurant, which is part of the Seehotel, serves freshly prepared fish and other dishes that include seasonal foods. Entrees cost about 20 euros.

Near the parking lot, there is an organic food shop specializing in organic meats, fruits, jams and other products from the abbey. There is a wurst stand there that sells organic sausages and fries for about 3 to 5 euros.

InformationThe abbey&rsquo;s website is www.maria-laach.de, in German. The monk at the information office speaks English and can answer questions about what to do and see.