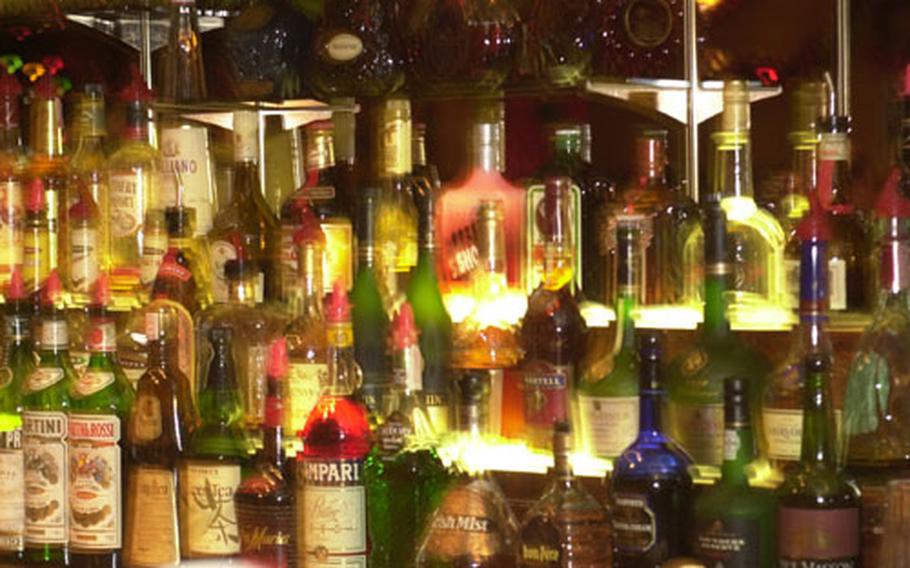 Row upon row of bottles of hard liquor sit behind the bar at the Embarcadero Lounge at the New Sanno Hotel in downtown Tokyo, await customers&#39; requests. (Rick Chernitzer / S&S)

SEOUL &#8212; A one-year unaccompanied assignment in a hardship area with family and friends thousands of miles away. A strange new culture and the inability to communicate outside the gates: South Korea may seem like the perfect place for drinking problems.

Yet officials across the peninsula say alcohol-related incidents are either dropping or stable. This, they say, is good news when some other U.S. bases across the Pacific have seen a recent spike in incidents.

Ivey said he doesn&#8217;t think there is a big problem here with alcohol but he said he thinks the potential exists.

&#8220;The soldiers stationed across the peninsula are hard working and dedicated individuals that deserve the best we can provide,&#8221; according to a statement by 8th Army public affairs officers.

Jerome J. Konieczny, Korea Region Office&#8217;s MWR director, said his organization is very sensitive to alcohol-related problems here. He said they strive to keep soldiers on base and in local facilities.

To continue offering the best service, MWR is shelling out more than $100 million through fiscal 2005 to improve and build facilities, including fitness centers, clubs, community activity centers and sports fields.

Joe L. Kearns, an addiction counselor at Yongsan&#8217;s Community Counseling Center, said he began giving classes to all incoming soldiers about nine or 10 months ago. He stresses that any alcohol-related incident will earn a soldier a trip to his office and an evaluation.

Kearns, a retired soldier, also tells the troops about the alternatives to drinking, including educational opportunities, tours and volunteer programs.

He said a soldier&#8217;s first and last 60 days in Korea are when he or she is most likely to have an incident.

He said all soldiers also get four hours of alcohol training each year: one hour a quarter.

And Air Force leaders at Osan and Kunsan air bases said hard work, a serious war-time mission and plenty of off-duty activities are key to keeping their airmen out of trouble.

Osan officials track the incidents through the number of airmen referred to the Alcohol and Drug Abuse Prevention and Treatment program run by the medical group. Usually, local commanders refer airmen to the program after an incident. Counselors there will determine if the person may have an alcohol problem.

Kopp said 95 percent of his servicemembers are on unaccompanied tours, meaning many leave families behind.

He said he thinks the command has a very active and effective services and family support programs. He also stressed the family support center is for all base residents &#8212; not just those on accompanied tours.

He said that while Korea is considered a hardship tour, he doesn&#8217;t think the drinking problem per capita is any worse than at bases in the States.

He said it&#8217;s not easy to compare his 18- to 22-year-airmen with their college peers in the States when it comes to alcohol-related problems.

And Osan has a popular and wild party area outside its front gates.

Kopp said Osan sends town patrols into the bar area to ensure force protection measures are being enforced and to keep an eye on the airmen.

If they see an obviously inebriated airman, they&#8217;ll suggest the airmen&#8217;s friends take him or her home.

At Kunsan, Col. Stuart Johnson, vice commander of the 8th Fighter Wing, said the key is to keep airmen &#8220;busy and give them alternatives.&#8221;

Base public affairs officials provided stats for Kunsan&#8217;s 2002 alcohol-related incidents. They were:

From 1,500 to 2,000 airmen use the center monthly. It features a big screen TV, movies, computers with e-mail, a private morale call room, books, board games and refreshments.

And Robinson said all arriving airmen hear about alcohol-related problems from Col. Guy Dahlbeck, 8th Fighter Wing commander, within an hour of arriving at the base.

Dahlbeck greets all incoming flights and tells the airmen that they can make a difference during a one-year tour, said Johnson.