Donald R. "Ryan" McGlothlin 'What would Ryan want for you right now?' 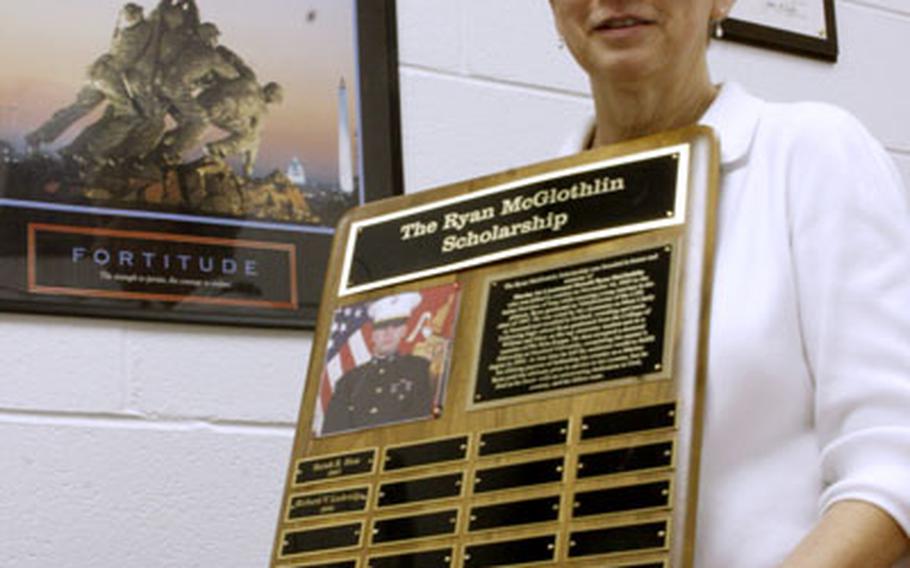 Ruth McGlothlin in her office at Lebanon High School, with the plaque listing the recipients of the scholarship honoring her son, 1st Lt. Ryan McGlothlin. (Joe Gromelski / Stripes)

Ruth McGlothlin in her office at Lebanon High School, with the plaque listing the recipients of the scholarship honoring her son, 1st Lt. Ryan McGlothlin. (Joe Gromelski / Stripes) 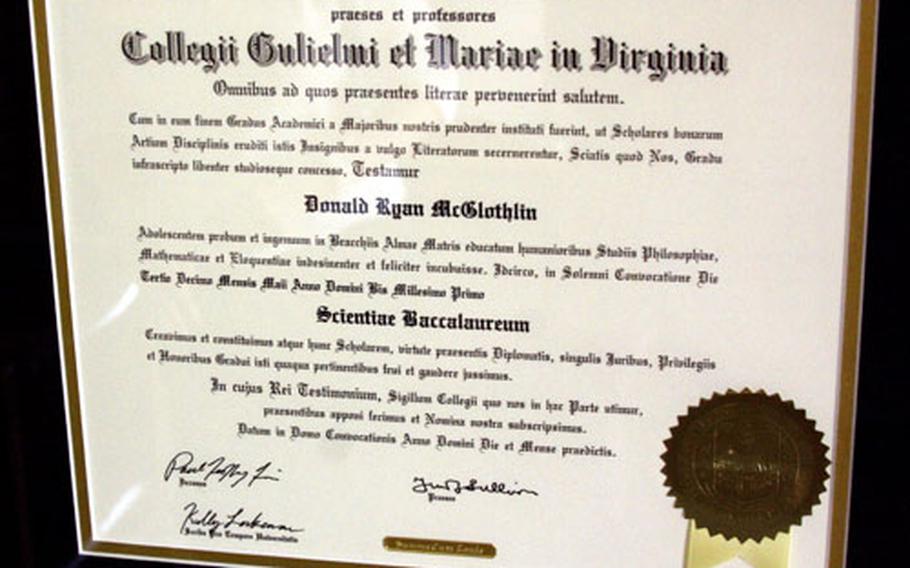 Ryan McGlothlin was the top chemistry student at the College of William and Mary, and went on to study at Stanford, but his mother always believed he would enter the service. (Joe Gromelski / Stripes) Young Ryan McGlothlin at the beach with his older brothers, Nathan and Sean. His mother, Ruth, says Ryan was interested in the military "from the time he could pick up an encyclopedia and look things up. He&#39;d look up uniforms, weaponry, airships, naval vessels — it was just a fascination of his." (Photo courtesy of Ruth McGlothlin)

LEBANON, Va. &#8212; Ryan McGlothlin was leaving for California to begin graduate studies in chemistry at Stanford, but his mother still believed that the military was his future ... as she had since he was three years old.

"I remember it so clearly," said Ruth McGlothlin, a guidance counselor at Lebanon High School. "As he pulled out of the driveway I thought, &#39;please, I hope you love what you find there,&#39; because I knew he had this military thing in the back of his head. But I knew within a month he didn&#39;t love it. He loved the people, the area, the school, but he didn&#39;t love sitting in the lab eight hours a day, and I thought, &#39;he&#39;s going to be a Marine when he can be a Marine.&#39; "

After the September 11, 2001 attacks, he left Stanford and signed up. And even though she believes "he had to be who he was," the first few days after 1st Lt. Ryan McGlothlin&#39;s death in a grenade attack in Iraq in November, 2005, were as difficult as one would imagine for his mother.

The turning point in her grief was a simple question.

"Reporters were at our house a lot right after this happened. One of them asked me off camera, &#39;what would Ryan want for you right now?&#39;

"Up to that point, this was maybe a week and a half after he had been killed, my wish every night when I went to bed was that I just wouldn&#39;t wake up, because it was so excruciatingly painful. You&#39;d sort of escape that in sleep. Then you&#39;d wake up and the reality would hit you again.

"When (the reporter) asked me that question, it sort of turned a corner for me, because I could just hear Ryan say to me, &#39;Mom, this was a choice I made.&#39; And he wouldn&#39;t want me living in anger or sadness, or certainly wishing I would die because he died.

"And so I have to live in a way that honors his life and his willingness to sacrifice his life. That&#39;s what keeps me going."

Ryan McGlothlin&#39;s path to the military wasn&#39;t an easy one, thanks to a wheezing condition he suffered when he was only a year old. After the Gulf War, when many troops developed respiratory problems, the policy was changed so that illnesses before age 12 were no longer overlooked.

"It took three years of paperwork, (physical training), seeing doctors to get a waiver," she said. "That&#39;s how badly he wanted it.

"When he became a Marine, that was it, that was what he wanted to do. As much as I hate what happened, I think he&#39;d make the same choice over again."