District of destruction: ‘Division’ developers bring Washington to life, then bring it to its knees 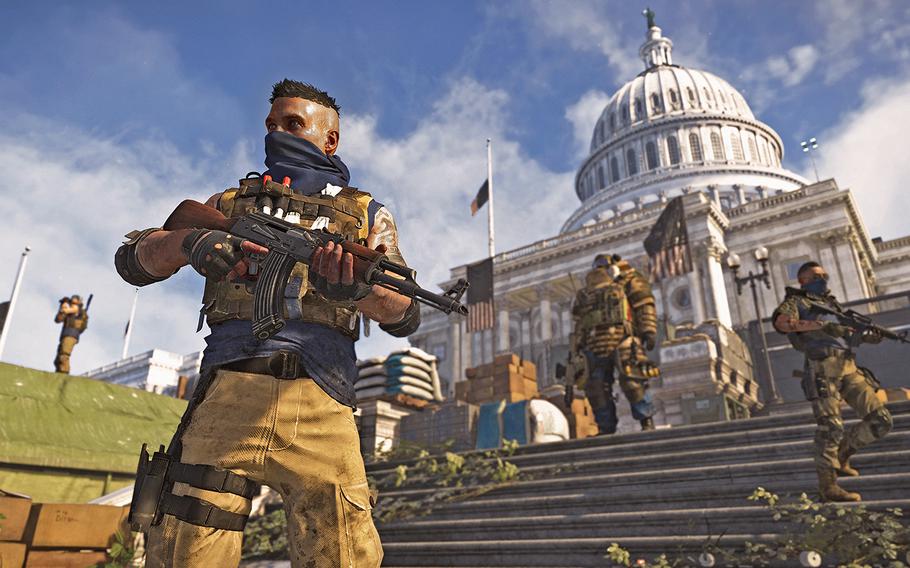 The True Sons have taken over the Lincoln Memorial in "Division 2," which plays through a series of post-apocalyptic nightmares in Washington, D.C. (Ubisoft)

The True Sons have taken over the Lincoln Memorial in "Division 2," which plays through a series of post-apocalyptic nightmares in Washington, D.C. (Ubisoft) 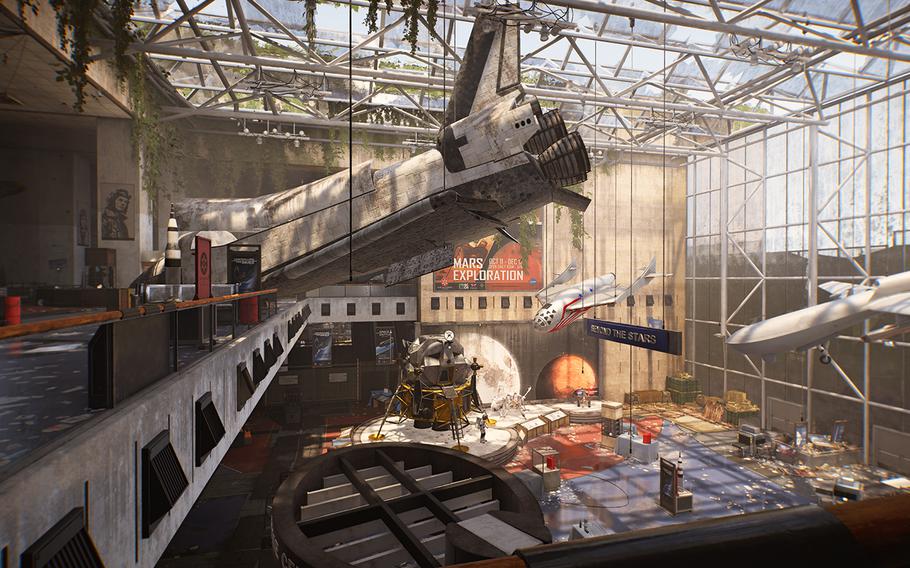 The Air and Space Museum in Washington, D.C., hosts a wide variety of fighting areas in "Division 2." (Ubisoft) 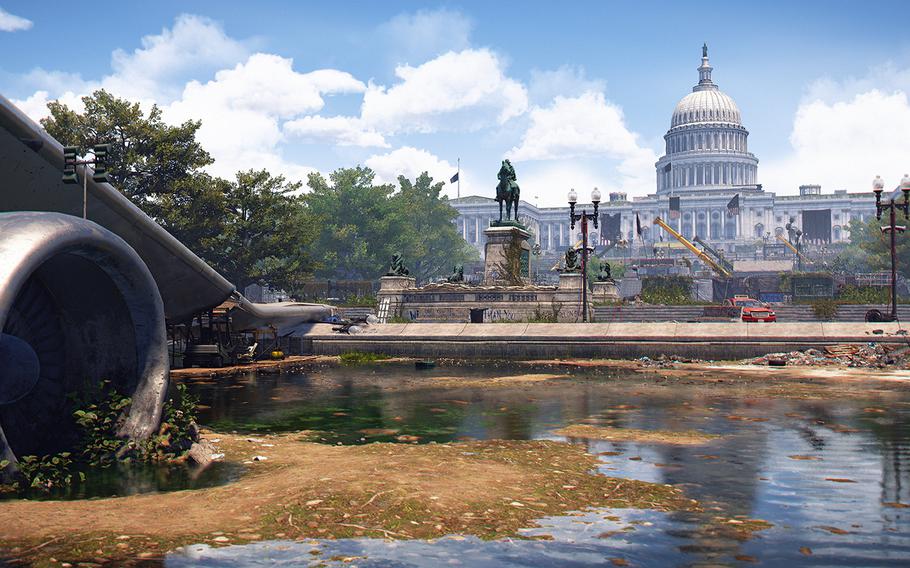 The Capitol building in Washington, D.C. has become a base for ruthless thugs in the post-apocalyptic world of "Division 2." (Ubisoft) 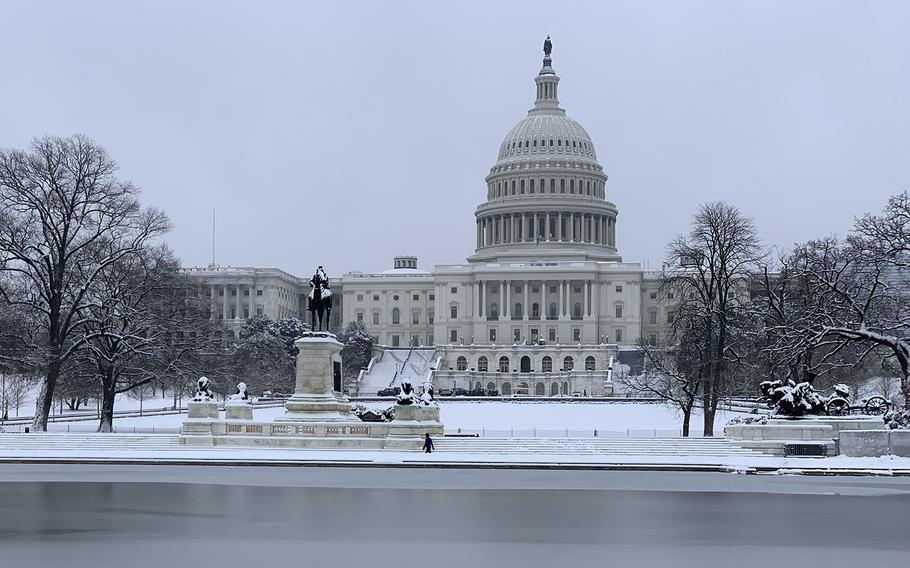 A view of the Capitol Building in Washington, D.C. (Michael S. Darnell/Stars and Stripes)

When Stripes moved to its new offices a few months ago, I didn’t realize my desk was a great sniper position that could provide overwatch for teammates operating in the dark zone north of Capitol Hill.

Or at least it could in the post-apocalyptic world of Ubisoft’s “The Division 2,” which releases March 15.

The third-person shooter is set in Washington, D.C., seven months after the introduction of a deadly virus that quickly swept through cities and left death and chaos in its wake. It’s the sequel to a 2016 game set in New York City during the initial stages of the biological attack.

The concept driving the game’s worldview is a cascading series of disasters, according to developers who came to the nation’s capital in late February to show off their work.

In the game, the introduction of the virus was bad enough, but things got worse once panic set in. Suddenly, people would do anything to survive. Even that kindly neighbor was willing to kill to ensure the safety of his family.

As services collapsed, authority started breaking down and thuggish factions rose among the survivors. Then a storm blew in and flooded much of the area around the Washington Monument.

But before incorporating all of this into their game, developers had to re-create a disaster-free D.C.

Their goal was to build a one-to-one reproduction of the city, El Zibaoui said.

In the past, game developers were satisfied with a condensed version for their re-creations. The Empire State Building, Rockefeller Center or Chinatown might look like the real things but they’re smaller and closer together. But “Division” developers wanted a full-scale replica.

One of their first steps was to consult digital maps to get size and placement just right.

“Once you have the geometry, that’s when the real fun begins for the team,” El Zibaoui said.

Creative designer Julian Gerighty said teams took to the streets of D.C. to scout interesting areas and interview residents so they could get the city’s look and vibe right. It was important to “send people to these locations to see what makes them tick,” Gerighty said.

“One of the main characters of the game is Washington, D.C., itself,” Gerighty said.

The efforts paid off in a visually striking and very faithful rendering of the city.

I was thrilled to guide my agent down streets that I’ve walked for years. I saw the taco place with the art deco facade, the expensive pen store with the arches, the blocky department store and my favorite burger joint. I felt at home. Everything was in the right spot, the right shape and the right color.

Cloe Hammoud, intellectual property researcher for Massive Entertainment, said it was vital to get things right — from buildings to signage to police cars. She wanted gamers to say, “OK, this is D.C. It’s not New York anymore,” which is where the first “Division” was set.

However, the digital city isn’t a perfect clone of the real thing.

The names of stores, restaurants, hotels and even some governmental facilities were changed to guard against legal trouble, Hammoud said. This explains why District Taco became an Asian restaurant and Ollie’s Trolley became a more generic eatery.

In addition, sensitivity to important cultural icons guided the presentation of certain memorials. The World War II Memorial has been transformed into a monument of similar size and scope that’s dedicated to another cause. And the Vietnam Memorial is inaccessible altogether.

“We are 70 nationalities working on the game, but we always show respect,” Hammoud said.

After re-creating the city, developers had to determine the best way to destroy it. So, they turned to first responders and other experts to get an idea of how a cascade of disasters might affect Washington. It involved much more than filling the streets with wrecked cars, bags of trash and other detritus.

The experts had advice on evacuation routes, emergency procedure and contingency plans. They could also explain how the city was affected by extenuating circumstances in the past. For example, much of the sprawling National Mall was given over to troop accommodations and material stories during the Civil War and World War II. And as recently as 2006, prolonged rainfall flooded the area around the Washington Monument and filled the basements of many federal buildings, including the National Archives.

These elements can be found in the game. The area around the Lincoln Memorial was used as a staging ground. Easily isolated Roosevelt Island was used to quarantine the sickest. And the Mall was used to house refugees — and as a mass grave for those who didn’t survive.

Developers also had to determine the impact of failed emergency systems and procedures. When will supplies be exhausted? What happens if the team responsible for installing the flood barriers dies of the plague? These are the circumstances that turn a disaster into a catastrophe — and propel the game’s action.

“ ‘The Division’ is really about the fragility of these systems,” Hammoud said.

When looking beyond the official response, the team tried to determine how the citizens would respond and incorporated that into the game. The residents of wealthy Georgetown immediately fled, leaving most of their possessions behind. The commercial districts were heavily looted in the early days. Many of the thick-walled governmental buildings, such as the Capitol, were acquired by ruthless thugs for use as bases — setting the stage for the game’s major conflicts.

Additionally, three areas of the city have become “dark zones” — highly contaminated but filled with loot and deadly foes. These are the player-vs.-player arenas where everyone who moves is fair game. Nestled just inside one of these zones is the new home of Stars and Stripes.

All that’s left of civilization is a few scattered settlements eking out a meager existence amid the destruction. It’s your job to rein in the chaos and rebuild civilization. As you lift up these settlements, they grow and are better able to provide the support you need to keep your mission moving forward.

“It’s not just about survival,” Gerighty said. “It’s about building a better tomorrow.”

When starting the game, you immediately learn that the White House has fared pretty well. It is your unit’s headquarters, so it has been well guarded and maintained — though it’s under assault when you first arrive on the scene. As you help civilians revitalize areas of the city, you will gain assets that make your base more robust and helpful.

Farther down the National Mall, the Air and Space Museum has been appropriated by a militaristic faction known as the True Sons. They have fortified the museum and are using it as an arms factory. It’s your mission to destroy the enemy and anything they’re using to manufacture weapons.

El Zibaoui said the museum was selected as the site of a major battle because of its size and configuration. It’s essentially a very long line of galleries made of stone and glass, housing aircraft and spacecraft. In the game, this translates into a wide variety of fighting areas.

Initially, the Lincoln Memorial was used as a base of operations for the Joint Task Force keeping order in the city. However, as supplies and support dried up, the base was abandoned. The memorial was then taken over by the True Sons.

In creating the mission involving this site, developers took advantage of a little-known aspect of the memorial. Chad Chatterton, lead environment artist at Massive Entertainment, said the monument’s builders needed to dig deep to reach bedrock so the immense stone structure wouldn’t sink into the marshy soil. The excavation left a cavernous undercroft, and developers used it to create a unique battle space.

Sometimes developers took a step beyond what they found to create something new and intriguing.

Just off the giant crossroads known as Dupont Circle is a tunnel that was built for the city’s ill-fated streetcar system. The tunnel was used for mass transit for only 15 years before being closed in 1962. It lay abandoned until the 1990s, when a portion served as an underground shopping area for about a year before closing again. A few years ago, a stretch received a third lease on life when it opened as an underground art and concert venue.

When developers visited, they found the gallery and remains of the 20-year-old shops and realized the space was ideal for “The Division.” However, it needed some tweaks. First, it was beyond the edges of the game’s map, so developers moved it to a different location. Then, they decided to play on the city’s heritage of secret operations and locations and created a Cold War bunker. Now, it’s the perfect place for gamers to explore, collect loot and tackle a unique set of enemies.

The only landmark in which I had the opportunity to fight in the game and then tour in real life was the National Archives. This experience was enough to confirm the developers’ ability to integrate lifelike settings and compelling gameplay.

In this mission, you are asked to recover the Declaration of Independence.

While playing the game, I thought the mission was exciting, the battle spaces well designed and the challenges fun. When we toured the building the next day, I could see how developers took advantage of the building’s actual architecture to create and guide the encounter. In the rotunda, I could even see where the boss perched while he rained death down on my team. And I saw the real-life counterpart of the door that allowed a shotgun-wielding goon to shoot me in the back.

The development team hopes that all of these landmarks — some among the most recognizable on Earth — will help make the game compelling and the action feel urgent.