Did Jesus Walk in Japan? 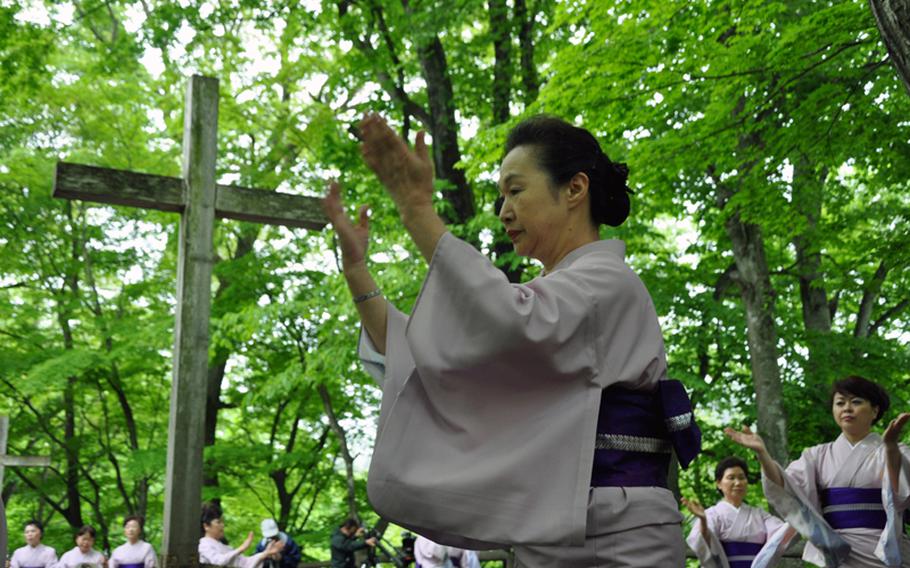 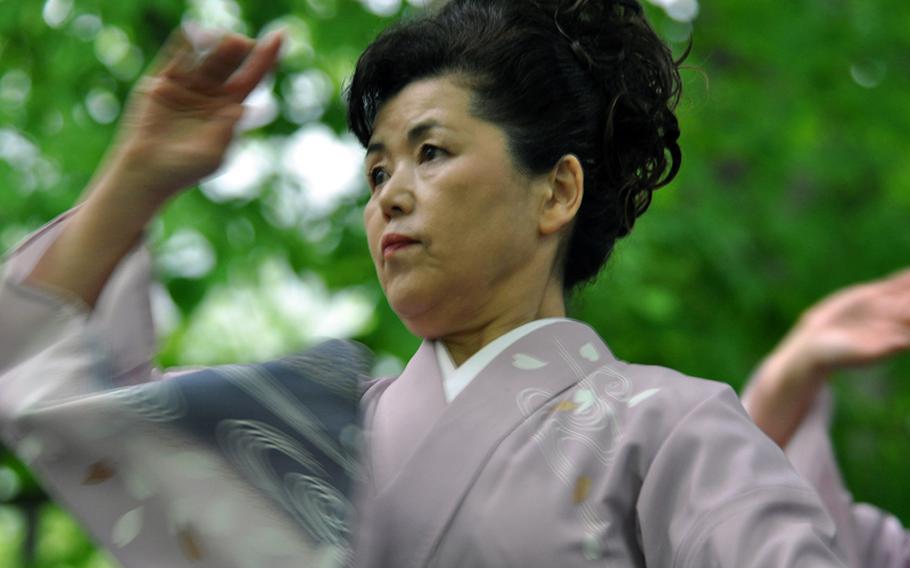 Buy Photo
A woman from Shingo, Japan, dances around what local villagers call the Tomb of Christ, during a festival in late May. (T.D. Flack/Stars and Stripes) 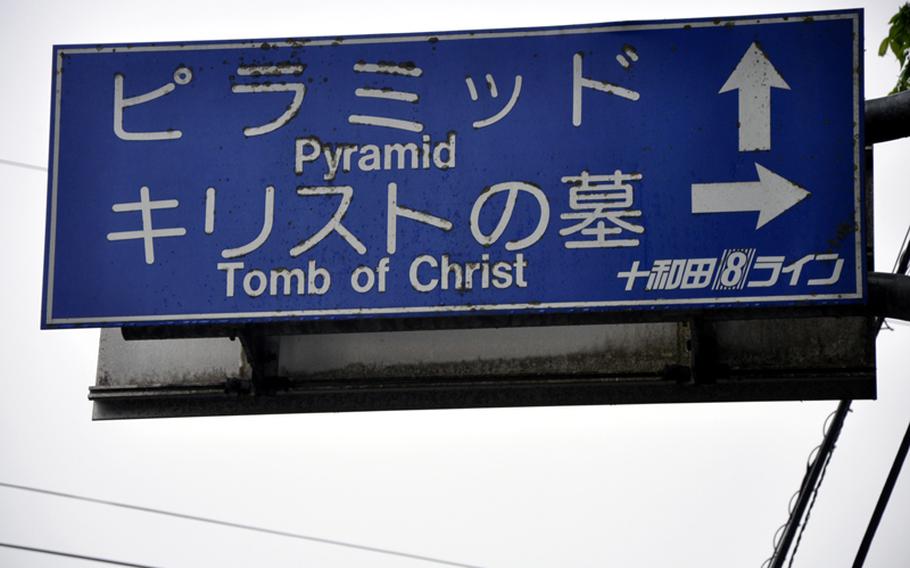 Buy Photo
The people of Shingo, Japan, about an hour?s drive from Misawa Air Base, say that Jesus Christ is buried there. About 15,000 people visit the village each year. (T.D. Flack/Stars and Stripes) 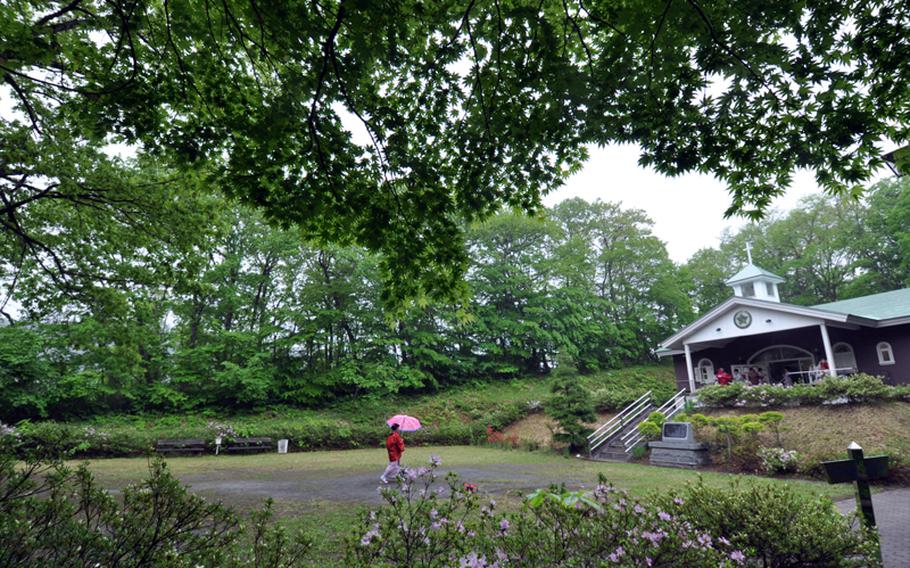 Buy Photo
A small chapel sits on top of a mountain in Shingo, Japan, where local villagers say that Jesus Christ is buried. (T.D. Flack/Stars and Stripes) 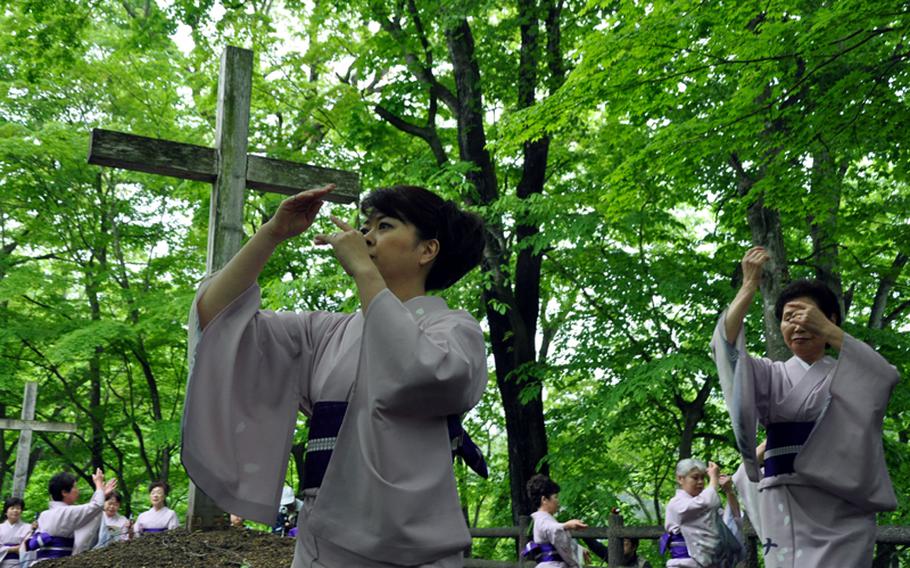 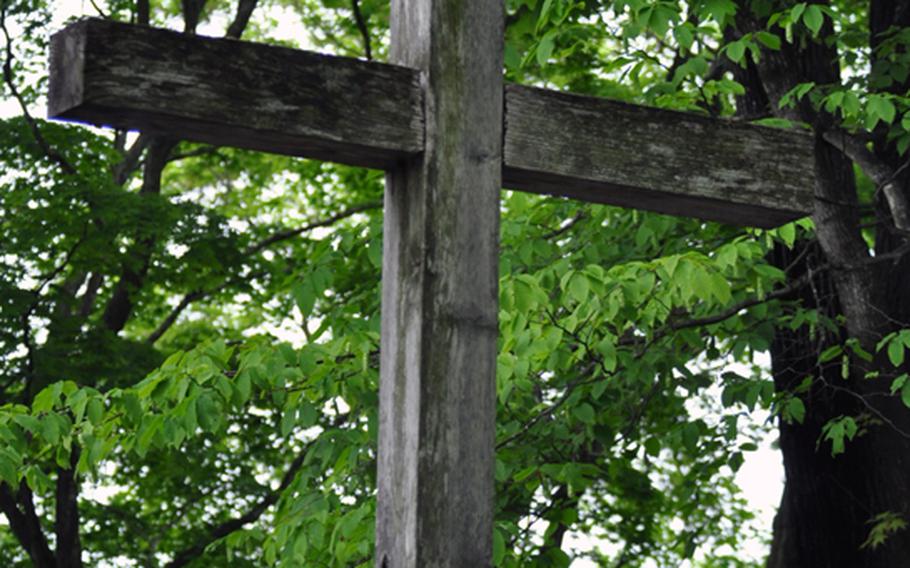 Buy Photo
The people of Shingo, Japan, about an hour's drive from Misawa Air Base, believe that Jesus Christ is buried under this cross on a small mountain in the village. (T.D. Flack/Stars and Stripes)

I found Jesus. In Japan, of all places.

No, it wasn&rsquo;t some sort of spiritual awakening. I mean I actually found the bright blue tourism sign &mdash; par for the course at any Japanese sightseeing spot &mdash; that let me know I had stumbled upon the &ldquo;Tomb of Christ.&rdquo;

I had heard about this a few years ago, but finally decided to visit the village where some people believe that Jesus Christ was buried in Shingo, in northeastern Japan, about an hour from Misawa Air Base. They believe Christ escaped his intended crucifixion and fled by boat to this island nation.

According to the story, he apparently lived to the ripe old age of 106 in Japan, where he was buried in what is now modern-day Shingo. He changed his name to Daitenku Taro Jurai, married a Japanese woman, Miyuki, and had three daughters, according to an English-language pamphlet offered in a small chapel on a forested hill in the village.

The proof? Well, that&rsquo;s where it gets a bit sketchy. According to the pamphlet, his last will &mdash; detailing his life in Japan &mdash; was discovered in the area in 1936. And then &mdash; wait for it &mdash; it was lost.

Local residents, however, cite traditions handed down over the generations as proof. The practice of drawing a cross on a baby&rsquo;s forehead before taking it out of the house for the first time is one example. Also, the alleged tomb of Christ sits on land belonging to the Sawaguchi family, and the family crest is similar to the Star of David, they point out.

And, most colorfully, there&rsquo;s the village&rsquo;s traditional song and dance, displayed during festivals each June and August. Village men bang a steady rhythm on drums while the women, clad in bright kimonos, dance and sing a song comprised of something other than Japanese words.

During the June festival, crowds of people climbed the small mountain to stand in a misting rain to listen to the chants &mdash; &ldquo;Nanyadoyara, Nanyadonasareno, Nanyadoyara.&rdquo;

According to the pamphlet, Eiji Kawamorita, a doctor of divinity who now resides in the United States, translated the song as, &ldquo;We praise your name, You drove away the outsiders, We praise your name.&rdquo;

Aiko Sakurai, with Shingo&rsquo;s business and tourist office, said that about 15,000 people flock to the small village and tomb each year.

Sakurai admits there has been criticism of the claim, with some calling it sacrilegious.

The answer to those who question the veracity of the claim: It can&rsquo;t be proven, &ldquo;but it&rsquo;s said to be so,&rdquo; Sakurai said.

&ldquo;We were told about the tomb being Jesus Christ&rsquo;s since we were children, so we all believe the story,&rdquo; even if we&rsquo;re not absolutely certain it&rsquo;s Christ&rsquo;s tomb, he said.

&ldquo;Whether it&rsquo;s true or not, I think it gives people a sense of romantic adventure, and I think people need it in this busy world,&rdquo; Sakurai said.

Brendan Agnew, head of religious studies at the Saint Maur International School in Yokohama, said that while the legend of Christ being buried in Shingo is interesting, the fact that it&rsquo;s based on lost documents makes it sound more like the material for a Dan Brown novel.

&ldquo;Compared with the amount of historical and archaeological evidence for the death and burial of Christ in Jerusalem &mdash; I am afraid the weight of evidence comes down on the side of orthodoxy,&rdquo; Agnew said in an email response to Stripes.

He said the story is probably the product of Japan&rsquo;s suppression of outside religions during the Edo period, when many Christians and Catholics went into hiding.

&ldquo;Without any guiding authorities or educated priests, many &lsquo;strange&rsquo; forms and traditions developed,&rdquo; he said. &ldquo;As stories developed and were added to an oral tradition, they become part of popular myth and belief.&rdquo;

Agnew said that&rsquo;s likely the origin of the &ldquo;tomb myth&rdquo; at Shingo.

&ldquo;Perhaps a church or shrine to the tomb of Christ existed there and some came to regard it as the real burial place,&rdquo; Agnew said.