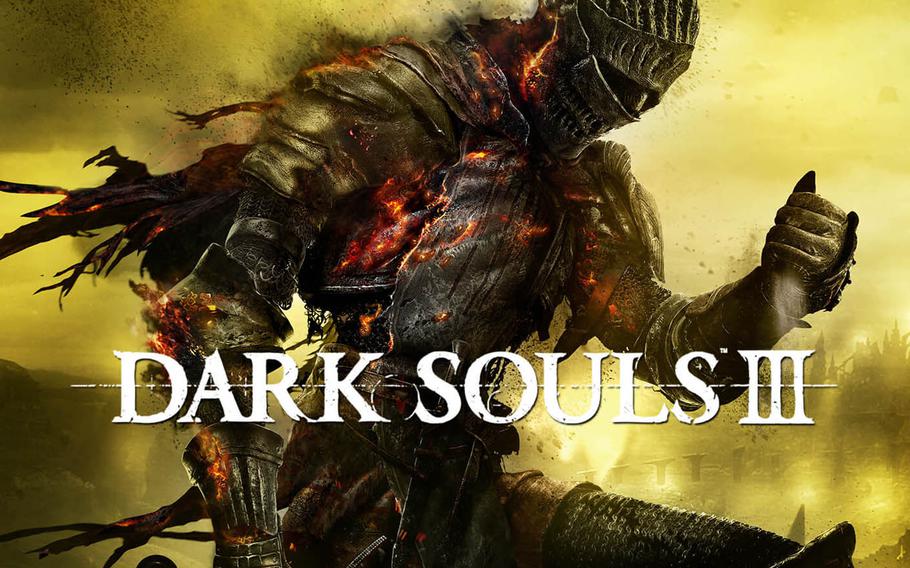 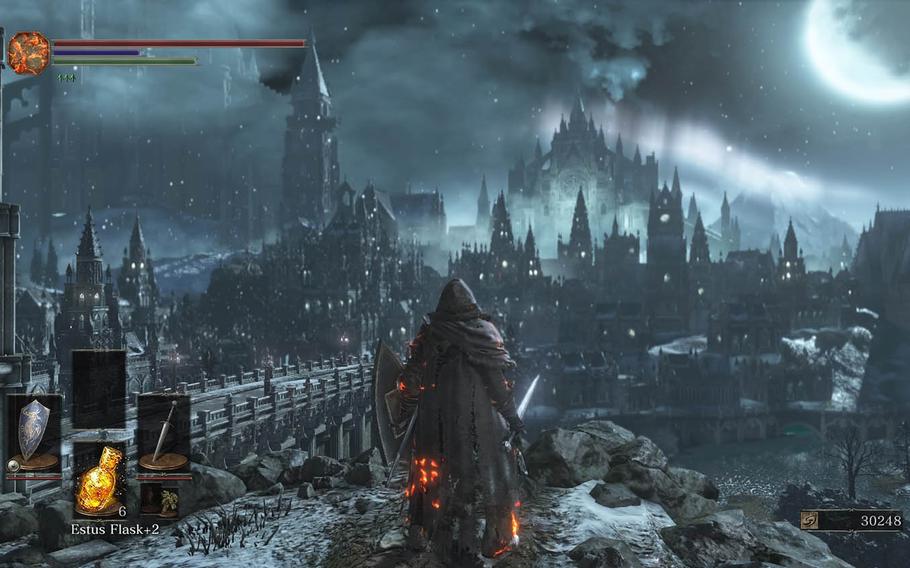 "Dark Souls III" is easily one of the most visually impressive titles in the series. What it lacks in hyper-realistic visuals it more than makes up for with a wholly unique art style. (Screenshot by Michael S. Darnell) 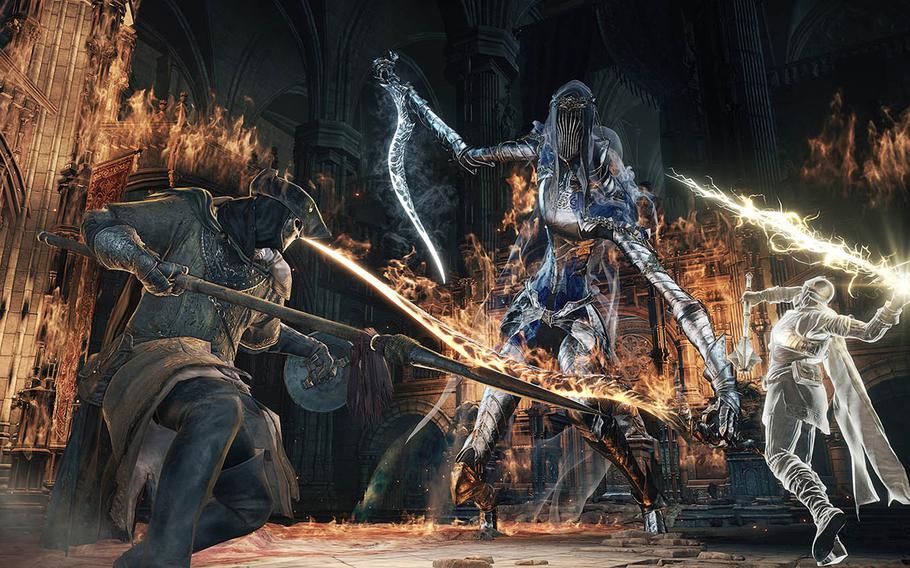 With "Dark Souls III," players once again find themselves in the familiar role of a lone warrior battling an army of evil. (Bandai Namco/TNS)

In the seven years since “Demon’s Souls” arose from nowhere and redefined a genre, numerous clones, offshoots and copycats have come to market.

Some, like the recent “Salt and Sanctuary,” were love letters to what has become known as the “SoulsBorne” series. Others, like Deck13 Interactive’s “Lords of the Fallen” were a little more crass in how they borrowed from critically acclaimed source material.

Both of those games are exceptionally challenging — as are any number of games that are described by their makers as “Souls-like.” What none of those game’s developers seemed to understand, though, is that there is much more to a “Souls” game than the widely discussed difficulty.

Let’s look at the recently released “Dark Souls III” as a primer on how those developers got it so wrong, and how FromSoftware continues to get it oh so right. There are four elements that make this most recent iteration of the “Souls” series perhaps the best of the bunch: combat, atmosphere, fairness and community.

First, for the uninitiated, a bit of background: The “SoulsBorne” series is an action/roleplaying game with a heavy emphasis on combat, exploration and atmosphere. “Dark Souls III” (really the fifth full-length game in the series) follows the same formula set down by “Demon’s Souls” way back in 2009.

Players will still explore an intricate fantasy world in ruins. Each fresh area is full of monsters, secrets and breathtaking sights. There is also the ever-present danger that has become the hallmark of the series.

“Dark Souls III” doesn’t necessarily break a lot of new ground, but what it does is further refine a formula seven years in the making.

Sure, there are some new elements, like the battle arts that give players new special attacks based on their equipped weapon. Online elements have been tweaked, allowing for a wide-range of play styles from the solo adventurer looking for some temporary help to defeat a troubling boss, to teams of players fighting in a battle royale.

By and large, though, this is the return to form “Souls” fans had been hoping for. In a sea of copycats, it’s a refreshing feeling for the original to return to remind us all exactly why we fell in love with the series.

A closer look at what makes this “Souls” so great:

Combat While hard-core fans have spent time picking over the minutia of the “Souls” lore, even the most versed fan would admit the story takes a distant back seat to the combat. It’s an action game first, a roleplaying game second.

Far from being a complaint, I find this continued single-minded focus to be one of the series’ greatest strengths. In “Dark Souls III,” that focus has resulted in a fantastic blending of the methodical approach to engagements found in “Souls” titles proper, with a dash of the faster combat found in series offshoot “Bloodborne.”

Diligent players will still be rewarded by taking their time finding enemy weaknesses, picking their battles and conserving movement. But enemies this time around are much faster than in previous “Souls” games, mirroring the monstrosities in “Bloodborne.”

Simply turtling behind a shield and poking at enemies with a spear (a favorite tactic of mine in earlier games) is a quick way to get flanked and promptly murdered. In fact, armor as a whole is less important this time around. Reflexes always beat stats in “Souls,” a rule that is more definitive in this entry.

Combat is undeniably one of the hardest components of a game to get right, but “Dark Souls III” manages to make nearly every playstyle viable, because what matters most isn’t how much time is spent min-maxing stats. It’s skill.

Atmosphere The second major element of “Dark Souls III” that FromSoftware continues to get right is its world building. Most of the world, like those in previous games, is connected. Each segment of the world has its own flavor, but there is a cohesiveness binding it all together.

The world of “Dark Souls III” is set in a fantasy world in which the good guys have been thoroughly trounced. The gorgeous stone castles are in ruins, overrun by hordes of nightmarish monsters. The cities abandoned, its cathedrals empty, save for undead priests performing unholy rituals.

As players pick their way through each level, they’re faced with reminders that the world is more or less irreparably damaged. Similar games haven’t quite nailed this aspect. To me, this is important as the gameplay revolves around the player dying over and over again.

Without the world being openly hostile to the player from the start, the constant cycle of death and rebirth would break the immersion. In “Dark Souls III,” death is part of the game and it is part of the world. They’re inseparable.

A quick technical note: The terrible load times that plagued “Bloodborne” on PlayStation 4 are nowhere to be found here. Death is constant, but the quick load times help ease the pain.

Fairness The third element of “Souls” that similar games fail to capture is fairness. There is a fine line between challenging and unfair. Some of the “Souls”-like games are definitely challenging, but they create that difficulty artificially by using cheap tactics like rubberband AI, poor hit boxing and sparse save points.

While there will undoubtedly be moments in “Souls III” that will cause frustration, I have yet to run into a moment that felt patently unfair. Enemies vary their attack patterns, but never in a way that seems random. Life-saving bonfires are generally spread out, but shortcuts and secret pathways abound to help ease passage from save point to save point.

There are plenty of opportunities to die, but very rarely do those deaths ever feel unearned. Paying attention and not rushing forward heedlessly will generally keep even a mediocrely skilled player (like myself) alive.

Community That’s not to say players will have to go it alone.

As with the previous “Souls” games, the online multiplayer component is immensely vital to its success.

Players can drop messages to one another, help each other out during boss battles and even invade each other’s worlds. “Souls III” expands on this basic concept by allowing for more complex online battles.

Fans of the “Souls” series have gotten somewhat of a bad rap online, mostly for their vocal criticisms of any game combat that isn’t a copy of “Souls.’” However, when it comes to online multiplayer, I’ve rarely found a fanbase so interested in helping each other out.

Sure, that’s because the game offers incentives for friendly interactions, with positively rated messages giving players a health boost and battle team-ups offering rewards for both players. Regardless of the reason, the troll-to-friend ratio seems much lower in “Souls” than in most online games.

In conclusion: “Dark Souls III” is a wonderful game, but a difficult game to sell to anybody who isn’t already aboard the hype train.

It’s certainly daunting, looking from the outside in. After all, it’s the fifth game in a series known for being punishingly difficult. It might seem more tempting to just pick up one the series’ clones on the cheap.

I’d argue that would be a mistake, for the reasons written above. Each of those reasons — and I didn’t even include the amount of potential gameplay that can be measured in years — make picking up “Dark Souls III” an easy decision for series veterans and newcomers alike.

A review copy of this game was provided by FromSoftware.