Combine hiking and history with these lovely destinations 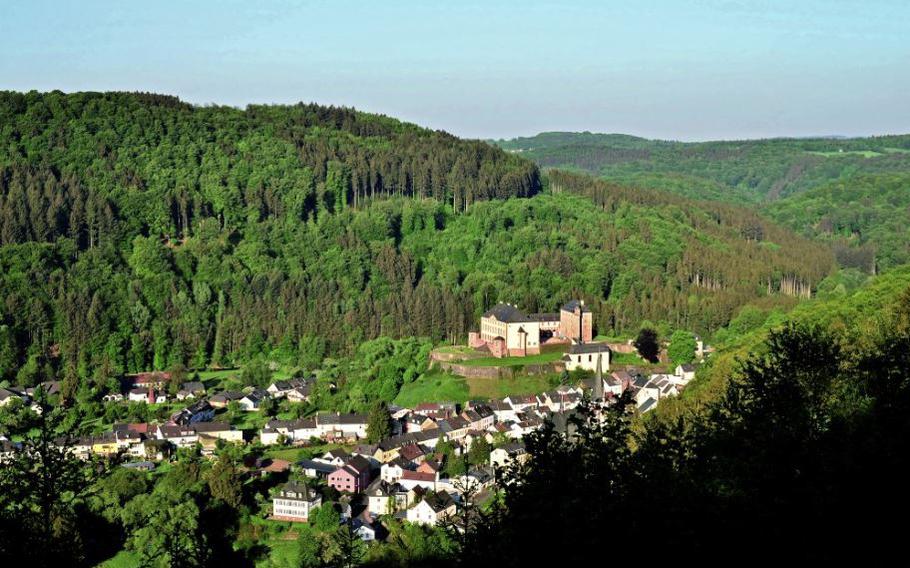 A hike north of Spangdahlem, Germany, yields a panoramic view of the village of Malberg and its castle. (eifel-direkt.de)

As we continue to abide by regulations aiming to keep coronavirus transmission at bay, staying home is our new way of life. When it’s safe and sanctioned to venture out into the big wide world once more, our first excursions need not involve any great distances. This week’s look at outings in or near cities with U.S. military installations unites hiking and history. Be sure to check your local command’s regulations currently in force before traveling any significant distance for recreational purposes.

Landstuhl, GermanyCalifornia dreaming? Make the goal of your next hike discovering the stand of sequoias on your doorstep. While seven trees do not a forest make, these particular ones tower at a height of 145 feet and are some of the thickest-circumferenced trees in the Rhineland- Palatinate. Planted by a forester in 1868 as a botanical feature, these massive beauties have managed to thrive through war and peace, far from their native home on the western slope of the Sierra Nevada mountain range in northern California.

While you could just drive out of Landstuhl along the L465 highway in the direction of Langwieden and park nearby, an alternative is passing by the trees on a hike along the St. James Way pilgrimage route. What’s officially the fourth stage of the northern route of the Palatinate St. James Way begins at the Naturfreundehaus Finsterbrunnental, passes by the Gelterswoog recreational area, through Bann and Kindsbach, alongside Nanstein Castle, through the town of Landstuhl and the Landstuhl Regional Medical Center, by the sequoias and through the forest until reaching the Fritz-Claus-Hütte near Bruchmühlbach-Miesau. From here it’s another 2.5 miles to the town’s train station. The total length of this stage is approximately 19 miles, not including the walk to the station. The trail marker is a white scallop shell against a blue background. Online: tinyurl.com/yynvum3m

Spangdahlem, GermanyA short drive north of Spangdahlem just past the designated healthy-air resort town (Luftkurort) of Kyllburg is the village of Malberg. Perched high above it on the spur of a mountain is the Schloss Malberg, a stately baroque palace designed in the early 18th century by Venetian architect Matteo Alberti and modeled upon the Villa Valmarana ai Nani in Vicenza, Italy. The palace’s unique complex consists of two houses, an arcaded building, former brewery and a chapel. Also of note is its Iron Garden, an exquisite French garden with a stone fountain.

While garden and interior tours will have to wait until the end of lockdown and are offered only from May through October, a panoramic view can be had of the magnificent structure from the nearby village of Mohrweiler. Park by the playground, from where a farm road leads off to the right. After ten minutes walking slightly downhill and turning right onto a path, a panoramic view of the loop of the Kyll River and Malberg Castle opens up. From here you have the option of backtracking to the road and following the signage down into Kyllburg to the Mariensäule, a slender tower topped by a statue of the Virgin Mary. A spiral staircase leads to a viewing platform, offering more striking views. Online: tinyurl.com/yymvcnsf

Rota, SpainTapas, sherry and flamenco are the holy trinity of nightlife in Andalucia, and a type of tavern in which to experience all three simultaneously is called a tabanco. The term dates back to the 17th century and is a fusion of the words for two different kinds of shops, the government-run estancos that sold stamps and alcohol, and tabacos, or cigarette shops. Tabancos generally have rustic interiors, with old posters or black and white framed photos as decor, and serve various kinds of sherry straight from the barrel. A small kitchen serves up local specialties, and oftentimes they’ll offer live flamenco music. While similar kinds of establishments exist all over Andalusia, the word tabanco itself is typical to Jerez de la Frontera, Cádiz and its vicinity.

The International Fair for Fortified and Noble Wines (Vinoble) proposes a self-guided itinerary dropping by several of Jerez’s best known tabancos. Some of their recommendations include Tabanco el Pasaje for smoked fish platters; Tabanco San Pablo for ajo caliente, a dish of tomatoes, peppers, garlic and olive oil; Tabanco Plateros for chicharrones, or pork rinds, paired with a glass of oloroso sherry. Online: tinyurl.com/y3nrpyyk

Mildenhall, UKSome 20 miles south of Mildenhall, on the banks of the River Stour, is found the market town of Clare. The place thrived during the Middle Ages, when trade in wool was a highly lucrative business. Clare’s prosperous past is reflected in its many architectural landmarks, including more than 130 listed buildings.

The Town Trail, a route marked with seven signposts and 21 brass pavement markers, leads past Clare’s highlights. Walkers pass the remains of Clare Castle, built in the 13th century by the Normans; the former railroad station; the Clare Priory, one of the oldest religious houses in England; the St. Peter and St. Paul Church with its rare carving of the pagan figure of a Green Woman, and the 14th century Clare Ancient House Museum, which features an ornamental type of plastering known as pargeting on its exterior. A booklet on sale for just a couple pounds in local shops provides much more detail about the town’s landmarks and heritage, and a .pdf copy of the trail is available for download at visit-clare.co.uk/things_to_do/the-town-trail.