Clouds and cocktails mix in open-air bar atop Vicenza basilica 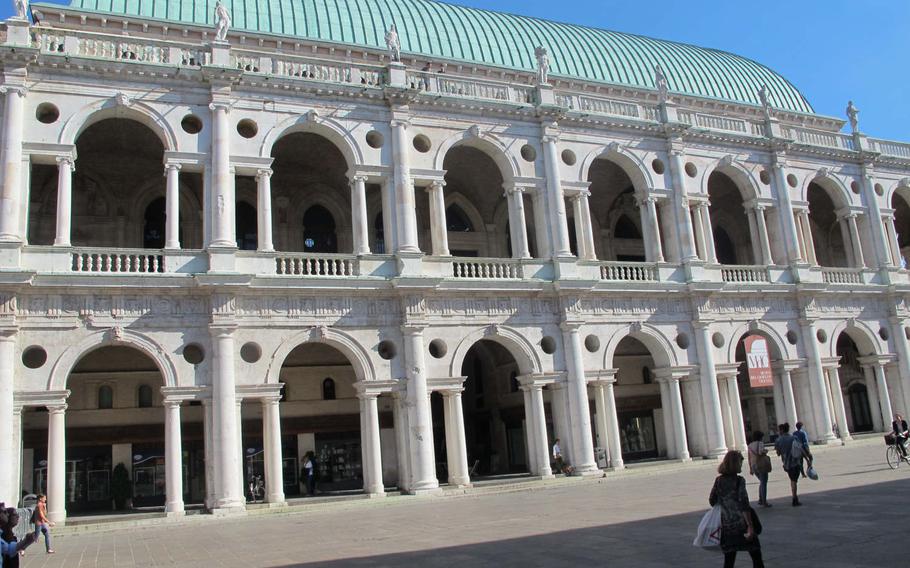 Buy Photo
Vicenza's landmark the Basilica Palladiana is an impressive white marble, copper-roofed structure designed in the 16th century by local boy Andrea Palladio, considered one of the greatest architects in history and revered by among others Thomas Jefferson. (Nancy Montgomery/Stars and Stripes)

Buy Photo
Vicenza's landmark the Basilica Palladiana is an impressive white marble, copper-roofed structure designed in the 16th century by local boy Andrea Palladio, considered one of the greatest architects in history and revered by among others Thomas Jefferson. (Nancy Montgomery/Stars and Stripes) 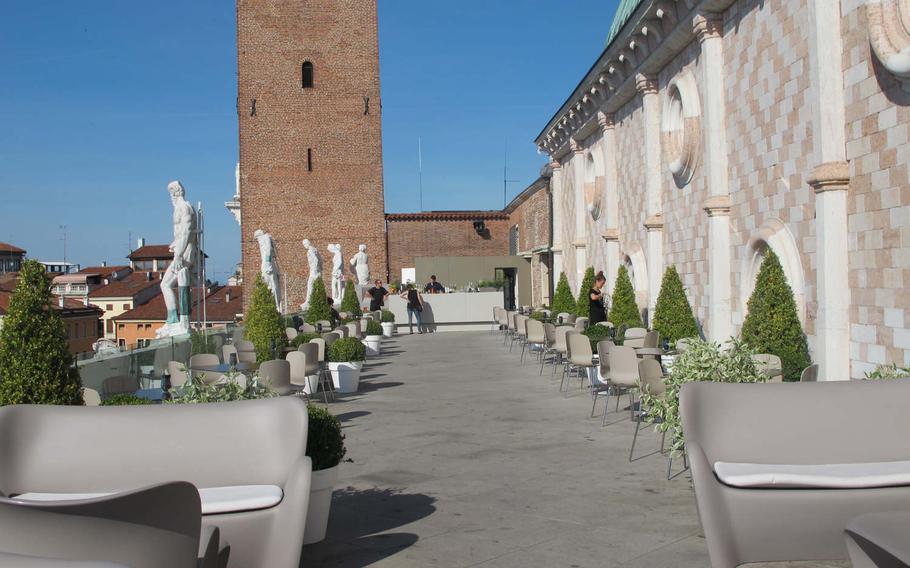 Buy Photo
Among the Basilica Palladiana's attractions -- shops, a restaurant, art and jewely museums -- is a terrace cocktail bar. (Nancy Montgomery/Stars and Stripes) 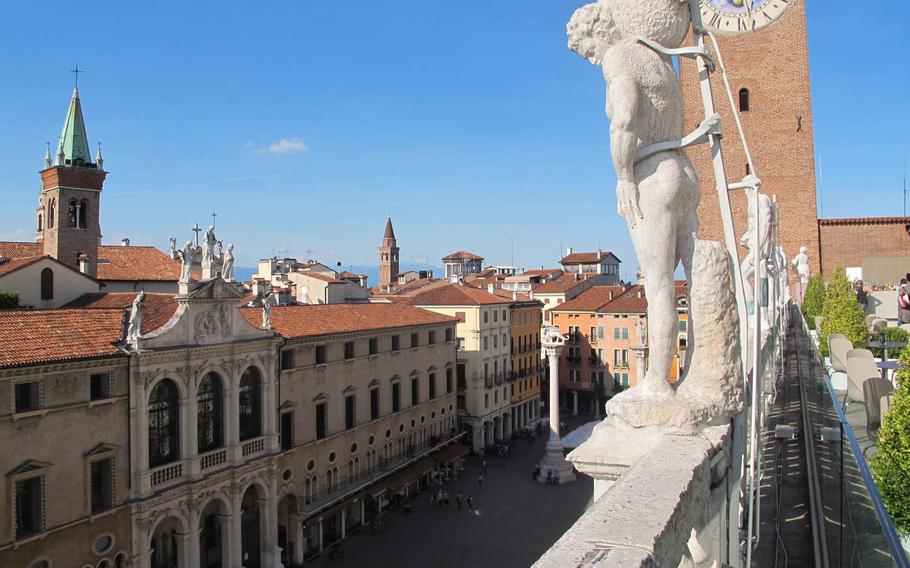 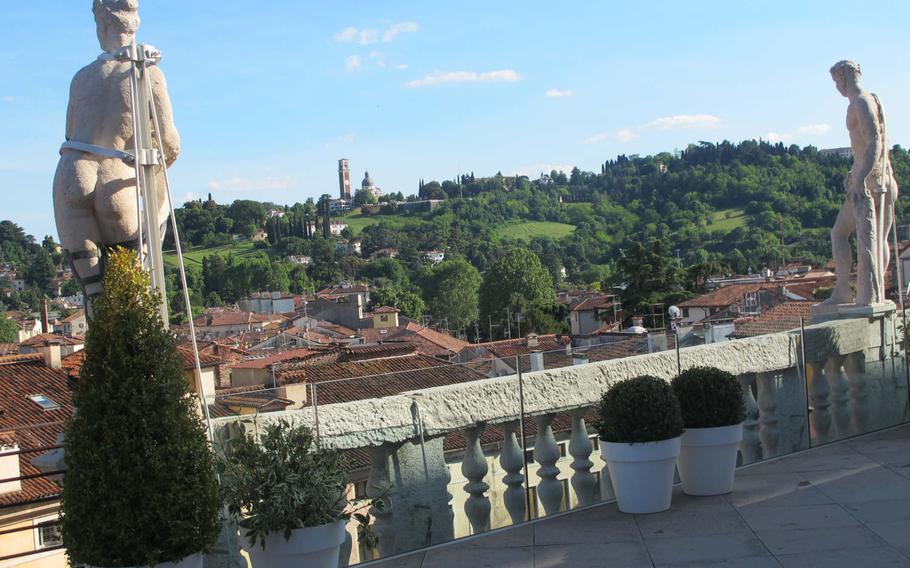 Buy Photo
The views from the Basilica Palladiana's terrace cocktail bar include the hill on which another famous Vicenza site, the Santuaria della Madonna di Monte Berico. (Nancy Montgomery/Stars and Stripes) 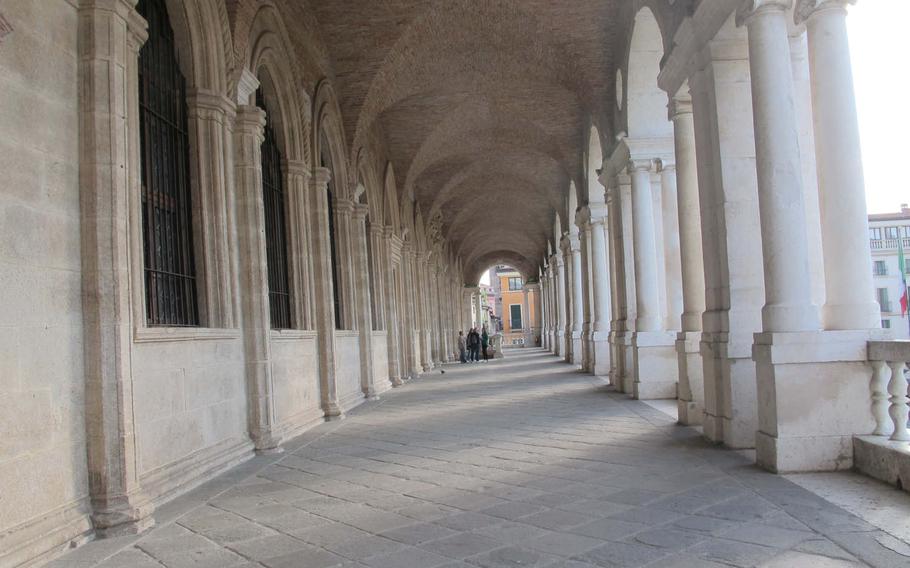 Buy Photo
One level down from the Basilica Palladiana's terrace cocktail bar is the loggia, equally impressive but cocktail free. (Nancy Montgomery/Stars and Stripes) 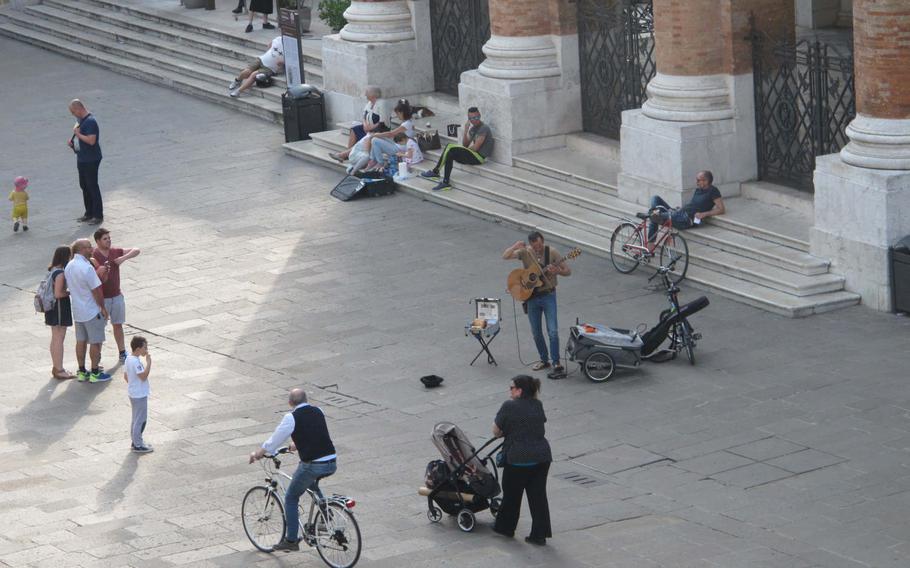 Buy Photo
A view from the Basilica Palladiana's terrace cocktail bar to the piazza below where a busker played an accomplished jazz guitar, launching into a lovely "Girl from Ipanema." (Nancy Montgomery/Stars and Stripes)

Perhaps you’re not invited to as many glamorous cocktail parties as you might like. There’s a remedy right in the center of Vicenza: an open-air cocktail bar atop the city’s jewel, the gleaming, white marble Basilica Palladiana.

There, high above the city’s main piazza and closer to heaven, anyone with the modest entry fee of 2 euros (about $2.22) can sip aperitivos, take in gorgeous views and indulge in any number of selfies. The word basilica means “royal house.” The only thing missing is the mingling.

The terrace bar is the cherry on top of the impressive structure that made a name for Padua-born Andrea Palladio, now widely considered one of the most influential architects in history, and, along with his other buildings in the area, turned the city into a UNESCO World Heritage Site.

Palladio, the son of a miller and the protege of the humanist and important man-about-town Gian Giorgio Trissino, was 38 when in 1546 he earned his first public commission with an interesting idea. He endeavored to deal with the perennially collapsing town hall in the Piazza dei Signori by building a Romanesque loggia around the existing Gothic building. The design was inspired by repetition of the Serlian window — made of a consistently sized arch flanked by two variably sized rectangular openings, resulting in both sturdiness and elegance.

The commission brought the architect a generous 5 ducats ($4,000 by some estimations) a month for the rest of his life.

The building also cost a great deal — 60,000 ducats — and was completed in 1614, 34 years after Palladio died. It towered over the piazza for more than three centuries, until the Allies bombed its characteristic copper roof, shaped like an inverted hull of a vessel, to smithereens during World War II. It was later rebuilt.

In addition to the terrace bar, the basilica contains municipal art and jewelry museums, shops and a restaurant and jazz club.

But it was the bar that beckoned recently on a sunny week-day late afternoon. A waitress came squinting over — it was really bright — and took my order for an Aperol Spritz, the city’s official cocktail and a magical elixir of the eponymous liqueur and prosecco.

I looked out at the statues on the roof and the ones atop the church across the piazza. I listened to the jazz guitarist playing below me in the piazza launch into a lovely “Girl from Ipanema.” I thought about Thomas Jefferson.

Jefferson modeled his home, Monticello, on another of Palladio’s works in Vicenza called Villa La Rotonda. He called Palladio’s architectural treatise, “The Four Books on Architecture,” his “bible.” But he never visited the Basilica, let alone its terrace cocktail bar.

Snacks, sandwiches, aperitifs, lunch or dinner available seconds away at scores of bars, cafes and restaurants.