Dinner delivered from the Casa Algarve in Griesheim, Germany, included three tapas, a starter and three main courses that featured a grilled fish platter for two with salad. (MICHAEL ABRAMS/STARS AND STRIPES)

Dinner delivered from the Casa Algarve in Griesheim, Germany, included three tapas, a starter and three main courses that featured a grilled fish platter for two with salad. (MICHAEL ABRAMS/STARS AND STRIPES) The three tapas we enjoyed from Casa Algarve in Griesheim were, clockwise from top, crabmeat croquettes, clams in white wine with garlic and fried anchovies. Rabbit paella is at top left. (MICHAEL ABRAMS/STARS AND STRIPES) 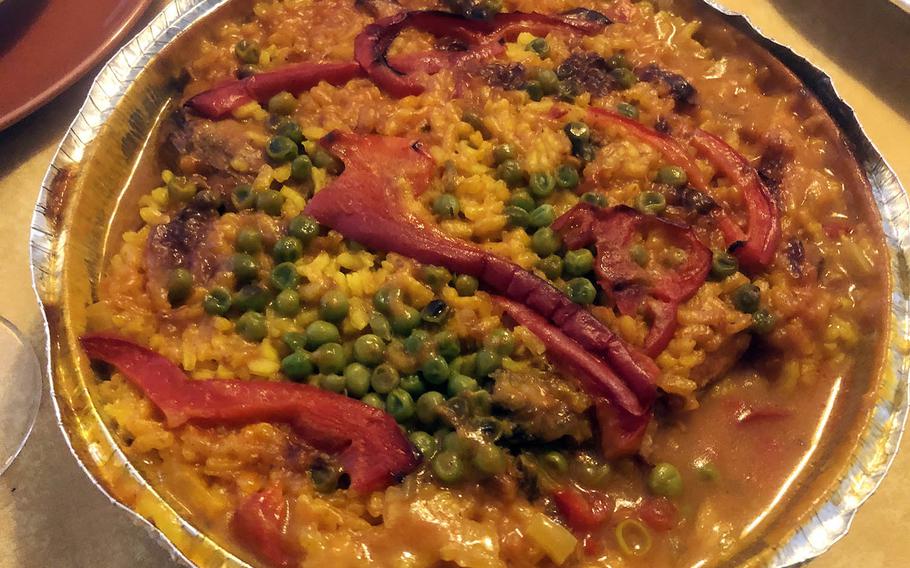 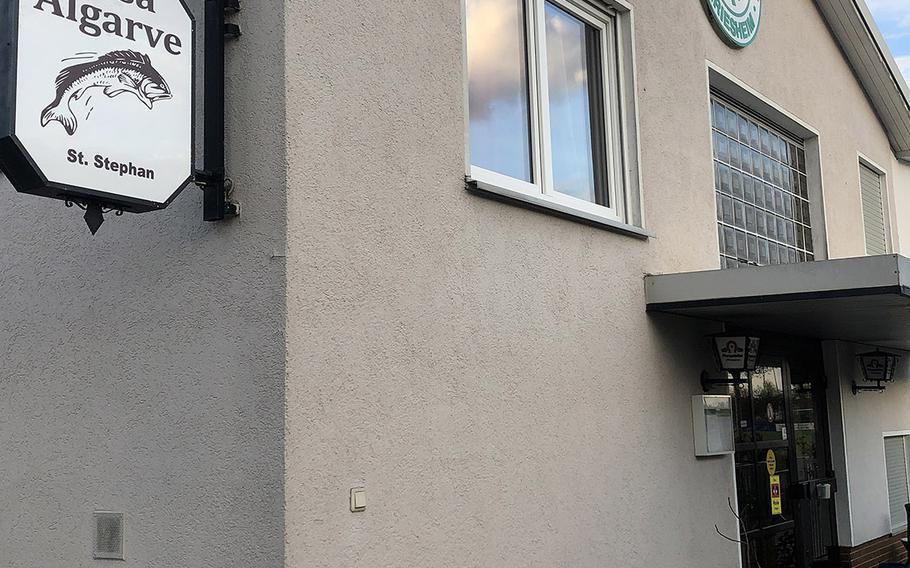 The Casa Algarve restaurant at the SV Sankt Stephan club grounds in Griesheim, Germany, features Portuguese and Spanish cuisine, along with schnitzels, pasta and pizza. (MICHAEL ABRAMS/STARS AND STRIPES)

We recently took a journey to the Iberian Peninsula for some of its wonderful cuisine.

Well, to be accurate, Iberia came to us, courtesy of the Casa Algarve restaurant in Griesheim, Germany.

With the coronavirus keeping restaurants open only for takeout or delivery, it has been a while since we visited one of our favorite restaurants. So, at a small family gathering we had our meal delivered by the restaurant’s friendly staff.

Casa Algarve is in the clubhouse of a local soccer team, a mile from the U.S. Army’s Dagger Complex.

Over the years, restaurants offering various cuisines have come and gone there. The last one was a Spanish restaurant and when it changed hands, a Portuguese family took over. One of the former owners stuck around to help, so they now serve both Spanish and Portuguese specialties.

Being at a German soccer club, they also offer schnitzel, pizza and pasta. But we chose dishes from the Iberian Peninsula.

The food arrived still quite hot and smelled delicious. We ordered three tapas, those small Spanish dishes that you traditionally eat with sherry after work and before dinner. We tried the crabmeat croquettes, clams in white wine with garlic and fried anchovies.

We chose one starter, mainly because the ingredients piqued our curiosity: cogumelos casa, fried mushrooms served with slices of chicken and feta.

For the main course, we had bacalhau no forno, paella de conejo and grelhada de peixe.

Paella, the popular saffron rice specialty, is Spanish but often also found in southern France. This version was with rabbit, but Casa Algarve also offers it with seafood, as a mix of chicken and seafood, or for those who won’t eat anything with a face, vegetarian.

Bacalhau is dried and salted cod. A specialty of Portugal and other seafaring nations (it is easy to transport and doesn’t spoil), it is first rehydrated, then cooked. This version is baked with potatoes, tomatoes, onions and olives in a white wine sauce. Served at the restaurant, it comes on a clay plate in the shape of a rain gutter.

Grelhada de peixe is a grilled fish platter for two. It’s a mix of white fish, including hake and monkfish, plus shrimp and squid. It comes with rice and salad.

Let it be said, all the dishes were delicious.

One of the diners was Spanish and he gave the paella a thumbs-up. But a rabbit is small, and there are a lot of bones to pick to enjoy the meat. Many people would probably feel more comfortable ordering one of the other versions.

The bacalhau is one of my favorites. The cod is meaty and the sauce with the potatoes is mouthwatering.

The fish platter was more than big enough for two and was very satisfying. Although the choice of fish might be a bit monotonous, the shrimp and squid made up for it.

We all enjoyed the tapas, especially the crabmeat croquettes and the mushrooms. They were not overcooked, the chicken wasn’t dry and the feta was soft and tangy. It was a good mixture that will be ordered again.

If you can find a good vinho verde — Portugal’s “green,” or young, wine — it goes well with all the dishes. We were unsure of the quality at the supermarket, so we enjoyed a good Spanish white from the Rioja region instead. Although better known for its reds, the whites and roses from here are worth trying.

My only disappointment with Casa Algarve has nothing to do with quality or taste. It’s that they don’t have one of my Portuguese favorites on the menu: porco a alentejana, or pork with clams.

I’ve never tried the schnitzels, but they are popular, and all the portions here are more than adequate. After all, they normally have to feed hungry soccer players.