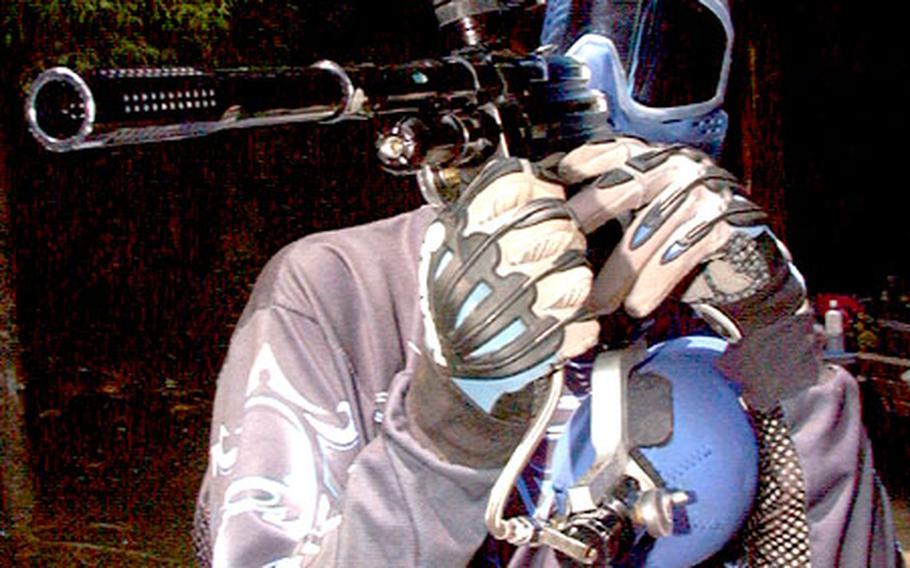 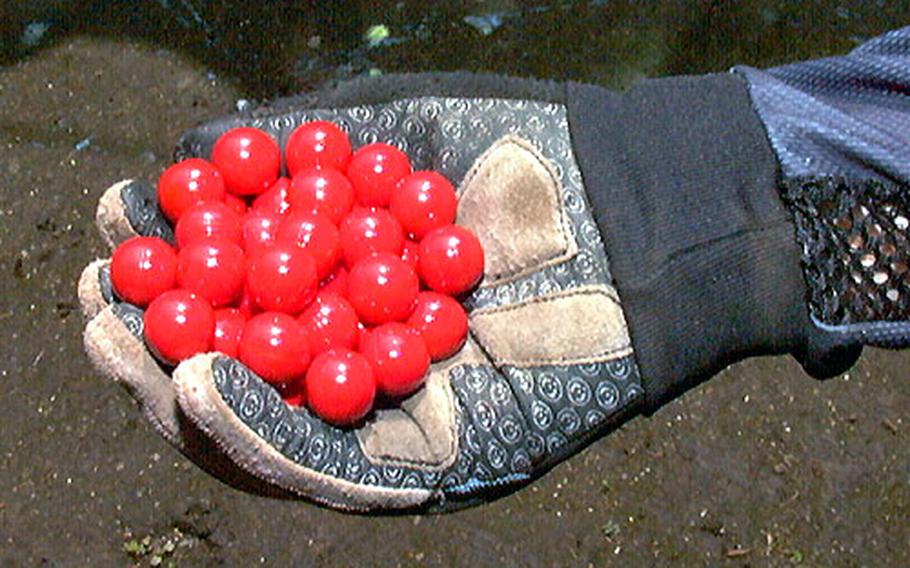 A case of 2,000 paintballs costs $60 at Tama Hills Outdoor Recreation Area. With a shell made of gelatin, the balls are biodegradable. (Jennifer Svan / S&S) 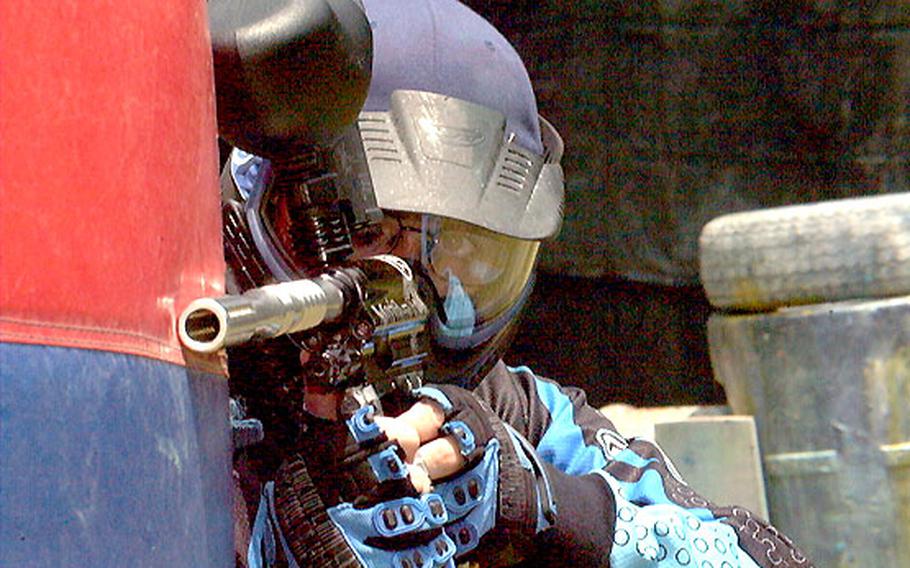 Staff Sgt. Donald Baum, 28, of Yokota Air Base, is on a team of local U.S. military members who recently won the equivalent of Japan’s national paintball tournament. (Jennifer Svan / S&S) 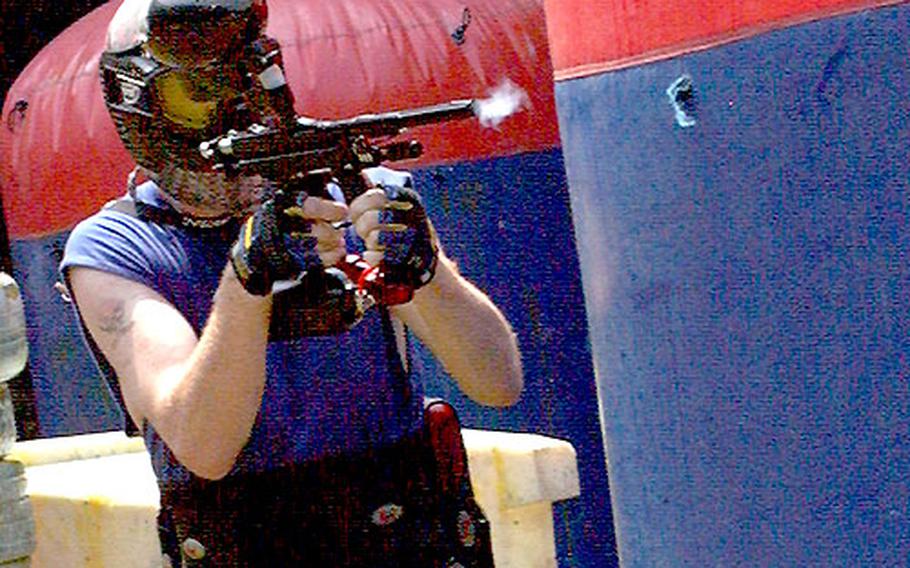 A touch to the trigger unleashes a furious barrage of 17 paintballs a second.

For paintball addicts, the game can be the ultimate adrenaline rush.

Bergeron is a paintball junkie. The satellite communications technician at Camp Zama, near Tokyo, has sunk thousands of dollars into, he hopes, the best paintball equipment money can buy.

Every Saturday, Bergeron meets at Tama Hills with a group of military guys from across the Kanto Plain. And they&#8217;re as fanatical about the sport as he.

The trio found each other playing paintball at Tama, which has a paintball program open to all U.S.-Japan status of forces agreement ID card holders and their guests. Games are every Saturday on the speed-ball field &#8212; a large, flat, open area with man-made obstacles &#8212; and the woods field, in the trees with hills and gullies.

Bergeron, Baum and Rawlings prefer the faster pace of the speed field, where they often unload more than 2,000 paintballs a day. They compete against other teams in five-minute matches, but sometimes split up when a lot of people show up to play.

In May, with two other team members and an alternate, they branched out beyond Tama&#8217;s fields and participated in the Shizuoka Open, one of two annual national paintball tournaments held in Japan. As one of nine five-man teams &#8212; and the only group of non-Japanese &#8212; they succeeded beyond their wildest dreams.

The tournament was played on a soccer field, about twice the size of Tama&#8217;s speed field. That took some getting used to, Bergeron said: Though it was easier to move around, with more obstacles to hide behind, &#8220;you had to worry about a much larger area.&#8221;

At Tama, the object is to eliminate the other team, Baum said.

On a typical Saturday, Tama&#8217;s speed field is littered with remnants of thousands of blue, green, yellow and red paintballs. The paintball shell is a thin-skinned gelatin capsule. Since the paintballs are nontoxic, biodegradable and water soluble, they completely dissolve in a few weeks, according to one of the sport&#8217;s Web sites, paintball.about.com. The paint rinses off of clothing and skin with just water.

The safety gear required at Tama &#8212; and at most paintball facilities &#8212; is a face mask fully covering the ears and chin, Bergeron said. But he and his teammates usually also wear other protective gear, like gloves with rubber padding, long sleeves and pants.

Though paintball is considered a safe sport &#8212; statistics show it&#8217;s safer than golf and badminton, Bergeron said &#8212; a paintball can sting when it meets bare skin. At Tama, competitors can set their air guns to fire paintballs at a maximum 128 mph.

Bergeron compared it to being snapped with a rubber band.

After taking a break from a round of paintball on a recent hot summer morning, Rawlings insisted that the red welts on his bare arms looked worse than they felt.

Paintball is played in countries around the world but is just starting to gain a following in Japan, Bergeron said. He and his teammates hope to play in another national tournament slated for November &#8212; and they&#8217;re always seeking more players. When Bergeron began playing at Tama three years ago, 10 to 12 paintball participants would show up on a typical Saturday; now, the sport attracts around 20. Baum recalled one recent Saturday when all 45 guns were rented out.

Anyone 18 or older can play at Tama; a parent or legal guardian must accompany dependents ages 13 through 17.

Good equipment, however, definitely gives an advantage, said Bergeron, who spent $1,200 on a mail-order paintball gun. Batteries power air through the gun; all balls go through a hopper, where a small paddle mixes and keeps a steady stream of balls ready to fire.

For more information about paintball at Tama Hills, go to www.tamapb.cjb.net, or www.brandonbergeron.com.

Open games of paintball are every Saturday, year-round at Tama Hills Outdoor Recreation Area. Games are open to all U.S.-Japan status of forces agreement ID card holders and their guests. All participants must be 18 or older, though dependents from ages 13-17 may participate if accompanied by a parent or legal guardian.

Private games, with a minimum of 20 participants and a maximum of 40, may be reserved at least 30 days in advance for $24.50 a person. Fee includes field usage, one 20- ounce air tank, 200 paintballs and gun and mask if needed.