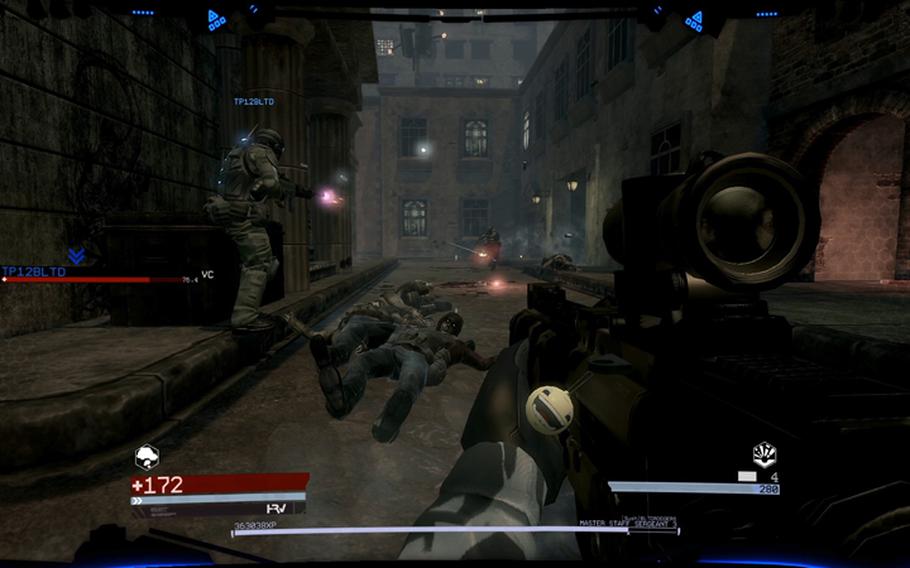 'Blacklight: Tango Down' is a downloadable shooter set in the near future. (Games Press)

“Blacklight: Tango Down” is a first-person shooter set in the near future in a war-torn European city. What this downloadable game offers that’s different from others in its class ... well ... there is nothing to set it apart from the assembly-line-created FPS fodder on the market.

Zombie Studios noticed the massive number of hours players are logging on multiplayer online games. Some of these players haven’t even completed the single-player campaigns on games they’ve owned for years, yet they still log enough hours a week for it to be considered a part-time job.

Taking this into account, Zombie Studio has forgone the development process of an expansive campaign mode and focused on online play and, in turn, kept their production cost to a minimum. This, and the fact it’s a download-only game, allowed them to produce a well-polished game that has enough fast-paced action to satisfy most adrenaline junkies at great price.

My first experience with the game was less than enjoyable. I died only to respawn and die some more. The lack of a tutorial level forced me to find the options menu and study the button configuration, something I haven’t done since instruction manuals were more than just wastes of paper.

After a painful learning curve, I started enjoying the game quite a bit.

The levels are nicely balanced but a bit small. Weapons are standard issue, and players have the ability to unlock new weapons and attachments as they climb the ranks.

The Hyper Reality Visor, which is toggled with the directional pad, allows players to locate friendlies and enemies though walls in what appears to be something like infrared vision — nothing new here.

The one feature I don’t think I have seen before is a digi-grenade. These are like miniature electromagnetic pulse bombs that temporarily disable visors within its sphere of digital static.

The first time I was hit by one of these, I thought my Xbox 360 was crashing. My screen looked like a blue screen of death with some kind of code streaming across it.

The visuals on this game are top notch. It is really impressive to see such good graphics for such a small price tag. Characters and maps are highly detailed and have a sense of realism to them. It definitely looks more expensive than it is.

Multiplayer modes are pretty standard with Deathmatch, Team Deathmatch and Control Point. There is also a co-op game mode called Black Ops where up to four players can attack objectives. This is a good way to get a feel for the controls without having to suffer through the deathfest I did. However, this mode isn’t worth much more than that. The AI is very stupid as some of the enemies will just stand there looking at you from a few feet away making noise as you hose them with lead.

Complaints aside, I highly recommend this game to anyone looking for a fast-paced game with high-tech weaponry.

If you really like the game, rest assure there will be a sequel, according to the developers who say it is already in development. Fortunately, the next iteration will have larger maps and the inclusion of vehicles. Its target release date is next summer.