'BioShock' and awe above the clouds 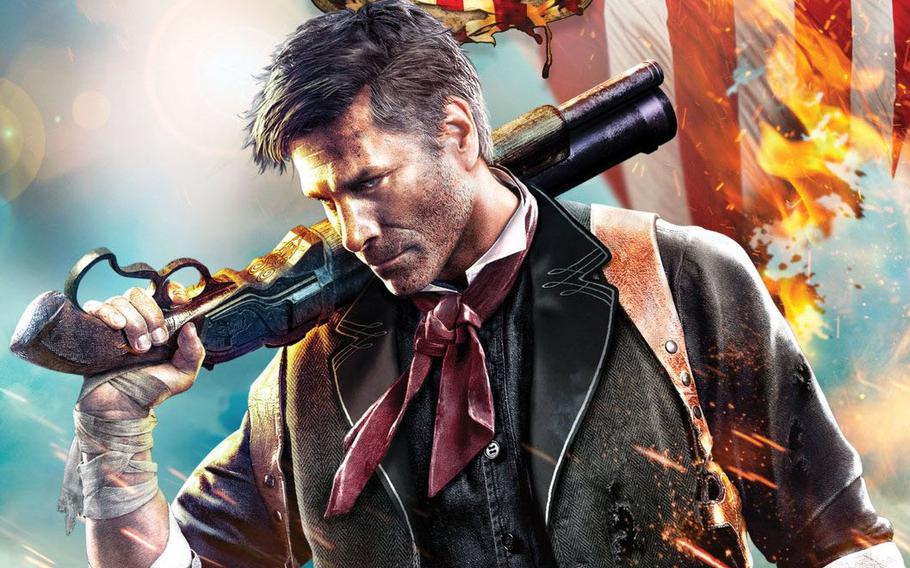 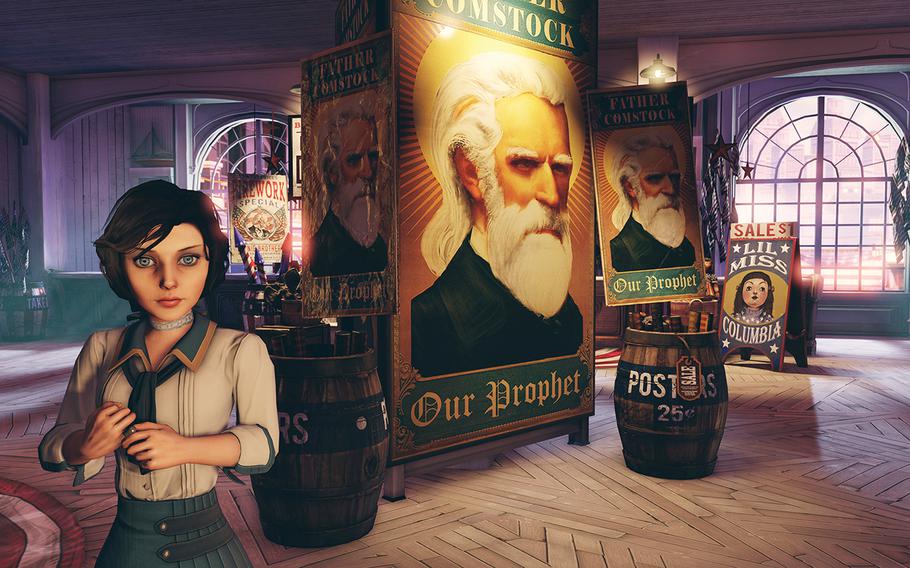 Although your mission is to rescue Elizabeth, she quickly turns into a helpful partner in your adventure. (Courtesy of Irrational Games) 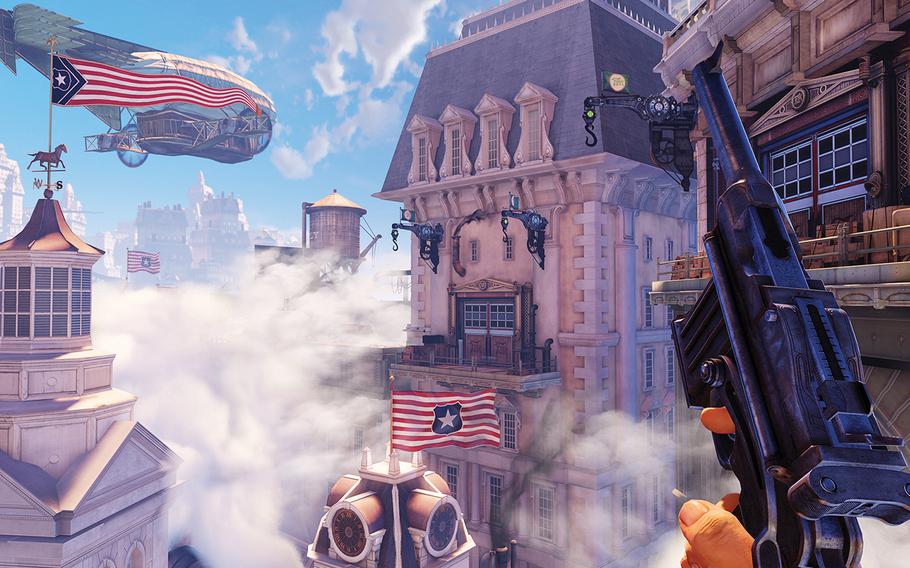 You do most of your fighting with firearms, ranging from pistols to handheld Gatlin guns. While you have access to a wide variety of weapons, your ammo is limited to what you can pick up from fallen foes or buy with the cash you discover hidden in nooks and crannies. (Courtesy of Irrational Games) 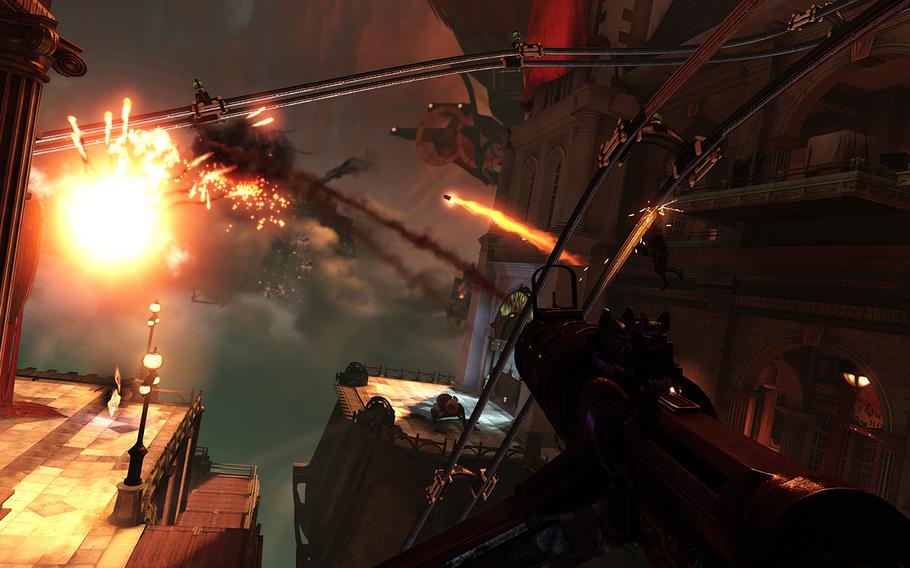 Different parts of Columbia are linked by a high-speed transit system known as Sky-Lines, which feature cars that run on elevated metal tracks. You can use a magnetized hook to grab these tracks and buzz from one location to another. (Courtesy of Irrational Games)

This spring, “BioShock” moves from the depths of the sea to the highest of heights and again shows how mankind can derail a utopian dream.

“BioShock Infinite” is set in the same world as the first two “BioShock” games, which introduced us to Rapture, an undersea city that had spiraled into chaos. This time, the action unfolds in Columbia, a fantastic city that floats in the clouds thanks to innovations in quantum physics.

In the first-person shooter developed by Irrational Games for 2K Games, you play as Booker DeWitt, a former U.S. cavalryman and Pinkerton agent with a dark past. To pay off gambling debts, Booker agrees to recover a girl named Elizabeth, who has been imprisoned since infancy in a tower in Columbia.

The year is 1912, and America is filled with boundless energy, pride and patriotism. Large doses of these qualities have made their way skyward with Columbia’s inhabitants. Unfortunately, they also have been twisted into greed, racism and xenophobia thanks to Zachary Comstock, who rules Columbia and acts as the prophet for a disturbing cult. Of course this sort of leadership breeds rebellion — in this case, led by a group known as the Vox Populi, or Voice of the People. When the forces of the prophet and the Vox square off, things get exceptionally nasty — with Booker and Elizabeth caught in the middle.

Fans of the “BioShock” franchise will find the basic game play very familiar.

You do most of your fighting with firearms, ranging from pistols to handheld Gatlin guns. While you have access to a wide variety of weapons, your ammo is limited to what you can pick up from fallen foes or buy with the cash you discover hidden in nooks and crannies.

You’ll want to conserve your scant supply of ammunition, so it’s important to weaken your enemies by using “vigors.” These are special powers that are similar to the “plasmids” in earlier “BioShock” games. They include the power to levitate, shock, burn, ram or possess your enemies. You also can call down a murder of crows to peck at your foes, conjure a force field to block their attacks or douse them with a stream of water — especially handy against robots that are powered by electricity. These abilities are initially acquired by drinking potions that you can find lying around. After they’ve been acquired, you need to consume “salts” to maintain the power to use them.

A typical encounter could involve hurling a murder of crows at a group of enemies to distract and weaken them and then “possessing” one to turn him against his companions. You can then turn to more traditional methods of mayhem to take out the survivors. This can all be accomplished quickly and smoothly thanks to a well-designed controls system.

While this might seem somewhat familiar, “Infinite” delivers some major upgrades to the “BioShock” formula with its enthralling story and fascinating characters, including an excellent companion.

In the two previous “BioShock” games, you often felt like you were investigating a crime scene rather than participating in an adventure. The dirty deeds had been done and a few hundred perpetrators were still on the loose. It was your job to figure out what happened and deal with the riffraff.

This time around, your character is a key figure in the events that transpire as the utopian city begins to unravel. As you try to rescue Elizabeth, you run into the egotistical prophet, a greedy robber baron, a conniving revolutionary, a bitter old soldier and eccentric scientists. These all display a keen interest in your activities — and often a strong desire to do you harm. The result of all this is that the action feels more urgent and exciting than previous games.

The most intriguing aspect of “Infinite” is the young woman Elizabeth. She isn’t the proverbial damsel in distress or a simple sidekick. She’s a lively, strong-willed and incredibly helpful companion who’s an equal partner in the adventure. Elizabeth will pick locks and pick up hidden coins for you. In combat, she’ll scour the battleground looking for ammunition, medical kits and salts that she can toss to you when you run low on any of these key items. She’s also pretty smart for a video game companion. Although you’ll occasionally trip over her when exploring a room, she never gets in the way or needs to be rescued in combat.

However, her most important ability is the power to reach into a tear in the fabric between parallel universes. This allows her to bring weapons, healing and allied robots to your aid. It also allows you to travel to alternate universes where events have unfolded in a slightly different way. This power becomes more important as the story progresses.

The individual missions are well-designed, with a good balance of fighting, exploration and story-telling. Battles are intense, with a wide mix of foes who know how to use the cover and coordinate attacks.

Like the undersea city of Rapture in the earlier “BioShock” games, Columbia itself plays a key role in setting the tone and advancing the action.

At the beginning, Columbia feels much like Disney World’s Main Street USA, with all of the quaint charm of the 1910s. But that all changes when you visit the portions inhabited by the oppressed working classes and it shatters when revolution takes hold. While it never turns as dark and gloomy as Rapture, it definitely takes on a more sinister nature.

The city’s sky-high nature is noticed most in its transportation system. Different parts of Columbia are linked by a high-speed transit system known as Sky-Lines, which feature cars that run on elevated metal tracks. You can use a magnetized hook to grab these tracks and buzz from one location to another. Although you might do this a few times while exploring, you’re more likely to take to the rails in combat. You can leap onto a rail to escape a sticky situation or zoom up to an enemy and perform a flying tackle. It can be a bit tricky at first, but it’s definitely a lot of fun.

The game earns its mature rating because of blood and some gruesome finishing moves in combat.