Beautiful ‘Witness’ leaves something to be desired 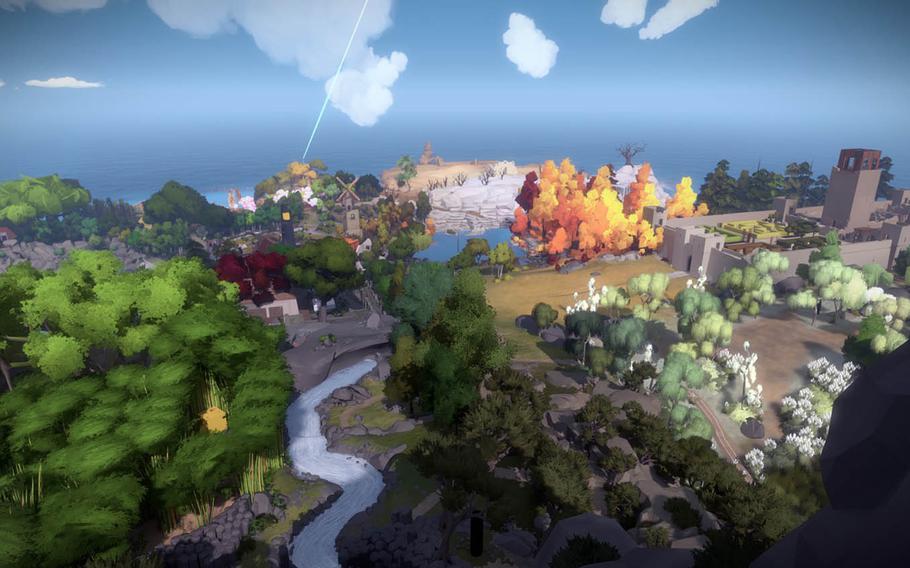 The world of "The Witness" is wide open. Some parts are locked off until a puzzle is solved, but nothing is artificially blocked off. Puzzles in “The Witness” take on different variations, but are ultimately the same type of brain-teaser. (Courtesy of Thekla Inc.)

Puzzle games are tricky to get just right.

Too difficult, and players can get frustrated. Too easy, and they get bored.

Most puzzle games help mitigate those issues in a couple of ways.

One, they’ll switch up the types of puzzles so that someone who is bad at a particular type of puzzle might find the next easier to grasp. Two, they’ll present the puzzles in a linear fashion, so that no matter how difficult the issue might be, the solution will always be understandable at that particular point in time.

So, what does a puzzle game look like when those safety nets are removed? Famed indie developer Jonathan Blow, creator of the excellent puzzle/platformer hybrid “Braid,” created “The Witness” in what seems to be a direct response to that question.

“The Witness” drops players into a vast, open world with no explanation, no exposition and no expectation of success. It’s up to the player to figure out the logic of the world and then to use that logic to solve hundreds of puzzles scattered throughout.

There is no hand-holding, no tutorials and nothing more than self-generated satisfaction to drive the game forward. If you enjoy solving puzzles, great; “The Witness” might be exactly what you’re after.

However, if you’re easily frustrated or need other reasons to continue playing other than getting to play more (i.e. story, cutscenes, etc.), this isn’t for you. Its entire design is anathema to that mindset.

Now, I said this “might” be a sure pickup for puzzle fans. I say that not because it’s not a solid puzzler (it is) or that the visuals are substandard (they’re absolutely gorgeous) or that it’s not technologically sound (rock-solid performance for me).

I say that because unlike many puzzlers that offer a variety of brain-teasers to solve, “The Witness” offers a single type, with a variety of iterations thereof. Every puzzle in the game is a maze, solved by moving a dot from one point to another. There are dozens of permutations of this and just as many clues presenting ways to solve them, but they’re all basically the same type of puzzle.

There are simple mazes that will have the player keep track of how they’ve traversed through a hedge maze and then ask that they replicate their movements on the puzzle interface. Another example is one in which the solution includes looking at a tree to see where an apple sits on a branch, and then using that as a reference to find the maze’s end point. Regardless of the trappings, all of the puzzles are mazes.

I found it an interesting way to present a puzzle game, but ultimately one that got boring relatively quickly. The best times I had with “The Witness” were when I played in small bursts. Solve a row of mazes, switch off and come back later in the day. Playing for long stretches of time really made the main flaw of the game stick out.

That flaw is the open-world design.

While I immensely enjoyed exploring the vivid, colorful world of “The Witness,” its open nature was detrimental to the core of the gameplay. When faced with a difficult puzzle, it became hard to discern whether the difficulty was due to not quite understanding the solution, or being in a spot in the world where I wasn’t yet supposed to be.

“The Witness” has an internal logic language, so to speak. The more puzzles you solve, the more pieces of the language you learn. What happens — often — is that you run into puzzles that might require information that you don’t yet possess. The necessary information might be locked behind a row of puzzles on the other side of the island.

Then again, maybe it isn’t. Maybe it’s just a challenging puzzle. It’s difficult to say. I feel as if a bit more structure to the game’s world would have helped make its underlying mechanics less muddled.

Other than that, though, “The Witness” definitely scratches an itch I wasn’t even aware I had. It’s a beautiful adventure with more than enough challenge. It has some elements I personally wasn’t fond of, but those are definitely subjective issues that might or might not be relevant to others.

If you’re a puzzle game fan — especially a fan of maze puzzles — “The Witness” is a can’t-miss title. Others should approach, but approach cautiously.