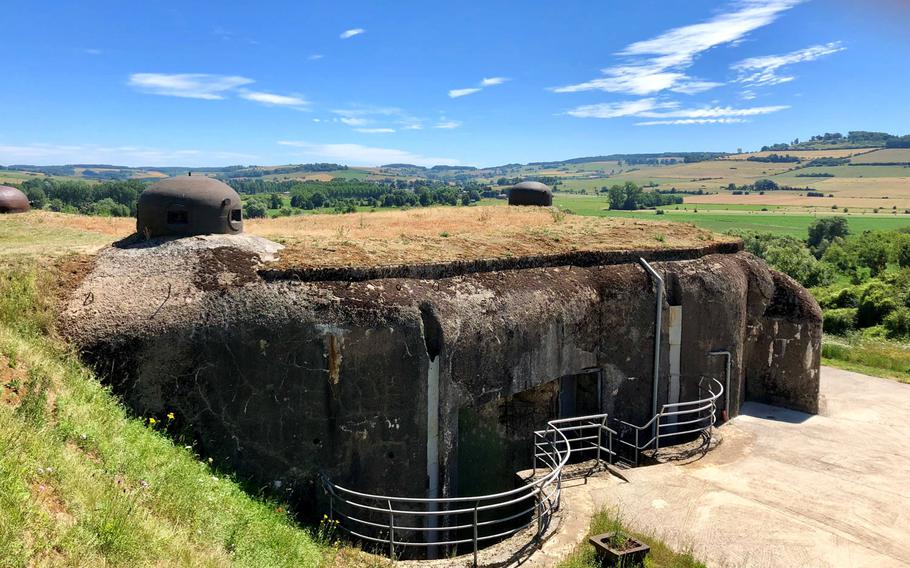 Buy Photo
One of the two combat blocks of La Ferte-sur-Chiers near Sedan, France. The fort, located at the northern end of the line, was the smallest and weakest of the fortifications, and the only one occupied by the Germans during the fall of France in 1940. (Slobodan Lekic/Stars and Stripes)

Buy Photo
One of the two combat blocks of La Ferte-sur-Chiers near Sedan, France. The fort, located at the northern end of the line, was the smallest and weakest of the fortifications, and the only one occupied by the Germans during the fall of France in 1940. (Slobodan Lekic/Stars and Stripes) 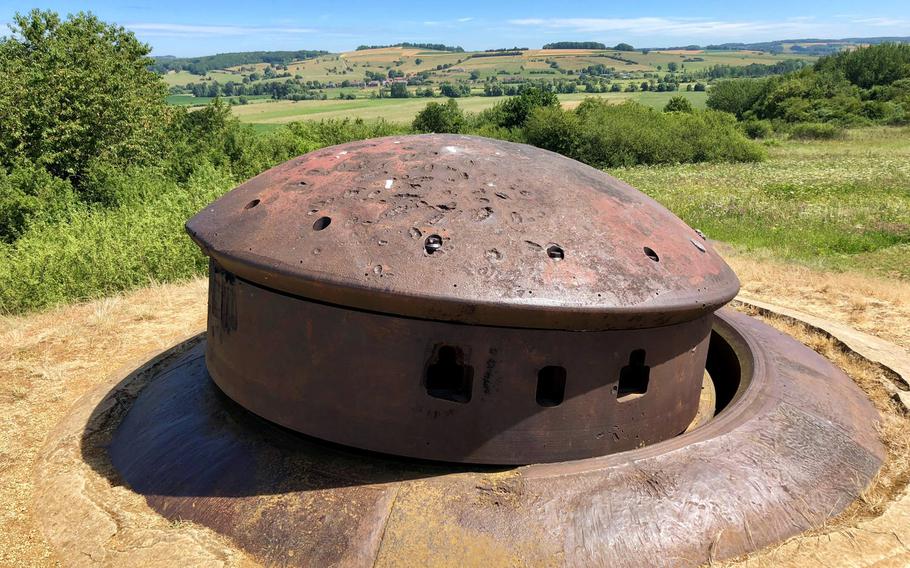 Buy Photo
A destroyed cupola at the fort of La Ferte, the only part of the Maginot Line of fortifications that the German army succeeded in occupying in 1940. Once its supporting infantry had withdrawn, the attackers flanked the little fort and approached it from behind under intense fire. (Slobodan Lekic/Stars and Stripes) 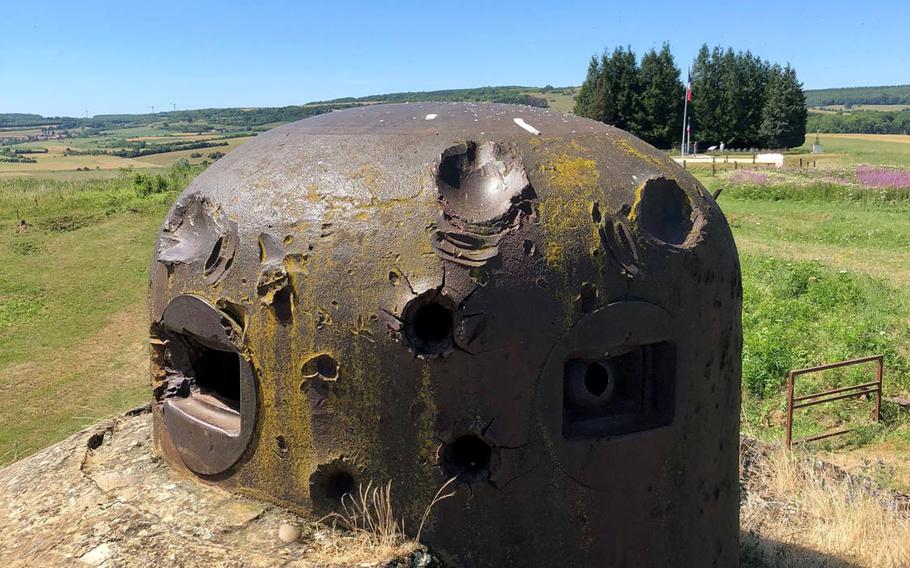 Buy Photo
A machine gun cupola on the little Fort of La Ferte, after being hit by numerous German artillery shells. None penetrated, but a lucky hit on the edge of one of the openings sprayed shrapnel inside, killing all three occupants. (Slobodan Lekic/Stars and Stripes) 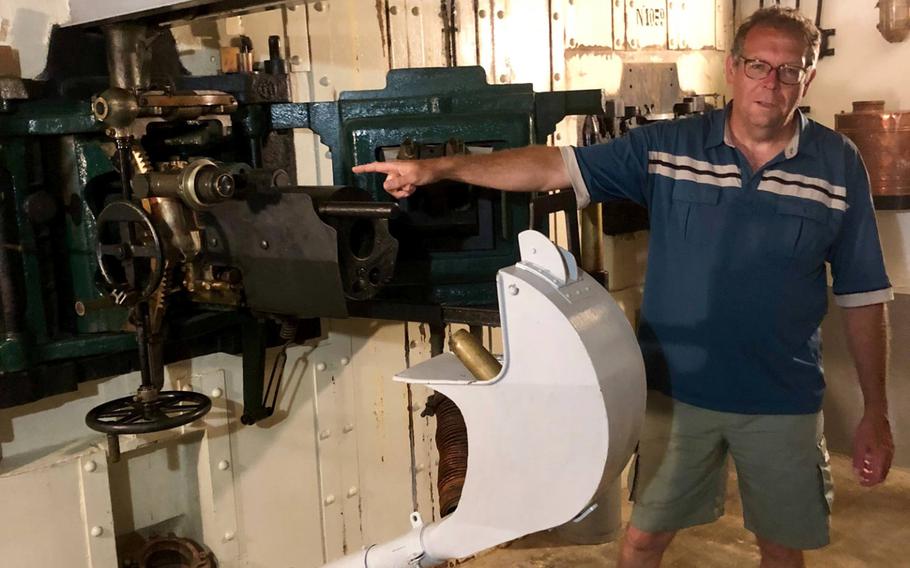 Buy Photo
Jean-Claude Delhez, a prominent WWII historian, points to a cannon inside the fort of La Ferte. The fort has changed little since it was occupied in 1940 because the Germans used it for propaganda purposes and thus left it in its original state. (Slobodan Lekic/Stars and Stripes) 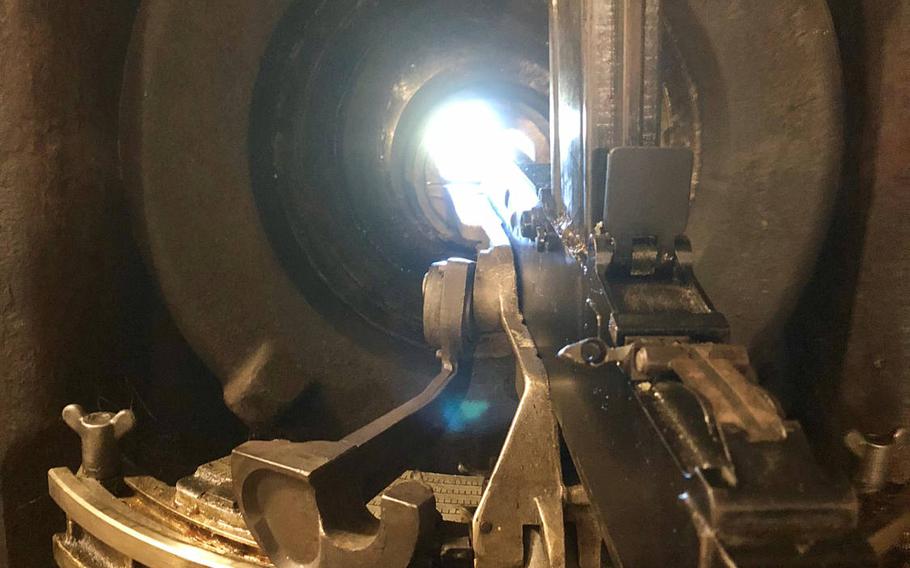 Buy Photo
A French FM 24/29 light machine gun in its embrasure at the Magnot Line f=fort of La Ferte. Much of the gear inside the facility remains original, little changed since it was occupied by the Germans in 1940. (Slobodan Lekic/Stars and Stripes) 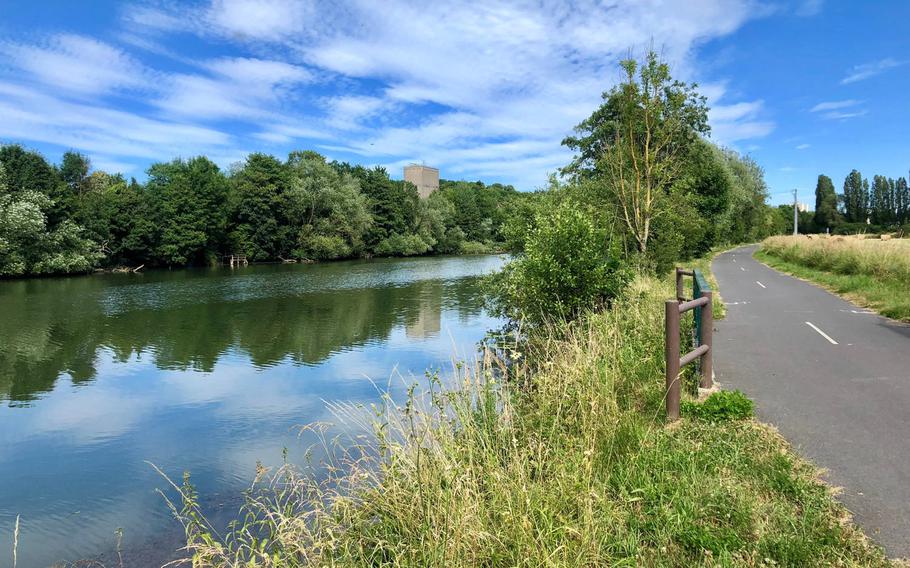 Buy Photo
The Meuse river on the outskirts of Sedan, where the elite Grossdeutchland regiment crossed the river in 1940 and broke the French defenses. The Germans used the Esperance textile mill on the north bank to organize the assault. (Slobodan Lekic/Stars and Stripes) 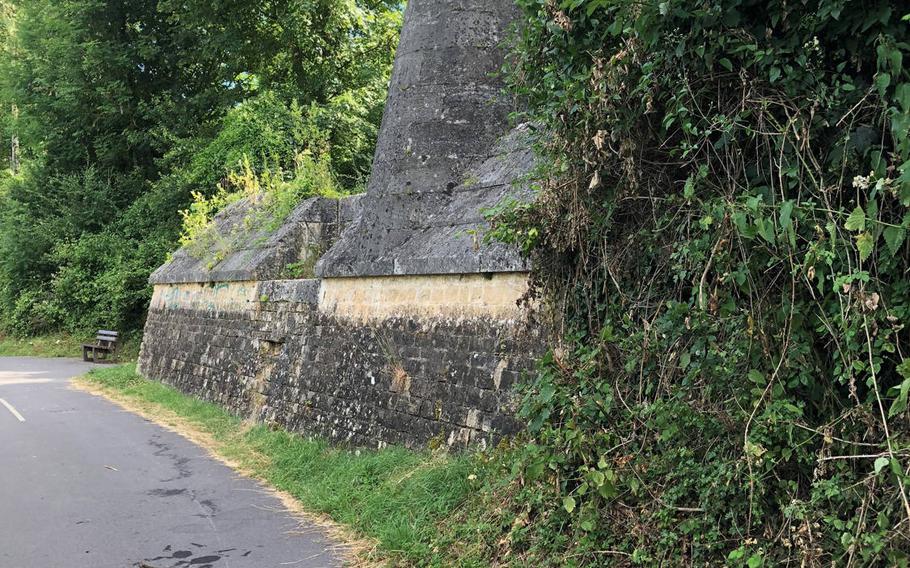 Buy Photo
A French bunker on the Meuse river on the outskirts of Sedan, where in 1940 German troops crossed the river under heavy fire and broke through the defensive line. The river-crossing was the first state of a Blitzkrieg offensive that took Nazi forces to the English Channel, cutting off a million British, French, Belgian and Dutch troops. (Slobodan Lekic/Stars and Stripes) 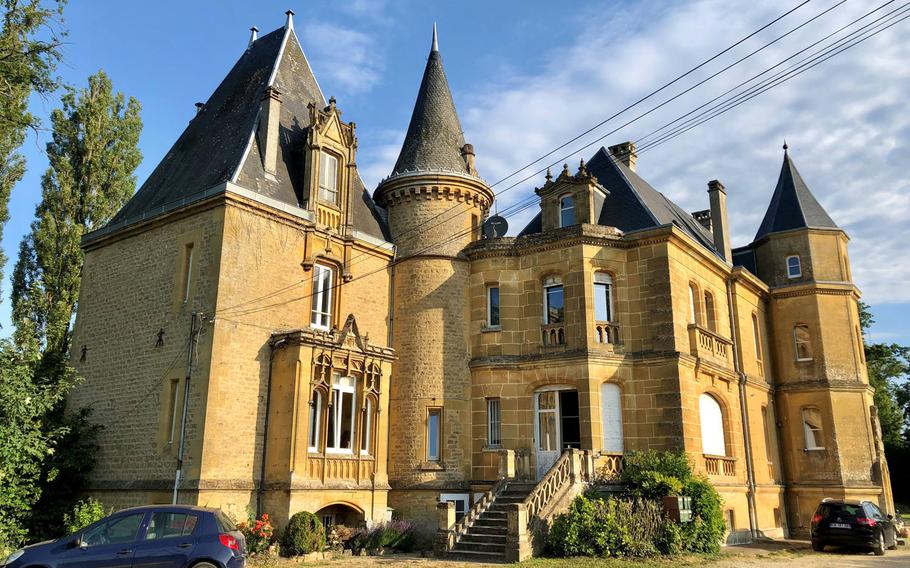 Buy Photo
The Chateau de Bellevue on the outskirts of Sedan, Where French Emperor Napoleon III surrendered to Kaiser William I, after the Battle of Sedan during the Franco-Prussian War. The French defeat led to the unification of Germany. (Slobodan Lekic/Stars and Stripes) 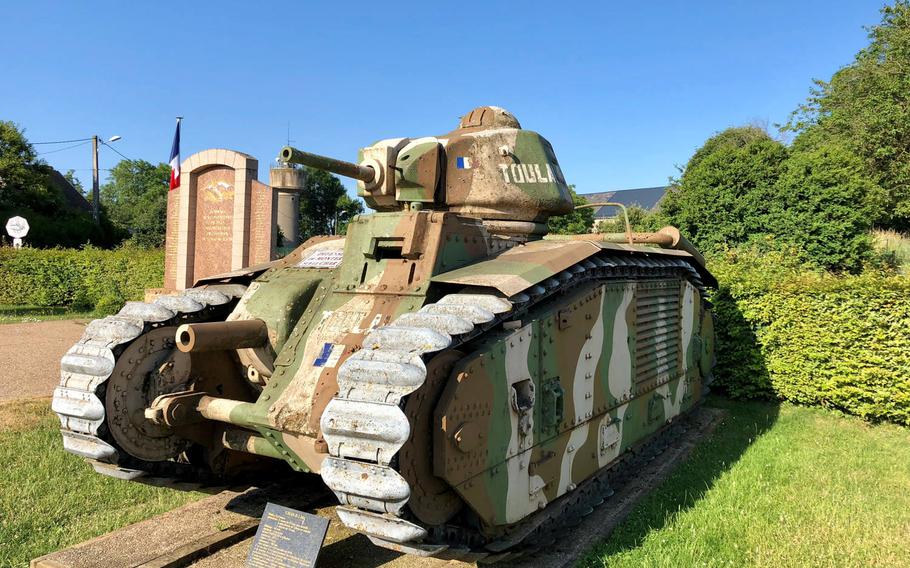 Buy Photo
A French Char B1 medium tank that took part in the Battle of Stonne, a failed atttempt by the French army to plug the gap created by the German breakthrough at Sedan. During the fighting, the village -- located about 12 miles south of Sedan -- changed hands 17 times. (Slobodan Lekic/Stars and Stripes) 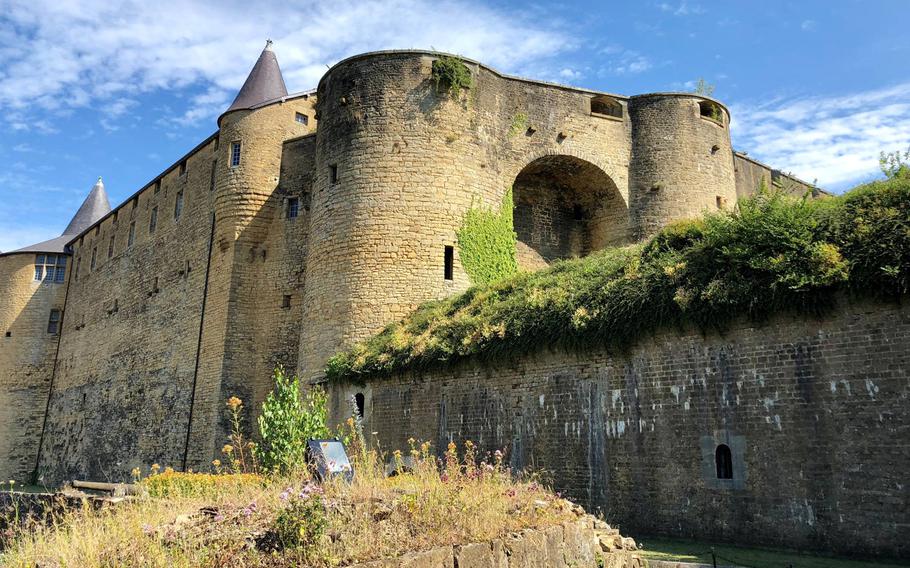 Buy Photo
Sedan Castle, one of the largest in Europe, sits on a hill smack in the middle of town of 17,000 people. A tour of the castle and its museum is highly recommended. (Slobodan Lekic/Stars and Stripes) 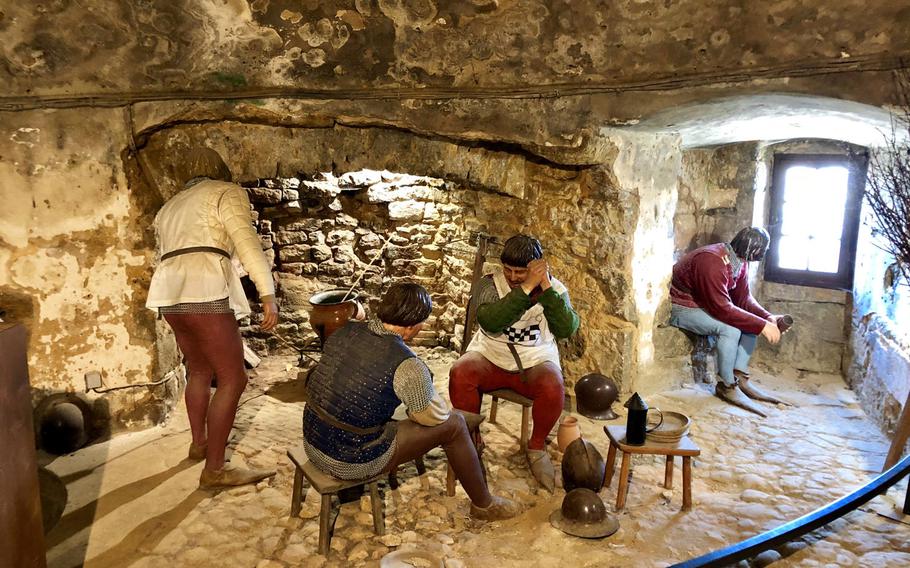 Buy Photo
A diorama inside Sedan Castle depicts the lives of ordinary soldiers in the garrison in the Middle Ages. (Slobodan Lekic/Stars and Stripes) 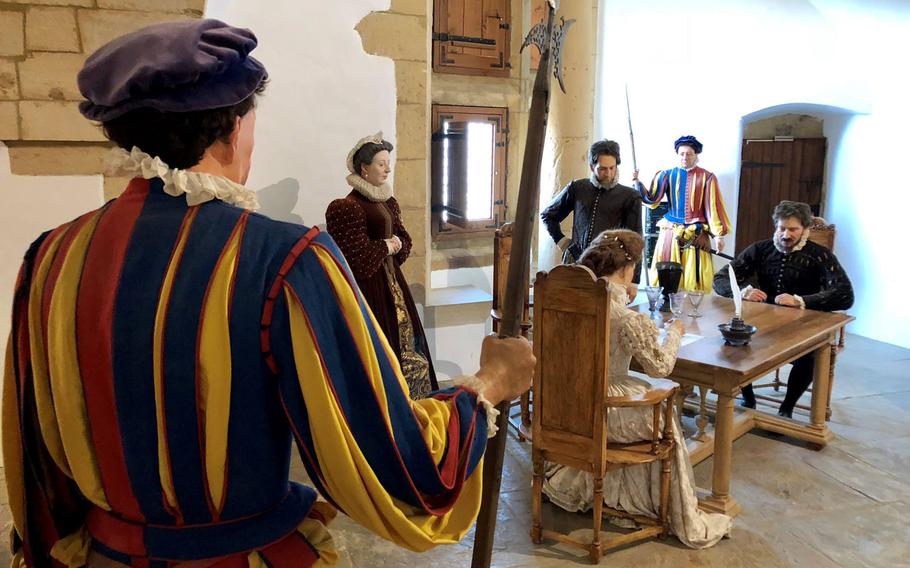 Buy Photo
Dioramas inside Sedan castle depict the lives of the gentry, common people and soldiers in during various time-periods. (Slobodan Lekic/Stars and Stripes) 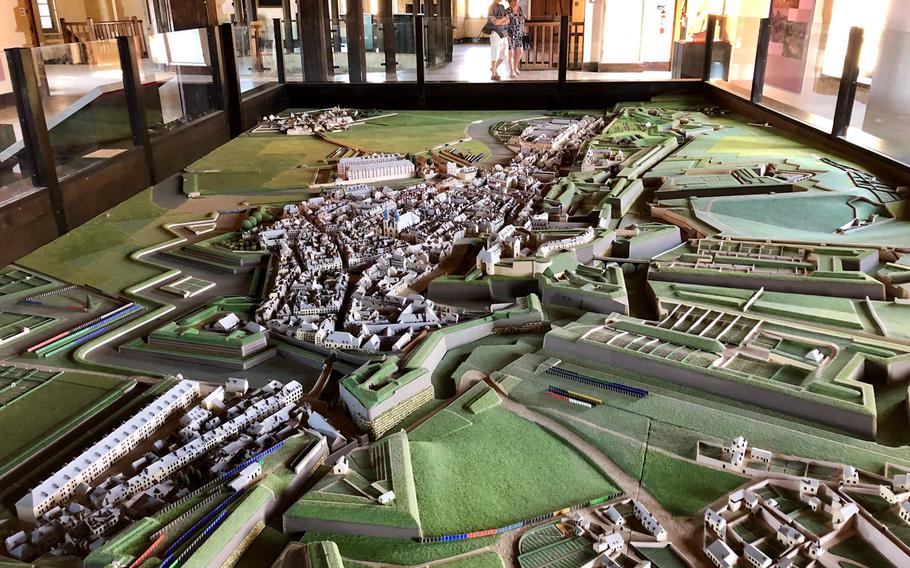 Buy Photo
A huge model of Sedan fortress in the 19th century is part of the muuseum in the center of the castle. A visit is highly recommended. (Slobodan Lekic/Stars and Stripes) 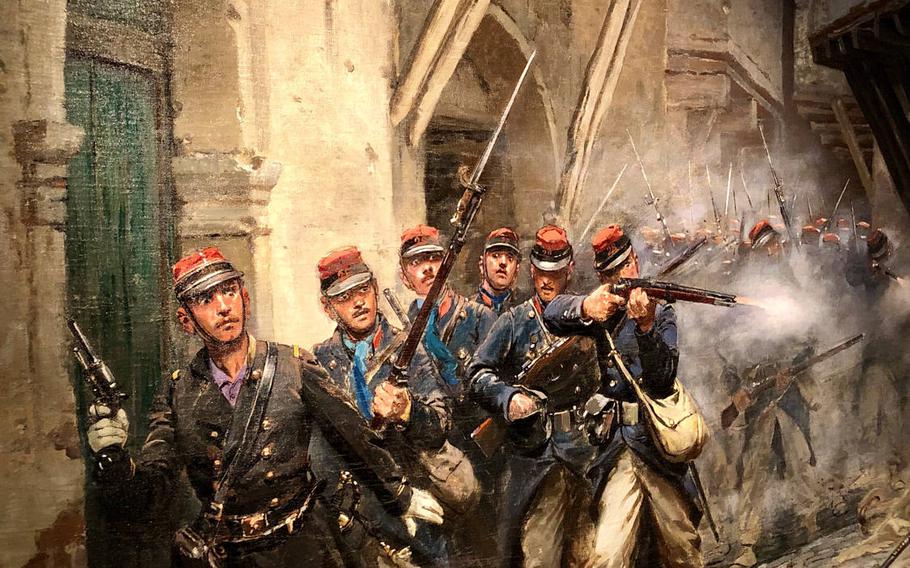 Buy Photo
A painting inside the museum of Sedan fortress depicts French naval infantry in action in the 19th century. (Slobodan Lekic/Stars and Stripes) 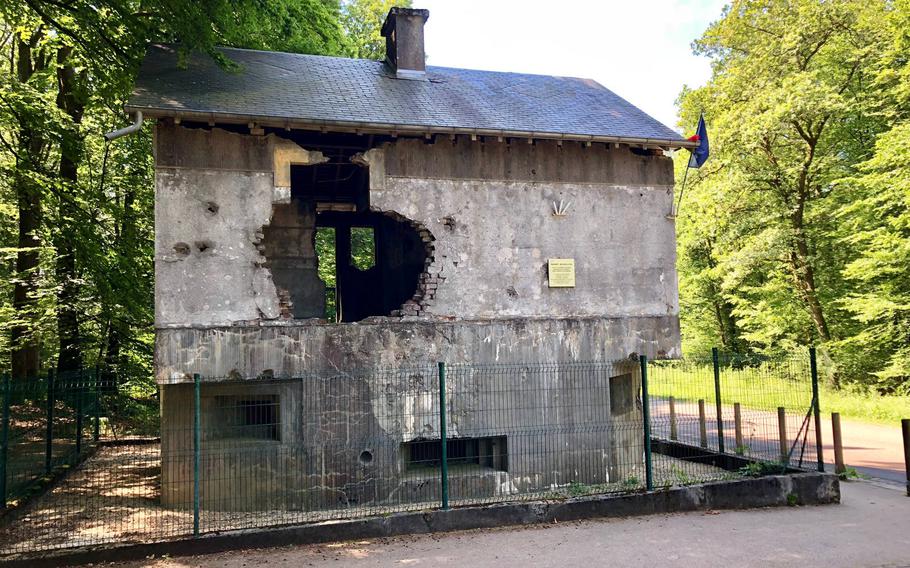 Buy Photo
A blockhouse in the Ardennes forest between Sedan and the nearby Belgian border. In 1940 French generals considered the Ardennes to be impassable for German tanks. A lieutenant and anti-tank 4 gunners died in the bunker trying to stop the German advance on May 10, 1940. (Slobodan Lekic/Stars and Stripes)

Although Sedan is somewhat removed from France’s main tourist routes, a visit to this industrial town near the Belgian border is a must for military history buffs.

It was in a little chateau on Sedan’s outskirts that the Franco-Prussian war ended.

There is no plaque marking the Chateau Bellevue, now a private residence on the side of a quiet country road. But this is where a dejected Napoleon III surrendered on Sept. 2, 1870, together with the fortress of Sedan and its 100,000-strong garrison.

The resounding Prussian victory resulted in the unification of Germany, changing the balance of power on the Continent and leaving Germany as the strongest nation in Europe.

This led to the creation of rival alliances that would eventually clash in World War I.

At the beginning of World War II, Sedan also found itself playing a key role in the struggle between the Allied armies and the German Wehrmacht.

Although WWII started in September 1939, there was initially little military action on the Western Front, where the French and British armies relied on the supposedly impregnable Maginot Line of fortifications along the German border to stop any Nazi attempt at a breakthrough.

But the German high command had adopted a bold new plan of attack, with the main thrust going through the Ardennes Forest in Luxembourg and Belgium.

The Ardennes were lightly defended because the Allies were convinced the hilly, heavily forested terrain could not be crossed by tanks. They left just two second-rate divisions composed of older reservists manning a handful of bunkers in the Sedan sector just past the northern end of the Maginot Line.

Only two days after launching the all-out offensive through the Ardennes on May 10, 1940, Gen. Heinz Guderian’s Panzer corps reached the Meuse river at Sedan with no sign of French opposition. On the morning of the 13th, a bombardment by 1,500 German aircraft paved the way for crossing the Meuse, with Hitler’s elite Grossdeutschland Panzer-Grenadier regiment leading the amphibious operation.

French machine-gunners, dazed by the aerial and artillery pounding, fought back and inflicted heavy casualties on the first wave of boats crossing the river. But they could only delay the inevitable.

Within a day, German armor streamed across a pontoon bridge into the heart of France, racing for the coast to encircle Allied forces in Belgium. The fate of France was sealed on May 20, when the German tanks reached the sea near Dunkirk.

The disaster at Sedan and the inability of the British and French allies to stop the German blitzkrieg set the course of WWII, until the eventual Allied invasions and liberation of Europe.

Today, the L’Esperance textile mill on the right bank of the Meuse, which Guderian used to mask preparations for the amphibious assault, is closed and abandoned.

On the left bank, the remains of the French bunkers are hidden in the thick undergrowth along a winding bike path just west of the city’s Pont Neuf bridge. A plaque explains the tactical situation during the decisive battle in English, French and German.

Another interesting site worth visiting is the village of Stonne, on a hill about 15 miles south of Sedan. There, French tanks attempted to regain the initiative during a three-day battle in which the village changed hands 17 times, with the Germans suffering heavy casualties.

Although the little Maginot Line fortification of La Ferte, about 12 miles south of Sedan, was not directly involved in any world-shaking events, no battlefield tour of the area would be complete without a visit.

The fort, the smallest and weakest, located at the end of the fortified line, was an afterthought built in the late 1930s to cover the border with Luxembourg and Belgium.

Left without artillery support from the other fortifications in May 1940, it was encircled and its fighting blocks were badly damaged. The entire 105-man garrison perished from carbon monoxide poisoning after they took shelter in a passageway deep beneath the ground.

The site is preserved as it was in 1940 and includes a memorial, small museum and a small cemetery where the defenders are buried. Unlike most Maginot Line forts, which were stripped by the Germans of most weapons and steel fittings later in the war, La Ferte was preserved during the occupation and shown off to foreign visitors to highlight the power of the German army.

Finally, a visit to the area must include a stop at the Chateau de Sedan, Europe’s largest medieval fortress. Towering above the center of town, the immense structure features a large museum with lifelike dioramas depicting the lives of the lords of the manor during the Middle Ages, along with ordinary folks and soldiers. A tour of the battlements offers excellent views of the area. There is also a section dedicated to the Franco-Prussian War, the only one in the immediate area dealing with 1870, with paintings of the key events.

The fortress also contains an excellent 4-star hotel for those wanting to spend a night or two in Sedan. A former barracks and warehouse, it was remodeled retaining some of the old walls and other features of the former building.