Baseball is a hit in Japan 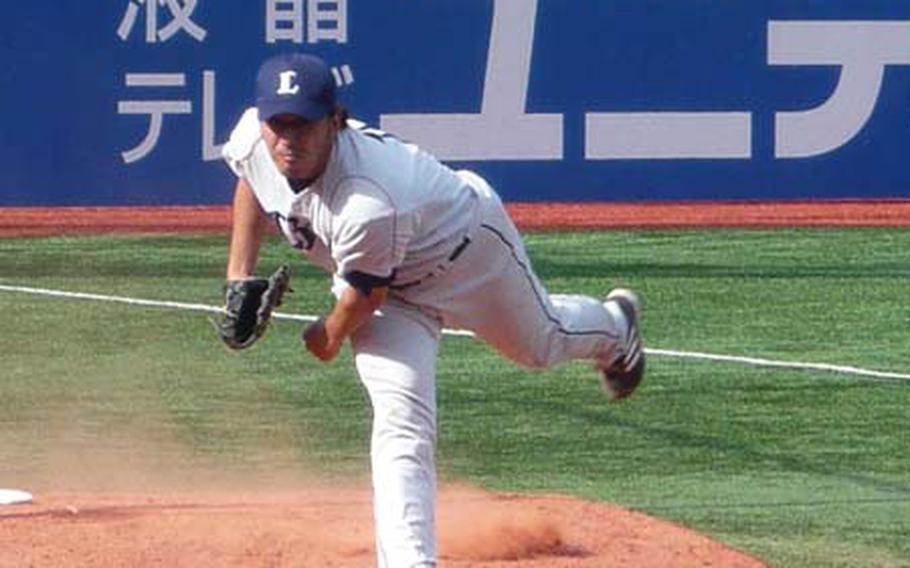 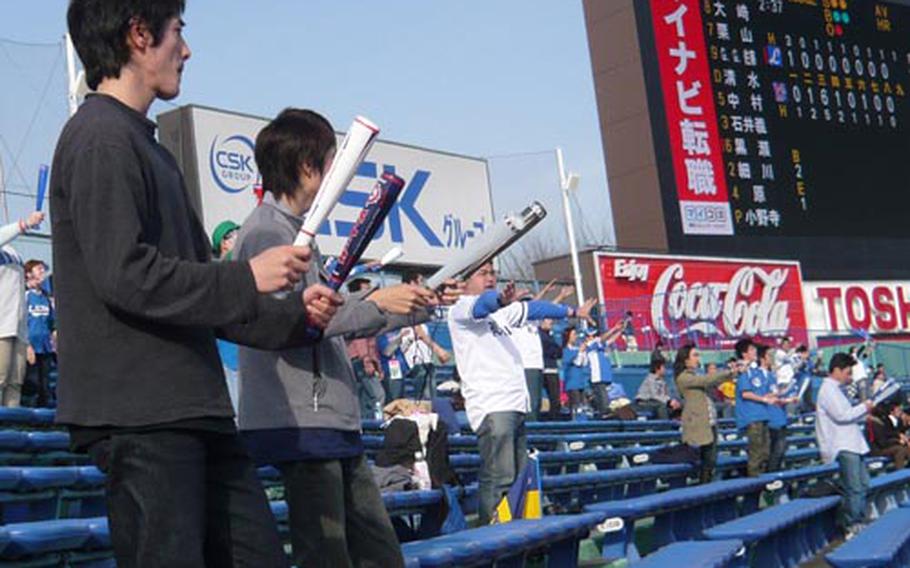 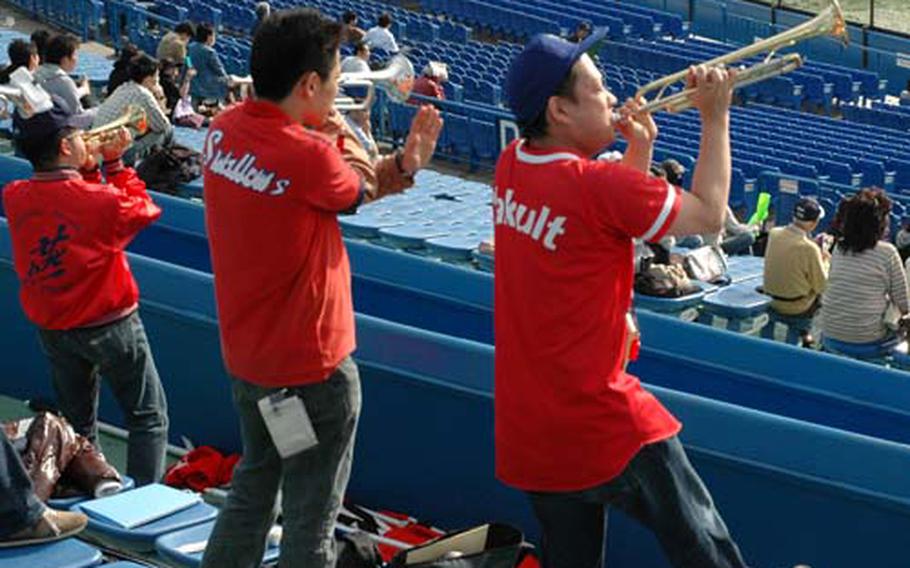 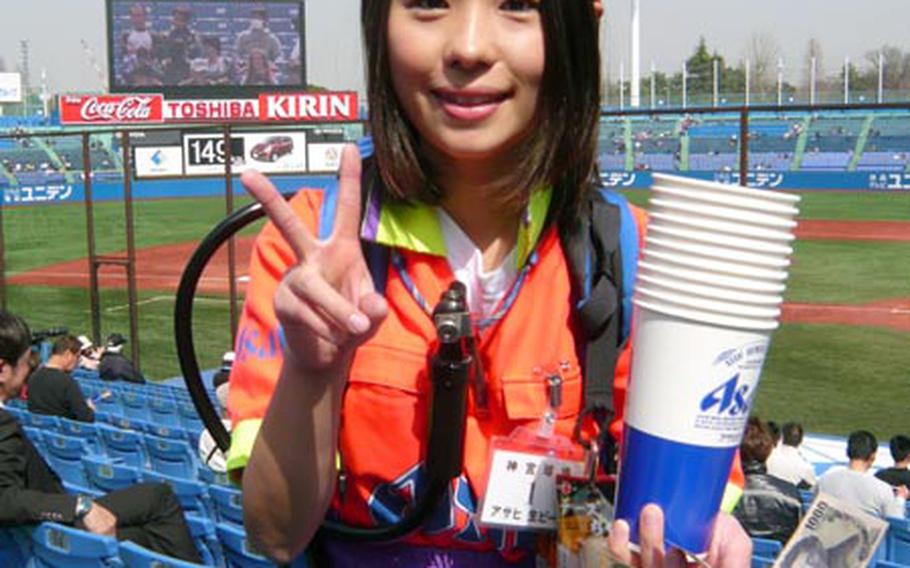 Vendors with beer kegs on their backs serve beer at Japanese baseball stadium like this girl at Jingu Stadium in Tokyo. (Hana Kusumoto / S&S) 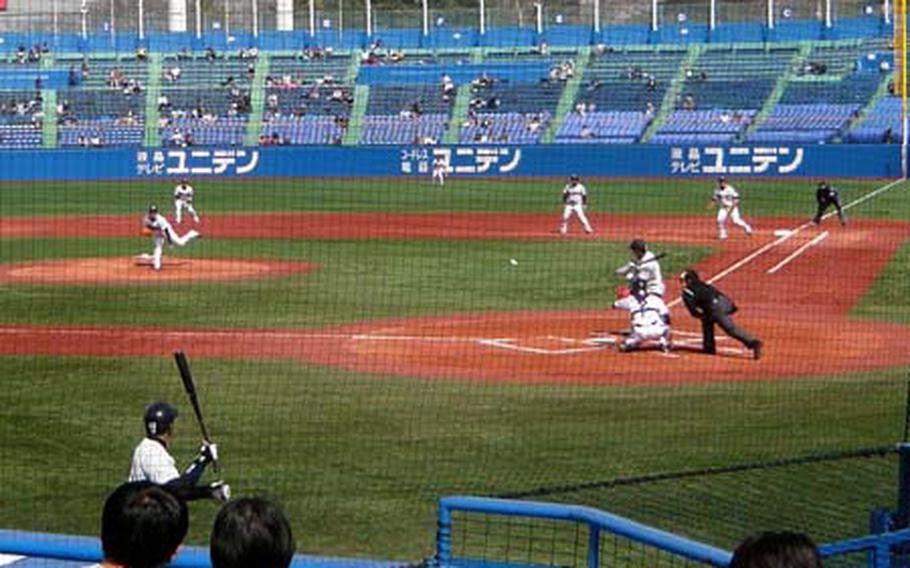 Beautiful sunshine and a comfortable breeze. &#8216;Tis the season to enjoy the outdoors. So, how about going to a ballpark in Japan?

The Japanese pro-league baseball season started April 3. It is a great chance to enjoy the familiar sport among Japanese fans. And sometimes it&#8217;s just as fun watching the fans as it is watching the action on the field. With their trumpets blaring and their flags waving, the spectators are a sight to behold.

The sport was introduced to Japan in the late 1800s by an American who came to the country to teach English. The professional league was established in 1934.

The quality of play doesn&#8217;t leave fans wanting, either. From Ichiro Suzuki to Daisuke Matsuzaka, Japan has produced many fine baseball players who currently play in the United States. But there are still a lot of great players in Japan.

My friends and I recently went to a preseason game at Tokyo&#8217;s Jingu stadium, home of the Yakult Swallows. The Swallows, which compete in the Central League, played the Pacific League&#8217;s Saitama Seibu Lions.

Preseason games are one of the few opportunities to watch teams of different leagues play.

Another chance is during regular season interleague games, a crowd-pleasing concept introduced in 2005. This year, the six teams from the Central League will play the six teams in the Pacific League from May 19 to June 23.

Baseball teams are located throughout Japan, many close to military bases. Near Yokota Air Base are the defending champion Saitama Seibu Lions, who are 13-time Japan Series winners.

Not too far from Misawa Air Base are the Tohoku Rakuten Golden Eagles of Sendai. Located in Kanagawa Prefecture, the Yokohama Bay Stars are the closest team to Yokosuka Naval Base, though nearby Tokyo hosts two squads &#8212; the Yomiuri Giants and Yakult Swallows. The Hiroshima Toyo Carp play near Marine Corps Air Station Iwakuni and Fukuoka Softbank Hawks are a short drive from Sasebo Naval Base.

The Giants are often compared to the New York Yankees. You either love them or hate them.

As is the case with most sports, going to a baseball game in Japan doesn&#8217;t require much language skill. Strike is "su-to-ra-i-ku" and out is "a-u-to." If you know the game of baseball, you&#8217;ll have no trouble following the game.

But there are some distinct differences at Japanese ballparks compared to what you find in the States.

As we arrived at the stadium, the first thing on our mind was filling ourselves with ballpark food and beer. Beer is always served cold, mostly by girls in uniform carrying kegs on their backs. You can&#8217;t beat the service.

Although there are hot dogs and popcorn, there&#8217;s also fried noodles and beef bowls for those looking for a Japanese twist on ballpark food.

The cheering in Japan also has its own flavor. Fans wait for their turns to cheer and do so loyally, no matter what the score. We sat behind home plate with the fans wearing their favorite players&#8217; jerseys and Swallows towels around their necks.

Then we noticed the fans in the outfield bleachers. Some were dressed in full uniform and armed with whistles to lead the fans in cheers. Others played trumpets and drums and sang in unison as players went up to bat. But as their team made three outs, they politely sat down. It was the other team&#8217;s turn to cheer. You&#8217;d never see that in the States.

Even though some key players were missing due to the World Baseball Classic, the game was exciting. We could hear players calling out fly balls and the sound of balls hitting the gloves.