Cheerleaders for the Doosan Bears perform during a game in Seoul. Professional baseball teams in South Korea have cheerleaders, unlike American teams. (Ashley Rowland/Stars and Stripes)

Cheerleaders for the Doosan Bears perform during a game in Seoul. Professional baseball teams in South Korea have cheerleaders, unlike American teams. (Ashley Rowland/Stars and Stripes) In this file photo from 2010, a vendor sells beer at Seoul's Jamsil Stadium during a South Korean professional baseball game between the Doosan Bears and the Samsung Lions. (Ashley Rowland/Stars and Stripes) 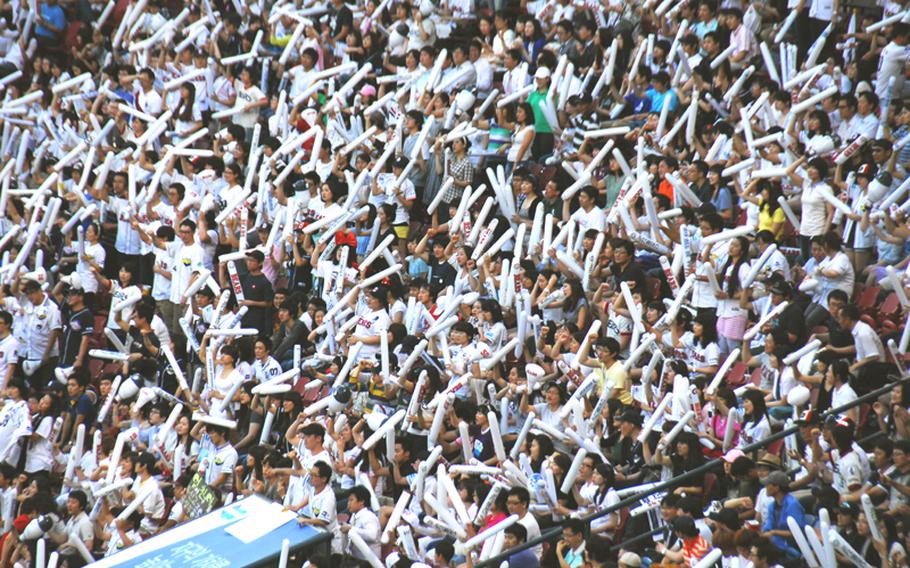 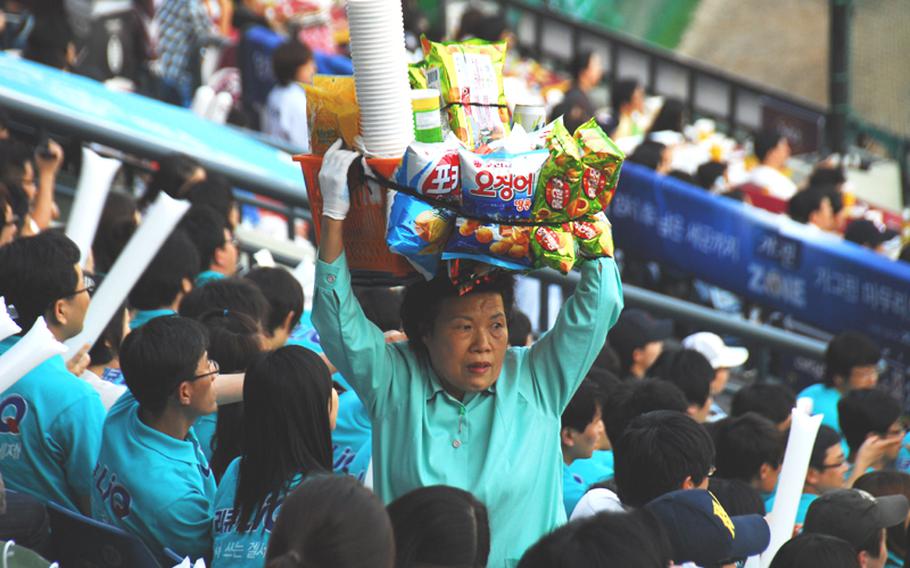 A vendor sells snacks and drinks during a professional baseball game at Seoul&#39;s Jamsil Stadium. (Ashley Rowland/Stars and Stripes) The scoreboard at Seoul&#39;s Jamsil Stadium. (Ashley Rowland/Stars and Stripes) 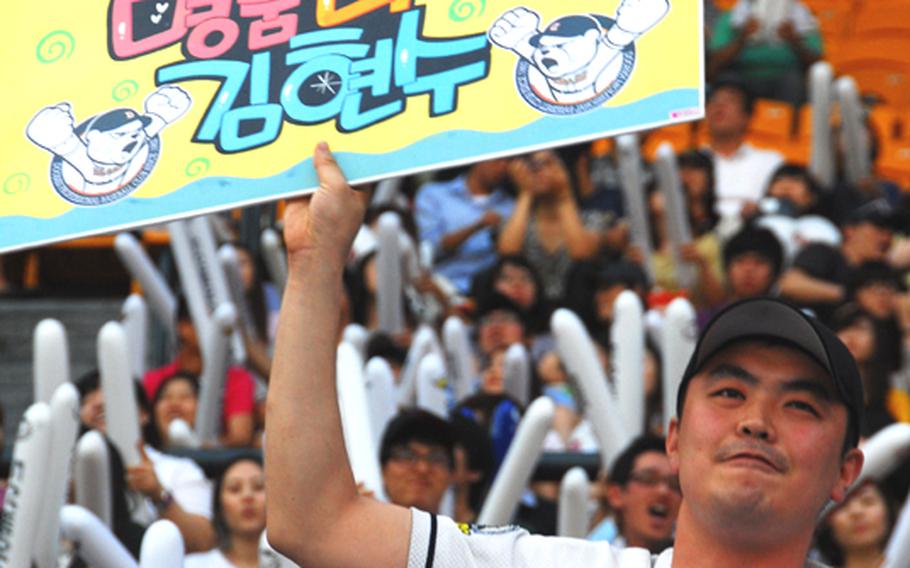 A Doosan Bears fan holds up a placard in support of player Kim Hyun-su. (Ashley Rowland/Stars and Stripes)

The first time I went to a baseball game in Seoul, I realized that half the crowd was watching the stands, not the field.

They weren&rsquo;t eyeing any bunts or fly balls, but rather the cheerleaders &mdash; impossibly slender women who, with their long legs, long hair and short skirts &mdash; are the real stars of the game, not the players. Each inning, men ogle and women watch enviously as the cheerleaders shimmy and shake their barely-there derri&egrave;res, feign taking off a shirt, or strike one of a number of dance moves too racy for the floors of most Seoul nightclubs.

Still, even if half the fans are watching the cheerleaders, the other half are watching the game. And even though you won&rsquo;t hear anybody singing &ldquo;Take Me Out to the Ballgame&rdquo; in South Korea, the crowds are at least as, if not more, spirited as those at any major league baseball game in the U.S.

From the moment you walk onto the grounds of the stadium, there&rsquo;s no mistaking it: You&rsquo;re not in Kansas &mdash; or Yankee Stadium or Wrigley Field or Fenway Park &mdash; anymore. Before you get to the ticket counter, you have to walk through a gantlet of a dozen or so virtually identical stands selling such snacks as kimbap, or rice rolls; dried squid; boiled eggs; beer; and soju, a cheap but potent Korean liquor.

Inside the stadium, there are a few other Asian twists.

Fans nosh on spicy rice cakes and dried squid instead of peanuts and Cracker Jack, though there are several KFCs and Burger Kings at the stadium. The beer flows just as freely as in American stadiums &mdash; perhaps a bit too freely, as some of the players sport what appear to be beer guts and look as if they might have trouble rounding the bases before the end of the inning.

The rules of professional baseball in South Korea are the same as in the U.S., though the skill level here is somewhere between Double-A and Triple-A.

Tickets are cheap at 8,000 won apiece &mdash; slightly less than $7 &mdash; for upper-deck seats, although you might find yourself standing or sitting on the stairs during a key game.

Buy a pair of thundersticks as you walk into the stadium for a few thousand won and beat them together as you cheer with the rest of the crowd &mdash; whether it&rsquo;s the cheerleaders or the team you&rsquo;re rooting for.

If you go: In Seoul, games are held at Jamsil Stadium (Sports Complex Station, Line 2) or Mokdong Stadium (Omokgyo Station, Line 5). Games usually start at 5 p.m. on weekends and 6:30 p.m. on weekdays. For an updated schedule in English, check the &ldquo;Activities&rdquo; section of www.korea4expats.com