Bar Sleuth: For those about to rock, Grafenwöhr bar is perfect spot 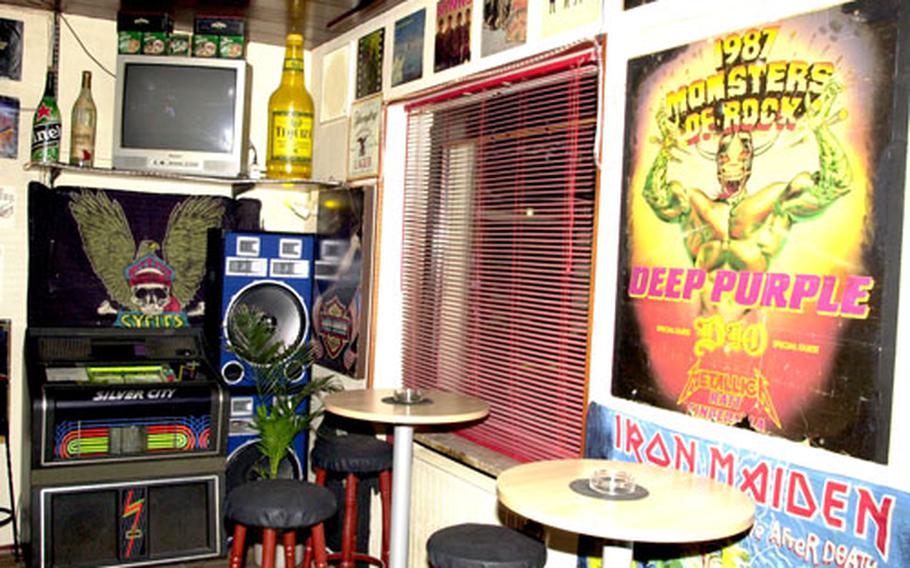 GRAFENW&#214;HR, Germany &#8212; Is your idea of a relaxing night out sitting in a smoke-filled room bashing your head against the bar to the thundering beat of AC/DC or Metallica? If it is, look no further than the first bar you encounter after walking out Gate 1 at Grafenw&#246;hr &#8212; the Classic Rock Cafe.

The bar has two pool tables and a table-soccer game, but it is the classic rock &#8212; or more accurately, classic metal &#8212; that is the real draw. On any given night, you can expect to be aurally assaulted by the likes of Motorhead, Iron Maiden, The Scorpions, Kiss, Ozzy Osbourne, Tool, Wasp, Guns N&#8217; Roses and an army of other heavy metal legends whose music is blasted over a sound system while videos play on a television in the corner.

The patrons include a mix of soldiers and civilians from Grafenw&#246;hr and German youngsters who have tired of the pop music forced on them elsewhere.

The long-haired German, whose black leather lace-up trousers make him look more like a rock star than a barman/computing student, says his name is short for Tankred and he actually rode in a German Leopard II tank when he served for two years as a private first class in the German army.

Tank will talk all night about metal.

The Classic Rock Cafe serves a variety of beers and liquors including The Wolfpack (7 euros), which is named for a U.S. Vietnam War-era unit and includes vodka, bourbon, gin, two shots of Captain Morgan&#8217;s rum, Coke and ice.

Classic Rock Cafe regular Robert Montour, 41, of Kahnawake, Canada, said he discovered the bar, then known as the Park Cafe, when he arrived at Grafenw&#246;hr as a staff sergeant assigned to the 535th Engineer Company in 1985.

Montour, who recently returned to work at the Grafenw&#246;hr shoppette, said the bar used to be popular with engineers who would drink a 10-mark ($5) concoction of liquors and sodas from the &#8220;Engineer Bucket.&#8221;

These days, the bar scene outside Gate 1 is not exactly humming. Bar owners are waiting for a resurgence in business they expect when a brigade-size element of soldiers arrives at Grafenw&#246;hr over the next two years, Tank said.

Until then, there&#8217;s always banging your head on the bar.