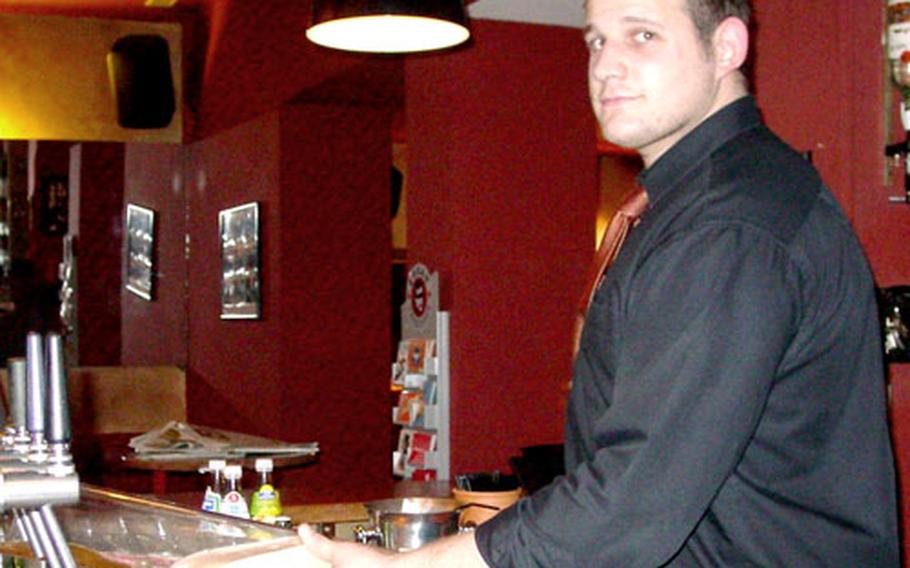 Bartender Dirk Specht serves up a “beer tower” at the Brauhaus am Markt in downtown Kaiserslautern. (Scott Schonauer / S&S)

KAISERSLAUTERN, Germany &#8212; There are many delightful breweries sprinkled across southern Germany, offering refreshing pale and dark beers admired by connoisseurs as the best in the world.

But few offer their brew in the formidable &#8220;beer tower&#8221; like the Brauhaus am Markt in downtown Kaiserslautern.

The meter-high plastic tube can hold as much as 5 liters and is popular among groups of friends anticipating a long night. At 21 euros, it is a bargain for thirsty beer lovers and guzzlers.

The brew tube isn&#8217;t the only reason people visit Kaiserslautern&#8217;s popular brewery adjacent to the city&#8217;s landmark 14th century Stiftkirche, the oldest church in the city. The Brauhaus includes a cafe, several eating areas that serve a full menu and a beer garden near the heart of the city&#8217;s pedestrian zone. German brewer Bischoff opened the establishment more than 10 years ago.

On weekends, Americans line up to enter the brewery&#8217;s club, the Markthalle, which used to be the site of the city&#8217;s indoor market years ago. The disco serves up drinks near the dance floor and on a catwalk.

The interior is modern, with tanks of beer overlooking an enclosed courtyard that leads to the club. Groups can get a special tour of how beer is made with a reservation and 3 euros per person. Tasting is included in the price.

The menus are in English and the waiters and waitresses speak fluent English, but German food is the specialty.

The brewery offers its own stout, wheat, a pale ale and special beer of the season. Bottled beer is also available. Bischoff, of course. Other house specialties include beer brandy and beer liquor.

Breakfast, lunch and dinner are available. The brewery&#8217;s breakfast includes a cup of coffee, a slice of ham, cheese and sausage platter, bread rolls or soft pretzel and 0.3 liters of beer for 7.90 euros.

While Americans often frequent the brewery on weekends, soccer fans overrun the spot when the city&#8217;s team plays at nearby Fritz-Walter stadium. Many of the star players from the team, nicknamed the Red Devils, often hit the Brauhaus after games.

The brewery is anticipating more customers during the World Cup this summer in Germany. Rotberg said managers plan to add more than 50 people to the staff to keep up with the demand and operate a large beer tent outside.

They&#8217;ll probably have to invest in more beer towers, too.

Drinks: Offers pale, stout, wheat and beer of the season from 1.90 to 5 euros. Taste test them all for 3 euros. German red and white wines. Beer towers cost 16 euros for 3 liters and 21 euros for 5 liters. A 10-liter keg costs 45 euros. Pitcher of Coke or Sprite costs 7.50 euros.

Food: Serves breakfast, lunch and dinner. Brunch on Sundays, from 10 a.m. to 2 p.m. Typical German food with bratwurst and schnitzel. There are daily specials posted.

Ambiance: A mix of Americans and Germans. Americans flock to the club on the weekends. It&#8217;s a popular spot for soccer fans before and after games. On warm weekends, it is difficult to find a table outside for lunch. The interior is modern, but the cafe will soon get a makeover and will be finished in time for the World Cup.