Bamberg: Push your bicycle to new heights on the hills 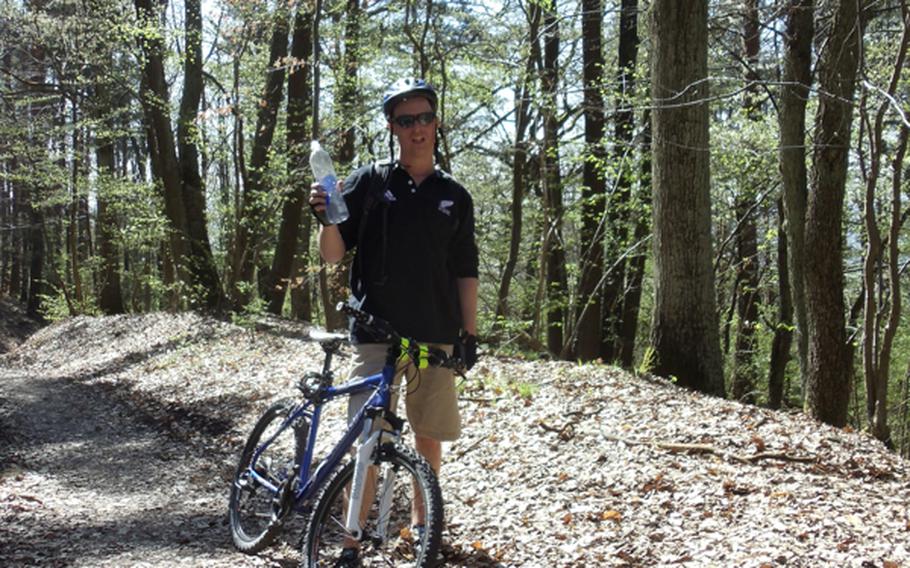 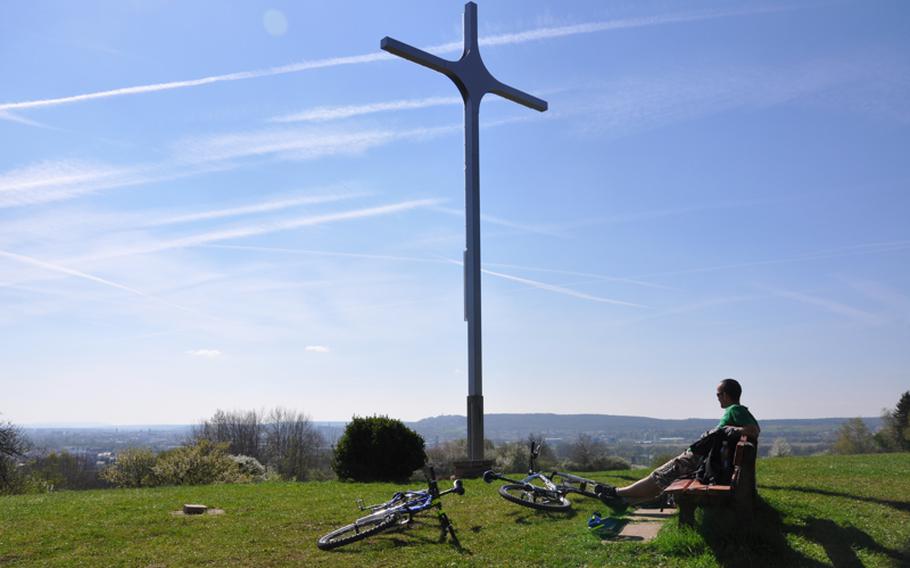 Buy Photo
Marcus Gaylor, a native of New Zealand, takes a break from a recent mountain bike trip to view the city of Bamberg from the top of a nearby hill. There are many tourist sites in this part of Germany, but a lot of the smaller ones can be missed by drivers racing down the autobahn. (Dan Blottenberger/Stars and Stripes) 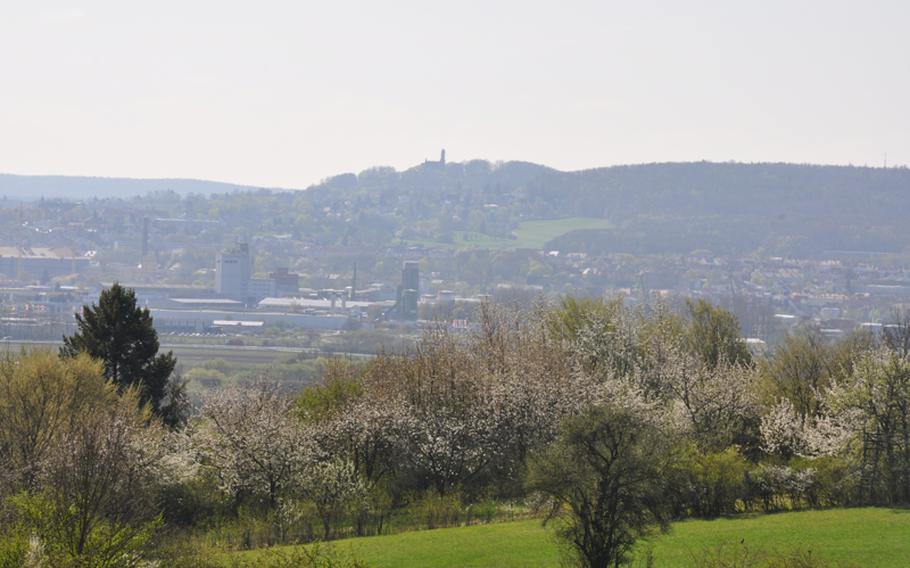 Buy Photo
The city of Bamberg, topped by Altenburg castle, can be seen from the Kreuzberg hillside outside the city. The hills are frequented by local bikers and easy to reach from the city. (Dan Blottenberger/Stars and Stripes) 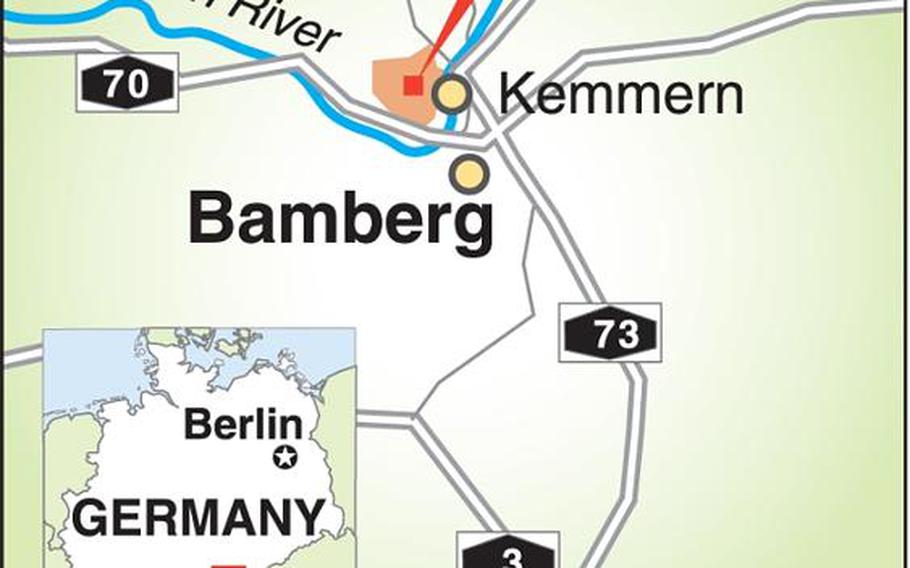 Have you seen Bamberg, Germany, from a mountain biker&rsquo;s point of view? If not, it is worth a trip to Kreuzberg, a series of hills between the towns of Hallstadt, Kemmern and Baunach on the rural outskirts of the city.

You can begin your climb into the hills after an approximately 15-minute bike ride from Bamberg&rsquo;s Warner Barracks. The view is magnificent as the entire city can be seen at certain points, with the Bamberg cathedral rising from the center and the Altenburg castle perched atop the tallest of the city&rsquo;s seven hills.

I took an extreme-sport-loving New Zealander with me on my trip. We left the city early in the morning and once I realized that my rambunctious partner brought along a helmet, I knew we were in for some serious natural trails.

Changing elevations drastically while riding a bike is not easy for a journalist who spent the winter in hibernation. On several inclines I found myself walking my bike uphill.

We were only an hour into our ride (which seemed to be all uphill) when I was completely out of breath and bleeding from scratches on my legs. But my fun was not complete. On one of our first downhills I caught a glimpse of a tree root a split second before my front wheel struck it, sending me soaring over the handle bar and skidding to a halt in some Franconian mud. My bike was a pretzel-like mess underneath my already exhausted and bruised legs.

&ldquo;It was bound to happen,&rdquo; was the only thing my comrade could say after returning to make sure I was still breathing. &ldquo;Did you break anything?&rdquo;

Everything was intact except my pride, which was shattered from trying to keep up with the seasoned mountain veteran.

In some locations we had to hunt for the best off-road trails by checking out other bike tracks that will lead down to some of the more demanding paths. When my friend would ask, &ldquo;Should we go for it?&rdquo; I would answer grudgingly, &ldquo;Yeah, why not.&rdquo;

Then as we zoomed down the mountain, I found myself clenching the grips to avoid wiping out and steadily tapping the brakes so I wouldn&rsquo;t lose control on loose rock and gravel.

Fortunately, there was more than just cycling on this trip. We were able to view hidden landmarks such as crosses and religious sculptures that are tucked away in the hills, yet somehow remain remarkably clean.

And since we had no real destination, a beer garden seemed like a logical place to stop. As we made our way down the mountain into Kemmern, we stopped for lunch and beverages in the sun to refuel ourselves before heading back on a more level path.

The trip enticed me to buy a bike map to help locate biking trails throughout Bamberg and its neighboring towns. I would say 90 percent of the towns and tourist sites in the area can be reached by bicycle, including St. Michael&rsquo;s Cathedral in Bamberg, Castle Weissenstein in Pommersfelden and the trails around Heiligenstadt in Oberfranken.

And there is almost always a beer garden not far from any destination.

On the QTDIRECTIONSOne of the many access points for Kreuzberg is northwest of the town of Hallstadt &mdash; just north of Bamberg on Route 4 &mdash; across the Main River in the village of D&ouml;rfleins. There are also points of entry in Kemmern, Baunach and Oberhaid. When you are on Kreuzberg, there are signs at intersections in the hills that show the direction and distance to the nearest town.

COSTSBiking is free as long as you already have a bike and all the necessary safety equipment. There is no fee for using the trails.

FOOD & DRINKBring lots of water and snacks just in case you do not reach your destination when you expect to. There are several beer gardens and restaurants at the lower altitudes of the hills near villages and towns.

INFORMATIONIt&rsquo;s helpful to buy a local map. Most trails have signs with maps of important locations along the trails to check out.View available biking trails all over Europe at GPS.tour.info or www.bikemap.net.