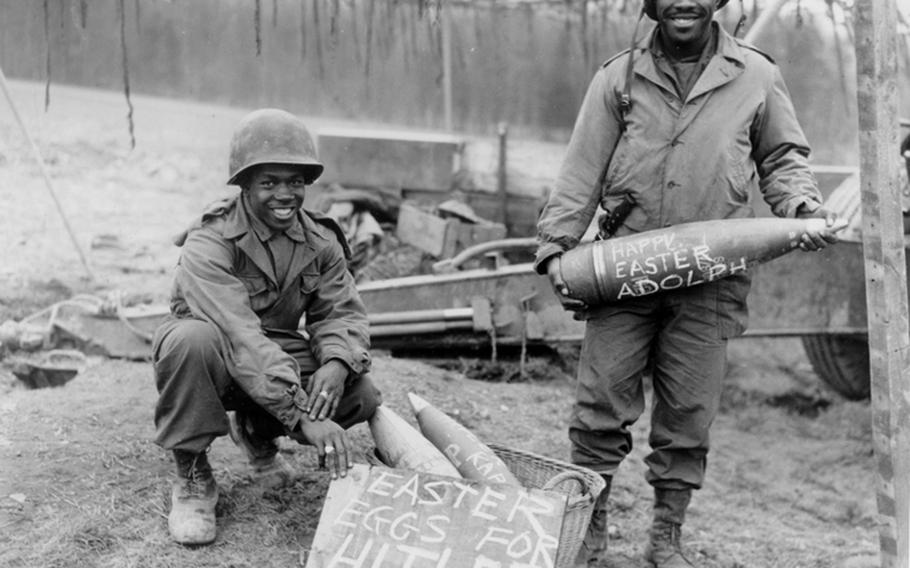 Cpl. William E. Thomas and Pfc. Joseph Jackson prepare a surprise for German troops on Easter morning, 1945. The life of black soldiers in Germany during and after World War II is the subject of a new book, 'A Breath of Freedom: The Civil Rights Struggle, African American GIs, and Germany.' (Photo courtesy of the National Archives)

Cpl. William E. Thomas and Pfc. Joseph Jackson prepare a surprise for German troops on Easter morning, 1945. The life of black soldiers in Germany during and after World War II is the subject of a new book, 'A Breath of Freedom: The Civil Rights Struggle, African American GIs, and Germany.' (Photo courtesy of the National Archives) 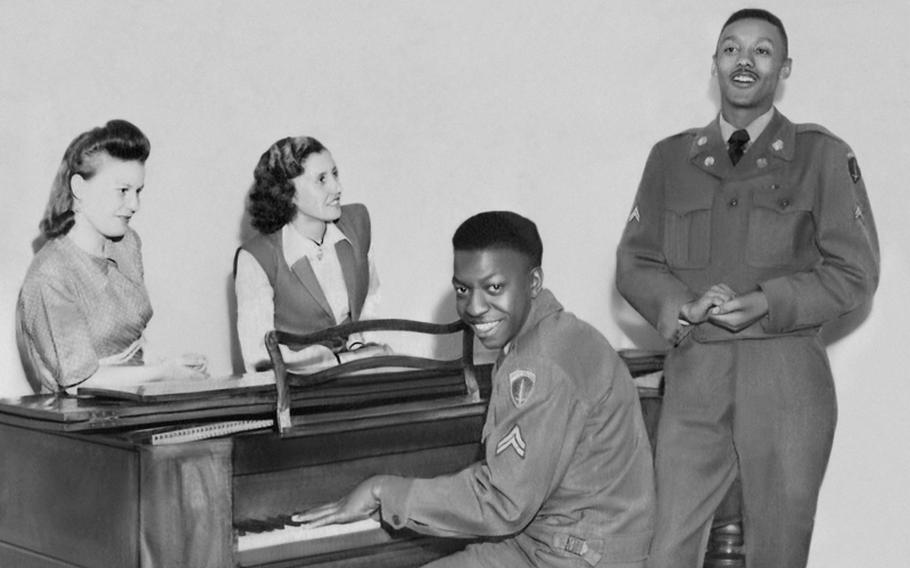 Irmgard Achatz from Kollbach, Germany, center, and one of her friends listen as her future husband, James W. Tanner of Philadelphia, sings while accompanied on piano by a fellow soldier. The life of black soldiers in Germany during and after World War II is the subject of a new book, 'A Breath of Freedom: The Civil Rights Struggle, African American GIs, and Germany.' (Photo courtesy of Debra Abell)

Germany lay defeated and in ruins, responsible for the recent murder of millions and a world war. Yet it also became an unlikely haven for some soldiers.

&ldquo;For black GIs, especially those out of the South, Germany was a breath of freedom,&rdquo; Colin Powell, a former secretary of state, chairman of the Joint Chiefs of Staff, and America&rsquo;s most famous African-American soldier, noted in his memoir.

&ldquo;They could go where they wanted, eat what they wanted and date whom they wanted. The dollar was strong, the beer good and the German people friendly. ...&rdquo;

Many vowed to &ldquo;never go back&rdquo; to the old ways.

The occupation of Germany provided black GIs personal liberation. But it also had a monumental effect on the armed forces and, ultimately, U.S. society, according to a book by two German historians published in October.

The book &mdash; &ldquo;A Breath of Freedom: The Civil Rights Struggle, African American GIs, and Germany&rdquo; &mdash; argues that the black servicemembers&rsquo; time in Germany helped desegregate the armed forces, and was central to the civil rights movement in America.

It wasn&rsquo;t because the Germans were enlightened, according to authors Maria H&ouml;hn of Vassar College in New York and Martin Klimke of the German Historical Institute in Washington, D.C. &ldquo;On the contrary, racism towards people of color has a long history in Germany,&rdquo; they write.

It was because the treatment of black people in much of the U.S. and its military was so much worse, they say.

State and local Jim Crow laws segregating blacks and relegating them to inferior status had been in force in Southern states since shortly after the Civil War. Lynchings by white mobs murdered thousands of African-Americans from the end of the Civil War through the 1930s, and went unpunished.

The military of the 1940s capped black troop strength at 10 percent, assigned black soldiers primarily to non-combat units performing menial duties and put white officers, often as a punishment, in charge of them. Even blood banks were separated by race, according to a study of integration of the armed forces prepared for the Army&rsquo;s Center of Military History.

All that became far more visible to the world when the U.S. Army arrived in Germany.

&ldquo;By bringing a segregated army to bases across Western Europe, the United States literally transported its racial conflict and the actors in that conflict onto foreign soil,&rdquo; H&ouml;hn and Klimke write.

&ldquo;It was during the post-war occupation of defeated Nazi Germany and in Cold War West Germany that the contradictions between America&rsquo;s claim to be the leader of the &lsquo;Free World&rsquo; and its own institutionalized racism became painfully apparent to the global community.&rdquo;

USAREUR units remained segregated until 1954 despite a 1948 executive order to integrate by President Harry S. Truman.

But the defeated Germans had in many cases welcomed black GIs, extending the same friendship and respect as they did to white ones. Many German women dated black American soldiers, with parental approval, a situation unthinkable then in most parts of the U.S.

A black soldier on a date with a white German woman might very well engender disapproving stares from both Germans and white soldiers, H&ouml;hn said in a recent interview in Heidelberg.

&ldquo;But nobody attacked them, nobody dragged them out to be lynched,&rdquo; she said. &ldquo;That, to the soldiers, was tremendous liberation.&rdquo;

The war had also caused some white soldiers to examine their own racial beliefs, the book says, in light of Nazi racial policies and American white supremacy. A black man&rsquo;s life in the U.S. had given him &ldquo;very little to fight for,&rdquo; said one officer, Lt. Col. John Stanton. And when one soldier asked him why the U.S. was fighting Adolf Hitler for treating Jews the same way blacks were treated at home, Stanton said, &ldquo;I could not find an adequate answer in an Army regulation or handbook.&rdquo;

The book begins with official U.S. attitudes toward black soldiers in World War I and details the struggle up until the 1970s, when commissions found that blacks were still treated unfairly by a variety of measures, including promotions and the military justice system.

It is filled with surprises. For example, black soldiers and German university students formed a brief partnership, and a rally of some 700 black soldiers and hundreds of students to protest the Army&rsquo;s treatment of blacks took place at Heidelberg University on July 4, 1970.

The USAREUR commander from 1967 to 1971, Gen. James H. Polk &mdash; a Texan who&rsquo;d served in the horse cavalry &mdash; was reputedly a man so racist &ldquo;his own chief of staff called the NAACP on him,&rdquo; according to one black officer&rsquo;s published memoir.

Soldiers weren&rsquo;t the only ones to benefit from the occupation, H&ouml;hn said. The nexus between U.S. troops and Germans helped both. For example, the Americans &mdash; black and white &mdash; also had a liberating effect on what was a rigid, hierarchical German society, she said.

To the vanquished Germans, the Americans seemed like movie stars, she said. They had money. They joked around. They slouched in their chairs &mdash; &ldquo;Instead of being so uptight always,&rdquo; she said.

&ldquo;It was just a different way of being in the world,&rdquo; H&ouml;hn said, &ldquo;and people loved it.&rdquo;