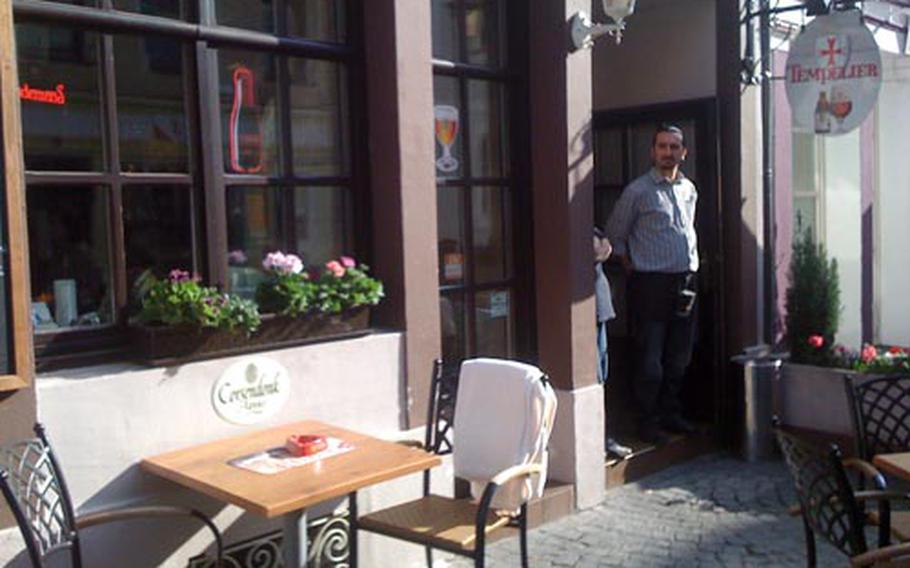 Ciran Kaygun, a 29-year-old college student who has been serving beer at Tempelier in Saarbrücken, Germany, for three years, looks out at the outdoor patio, an easy place to lounge while drinking the heart right out of a fine spring afternoon. (Seth Robbins/S&S)

German beer, while delicious, can at times seem redundant, with brewers advertising their adherence to recipes that date to purity laws created in 1516.

Belgian brewers, bound by no such laws, have gone the opposite route, mixing their beers with fruits and spiking the alcohol content to levels that can approach, or even exceed, that of wine.

Though it&rsquo;s hard to find Belgian beers in much of Germany &mdash; few are sold in supermarkets or restaurants &mdash; the pub Tempelier, in Saarbr&uuml;cken&rsquo;s St. Johannes Markt, specializes in the beers of Germany&rsquo;s neighbor to the west.

The bar also serves other Belgian fare &mdash; such as waffles, fries and mussels &mdash; But it&rsquo;s the 30 different beers, some from tap and each with a unique glass, that make Tempelier a must stop on any imbiber&rsquo;s itinerary.

"Each beer has a history," said Ciran Kaygun, a 29-year-old college student who has been serving beer at Tempelier for three years.

For example, there is the Kwak glass, which has a distinctive hourglass shape and must be holstered in a wooden stand to keep it from tipping.

According to the brewers of Kwak, the glass was invented in the 1800s by innkeeper Pauwel Kwak after he discovered that the mail coachmen who stopped at his inn were going thirsty because they could not leave their horses to come in for a quick drink. Kwak had a glass blown that could be hung on the coach, and the first beer to-go was born.

Though the stated history of the Kwak glass may be dubious, there is no mistaking the deliciousness of the rich, amber liquid inside.

The Trappist beers on Tempelier&rsquo;s menu also have an interesting provenance. These are brewed by monks and nuns known as Trappists, who date back to a 17th-century reform movement in the Cistercian monastery of La Trappe, France. The movement spread throughout Europe, and like many monastic orders, the Trappists began brewing beer to earn income for their monasteries.

Now there are six Trappist beers from Belgium: Orval, Chimay, Westvleteren, Rochefort, Westmalle and Achel. All are ales, and several can be ordered at Tempelier, such as Chimay Blue, which is dark-brown and packs an alcohol content of about 9 percent.

Though blasphemous to many beer purists, the fruit beers of Belgium are also a big part of Tempelier&rsquo;s menu. Lindemans Kriek, a cherry beer, poured crimson from the tap, is fresh and sweet. Bottled beers include flavorings with apples, mangoes and mirabelle, small European plums.

Tempelier is often crowded in the late evenings with students from the nearby university, so it helps to come early. Or, you can lounge on the streetside patio and drink the heart out of a fine spring afternoon.

By the end of the day, you will likely be seeing little pink elephants &mdash; or it might just be that you ordered a Delirium Tremens, which boasts an alcohol content of about 9 percent and pachyderms on the bottle.

TempelierLocation: Saarbr&uuml;cken, GermanyDirections: Tempelier is in the heart of Saarbr&uuml;cken&rsquo;s pedestrian district, in the St. Johannes Markt. From Baumholder, take Autobahn 62 toward A6/Kaiserslautern Pirmasens and merge onto A6 toward Saarbr&uuml;cken. Follow signs toward the city center. Park anywhere near the pedestrian district and head for the main square; you will know you are there when you see a large fountain. Tempelier is right next to the fountain, down a nearby alley. Saarbr&uuml;cken also has a large train station, making it easy to get there by train.Hours: Open daily from 11:30 a.m.Specialties: Belgian beerEnglish menu: No. But the menu is pretty self-explanatory, and the waiters can usually help you.Prices: Beers range from 2 to 5 euros. The most expensive meal is mussels at 11 euros. Snacks include Flamk&uuml;chen, french fries for 3 to 5 euros, and waffles that start at 2 euros.Dress: CasualClientele: Students and other foreign nationalistsPhone: 0681-9104267Web site:www.tempelier.de, in German.