After Hours: Sea Side Jet City Burgers on Okinawa The walls of Sea Side Jet City Burgers display the restaurant's extensive menu. Located across from Araha Beach on Okinawa, it is a five-minute drive from Camp Foster. (Matt Orr/Stars and Stripes)

The walls of Sea Side Jet City Burgers display the restaurant's extensive menu. Located across from Araha Beach on Okinawa, it is a five-minute drive from Camp Foster. (Matt Orr/Stars and Stripes) 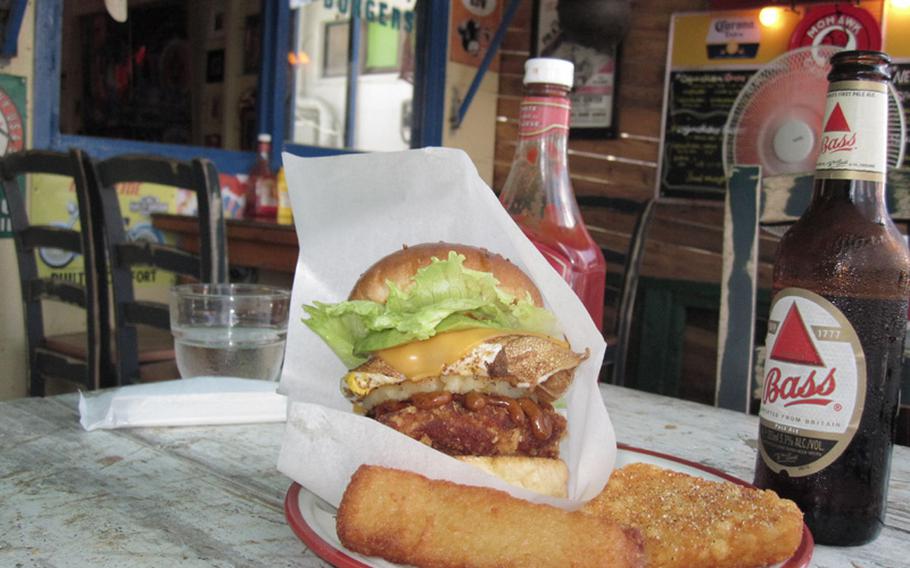 My Chicken 'Karate' Burger was so big that I made quite the mess eating it. But it was a great burger and is by far the best I have had on Okinawa. (Matt Orr/Stars and Stripes) 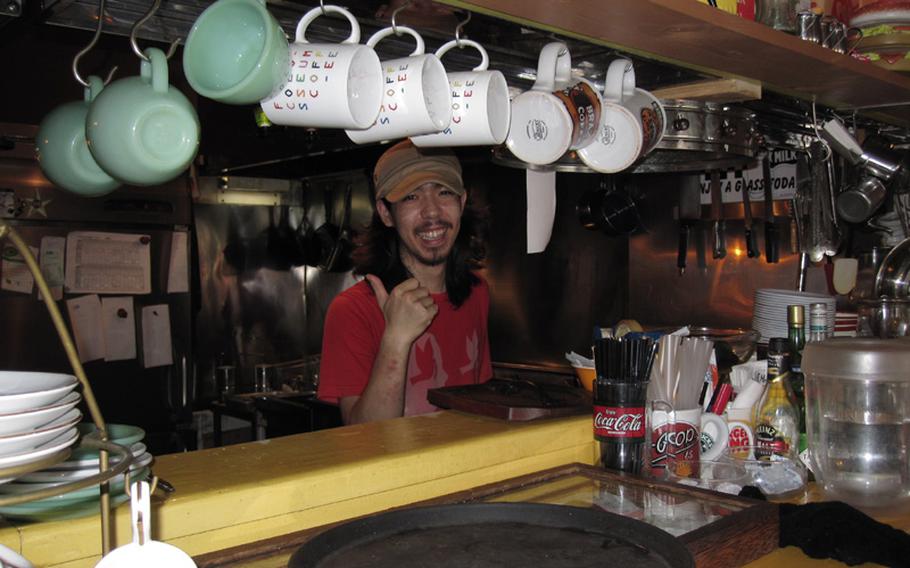 Chef Katsu Taminato works behind the grill whipping up burgers for the hungry patrons of Okinawa's Sea Side Jet City Burgers. (Matt Orr/Stars and Stripes) Vintage signs and other Americana memorabilia cover the walls and shelves of Sea Side Jet City Burgers on Okinawa. (Matt Orr/Stars and Stripes) 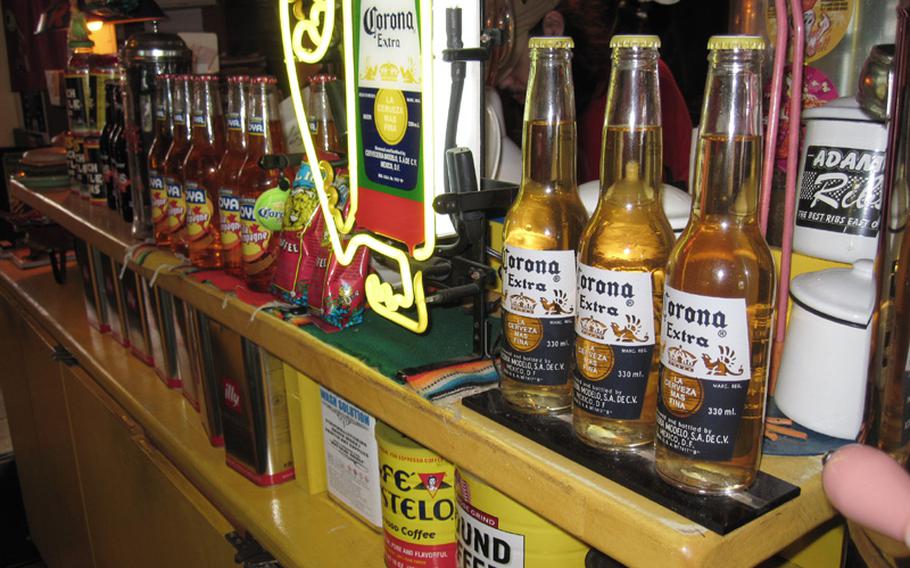 Bottles of Corona and various other imported beers are displayed on the shelves at Okinawa's Sea Side Jet City Burgers, lending to the feeling that you have walked into a diner in America. (Matt Orr/Stars and Stripes) 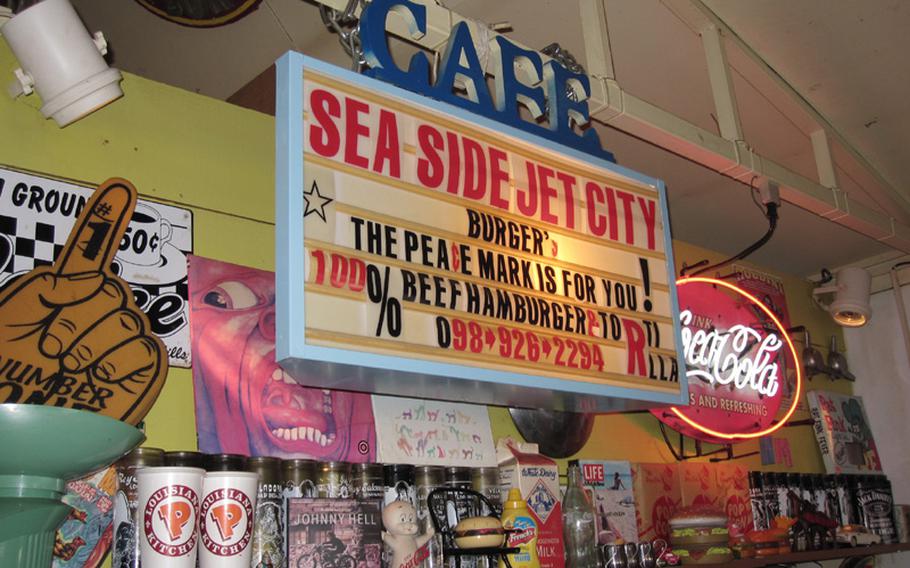 The shelves at Okinawa's Sea Side Jet City Burgers are crammed with American memorabilia. (Matt Orr/Stars and Stripes)

Hungry for a mouth-watering burger?

Sea Side Jet City Burgers is a great place within a five-minute drive from Camp Foster&rsquo;s main gate that you should definitely try.

Feeling hungry and looking for something other than the fast food joints that are on base, I decided to try one of Sea Side Jet City&rsquo;s burgers and wash it down with a nice cold beer.

This small piece of Americana is within walking distance from Okinawa&rsquo;s Araha Beach, which comes in handy if you want a pleasant stroll to walk off some of the hundreds of calories after you have eaten.

The burger joint is neatly decked out in old American wares: license plates from all over the U.S., empty vintage soda bottles, old street signs, motor oil advertisements, even an old Brains figurine from the Thunderbirds, still encased in its original box.

Everywhere you look, the shelves are packed with memorabilia.

The burger menu is as varied as the items on those shelves. Fish burgers, chicken burgers, chili burgers, beef burgers. Some come with Spam, some with pineapple, some with avocado; you name it, this place probably has it.

There are also other things like taco rice, garlic fries, and salad for the healthier among us.

There are two seating areas, an open area and a small indoor area.

It can get quite hot due to the lack of air conditioning, but there are fans located throughout the place to generate a breeze.

Although the food is great, it could get expensive for a family lunch.

Prices range from 580 yen for a burger to 1,500 yen for a set consisting of burger, fries and drink.

There is a kid&rsquo;s meal with a cheeseburger, french fries, small wedge of cinnamon toast, chicken nugget and banana smoothie for 650 yen.

I had a fried chicken &ldquo;karate&rdquo; burger with avocado, pineapple, lettuce and a fried egg. It was huge and I made quite a mess trying to eat it. But it was tasty and steaming hot and went well with the British Bass Ale.

It also came with a hash brown and cinnamon French toast.

There is a wide range of drinks, and if you have room to spare there are some great desserts as well.

When it came time to pay, I was full and very satisfied with the meal.

If I&rsquo;d had the time, I would have taken my own advice and taken a stroll along Araha Beach.