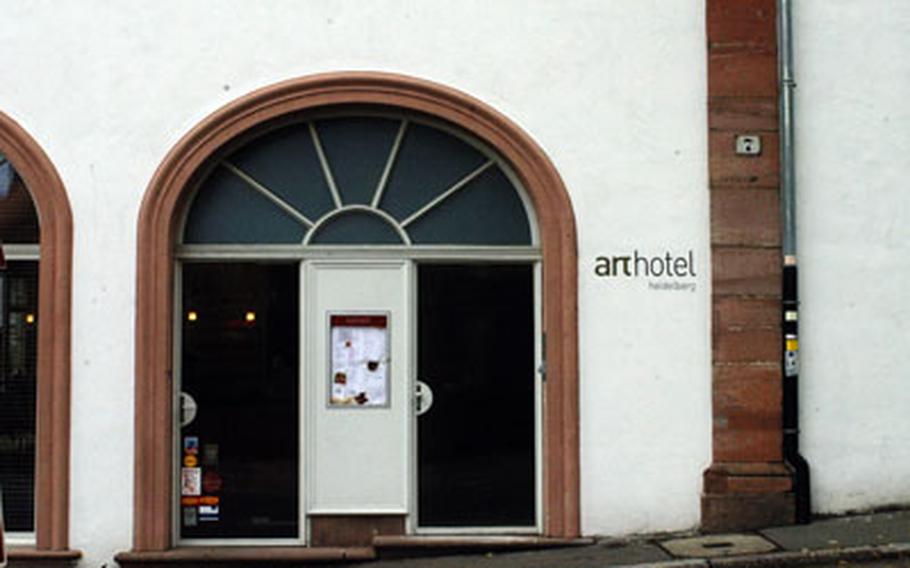 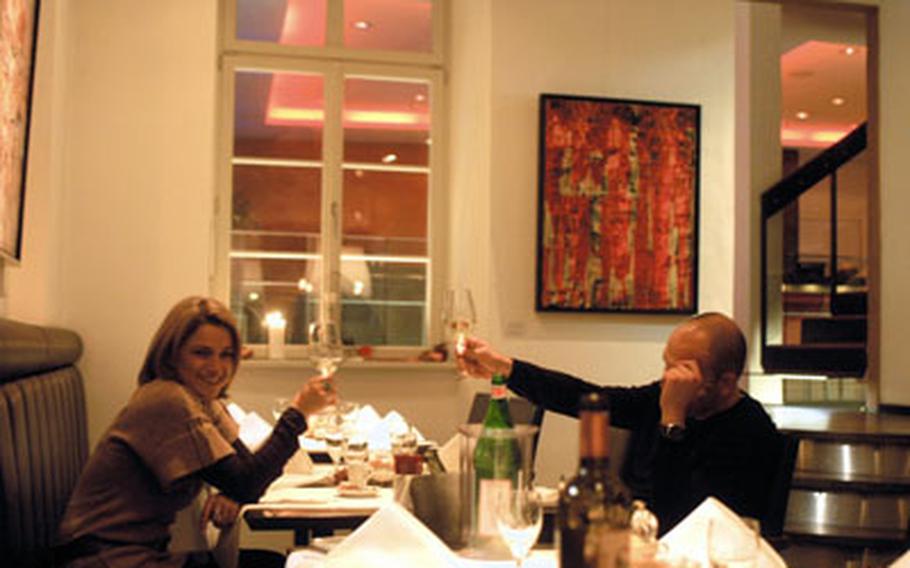 A happy couple toast each other at the Restaurant Romer in Heidelberg, Germany. The restaurant, though a bit pricey, offers a variety of creative dishes and an inviting setting. ()

I had never had a salad named after a beautiful maiden in a Brothers Grimm fairy tale.

But there it was on the menu in the sleek Restaurant Romer in Heidelberg, Germany: Rapunzel salad, in a potato-bacon dressing with croutons.

What could be in it, I wondered. Golden hair? Doubtful. When I looked on the English menu, it was translated as "Lamb&#8217;s salad," which also seemed questionable.

The greens in question were Feldsalat or, in English, lamb&#8217;s lettuce. And it turns out that Rapunzel, the maiden with the long golden hair, was named after another name for the greens by a sorceress, who took her and locked her in a tower to punish the girl&#8217;s father after he stole the sorceress&#8217;s rapunzel for a salad for his pregnant wife.

So I learned something. But more important, the salad, which I ordered with the optional scallops, was just the beginning of a really terrific dinner.

Romer, in the old city across the street from the gorgeous University of Heidelberg library, is within the spiffily modern Arthotel. Its interior is all black leather banquettes, modern art, a red wall, and mirrors and crystal wineglasses glinting in candlelight. It&#8217;s a beautiful room, elegant and urbane, yet warm and inviting.

The menu features traditional German specialties and international cuisine, along with wine suggestions from what is obviously a large wine cellar. (The restaurant also offers wine tastings.)

Continuing with my fairy-tale theme, I ordered the roasted elk, not only because at 28 euros it appeared to be the spendiest entr&#233;e, but also because I do like elk. It was a filet, lean and rare and above reproach.

But my companion&#8217;s seafood trilogy, though 2 euros less, tasted even better. It consisted of wild scallops, king prawns and a fish called Steinbeisser in German and translated to "spined loach" on the English menu. I&#8217;m pretty sure it&#8217;s usually translated as "wolf fish."

Whatever it was, in a saffron-vegetable sauce with braised chicory, it was delicious. And braised chicory? Really good, and not something most people cook at home. Because, what is it?

Which is one of the fun things about the Romer menu. There&#8217;s consomm&#233; from calf&#8217;s tail with liver Sp&#228;tzle, parsnip and butternut pumpkin terrine, duck breast saut&#233;ed in rosemary and honey on fennel salad &#8212; all sorts of creative pairings that work wonderfully together.

But we did have a wonderful bottle of chardonnay, three times the price of two desserts but, I believe, with far fewer calories.

Know a restaurant or entertainment spot you&#8217;d like to see reviewed in After Hours? E-mail John Taylor at: taylorj@estripes.osd.mil

Directions: Restaurant is inside the Arthotel on the old city&#8217;s Hauptstrasse near the University Plaza.

English menu: Yes, although some of the translations are quite curious.