After Hours: Mingo in Tokyo, Japan 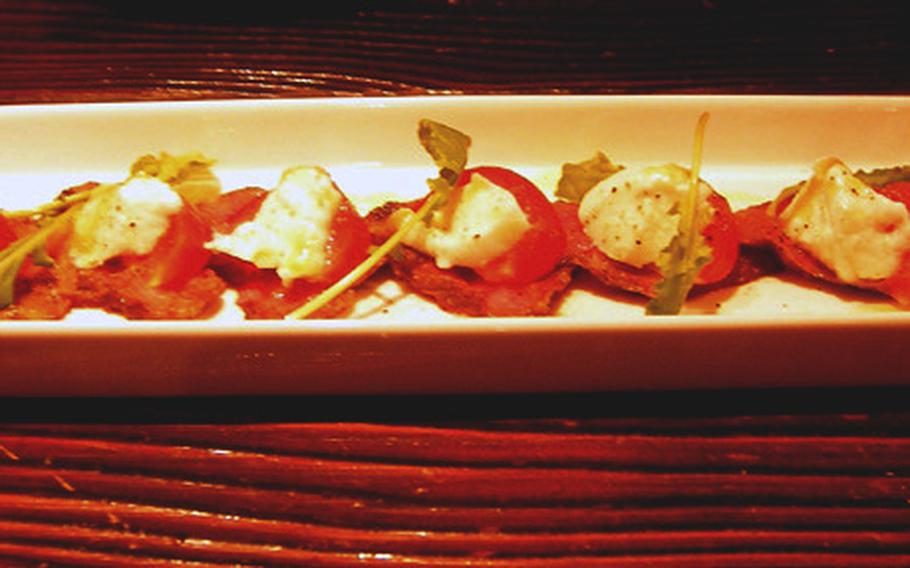 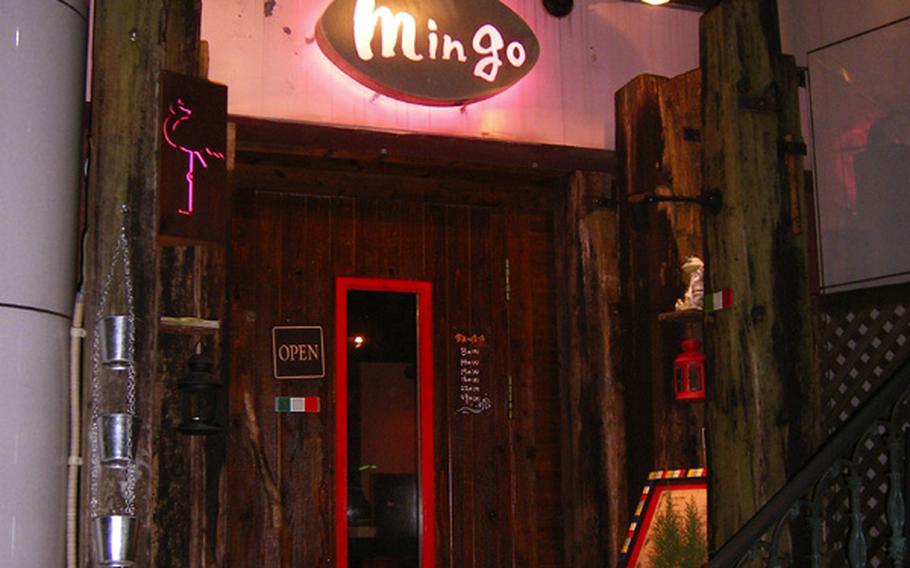 Buy Photo
The entrance to Mingo - tucked away on a side street near Hardy Barracks in Tokyo - is hard to spot, but it's worth the search. (Karen Willenbrecht/Stars and Stripes) 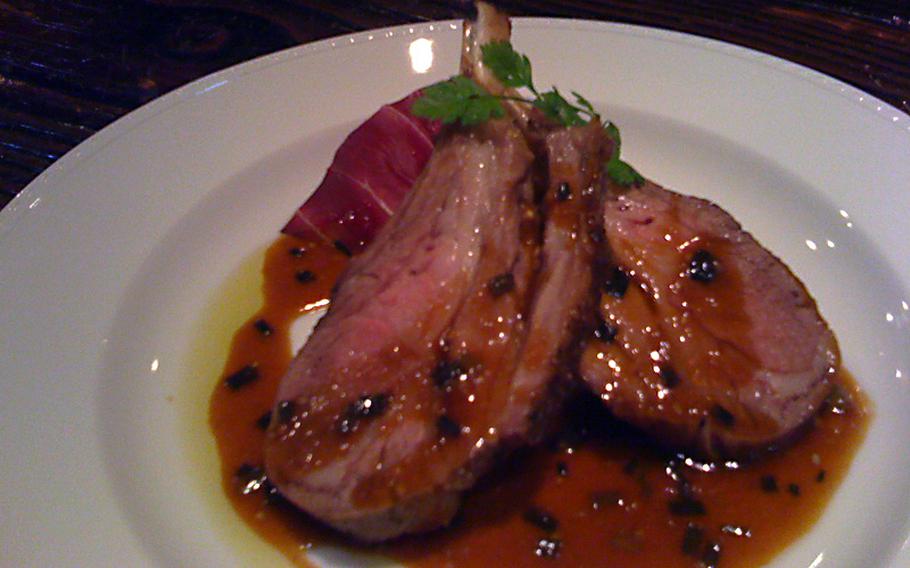 Buy Photo
Grilled lamb with an oriental honey sauce is a winner from the small selection of meat dishes at Mingo, near Hardy Barracks in Tokyo. (Sarah Hall/Special to Stars and Stripes) 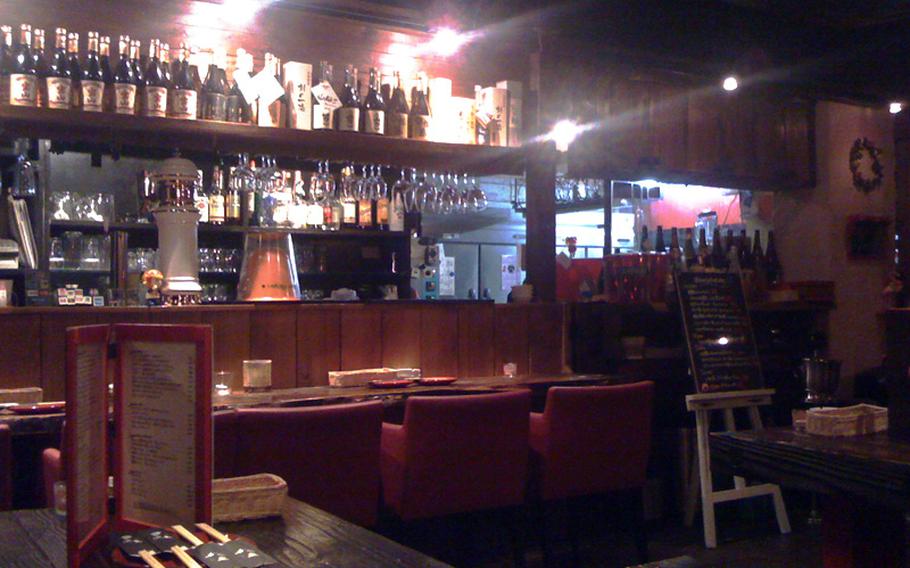 Buy Photo
Mingo, an Italian restaurant near Hardy Barracks in Tokyo, features a full bar that's open until 5 a.m., as well as delicious food. (Sarah Hall/Special to Stars and Stripes) 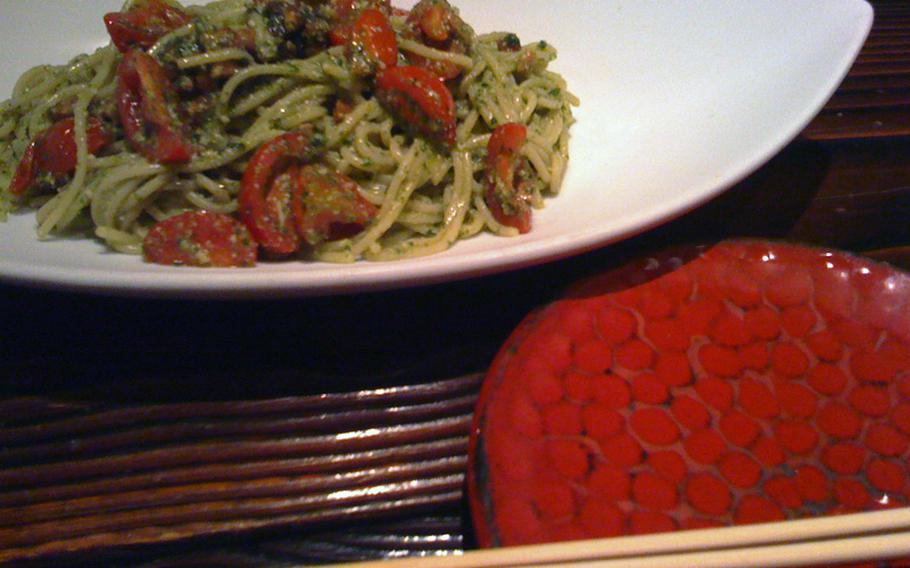 Staying at Hardy Barracks for a night out in Roppongi? I beg you &mdash; skip TGI Friday&rsquo;s and Outback Steakhouse. Instead, start (or end) your evening at Mingo, a tiny jewel serving delicious food just steps away from the gate.

Mingo (short for flamingo) offers traditional and not-so-traditional Italian fare. For purists, there&rsquo;s the usual assortment of pizzas, pastas and risotto; other dishes, such as a seared tuna and avocado salad, make good use of Japanese ingredients.

We started our meal, as always, with our favorite antipasti &mdash; tender wagyu beef slices served caprese-style, with cherry tomatoes, blobs of mozzarella, and a peppery dressing that gives the dish a flavor I can&rsquo;t quite identify or re-create but I crave it for weeks after a meal there. This dish doesn&rsquo;t appear to be on the English menu, but on the Japanese menu, it&rsquo;s fifth from the bottom under Antipasti; if you don&rsquo;t speak Japanese, just point.

We followed that with a more traditional pasta &mdash; a homemade tagliolini with Genovese sauce and chunks of slow-cooked bacon. The waitress offered us the option to have our pasta served cold, and since it was nearly 100 degrees outside, we somewhat skeptically accepted. This turned out to be a great decision; the chilled noodles were refreshing, much like eating cold soba, and the basil sauce kept the dish light. I&rsquo;m also partial to the penne with gorgonzola, but the rich cheese sauce makes it better suited to cold weather, when you want heavy food and don&rsquo;t mind that the serving probably has 4,000 calories.

For an entr&eacute;e, we had the savory grilled lamb chops (amusingly mistranslated as &ldquo;grilled ram&rdquo;) with an oriental honey sauce. The meat and fish selection is small &mdash; just six dishes, plus a couple of daily specials &mdash; but the lamb and the roasted chicken are both well-executed.

Mingo has its cooking and service down pat &mdash; I&rsquo;ve never had a dish that wasn&rsquo;t amazing &mdash; but it could use some help in the marketing department. It&rsquo;s tucked onto a side street with almost no foot traffic; its front door is half-hidden behind a stairway; and it doesn&rsquo;t advertise in expat publications. The lack of promotion is evident; if you arrive before 9 p.m., you&rsquo;ll probably have the place to yourself.

That&rsquo;s too bad, because this really is a terrific restaurant in a terrible location &mdash; the neighborhood chews up and spits out restaurants like Cookie Monster on a bender. So please. Skip the chains. Help keep Mingo in business. Otherwise, how will I get my beef caprese fix?

Location: Tokyo, Japan. 1-10-16 Nishi-azabu, 1F. From Hardy Barracks, go straight out the gate, cross the street and walk through the parking garage. Go up the steps at the back of the garage and walk up that street. Make your first right; Mingo is on the left, halfway up the block.

English menu: Yes, but you&rsquo;ll probably have to ask for it

Web site:www.mingo.co.jp (mostly Japanese, but the pictures are pretty)