The Maharaja, an authentic Indian restaurant on the main street of Homburg, Germany, has a good reputation among locals and English visitors, who have eaten at the curry houses on London’s Brick Lane. (Photos by Seth Robbins/Stripes)

The Maharaja, an authentic Indian restaurant on the main street of Homburg, Germany, has a good reputation among locals and English visitors, who have eaten at the curry houses on London’s Brick Lane. (Photos by Seth Robbins/Stripes) 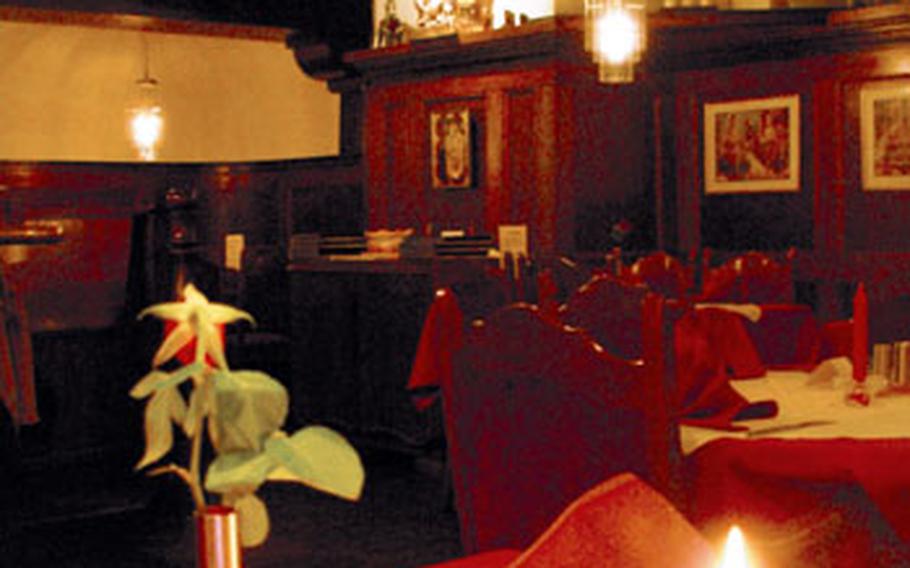 The restaurant, with about a dozen tables, is small but popular. ()

The German word for spicy, scharf, is peppered in Som Dhingra&#8217;s conversations at Maharaja, his authentic Indian restaurant in Homburg.

The avuncular owner, who has lived in Germany for more than four decades, knows that Teutonic taste buds reared on schnitzel and Sp&#228;tzle are not attuned to the hot stuff.

If you ask, though, the dishes can still be prepared spicy. And when I finished my tandoori chicken, marinated for more than 24 hours in several spices and yoghurt, my sinuses were cleared.

Dhingra serves dozens of dishes from all parts of India, including many staples: samosas stuffed with vegetables or minced meat; several colors and various types of curries; and the unmistakable naan flat bread. Also, if you happen to be a vegetarian &#8212; difficult in the land of wurst &#8212; there are more than a dozen offerings on Maharaja&#8217;s menu.

For those who are familiarizing themselves with Indian food, or just very hungry, the Tellers (special plates) are a good option, each with generous portions of three different dishes. The Maharaja Teller, with curried lamb, chicken in almond sauce and spinach with fresh cheese, along with bread and rice, is delicious and balanced. The Gola Teller offers three different curries.

As a starter, there is papadum, a flat bread crisp that can be dipped into sweet mango chutney, coriander or a yoghurt dip.

The tandoori chicken, served on a sizzling plate, was juicy, which is rare for a chicken that can be dry. And it was smothered in a tandoori masala, a burnt orange sauce that gets its color from red chili peppers.

When asked what his specialties are, Dhingra said, "Everything is the best."

"All the ingredients come from India," he added, "and all the dishes are prepared fresh."

The restaurant, with about a dozen tables, is small but popular. It has a good reputation among locals and English visitors, who have eaten at the curry houses on London&#8217;s Brick Lane. I suggest calling ahead to make reservations if you plan on going with a large group.

My dinner for two came to about 35 euros, and that included two glasses of wine. There is also a less expensive lunch menu served during the week.

Dhingra, who waits on many guests himself, was originally a machinist in a factory that made children&#8217;s seats. When it closed, he bought the restaurant.

"He wanted to own something," said Nitin Sood, Dhingra&#8217;s son-in-law. "It was always his dream to own an Indian restaurant."

Directions: Exit Autobahn 6 at Exit 9-Homburg and then take the left onto B423 toward Bexbach. Stay on B423 for about two miles and then turn left at L119 and head toward Stadtmitte, the city center. Continue to a roundabout and take the first exit onto Am Zweibr&#252;cker, then the first left onto Saarbr&#252;cker Strasse. Parking can be difficult because the restaurant is on the town&#8217;s main street, but there are two nearby lots, which are in walking distance.