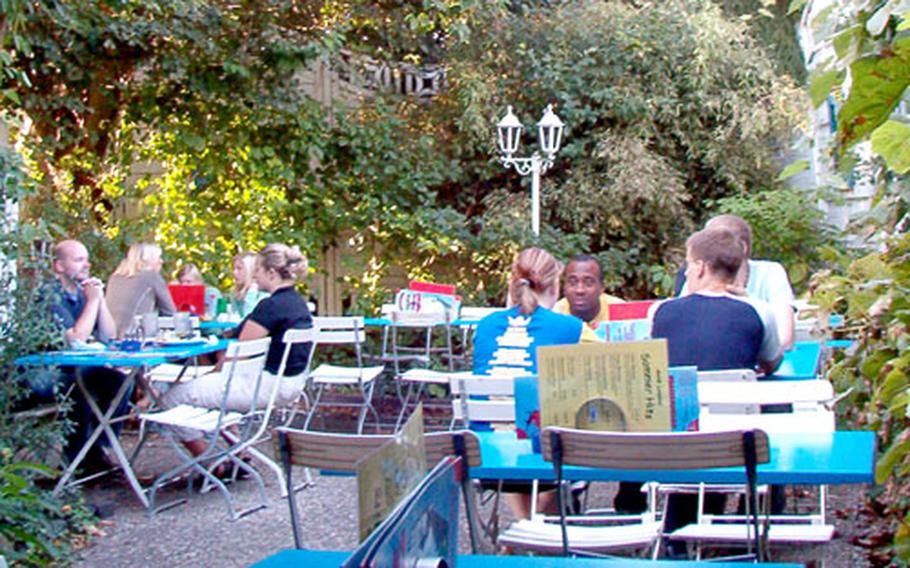 The biergarten in the back of the Antik Lokales is the perfect place to have a brew and wait for your pizza. (Sam Amrhein / S&S)

Sure, you can get pepperoni and onion, but why would you?

The menu starts with the simple pizzas &#8212; salami, Margarita, etc. Then, things get interesting.

For example, try the Zombie pizza, which includes green pepperonis and &#8220;zombiesauce.&#8221; The waitress, whose English was much better than my German, told me that zombiesauce was chili.

Or how about the Madagaskar? That comes with ham, green peppers and cocktail sauce.

Want fish? Well, you get the picture. If you want it, Antik Lokales probably has it.

Prices for this plethora of pizzas runs 5.30 euros for a salami to 7.80 euros for a Schibulski &#8212; pepperoni, gorgonzola cheese, fresh tomatoes, fresh garlic and spinach.

Located on Heidelberger Landstrasse, the restaurant doesn&#8217;t look much like a restaurant. It looks like, well, an antique shop. The inside is full of wooden tables and old wooden floors. You can belly up to the bar, or if you weave your way to the back of the restaurant, you&#8217;ll find a quaint biergarten. You can sit in the sunlight enjoying a beer or an apple wine.

If you&#8217;re not hungry for pizza, then go somewhere else! Yes, there are things on the menu besides pizzas, including spaghetti and schnitzels.

But with 145 choices of pie, do you really want the schnitzel?

Food: Pizza, pizza and, oh yeah, pizza. There are 145 varieties on the menu.

Location: Heidelberger Landstrasse 258-260. Directly across the street from the Kirche tram stop in Eberstadt.