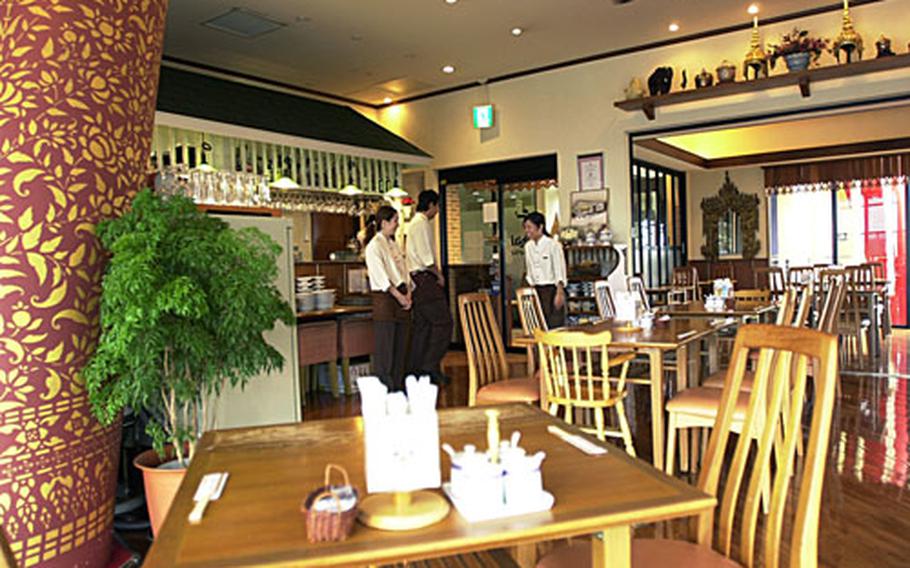 Jai Thai is a relaxing Thai restaurant tucked away on the second floor of Carnival Park Mihama in American Village in Chatan, Okinawa. (Cindy Fisher / S&S)

The name means &#8220;heart of Thailand.&#8221; Having never been to the country I can&#8217;t vouch for the claim, but I can say with confidence that the restaurant is a relaxing and enjoyable experience.

Jai Thai is on the second floor of Carnival Park Mihama &#8212; the building with the Ferris wheel. Finding Carnival Park is easy, but the restaurant is almost hidden in a back corner &#8212; so follow the signs to stay on course.

Once you find it, the soft, faintly foreign music and exotic scents that waft throughout the airy room set the stage for a relaxing meal. A wall of windows and plenty of cozy tables for two give the restaurant an intimate flair.

It&#8217;s the perfect place to settle in for good conversation while eating.

The staff is attentive but doesn&#8217;t hover. On my visit, I took my time going through the menu to make heads and tails of dishes with names like phat phet, phat khimao and kaeng par &#8212; all without someone constantly asking if I was ready to order.

Within minutes of ordering, the soup &#8212; complete with carrot slices carved into stars and hearts &#8212; arrived at the table.

Then came the salad, and that is where I ran into cultural differences. I kind of expect salad to have lettuce in it somewhere. Not here. The mixture of sliced and diced things &#8212; I know there was onion and carrot in there but I couldn&#8217;t identify anything else &#8212; was very spicy. And tasty, too, once I let go of my yearning for something green.

Maybe next time I&#8217;ll get really adventurous and try that kaeng par.

Drinks: The beer selection is mostly Japanese brews, including Okinawan favorite Orion. Prices are from 450 to 630 yen. The cocktail list is varied. Most are priced at 630 yen. There&#8217;s a wine list, too.

Menu: Some English, but mostly Japanese with photos.

Dress: Casual dress is fine for lunch, but dinner is slightly dressier.

Clientele: Even mix of Japanese and American.

Directions: In American Village. When traveling from the Camp Foster commissary gate, turn right onto Highway 58. Continue down Highway 58 and look to the left. When you see the big Ferris wheel, turn left down any of the streets in the vicinity, heading toward the Ferris wheel. The restaurant is on the second floor of Carnival Park Mihama.