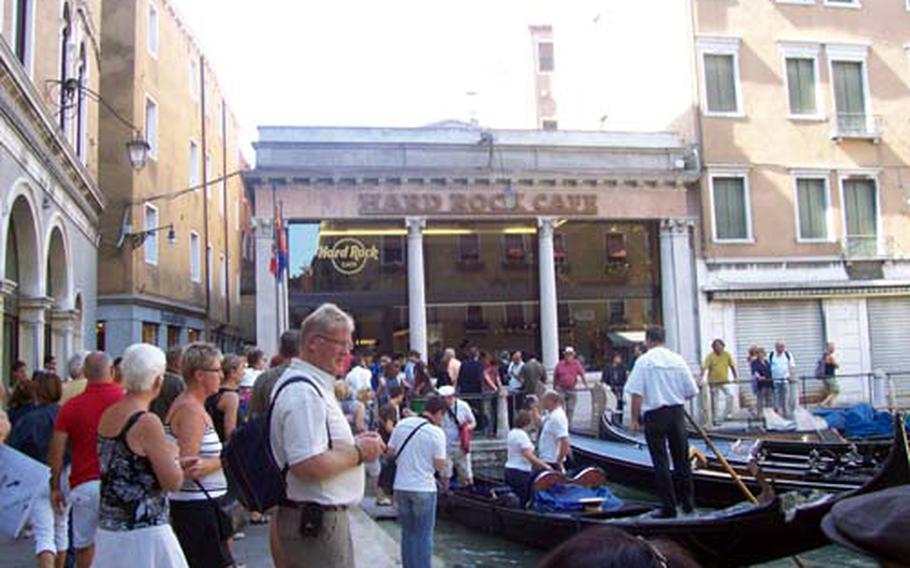 Buy Photo
The Hard Rock Cafe Venice opened in April along the city’s canals and on the banks of one of its gondola drop-off and pick-up locations behind St. Mark’s Square. (Mark Abramson/Stars and Stripes)

A taste of Americana can be found in a rather unlikely place: a prime location behind St. Mark&#8217;s Square in Venice.

Venice, about 45 minutes from Vicenza, Italy, and a little more than an hour from Aviano Air Base, is considered one of Europe&#8217;s most beautiful cities. The Hard Rock Cafe is a big draw for tourists who come to see the city and are looking for a reprieve from the pizza, pastries, pastas and other Italian eats found there. As a result, the restaurant is packed during later parts of the day.

According to its Web site, the Hard Rock Cafe Venice opened in April and is the smallest of the chain&#8217;s restaurants in Europe. It is one of several Hard Rocks that have opened recently or are scheduled to open in the coming months around the world.

The restaurant&#8217;s decor includes glass made at Venice&#8217;s famous Murano glass factory, and the walls and display cases of the downstairs bar feature items from the world of rock. Among them is a handwritten contract signed by members of Metallica, a Rolling Stones guitar, a jacket worn by Johnny Rotten and drafts of song lyrics. Several flat-panel televisions playing music videos dot the walls as well.

The restaurant&#8217;s exterior, a two-story glass fa&#231;ade framed by Roman columns, is a far cry from the bright-colored or crumbling buildings in other areas of Venice. Its color makes it look like an extension of the buildings surrounding it.

Hard Rock Cafe Venice overlooks a gondola pick-up and drop-off area where diners can watch the boats cruise along one of the city&#8217;s canals from its second-floor, balcony-style seating. When I was there, the place was in a bit of a tizzy with people scampering around to see Paris Hilton prance by with a bodyguard in tow.

The food is not too shabby and the portions are enough to fill you up. The hickory-smoked chicken wings are as tasty as they are messy &#8212; the one napkin the servers give you just won&#8217;t do. Add in some tangy barbecue sauce &#8212; a bit on the watery side &#8212; and you have one delicious meal for just 9.95 euros. Onion rings for about 4 euros with the same barbecue sauce make for a nice side.

Some of the souvenirs offered up in the Hard Rock&#8217;s signature shops in its restaurants are pricey as well. A Hard Rock Cafe T-shirt will cost about 26 euros.

Location: On Calle Frezzaria in Bacino Orseolo San Marco. The cafe is to the left of the basilica and the campanile, the 325-foot bell tower (can&#8217;t miss it).

Food: A wide variety of burgers and other sandwiches, chicken, fajitas, nachos and fries, as well as steaks, ribs and grilled salmon.

Prices: Pricey, but not as expensive as many of the nearby restaurants.