Buy Photo
At the Fogo Grill in Pyeongtaek, South Korea, owner Adriano Dos Santos De Lara gets ready to bring a skewer of steak to a customer’s table. Fogo specializes in all-you-can-eat Brazilian barbecue, serving nine meats one after another, then keeping the meats coming until the customer’s had enough. (Photos by Franklin Fisher/Stars and Stripes)

Buy Photo
At the Fogo Grill in Pyeongtaek, South Korea, owner Adriano Dos Santos De Lara gets ready to bring a skewer of steak to a customer’s table. Fogo specializes in all-you-can-eat Brazilian barbecue, serving nine meats one after another, then keeping the meats coming until the customer’s had enough. (Photos by Franklin Fisher/Stars and Stripes) 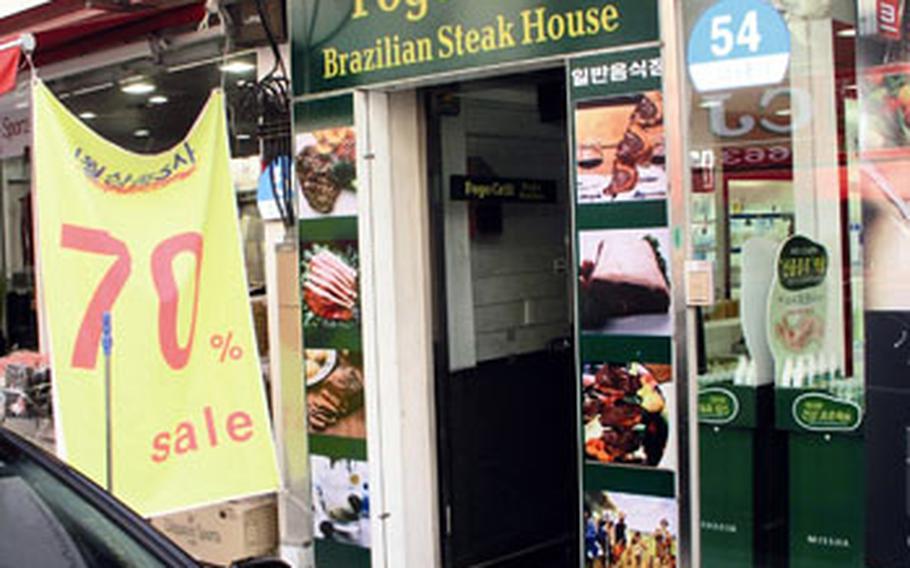 The Brazilian bossa nova influence in jazz &#8212; "The Girl from Ipanema," for example &#8212; so we were all the more intrigued on hearing there was a new Brazilian steakhouse in town, near Osan Air Base.

Although we enjoy a good steak or chop, we usually make a point of eating red meat only once in a while, the better to fend off calories and cholesterol.

But this sounded well worth looking into.

So on a recent sunny day, we went for lunch at the Fogo Grill to see why an airman we know was said to have gained three pounds from a single encounter with the all-you-can-eat barbecue.

Inside were dark brown wooden chairs, and tables covered with white plastic tablecloths. The Brazilian flag hung on one wall, and the American flag near the cash register. Nothing fancy about the appearance. It seemed to be about the barbecue much more than the decor.

When you&#8217;ve gone through the first round of nine, the next go-round starts, and will continue, all you can eat.

We liked the meats, although some cuts more than others. Anything that was thinly sliced, moist and tender, we liked, although it tended to be salty. Thicker cuts of beef we found less flavorful, and lacking distinction. One slab of thick meat steak seemed to taste pretty much like another.

We especially liked the chicken, though it also had too much salt.

But we enjoyed the barbecue nonetheless. And there was certainly plenty of it. More than we wanted to try to put away in one sitting.

An employee drew up to a nearby table, put vodka, orange juice, cinnamon, kiwi and banana in a frying pan, ignited the contents in a sudden whoosh of flame, then poured the fragrant concoction over a block of vanilla ice cream.

It made our day.

We might well try the meat again sometime at the Fogo Grill, but the banana flamb&#233; was so satisfying, we may go back just for that.

Know a restaurant or entertainment spot you&#8217;d like to see reviewed in After Hours? E-mail Karen Willenbrecht, Pacific After Hours editor, at: willenbrechtk@pstripes.osd.mil

Directions: From the Osan Air Base main gate, cross the street into the Shinjang mall and walk straight about two to three minutes to the railroad tracks. Continue past the tracks for 20 or 30 yards. On the right, you&#8217;ll see the entrance to the Fogo Grill, which is on the second floor.