After Hours: Delizioso may satisfy your pasta craving 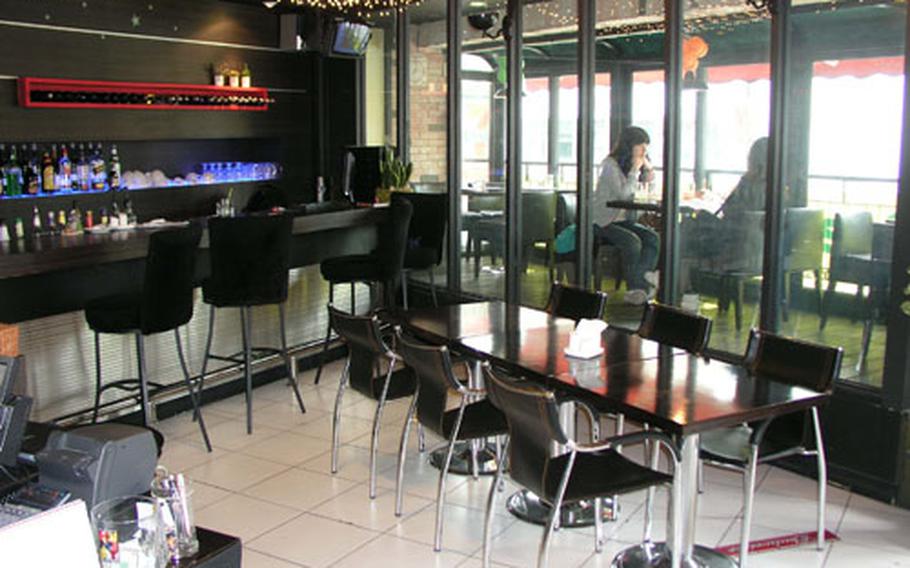 At Delizioso pasta house, just outside the main gate at Osan Air Base, South Korea, you can eat your spaghetti at the bar or on the enclosed patio that overlooks the Shinjang shopping mall. (Franklin Fisher / S&S)

OSAN AIR BASE, South Korea &#8212; If you&#8217;re in the mood for spaghetti dishes and aren&#8217;t looking for a decorous atmosphere or the last word in culinary excellence, 4-month-old Delizioso might be right up your alley.

Delizioso has a bar, a small main dining area near the bar, and, in a separate enclosure, a row of tables that look out on the ever-bustling junction of the base main gate and Songtan&#8217;s Shinjang shopping mall.

Owner Kim Hae-sook, 30, a former bartender, runs the pasta house with her husband Lee Jong-ho, 30, who serves as chef. When we dropped in for lunch recently, he was doing double-duty as a waiter. They have waiters working at night.

Also on the menu are salads, soups and appetizers, including yakimandu (fried Korean dumplings).

Our dish of spaghetti with sausage in tomato sauce was served with two slices of garlic bread. The meal was filling and not unsatisfactory. But the tomato sauce struck us as a bit thin and the sausages bordering on bland. Sausages with stronger ingredients would have gone a long way to give the dish a character and authority it lacked.

But ravioli with grilled chicken, and spaghetti with mushrooms and bacon in olive oil have been gaining popularity among the U.S. servicemembers who make up about 80 percent of her customers, Kim said.

Kim speaks a serviceable English and was able to easily field our questions about what was on the menu.

Location: Directly opposite the Osan Air Base main gate above the 7-Eleven convenience store.